Tales from the Hill Village Part 3

Brother in law no 1's wife came into the wife’s shop today and bought a pack of Durex. I said to her in the little Thai I know mai ow dek? My sister in law ignored my comment so assuming she was shy I said nothing else. Apparently she went to where her husband who was drinking with his mates was and proceeded to open it causing great hilarity amongst his mates. Apparently she didn't know what she had bought. It just looked interesting and she had bought it on impulse. If you recall from previous submissions she has stopped taking the pill as she wants a baby. No success so far.

Apparently assuming my wife is telling me the truth, father in law earned 200,000 for his 50 rai of corn, a lot less than wife told me he should get only a couple of months previously. So I actually did get my money back but no profit as sponsors are supposed to make money, not just break even. Blood is thicker than water as they say.

The wife told me that father in law had lent some Thai guy 50,000 baht, amazing considering he never has any money. He has already borrowed 2,000 baht from me as he went off to attend one of his friend’s funeral.

My thieving, lying, cheating, ugly, sister in law has returned to the village on a flying visit. Her other lesbian half has also returned to the village to be with her. My mother in law who has been living in my house despite me buying a house for her has moved out for the last few nights to stay with her other daughter. When I have seen her around she is very happy, presumably sister in law has given her some money. We have not been invited but sister in law has been holding court, buying food and drinks for everyone and being the Queen Bee. All this is from second hand sources so cannot be absolutely sure of the truth. Apparently she is working in Phuket and has found a rich farang who wants to marry her and is giving her lots of money. He has also promised to buy her a car in April. She has paid off the debt she owes the village and some other debts. Her farang boyfriend is coming back in April to see her. WATCH OUT, you are going to be fleeced and eventually dumped for her lesbian lover. Not a satang for the farang who she owes loads of money too. My daughter met the sister-in-law, she gave my daughter 50 baht and said when she is rich she can come and live with her. Unfortunately I don't know the nationality of the farang involved. I may well have a dilemma. If I get invited to the wedding do I tell the poor sod before he marries and earn the undying hatred of sister and mother in law or do I let him suffer for the sake of the family. I probably won't go if invited and leave him to his fate. And then tell him if and when I ever meet him. Even if I was to meet him before the wedding he would not believe me and just think I was jealous or something similar.

Apparently I discovered what my sister in law did with some of the money she stole from me. She was sponsoring the local women’s volleyball team. Apparently after the match they would come back for drinks and she also bought the team a volleyball kit. Maybe it was to convert some of the ladies to her way of thinking! Many Thais seem to want to show off to everyone else when they have money.

My mother in law moving out to be with her other daughter has given me an opportunity to be rid of her. I have persuaded the wife to move our two children into the room she was using. With a little bit of luck I may be able to stop mother in law moving back in again. Bliss!

The mother in law is a bit crazy and is always talking to herself. The other annoying thing she does is getting up at the crack of dawn and using a pestle and mortar at 6 AM making a massive racket, waking me up whilst preparing her breakfast.

About a week later the mother in law has found out that the car is in my wife’s name and is furious. A couple of days later she took 500 baht from our shop. I went in to a rage with my wife telling her I can't keep bankrolling the shop and that it has to pay for itself. My wife asked for the money back and World War 3 has started. The mother in law repaid the money she owed me for sponsoring her vegetables (normally sponsors get a large profit, my profit is to get my money back!!) and has told us she won't let us use her engine to water our vegetables. We grow fak maeo, a vegetable that looks like a large pear and we cut the new shoots and harvest it every 4 days to feed you lot in Bangkok. 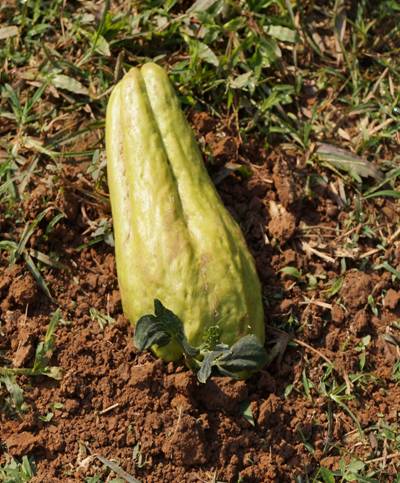 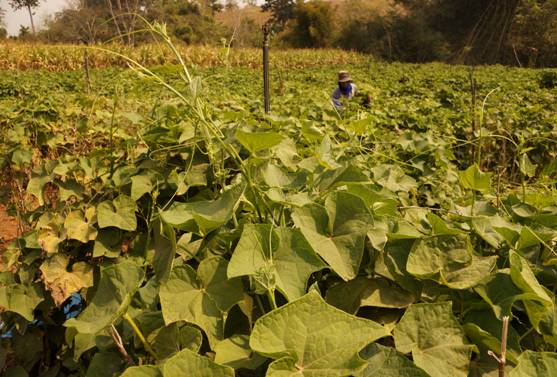 Fak Maeo growing on the farm

It provides a nice little income for the family. I have even started growing fak maeo in our back garden. We have had to go and buy our own engine and watering equipment. Then she went into our garage removed all the rice polishing. It was her rice but my wife paid for the rice to be processed. When my wife found out she ordered me to put the rice polishing back in our garage, she paid for the processing so it belongs to us. Then the mother in law has threatened to destroy our crop unless we give her 100,000 baht. The crop is grown on land next to her farm although the land is owned by the father in law. Amazingly I persuaded my wife to go to the police so it is on record that she has threatened to destroy it and the police will arrest her if she does. She doesn't know we have been to the police but she will find out if she carries out her threat. She has moved all her clothes out of my house so we are now free from her. Hooray. So we have a massive family squabble with mother in law, my evil sister in law and one brother in law on one side, father in law and my wife on the other and 2 brothers in law who very sensibly are remaining strictly neutral. 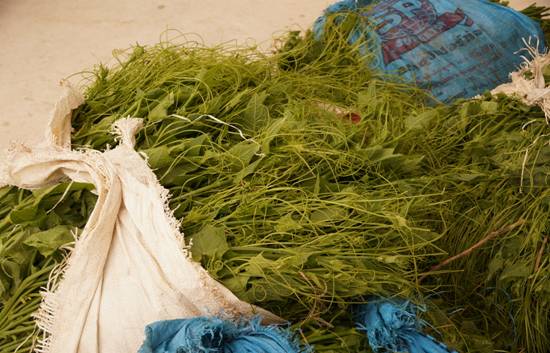 Fak Maeo waiting to be transported to Bangkok


My mother in law is refusing to let my father in law use his own land, so we are going to rent some land to grow corn. My wife has started working 35 rai which is some distance from the mother in law and belongs to the father in law and which has lain fallow for several years. In fact it is the land she used to work before she married me and it is in a very pretty setting. 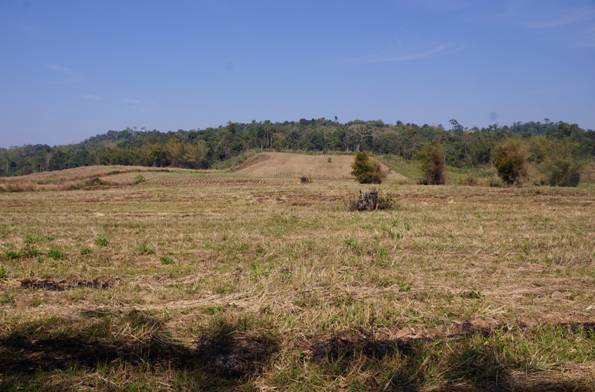 35 rai of land for corn growing

I am doing my bit for the social services here in Thailand. There is a young lad of 11 years who has already spent time in prison for stealing. My father in law has befriended him, and he is a drop-out from school at 11 years old. No one in the village wants anything to do with him including his own family. I have been employing him to help me grow fak maeo in the garden. He doesn't speak a word of English and my Thai is very limited so communication is difficult. We are hoping to reform him into a responsible young man. Because of his earlier escapades I have to watch him like a hawk so it pushes my stress levels up but am hoping he will become very useful to us. I find he turns up and disappears in an instant, he is very nimble and a quite likeable and willing young lad.

We bought some land a couple of months ago but have only just taken possession or it as you always let the seller collect his crop before you take possession of it. When we went there we found a bomb in the middle of the field. The seller forgot to tell us he had a bomb in his field. Apparently it is from the communist insurgency period which ended in the 1980s.

My wife’s cousin got married last year and has had a baby. The father has now disappeared leaving my cousin husband-less and she has had to return home. Husband has disappeared. Apparently he has been married before and has possibly gone back to his previous wife. Why do Thai men do this?

My buffalo are growing nicely now, we were going to go for artificial insemination of the cows but our partner reports that the oldest bull (although still quite young) has been doing what comes naturally with the females so we will rely on nature. I don't know whether he has done it with his mum and committed incest. We will find out soon. We have 5 females and 2 males so hopefully will have 5 new ones in about 10 months time.

A couple of days ago we were told by the guy looking after the buffalo that we have a new addition to the family. Unfortunately it is a male so once he is fattened up, it will go for sale. I haven't yet seen it so no photo yet.

The 11 year old lad who is helping us is obviously on probation. I only found out because a car turned up with a man and woman and it had probation service in English as well as Thai on the side of the car.

I really hope you're happy living up there. With all of this stuff going on, your time in what is supposed to be a peaceful slice of paradise sounds more to me like one long headache!

Doing All The Wrong Things - But With The Right Person!

Pattaya and Thailand, My Opinions and Observations