The People and Work

The readers of my first submission on Catbalogan got an overview of this remote Filipino city as well as some anecdotal stories about settling here. In this story I will focus more on the people resident here. I have read much about the awful crime rates in the Philippines, but I have found if that is indeed true it must have have somehow escaped this smallish city. While I have heard stories of pickpockets, corrupt government officials, and other small, non-violent crimes, there is no talk about serious crime of a violent nature. That said, I remain careful with the amount of cash I carry and the places I travel. I have found many to be quite honest and most, but not all, make no attempt to over price for a Western man.

Most of the people here are proud hard working folks that do not display a desire to acquire anything that they have not earned. This is quite interesting as Catbalogan in the second poorest city in the Philippines. Wages are quite low from about $62 a month for a salesperson to $440 for a school teacher or policeman. The sales people are thick in almost every store and quite willing to be as helpful as they can. They are very polite addressing me and my girlfriend with sir and mam. If their store doesn’t have what you are looking for they will be happy to recommend a competitor.

There is great respect and curiosity about western men, from both males and females. One early evening on my walk I heard a call from across the street “Hey Joe” (A term for us that I remember hearing in Subic Bay over 40 years ago) I walked to the other side of the street to visit the man that called me. I introduced myself to him and he, in turn, introduced me to the Barangay Captain. I offered a handshake that was heartily accepted and was careful to show respect to this man, addressing him as “sir”. The visit was brief but apparently well received by these men. They just wanted to meet me.

As I later discovered a Barangay is the smallest level of government in the Philippines, with designated neighborhoods and elected officials. A Captain is the top official in each Barangay. The Captain will mediate the small disputes and act much the same a the Headman in a Thai village. Catbalogan has over 40 Barangays. I was impressed that this man wanted to take the time to meet me. I was happy that I showed him respect, but it is generally my nature to be respectful, until I am given reason not to be.

Most of the residents speak the local dialect of Waray-Waray as well as Tagalog, the national language. Many also speak English to a fairly high degree. In my impression, they either speak English or not and if they do it is possible to have an intelligent conversation. I have met many bright, quick people here. Some with a surprising knowledge of world economics and politics. I would not normally expect to find a sophisticated conversation here, yet I do frequently. Even some children had a knowledge level about the same as a US student and were very curious about my views. While I have no knowledge of the educational system here and its quality, it seems to be very good from what one would consider to be a third world society. This opinion is based on a few conversations with students and a chat with a teacher, who spoke perfect, accent free English. While I cannot make a sweeping judgment the fact that I found a few bright, and well informed minds leaves me with the belief that the schools are at the very least providing some quality instruction.

Among the most visible of the working population are sales people, laborers, trike drivers and security guards. It is likely to discover the store you are shopping in has more sales people than customers at any given time. My girlfriend says this because of shoplifting, but I think that perhaps the very low pay rate of just over $60 per month encourages the hiring of more clerks. Every encounter I have had with these clerks has been positive. The laborers work long hard hours of sometimes back breaking work for little pay with the going rate at about $7 per day. You find among these workers skilled craftsman who can do electrical wiring, carpentry, and other crafts with real skill. Security guards, usually armed, are found at the doors of many businesses. They will often stand at the door and open and greet every customer. If you have a larger bag of goods they will assist you and place the bag in your transportation. For me, it is hard to work out why a small bakery needs a security guard.

The trike drivers provide the largest part of public transportation in Catbalogan. For the uniformed a trike is simply a 2 wheel cycle with a side car that will accommodate 2 (or more) passengers. At the least of these vehicles is a simple bicycle with the attached side car. These very sturdy men pedal their riders around mostly the downtown area. Some put in six, 12 hour days. One man put 3 of his children through university with his earnings from his pedal trike. Equal in number are the small 2 cycle motorcycles with an attached sidecar for 2 or more passengers. The largest of these vehicles has room for 2 in the front and 4 in the back for a total of six or more as the case may be. They will make multiple stops to accommodate their passengers. If the motorcycles have a larger motor to move these passengers it isn't much, I can't really determine if indeed they are larger. The trikes are by far the largest number of vehicles one sees here. At times trikes are the only visible vehicles on the street. I would estimate the number of cars I have seen at much less than 5%. The trike fare is very reasonable with a range from $.12 to $.74 per ride. The average charge seems to be about $.36, but it depends on distance and the number of passengers with you. A good operator can earn about $7 to $8 a day.

The ride for a passenger is not exactly smooth with the streets paved in a cobblestone like surface. The occasional rough spot is handled well by the driver who makes attempts to move around it. Overall, the ride is not too bad. The traffic is managed by what I would refer to as the “beep and weave” A motorcycle trike will overtake a slower moving pedal style with a beep of his horn, meaning I am going around you. The weave will be around oncoming traffic that will slightly slow to accommodate the pass. Then a singe motorcycle will pass the motorized trike in the same “beep and weave” fashion. It really works rather well as everyone understands the rules and drives accordingly.

I have not quite worked out the fare schedule for trike transportation, but in my experience almost everyone has been honest. On one occasion I was charged $.49 when I thought it should have been $.37, but I am not quite sure and I simply will not quibble over $.12. The trikes have been my primary mode of transportation and there is never a problem locating one as competition is intense for passengers. I don't believe that safety is much of an issue as speeds seldom exceed about 15 MPH and the drivers demonstrate real skill.

A labandera (labandero if male) is a woman that will do your laundry. Your clothes are hand washed and rinsed twice to remove any remaining soap. It is then carefully hung outside on hangers to dry. The next day the labandera will return and carefully iron, fold and put away your clothes. The work produces very clean and well finished clothing. At a cost of about $5 a week (plus a snack) for a family of 4 this is a real bargain. Many are keen to secure this work so it is very easy to find a skilled, willing worker. Our labandera (or labandero if you prefer), is my girlfriend's ladyboy brother. She washes dishes and cleans the already clean floor as well. My impression of this job is that it is flat out hard work. Our labendra worked hard for at least six hours straight with just a quick break for lunch. Oddly, my girlfriend has a washing machine of sorts but that was not used as it was considered inferior quality to hand washing.

Many residents put together a living by working odd jobs, when available, or run a small “store” where a mix of items are sold at generally low prices for small quantities. For example cigarettes are sold singly and called a stick. Eggs and other items are sold singly, but mostly it appears that a lot of candy and other junk food is on offer. My girlfriends older brother is a computer expert and works independently with some of the numerous internet cafes. He also will drive the trike that is owned by my girlfriend looking for fares. My impression is that he does fairly well with his computer work, when he gets it. All here seem to at least get by in some fashion or another. There is little industry here and real, regular jobs are just not available. When they are wages are low. For example a certified teacher with a Masters Degree was offered just over $440 a month.

Poverty here is in your face. If you come from a Western country you would need to re-define your definition of poverty. Among the homeless are about 2 dozen children that sleep in the streets and beg for money. A few peso is enough to satisfy them and I always offer this very small amount. I have heard that some of these children are pickpockets, but if so it would really be hard to ignore their plight and desperation. That said, I am careful when they approach me.

Random acts of kindness are apparent and frequent. For example across the street I have seen different young people carefully help a woman that uses a walker. They steady her walk and help her into a trike. Another example was when I was headed for home in a trike the driver stopped and shouted to the driver of a bicycle trike. He then turned behind the bicycle with a very heavy load that was headed up an incline. He gave the bicycle rider a push up the incline and pulled away when pedaling was easier. I say good on him!

The following is a photo essay with pictures of downtown Catbalogan: 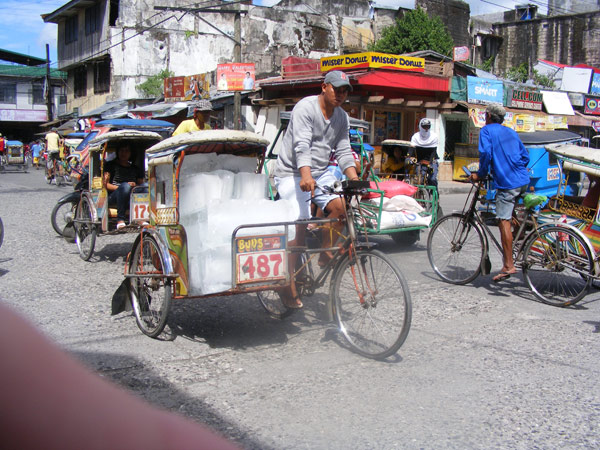 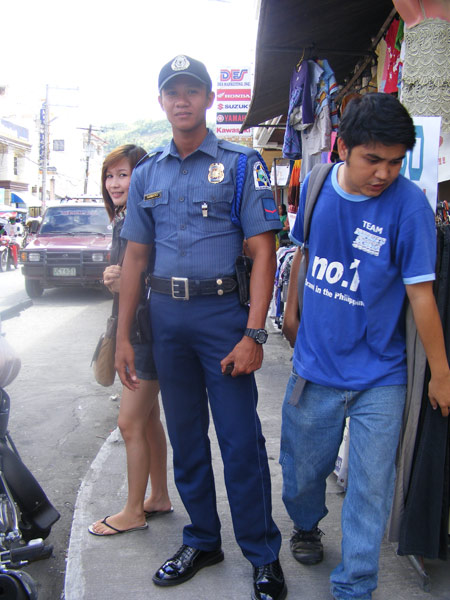 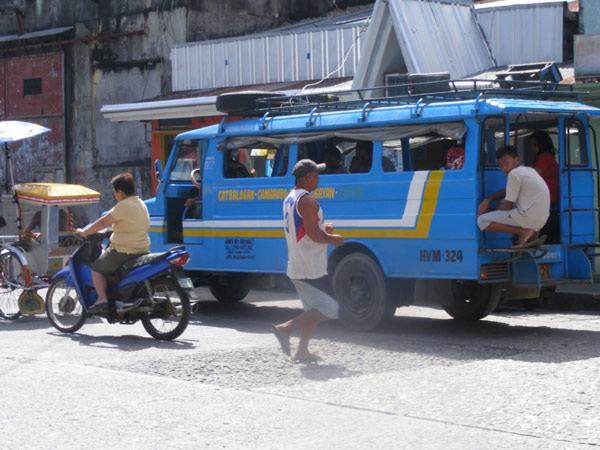 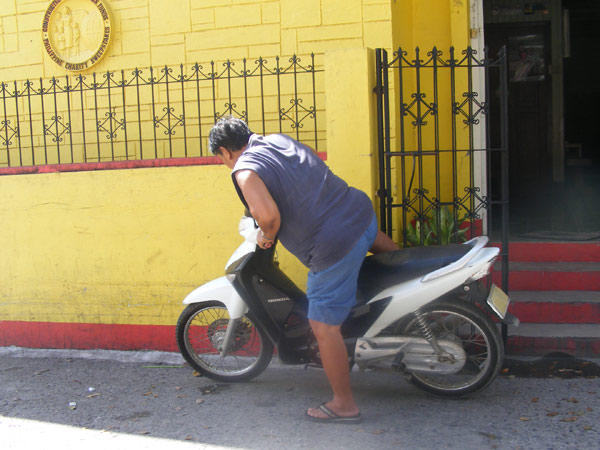 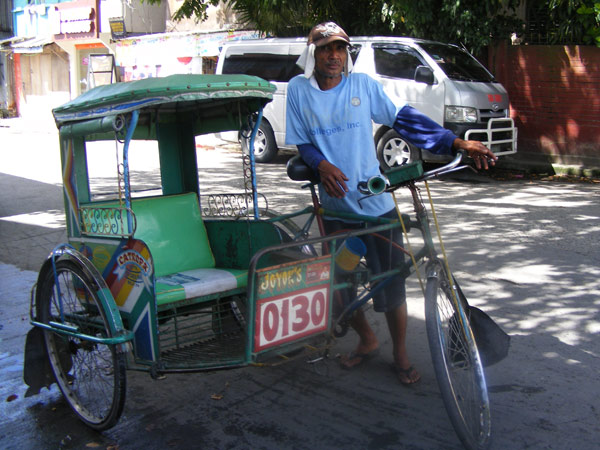 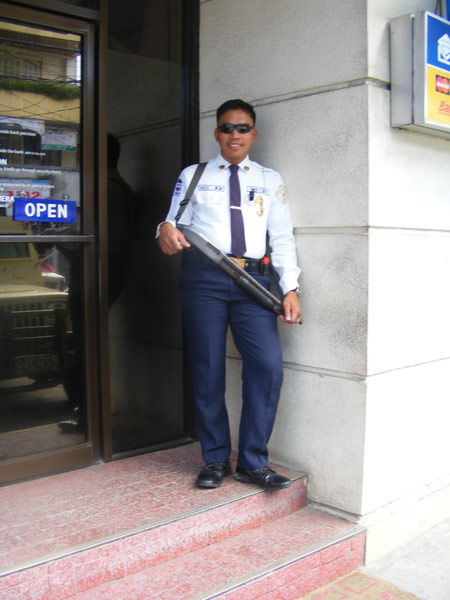 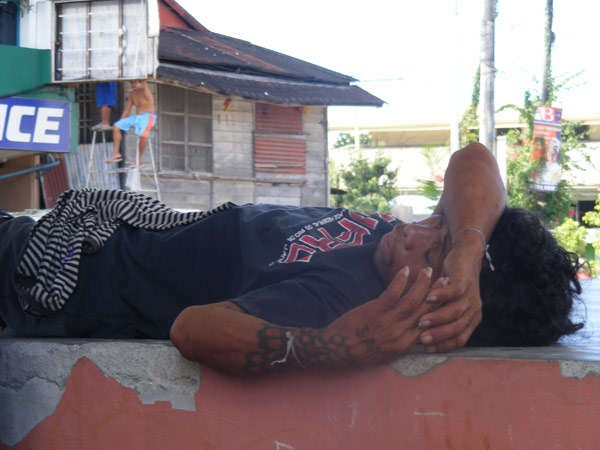 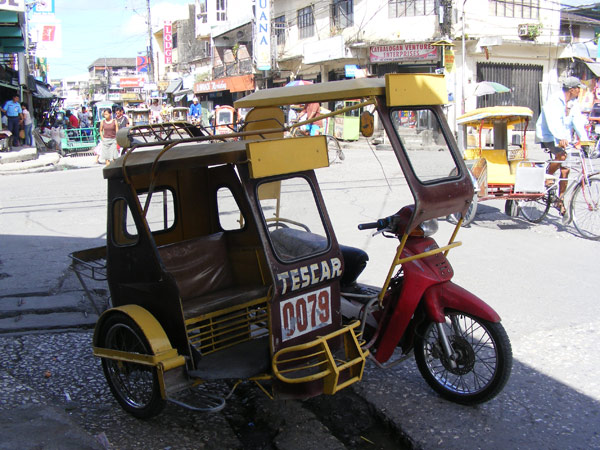 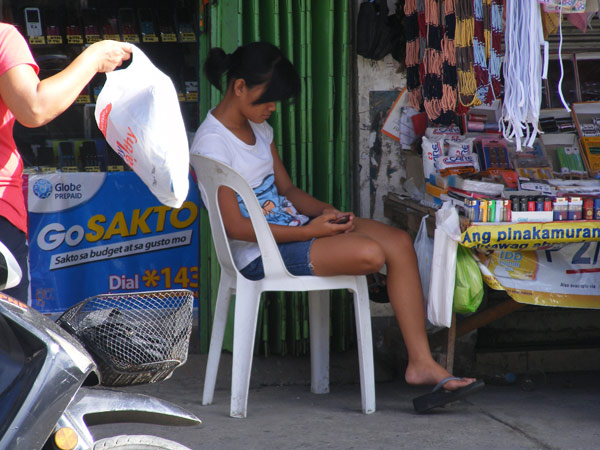 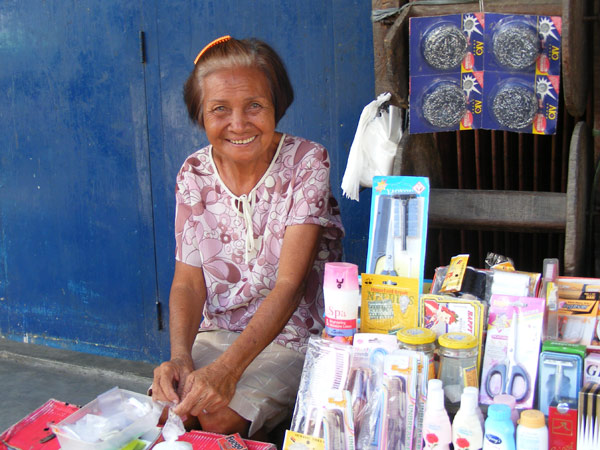 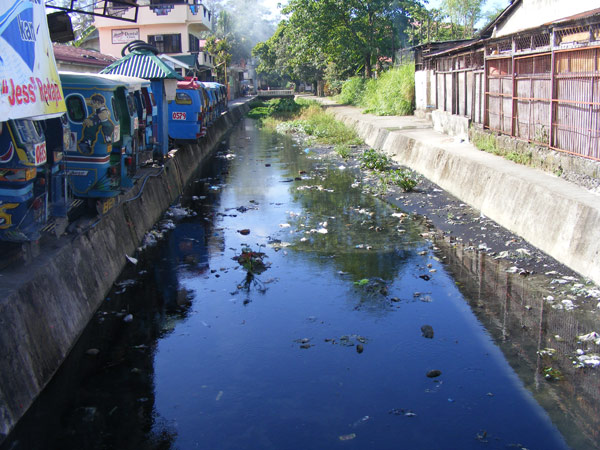 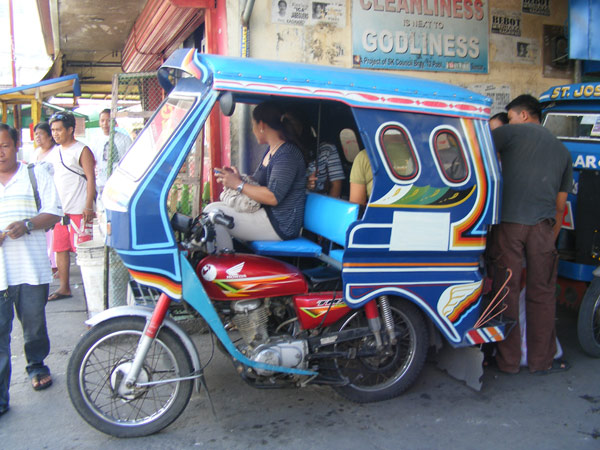 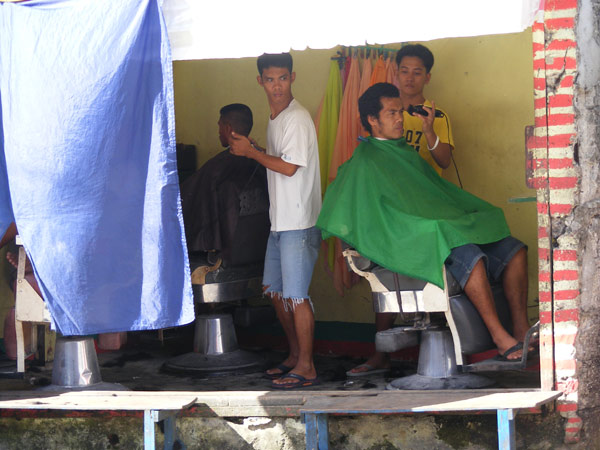 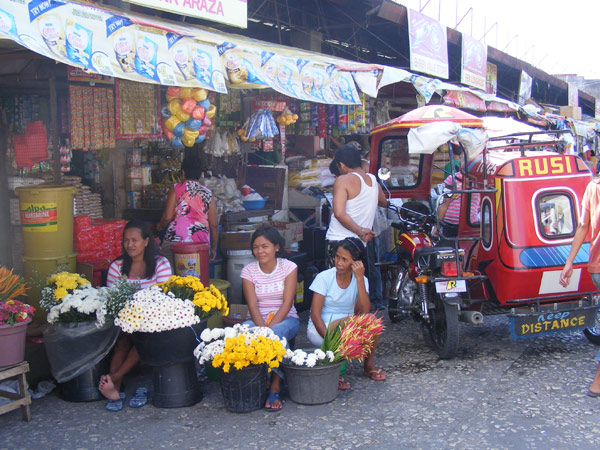 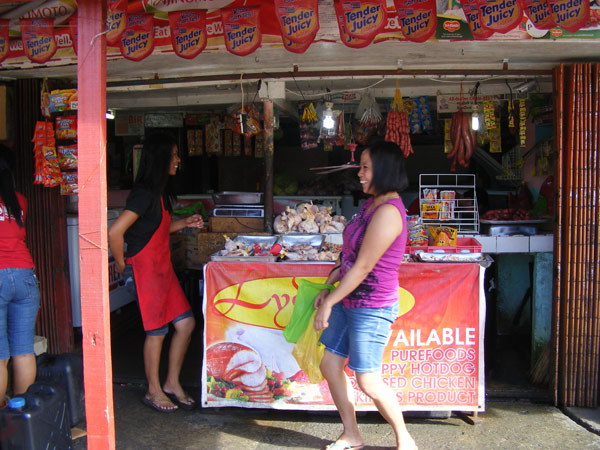 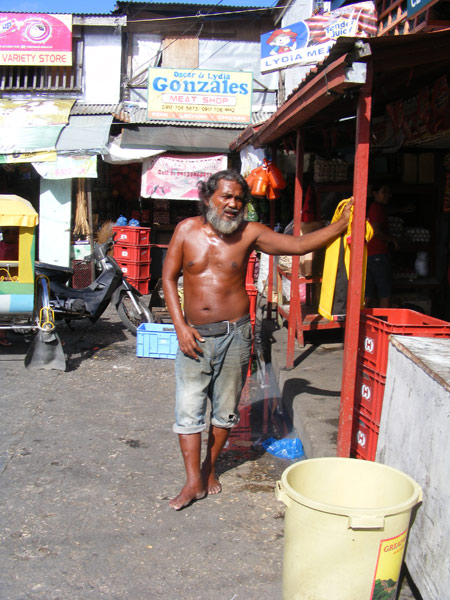 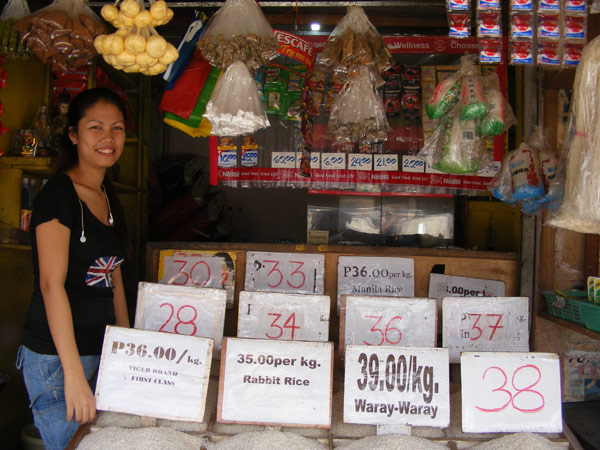 Very nice photos and interesting commentary. You've managed to do something that many, even Korski, Caveman and Pattaya Gary have failed to do – and that is pique my interest in the Philippines.