A Farang’s Lament For Don Mueang

After reading Ishiro’s retrospection on the old Don Meuang Airport, I just had to add my two penn’orth as well. Like millions of people, I’ve flown in and out of airports all round the world, but the only airport I have ever felt any real affection for is decrepit old Don Meuang. How can one love an airport, of all places? Most probably it is the feelings associated with it, the experience of arrival in Thailand, the strangeness compared to the West, the various relationships and encounters one has with Thai people, the country itself, and so on.

How many airports in the world do you arrive at, and as the aeroplane comes in to land do you see out of your window golfers hitting balls along a golf course right next to the runway? Not only that, but it’s in between the two runways.

Such was my first visit to Thailand in late 2005, unaware then that 9 months later future trips would now be to another airport rather more to the south-east, and much less interesting. The Airbus landing on that first visit was the softest and gentlest I’ve ever experienced, and I took it as an omen that I had arrived in an agreeable part of the world. I wasn’t mistaken. On that first visit I met a Thai lady who, thirteen months later became my wife, and who now travels with me to Thailand on a British passport. However, in that 9 months between arriving and subsequently switching to Suvarnabhumi I’ve worked out that if I included internal flights with visits to and from Thailand, I actually went through Don Meuang 16 times, so in that short time I got to know her quite well.

It always seemed to be small and sometimes irrelevant things that made Don Meuang so endearing. It just seemed to me that the place was comfortable, a bit like a room or a pub where the furniture and carpets are old and well used, but comfortable and familiar. Even though millions of people passed through every year, it seemed homely and personal. The buildings are irregular, nothing seems to match, and things are out of place. (A complete contrast to the new airport where the flooring, and the steel and glass ceiling, and the décor is the same wherever you go). I was amused at the long glass tunnel connecting the domestic and international terminals. The beating sun made this an incredibly hot walk, especially carrying luggage. Every few yards was an air conditioning unit fighting against the heat, but only managing to cool the immediate vicinity, so for about 200 metres you would be walking alternatively into extremes of cold and heat – a disaster of planning and design if ever I saw one.

Another amusing thing I found was that as soon as you got through passport control, there was the sudden long and steep escalator drop down into the baggage hall. Being weary after a long flight I always seemed to get an attack of vertigo when stepping out and on to this escalator, making the sense of arrival in Thailand even more unreal.

I am a smoker and for such people the locations of smoking rooms at airports are particularly important. Those of you who don’t smoke and who are offended by such issues can look away now. My own country, the United Kingdom, is one of the most mean spirited places in the world for such things. I always dread the return to London’s Heathrow Airport, because until you are off the plane, through the jungles of passport control, baggage pick up, customs, and right outside of the arrivals terminal you cannot light up. But this was never a problem at Don Meuang where there were smoking rooms all over the place for both arrivals and departures. After a 12-hour flight it drove home to me the welcoming nature of the Thais, to be able to enjoy a cigarette within about 2 minutes of getting off the plane, with other like-minded gasping passengers. This tradition continues to this day, at Suvarnabhumi.

My last visit to Don Meuang as Thailand’s main airport was the day after Thaksin was unseated, the day after the coup on 19th September 2006. The previous evening I was in my girlfriend’s Bangkok apartment when I received a text from a friend in the UK which simply said ‘what’s going on out there?’ This confused me a little, at first I thought he was being personal by asking what I was doing on my trip. Then it clicked, and I switched on the TV. My girlfriend’s exclamations of horror, as she discovered what was happening – many of the channels were not broadcasting normally, but she found one with an elderly man describing what was going on. We spent most of the night discussing whether I should go to the airport in the morning, since we weren’t sure what the situation in Bangkok would be like in the coming days.

In the end I decided to go, and left early, as I felt that if there was going to be trouble in Bangkok it would develop later rather than sooner, and I would do well to escape quickly whilst I could. There were soldiers at the tollbooths as my taxi got on to the tollway near Suksawat Road, and more soldiers as we arrived at the airport, but other than that, it seemed normal. There was more of a hushed atmosphere inside the terminal; people seemed to be going about their business more quietly than usual. I checked in as soon as the EVA Air desk allowed, relieved that I was now on the departure side, and spent over 2 hours relaxing in the nearly empty departure lounge, as the photo taken on my mobile shows, before taking off for London. 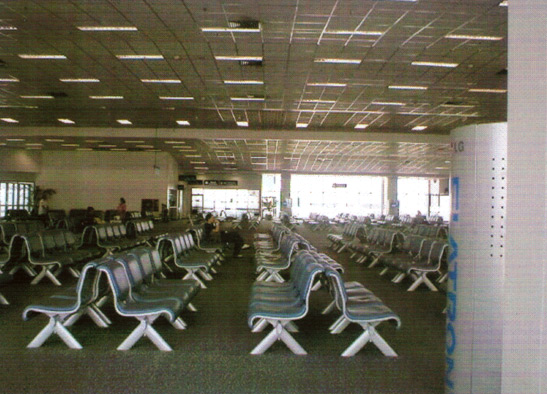 Since that time, I’ve visited Don Meuang only once, which was last year 2012. The budget airlines are the sole occupiers now, and we flew Nok Air to Nakhon Si Thammarat on our way to Samui by coach and boat. This route, whilst taking half a day instead of a 45 minute direct flight from Suvarnabhumi, cost half the price of Bangkok Airways. When four people travel together and I’m paying, this is quite a saving! It was strange and saddening to visit the old airport. They were using the international terminal now for domestic flights, and I remembered that the last time I’d used the particular departure gate we were at, was a 2:30 AM China Airlines flight to Amsterdam way back in April 2006.

It does seem a bit silly and sentimental to feel the way I do about this airport, but in my case it relates to a life changing decision I made, back in 2005. Even though I have nothing against the new airport, I still miss the initial experience of turning up at Don Meuang whenever I arrive in the marvellous country of Thailand.

It's amazing how many people have fond memories of the old airport! I have to admit that I personally prefer the new airport, notwithstanding that my best memories in Thailand are all from the time when the old airport was in operation.

The Truth is Optional

Wherever You Go, There You Are