A Different Kind of Woody 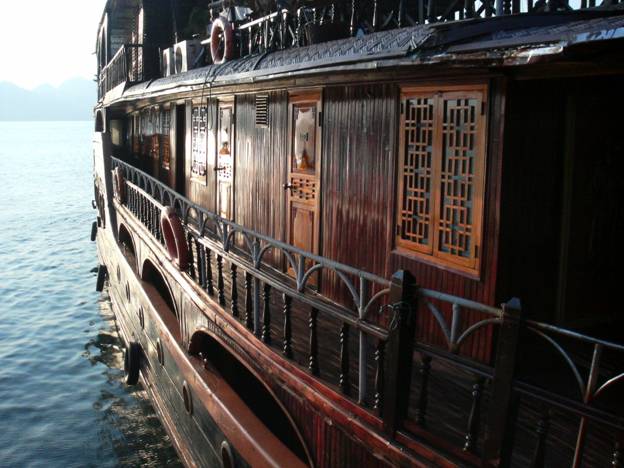 I have a thing for carved timber, the older the better and polished teak or mahogany if possible. Unfortunately for me this attraction of mine has become a slowly vanishing commodity being sadly replaced by the modern day chipping machines and fast cheap treated pine outlets. This brings me to my story of Halong Bay… not a tree. I was lucky enough in my past travels to have taken a few photographs of some of the older teak junks…not an endearing term but I still enjoy looking back on them and hope these floating relics of the past stay an integral part of the Asian visual. 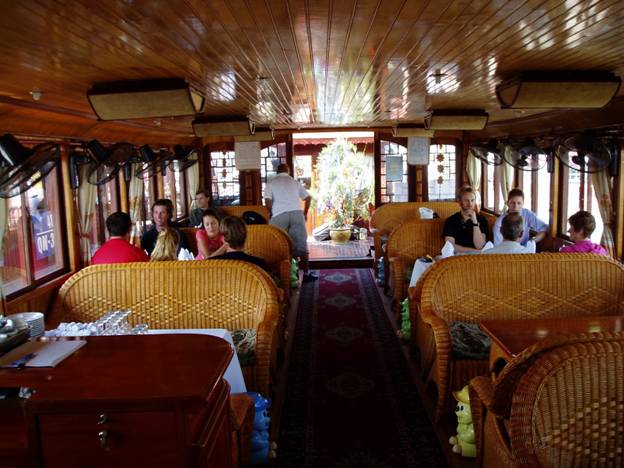 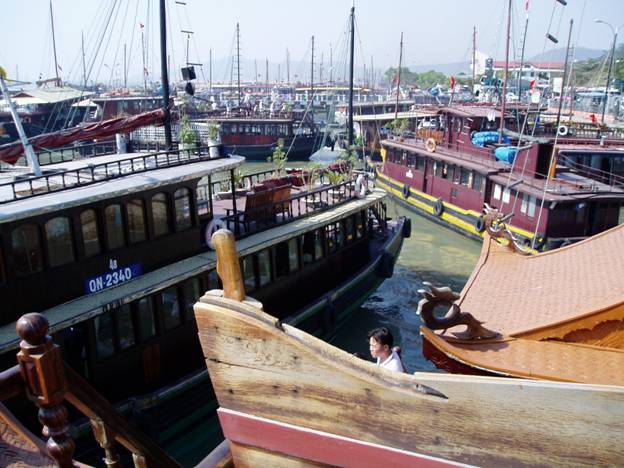 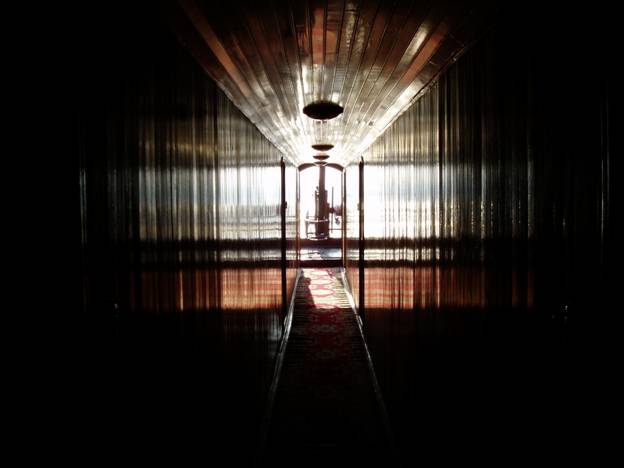 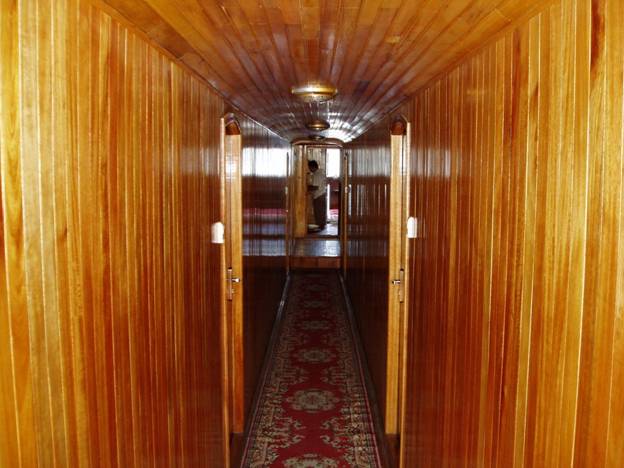 Very clean and surprisingly roomy mess hall. I arrived in Hanoi and after about one week of exploring this chaotic and vibrant city decided to make my way to Halong Bay. A four hour trip by mini bus cost around two dollars and it was only about 150 kilometers away, luckily though it was December and comfortably cool as the air conditioner was called ‘open your window.’ There were a lot of dusty road works, buffalos, bladder discharges and stopping to pick up locals for free rides, the Vietnamese look after their own. The bus arrived about three in the afternoon and Halong Bay was crowded with tourists boarding the junks. I think I was the only one not booked but my intentions were terra firma at the time so I just ambled along happy to take it all in. I eventually got to the end of a busy pier and was totally absorbed in taking picks, there are some beautiful teak boats here and I was distracted when I heard a voice call out “You like, you like?” 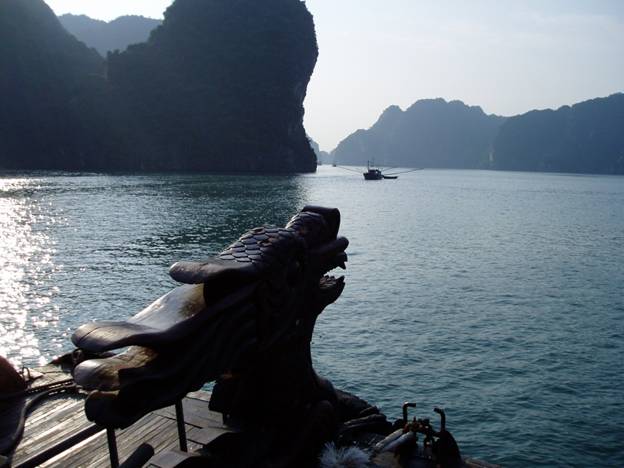 He was a middle aged and built like a strand of barbed wire, fit, and obviously part of the five man crew. He was busily manipulating ropes at the front of the junk while the last of about eight western tourists boarded on a narrow plank. I replied back saying his junk was magnificent…he didn’t seem to understand so I just said “Yeh, nice.” He smiled back and asked if I “wanted to go” in his broken English saying it was a five day trip and plenty of room left. I told him I didn’t have a ticket but I was interested, his face then lit up in a very understanding way and he me told to wait one minute. Two minutes later I boarded junk 208 and slipped Pop Eye fifty dollars, he grabbed my swag and led me to my cabin through a magnificent polished teak hallway; I said “Nice” and avoided any more long words. 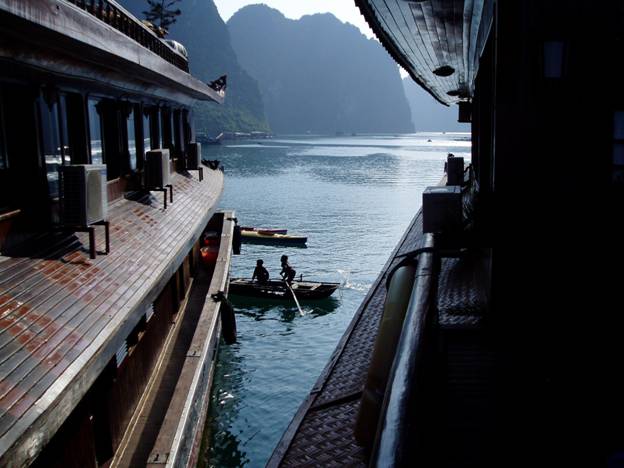 I had a smallish teak room with a sea view window, we all did, there were three meals a day and the evenings gastro delight was a silver service three course affair… take note if you have intentions of swooning your Thai hooker. On a few occasions we anchored near small beaches throughout the gigantic and impressive limestone archipelago (nice big rocks) and the crew would place tables and chairs in the sand and begin preparing fresh salad, prawns, crab and generally all the food you have to avoid if you have gout. I would catch up on a bit of swimming in the relatively clean water while the Cpt. and his four crew divided up my fifty dollars happily, I firmly believe bribery and corruption is acceptable when everyone is happy, I do like this philosophy, especially when I found out I wasn’t being ripped off one bit, I would’ve gladly paid three hundred plus if I knew what I was in for. 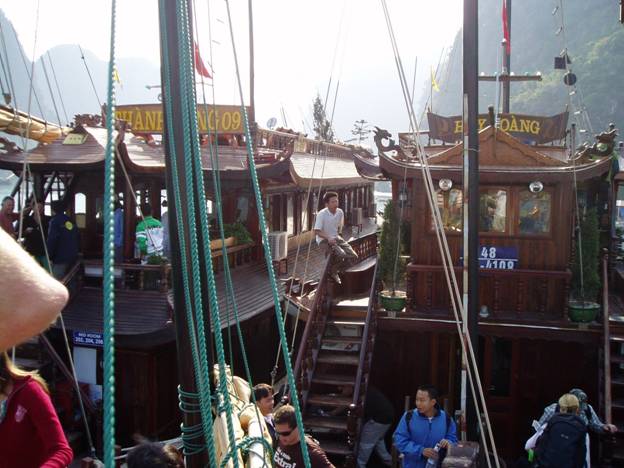 We stopped for a day on three separate occasions, and excuse me for not being factual on names but it’s easier to say an island with a big cave than Bo Hon Island, The Virgin Cave Hang Trinh Nu. The two other nice islands we stopped at were interesting, one had a long and wide concrete push bike track, actually a road but with no traffic and it was great to stretch out my legs, apart from nearly having a head on with some locals, why do they drive on the wrong side. While there I met a lovely, bong smoking family who were government funded caretakers, I sat and chatted with them leaving the other tourists behind, I like it that way. After a while of laughs and a few beers, he took me for a short walk and then behind an old shed showing me an original and immaculate, 1940’s WW2 Riley’s jeep under a heavy and dirty army green tarp. It still had the original badges and painted US logos, “Sell later, sell later” he said smiling…”Nice” I said… emotionless. 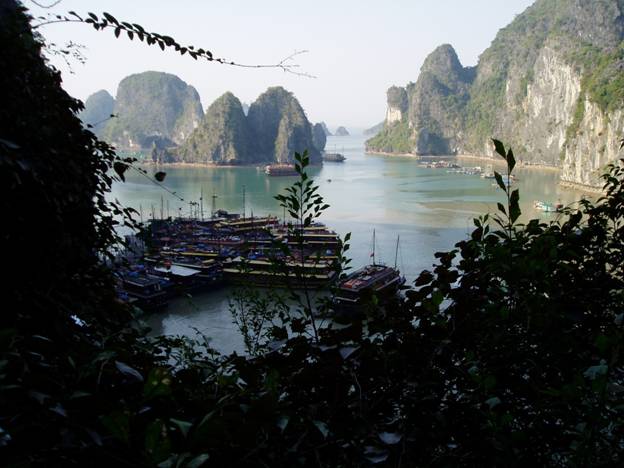 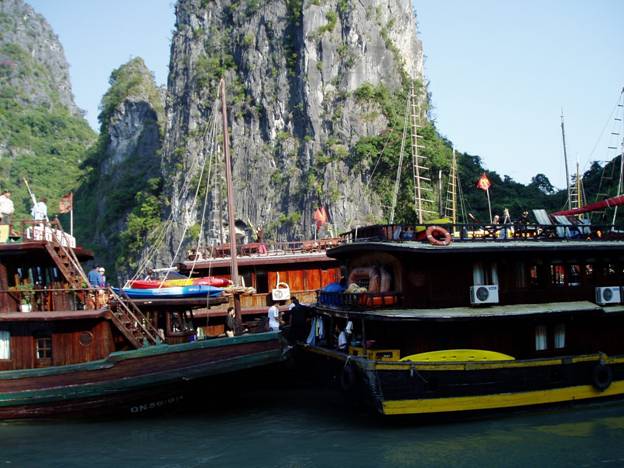 Looking out from the cave..jpgAnother big island (Cat Ba) had a large hotel and quite modern infrastructure, a family concert during the evening on a large stage was entertaining the crowd as the sun set over the water behind the singing and dancing kids, the moment was ruined though as a sixty year old fonzie looking pimp approached me and… “Pssst, want a young girl”…”Fk off, you understand?” he looked surprised and then… fkd off. The highlight though was leaving in the morning; I left the hotel early as I saw the breakfast menu. I would meet up with the tour group on the other side of the island where the junk was anchored and on the way I bought some loose pearls (just a quick note here, always take a lighter to them, if they melt they are not pearls, you knew that though) and caught a taxi bike to a little stall on the wharf. Here was a kindly old woman sitting in an small tin shed with plenty of ventilation rust holes, in front of her was a wooden (teak) table covered in coffee making utensils, you can guess the rest, Vietnamese coffee, pitch black, rich, thick and aromatic, I can still smell it today and it made my hair stand on end. I tried to tip well, after all she took about five minutes making each cup, but it’s a social thing, she just smiled with her saffron coloured teeth and warm dark eyes saying “Too much, too much, next time, next time ok.” Party should be starting soon. 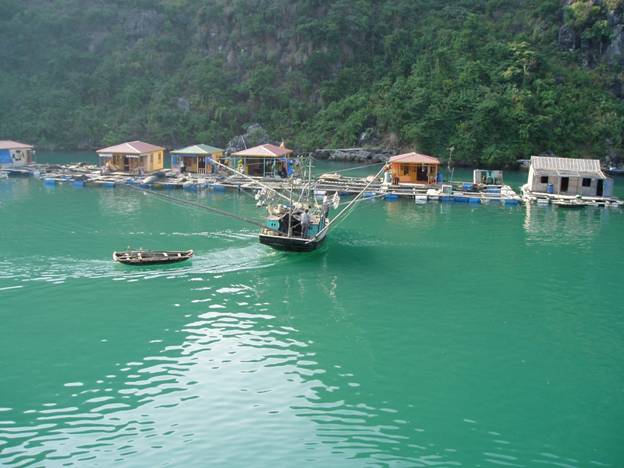 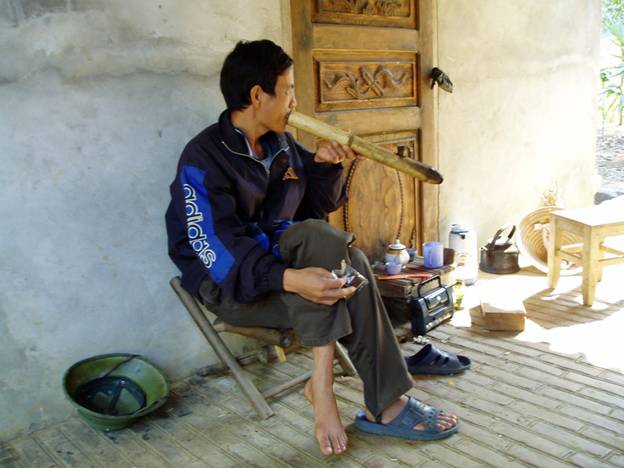 AAA.jpgWe took on board two large, loud, Caucasian women backpackers and headed our lazy rocking way back to Halong Bay port, I think that’s what it’s called, and again, I was just enjoying the tranquil journey on the creaking, timeless and solid old teak junk reflecting on my last five days. I was stretched out on the top deck in the afternoon sun and watching the peaks of the limestone cliffs float past, just taking in all the serenity of the ‘Bay of Descending Dragons.’ While totally immersed in deep, peaceful thoughts I was suddenly interrupted by an ear piercing, ‘cat being burnt’ like voice yelling at me, I turned quickly from my deck chair in half fright and there, five meters in front of me stood this grossly dressed, overweight and puffing backpacker woman with a cigarette in her mouth. I won’t mention which nationality she was but again she screeches like I was one hundred meters away and yells… “Hey mate, where’s the fkn dunny on this floating shitheap?” God, give me strength. 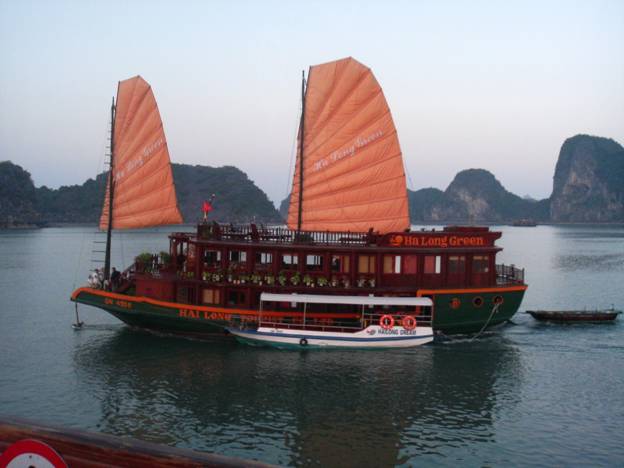 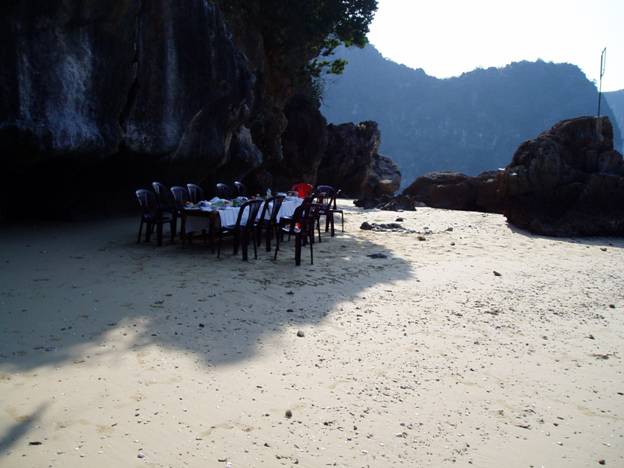 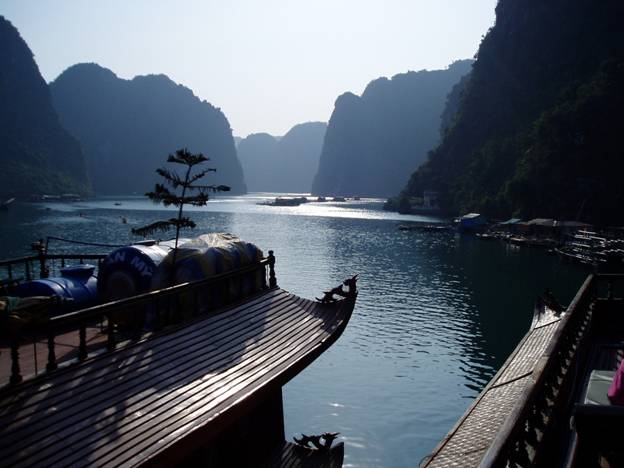 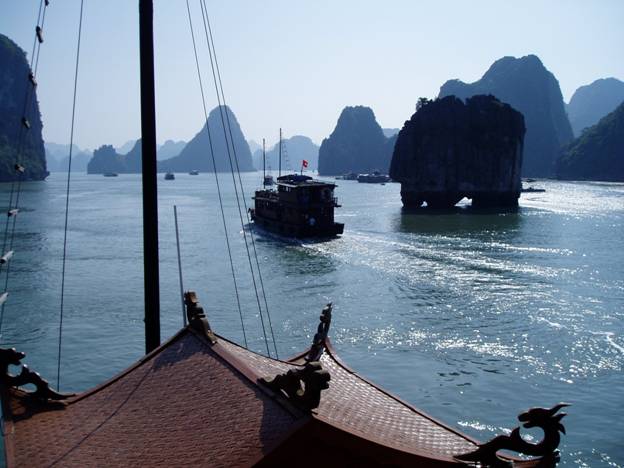 The Xmass tree was a nice touch..jpgall 032.jpgOne week later I was back in Bangkok and grabbed the BKK post from the hotel foyer while making my way to my favorite street vendor in Soi 4, after ordering a freshly brewed coffee I sat on a plastic red chair and began to relax while reading the headline… ‘Large, grossly dressed woman backpacker found floating in Halong Bay.’ 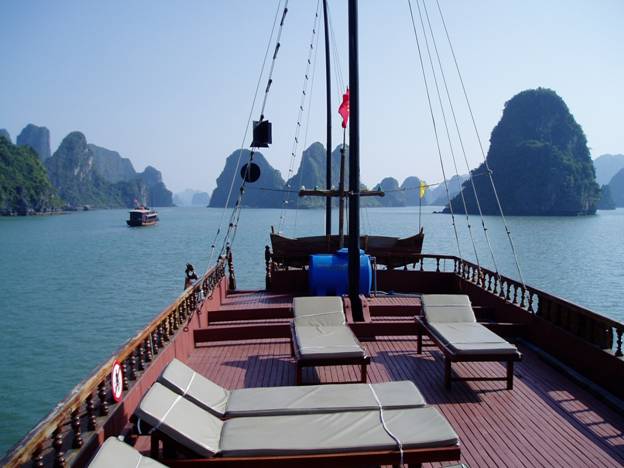 I can dream a little, can’t I? 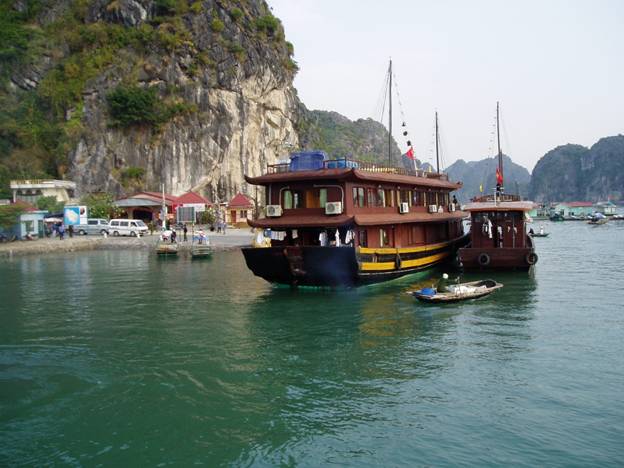 The small wharf with the cave entrance above. 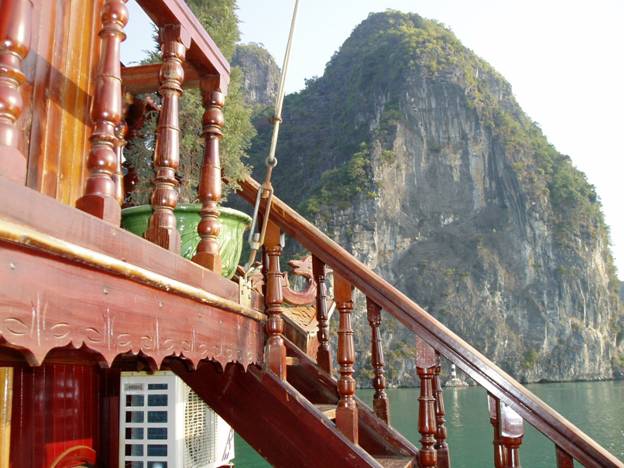 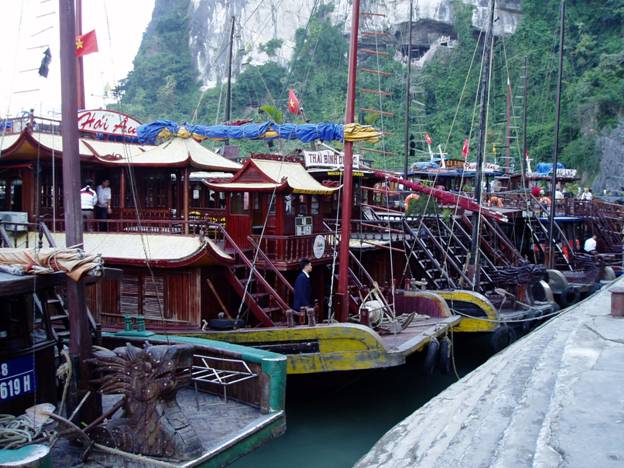 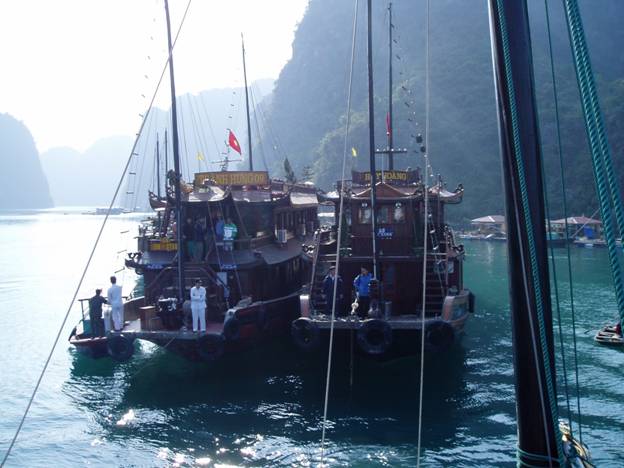 Nice photos! This is a spot I hope to check out this year so hopefully I can get some shots as nice as yours.