Up the Load, Up The Load

I had been in Pattaya for about one week and in that time had ‘befriended’ a lovely 35-year old gogo dancer, as you do, and she was different…to a degree. Most of our outings around town involved her dragging me into temples of various sizes and states of repair, all good and I did enjoy the adventures, but enough is enough, I was tiring slightly as they all started to look the same and it was in the “Vely, vely vuking hot season” as she eloquently put it. I had started to explain to her that I’d seen enough but little did I know that Nan had left the best till last, and it was completely beyond my expectations. One morning she kept at me nagging… “We go temple, one more, one more,” and excitedly explaining it was just “Up the load, up the load, not far, not far.” 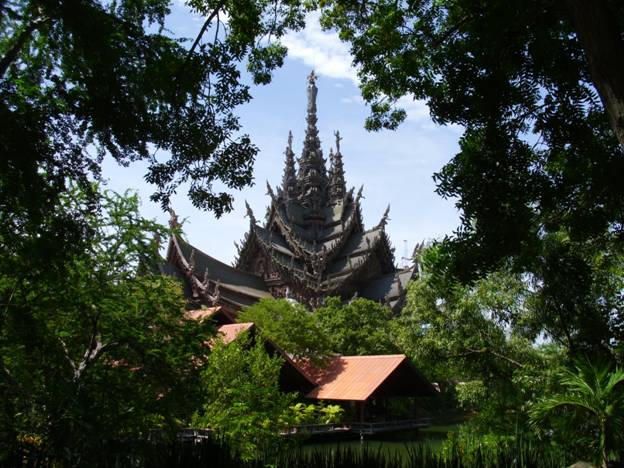 Away we go in a tuktuk up to the northern end of Beach Road, left at Roma circle onto Pattaya Naklua Road and get out somewhere in a small town called Naklua, and then onto Naklua Soi 12, this better be good, I’m already bored with Naklua. We then jump onto a bike and ride up a big hill, Naklua Hill I would guess, and do not attempt to walk unless you are very fit. On the way up I keep spotting the top of an enormous wooden structure in between buildings and trees, my interest is becoming heightened as Nan keeps yelling and nagging in my helmet… “Up load, up load!” We pull up outside a large concrete entrance just as I put a sock in Nan’s mouth. A sign stating; Prasat Sut Ja-Tum, confronted us, The Sanctuary of Truth. 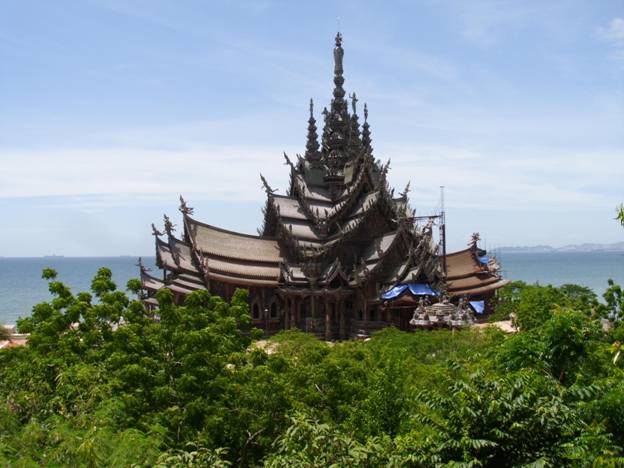 Rising 345 feet into the sky and possibly just as wide, this entirely wooden structure stopped me in my tracks, I had forgotten about the 500 baht entrance fee and just gazed at this awesomely striking temple rising from the rocky point of Rachvate Cape that was set against a backdrop of sparkling ocean. I turned and took the sock out of Nan's mouth and put it mine. 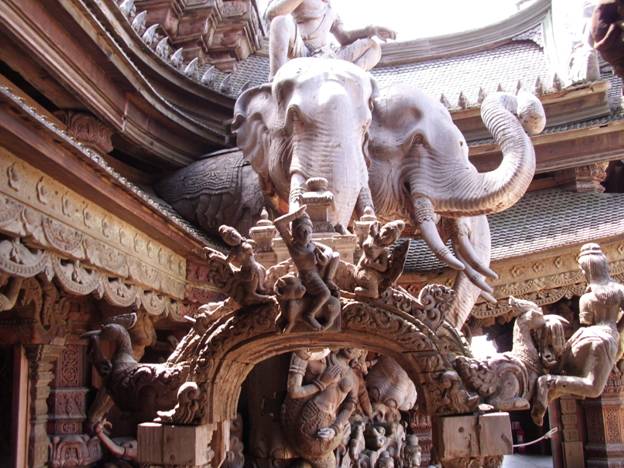 I believe the temple was started in 1981 by the late tycoon businessman Lek Viriyaphant, or Khun Lek, who is also accredited for the construction of the Ancient City outside of Bangkok. Khun Lek also funded the construction of the Erawan Museum in Bangkok, and by all accounts an amazing piece of work as well. The Sanctuary of Truth, or sometimes called The Temple of Truth, is expected to be completed in 2025, a hum, cough, Thai time…we’ll see. (With no disrespect to the late Khun Lek, an obviously respected patron of the arts and deserving of much credit, I take my hat off to him). 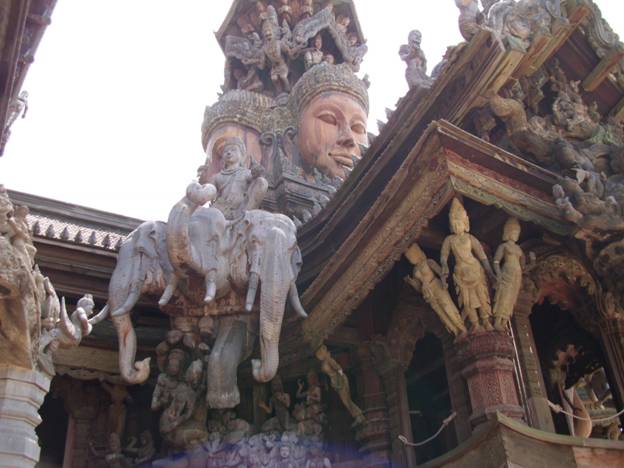 We were handed plastic construction helmets as work was still ongoing inside and out, our guide spoke great English but after a short while I became oblivious to her ‘out of the book facts’ and immersed myself, or more appropriately got lost, in the humungous cavern of meticulously carved wood. There is not a nail to be found, all the timber is locked by tongue and grove and that is quite remarkable considering the enormity of the structure. There are over one hundred workers on the site and at least 30 are carving busily away at large pieces by hand. I never saw any power tools so I’m assuming that is general mode of construction, maybe I should’ve listened to the guide. The overall ancient grandeur and tranquility of the surroundings had me overwhelmed and astounded, I felt like giving up the drink and living a life of celibacy…that was just a fleeting thought though. 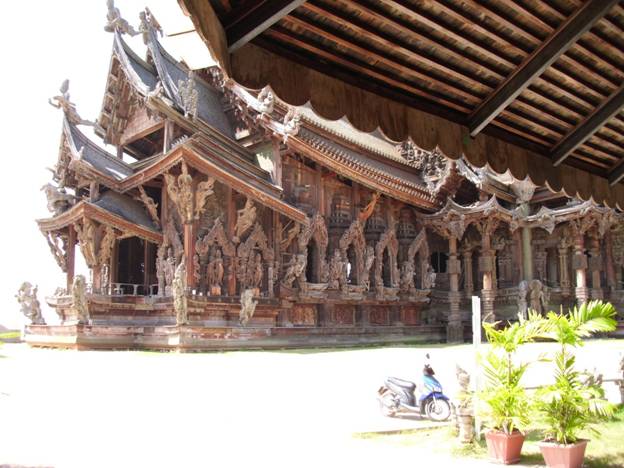 Nan was amazingly subdued and respectfully quiet during the whole tour, she would often sit and wai at particular spots and in private, then chant very quietly with the sincerity of a monk, she believed and knew something I would never grasp fully, a wonderful, enchanting feeling of serenity was on her face and far removed from the bustling hardness of Walking Street. The Sanctuary of Truth and a gogo dancer, what a contradiction I thought, or was it? Strangely, I looked a little further into myself that day. I will leave this story with some pictures and continue with the next adventure of ‘up the road’ that happened some years later and unfortunately, I had no camera at the time. 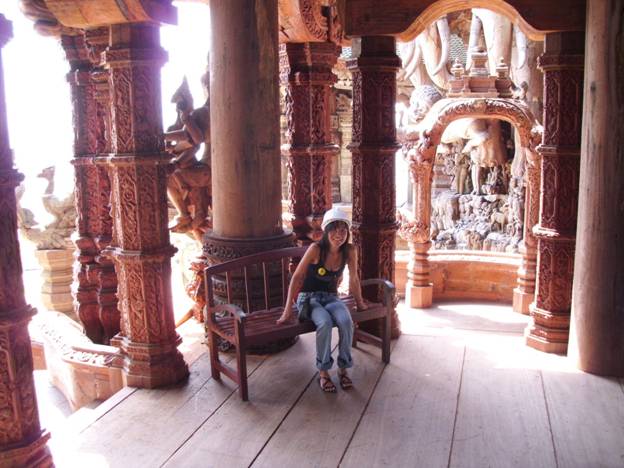 In the bustling city of Phnom Penh, another lady friend of a one week relationship, Ayu, said nearly the same thing to me one lovely morning , “Up the load, up the load, my temple, we go, we go please”. 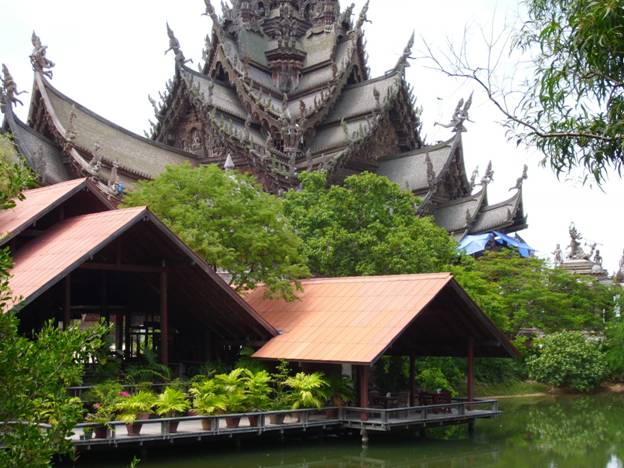 The first warning sign for me was stopping at local fruit market and buying 5 kilos of fruit and 5 liters of water, the trip ended up being over 4 hours one way over the bumpiest road in a smoky, noisy and shaking three wheeled trike, I was covered in dust, sweat and tears and not very happy. Eventually we turned off one track and onto another, a very narrow road in a small tree lined valley. We bounced along for a short while and then approached a rundown rambling brick wall, there were two long and very thick, three headed stone snakes at the entrance, and Ayu was getting visibly excited. I was slightly concerned. Further along we stopped in front of an old restored stone temple and dusted ourselves off, we then walked up a brick stairway and entered through two large teak doors that creaked when pushed open. Three monks in robes sat facing us in a mist of grey billowing incense, they seemed to be glowing in sunshine that beamed from the large open windows above them, it was a picture never taken. We were about 30 feet from where they were sitting and on instruction from my better half we then bowed and knelt. The head monk who sat cross legged in the middle of the large room motioned us forward, we began to crawl over, not because it was the right thing to do, but my back, ass and legs were so numb from the bone rattling 4-hour journey it was all I could manage. When I got right in front of them I couldn’t sit cross legged for the life of me, and at one stage rolled over and onto my side trying, knocking over a lit candle to the embarrassment of Ayu and the amusement of everyone else. The head monk, who looked about 90, had a grin from ear to ear, he looked as if he was about to break out laughing with the kindest eyes I’ve ever seen in a man. He motioned me to relax, my girlfriend Ayu whispered to me that it was alright to just lay on the wooden floor and prop myself up on one elbow. A great look and I’m absolutely sure I would never make a good public relations officer for Australia.

During the ritual of getting water splashed on our heads and chanting in harmonious song, Ayu handed over the bags of fruit and water plus some cash for the temple occupants. All the monks had words with her and the tone was jovial with intermittent shy giggles and subdued laughter.

I asked Ayu later outside what all the joviality was about, she smiled and said, “The head monk realized what a rough journey you had and he was just happy you made the effort.” Nice saving face Ayu, as I could still hear them pissing themselves with laughter inside the temple…with the utmost compassion of course.

Again, thinking back on it now, I can’t help but laugh to myself and admire the culture and mystery of it all and the unforgettable moments in time. When you think you know everything, you really know nothing. My attitude towards the important things in life are changing, and for the better.


The Sanctuary of Truth is fascinating and nothing like a typical Buddhist temple. For this reason alone, it is well worth checking out, especially if you're into photography. That said, the 500 baht entry fee is enough to put people off visiting what is, after all, an uncompleted temple!

As Westerners, We Think We Need An Automobile