As our guide leads us down the steep track towards the cave entrance the dense, surrounding jungle is still heavy with fog at 0900 am. Andrew and I are on day two of our trip into Mae Hong Son and we were up at first light preparing ourselves for the tour into Mae Lana Cave. The exploration of this cave is the primary reason for my being in Mae Hong Son. For Andrew, the extensive tour into the underground river system will be his first experience of this type of activity. We picked up our local guide, at a check point back along the road, where he advised us that the two kilometre underground trek was 500 THB each and would take approximately four hours to complete the round trip.

After roughly an 800 meter downhill walk from the car park the track levels out to reveal a small stream running under a cliff face. Our guide informs us that we’re at the entry point into the cave and we ready ourselves for the four hour trek underground. A few minutes later, with head lights in place and camera gear set, we work our way through a crevice, in the limestone cliff face, and enter the cave. The following is a picture essay of our trip into Mae Lana Cave: 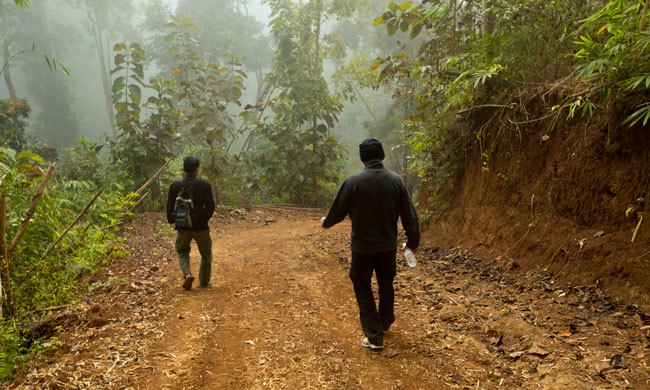 The track to the cave entrance; thick fog in the surrounding jungle 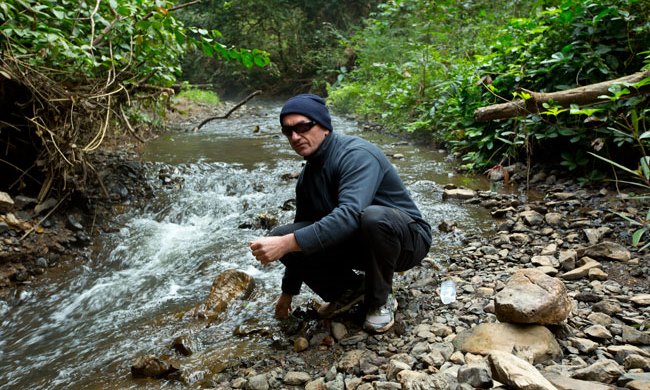 The stream that flows through the cave system 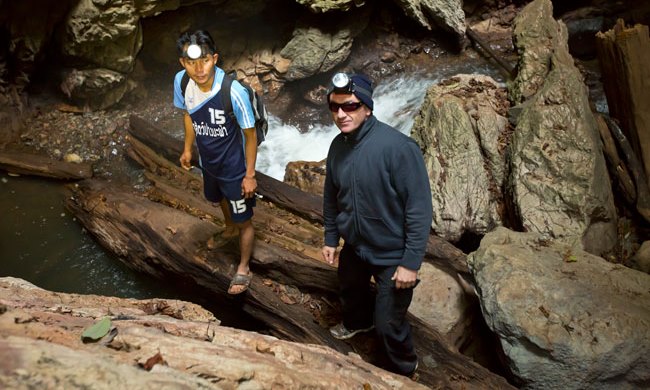 Headlights in place; Andrew and the guide about to move into the cave 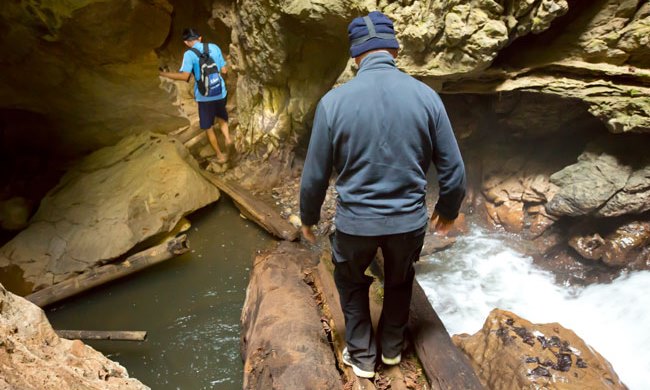 Moving from the light zone into the darkness 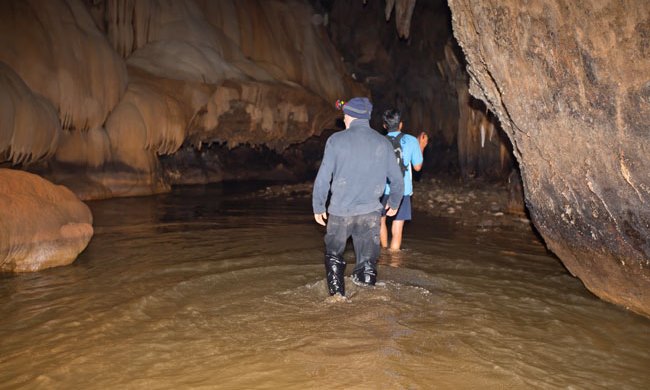 Knee deep in the underground river 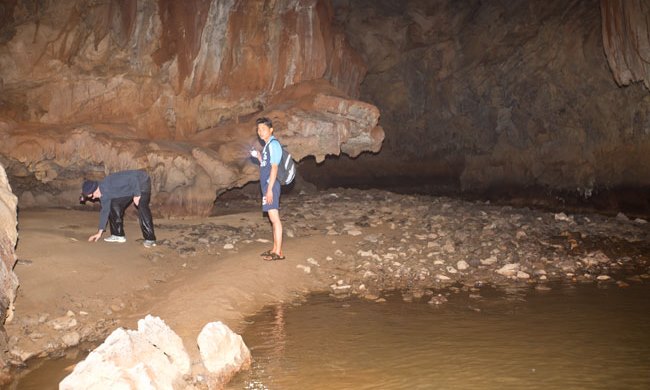 The open spaces of a wide point in the cave system 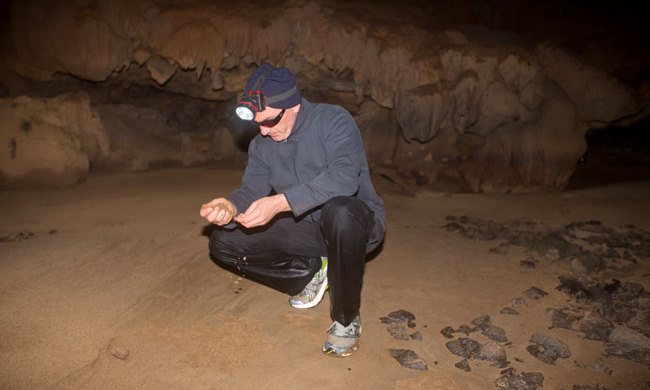 A few minutes rest on the underground beach 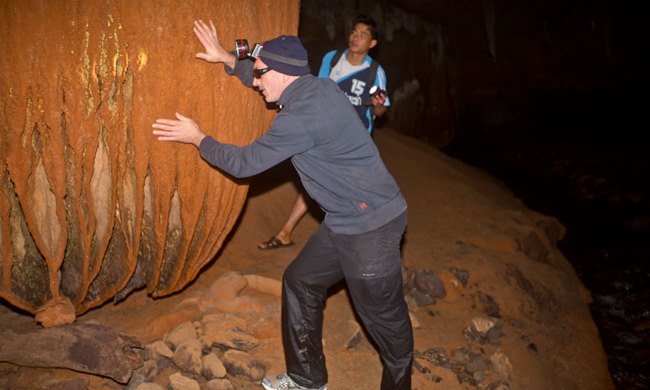 Checking out the orange colours of the formation 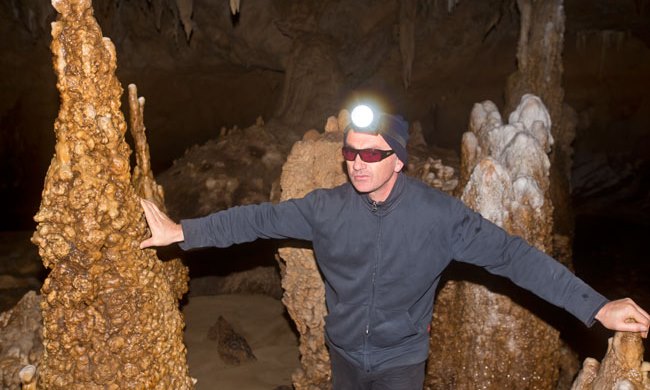 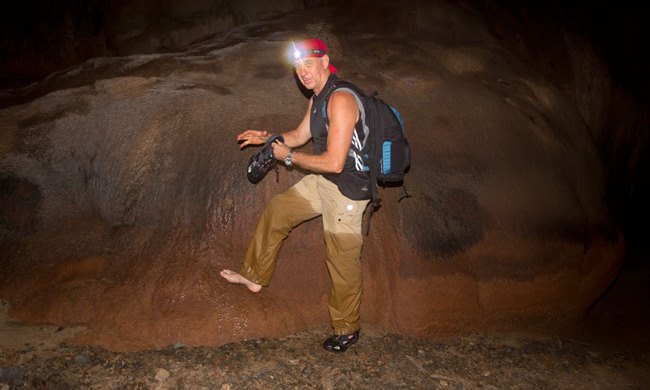 Shaking the river stones out of the shoes 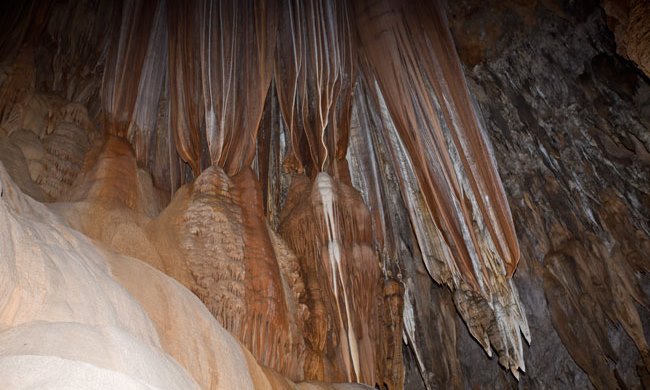 Brilliant colours high up on the cave ceiling 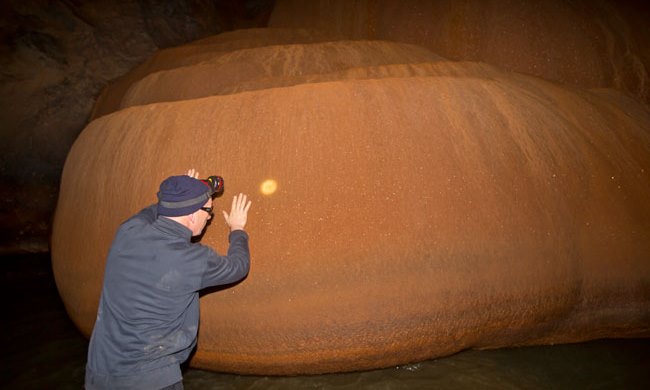 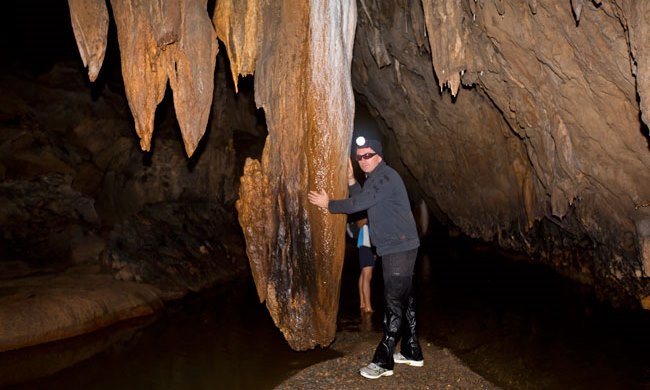 An impressive stalactite at about the half-way point 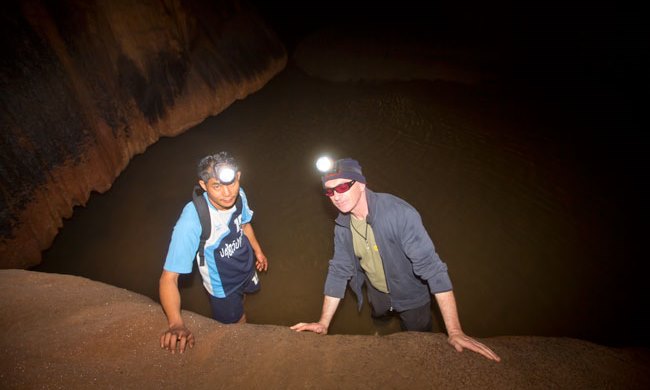 Down into the river again 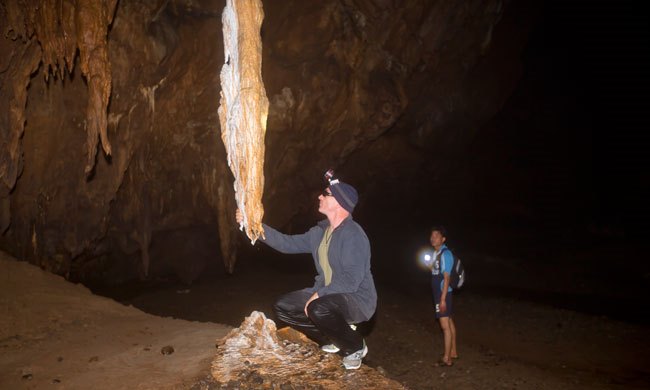 The needle from the roof 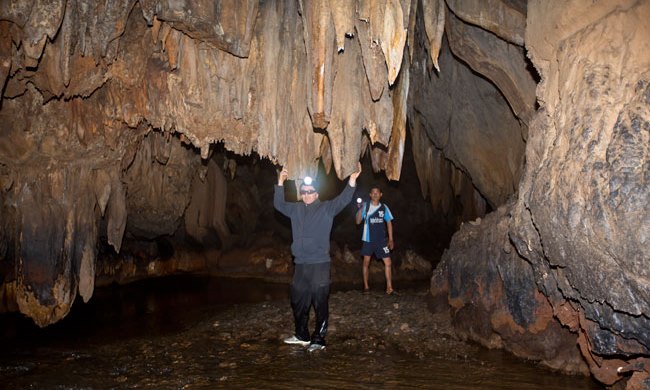 More jagged formations protruding down from the cave roof 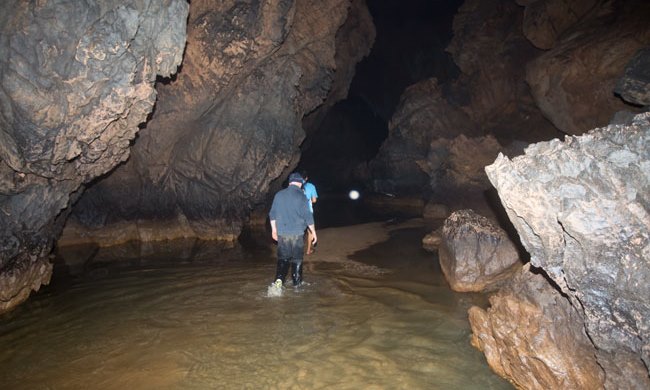 More wading time as we continue on 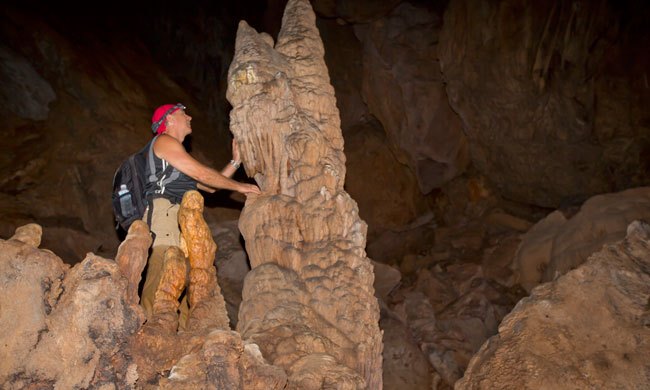 A climb up for a closer look 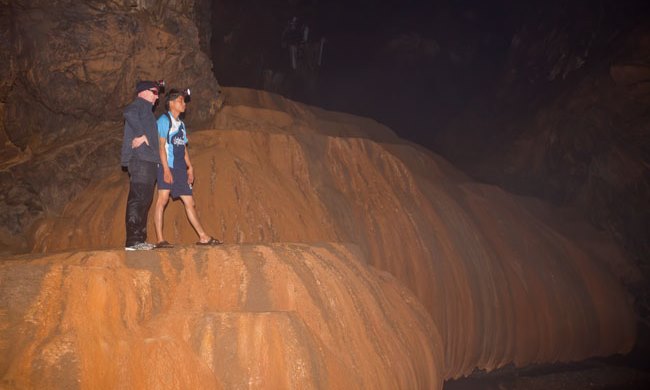 For all intents and purposes, we could be on another planet 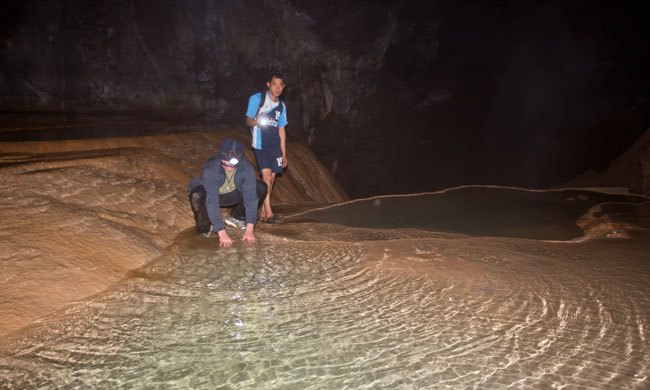 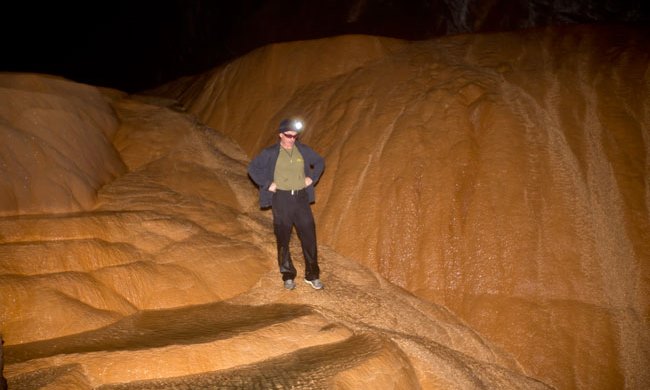 The enormous orange flowstone at the end of our trek 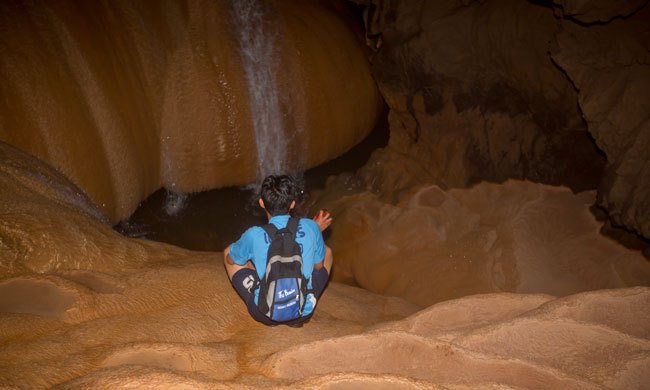 The small waterfall we’d come to see; slightly disappointing compared with the journey in 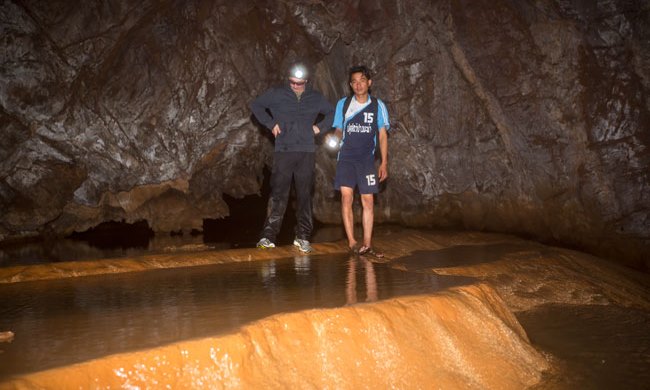 A bit more time to admire the surroundings before heading out