It’s a few minutes before 0700 and we’re standing on a high point looking out across the fog blanketed peaks of Mae Hong Son. It’s a surreal sight as the sun inches its way towards daybreak. We’re roughly 20 kilometers off Hwy 1095 on a back road that we recce’d the previous day. We arrived here this morning to find a small group of young travelers standing around in the dawn coolness watching the colours change on the horizon whilst drinking mugs of hot tea. With the songtaew parked on the road nearby, and the thermoses and hampers spread out on a rattan mat, it’s obviously some sort of tour organized by a local operator. We take up a position further down the slope and start working our cameras as the yellow orb gathers strength in the distance. The fact is I’ve always been a sunrise person as opposed to being a sunset person. I think this probably has a lot to do with growing up on the east coast of a land mass instead of the west. And it’s not just about the few seconds it takes for the sun to climb above the distant horizon and cast its rays into a new day either. It’s also about the approach to that moment; the twilight zone of receding darkness. The appreciation of the dawn of a new day; the freshness and in this part of the world, a short period of coolness before the coming day’s heat gathers intensity. 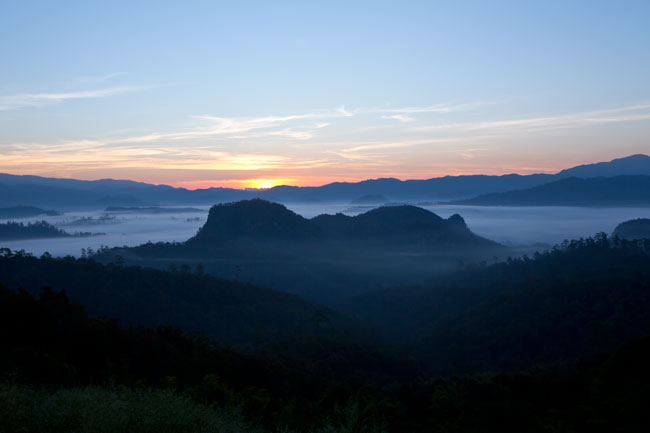 Approximately four kilometers south of Hwy 1095 and six kilometers beyond the turn off to Ban Mae Lana, Nam Bor Pee (Spirit Well) is a large sinkhole / collapse / doline located in amongst the acute, jungle covered limestone peaks. Getting there isn’t easy as it involves a 3 kilometer uphill trek before arriving at the rim of a dramatic 200 meter diameter, and 130 meter deep, depression in the terrain.

The starting point for the trek is the small Lahu hill tribe village of Luk Koh Larn. We arrived early and after organizing a couple of local guides (guiding fee = 200 THB per person) set out on the energy sapping hike with blue, sun filled skies above. I say energy sapping because that’s exactly what it is. The gradient for a lot of the upward trek is quite severe and a reasonable level of fitness is recommended if one is planning to visit the site. For the most part – 2.5 kilometers at least – it’s all uphill going with the track only leveling out in the final 500 meter approach to the rim of the sinkhole. There are a number of thatched rest spots along the way where you can catch your breath while admiring the spectacular vista back down the valley and beyond. Be prepared to sweat and above all, take at least two bottles of drinking water before setting out. 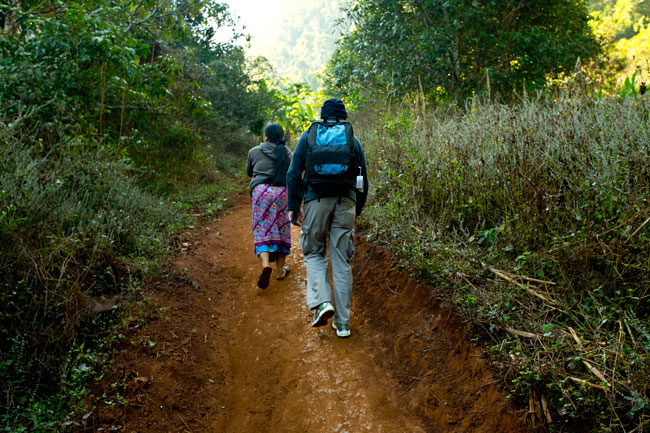 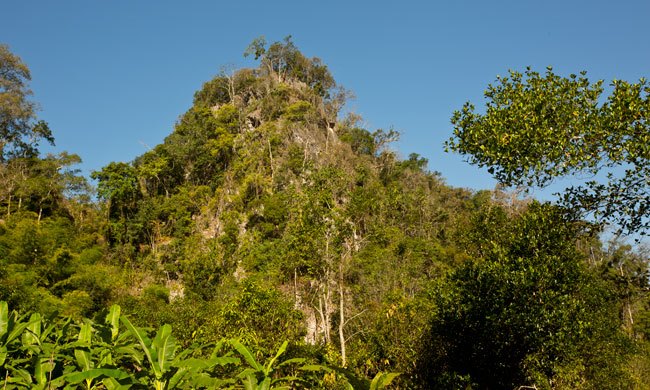 In contrast to Bangkok; bright, sun filled skies above 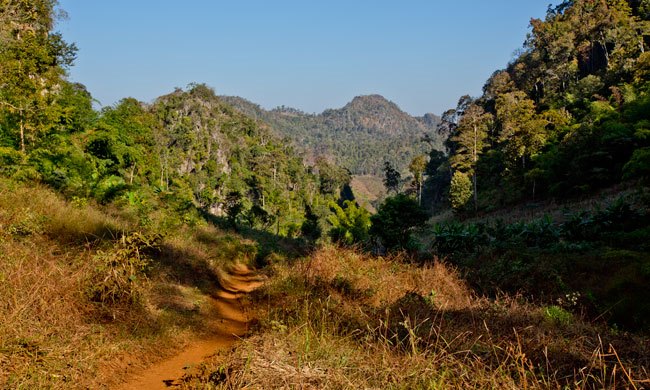 Looking back along the trail; one kilometer down, two to go 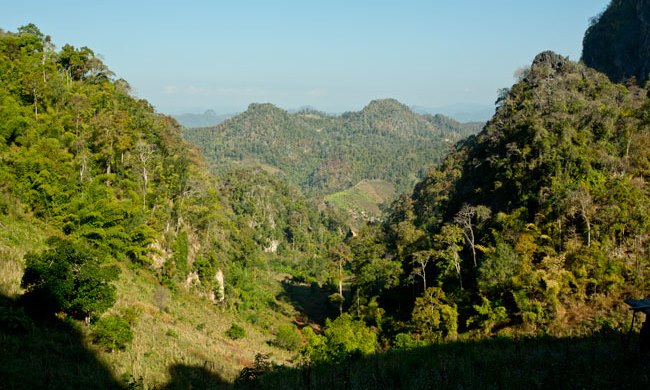 Two kilometers completed with the village visible in the distance 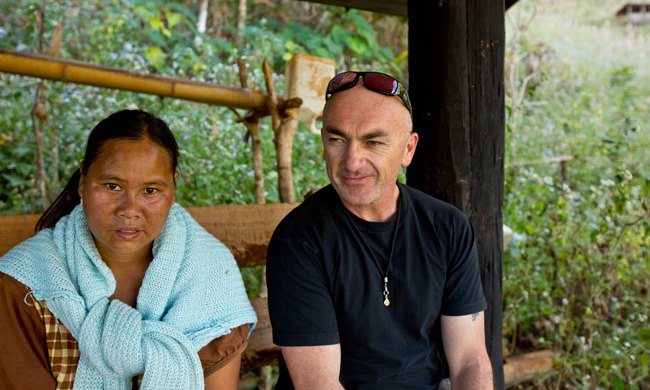 Taking a breather at the two kilometer mark; Andrew with one of the guides 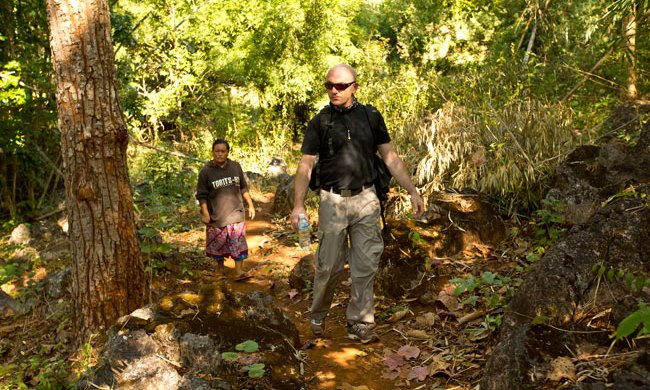 Almost there; the track leveling out near the rim of the sinkhole 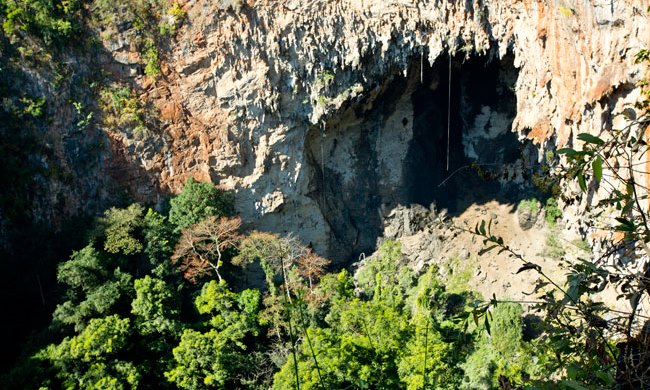 Looking down into the bowels of Nam Bor Pee (Spirit Well) 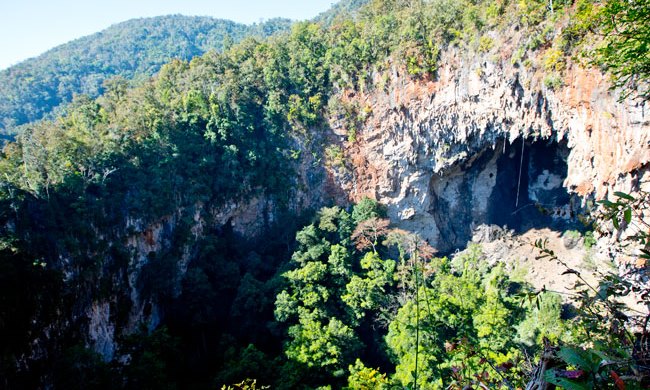 
Depending on what kind of pace you set for yourself, the trek up to the rim will take between 1 – 1.5 hours. There is plenty of signage up near the top of the peak to guide you in and the final approach section of the trail is indicative of nearing the rim; the trail descends downwards for 200 meters or so. For safety the local authorities have installed wooden barrier rails along the part of the trail which skirts the rim. At certain locations it’s possible to get right to the edge for a better view but extreme care should be taken as the drop into the hole is sheer.

As the others made use of the bench seats at one of the viewpoints, I climbed over the handrail and moved right up to the edge of the sinkhole in an effort to get unobstructed shots. The skirting edge of the collapse, although having sporadic gaps enabling a view into the bowels, also has broken barriers of jagged rock blocking a more widespread picture. After a few minutes of pushing through the scrub and negotiating the broken terrain, I was leaning out over a precipitous rock getting some good shots from a better position. A few minutes later I was back with the others at the viewpoint and checking out the echo effect as we bellowed out across the sinkhole. I asked one of the guides if it was possible go to the bottom and was told it was quite difficult a trip which involved an overnight stay as climbing down was a lengthy exercise which included rope work. We were also told that most people who spent the night down there were unable to sleep due to the constant echo effect caused by the wind. Perhaps this is where the locals got the idea that the site was inhabited by ghosts?

After getting plenty of shots and taking a few minutes respite it’s time to make our way back down the Lahu village where Andrew wants to spend some time getting more shots of the local inhabitants. 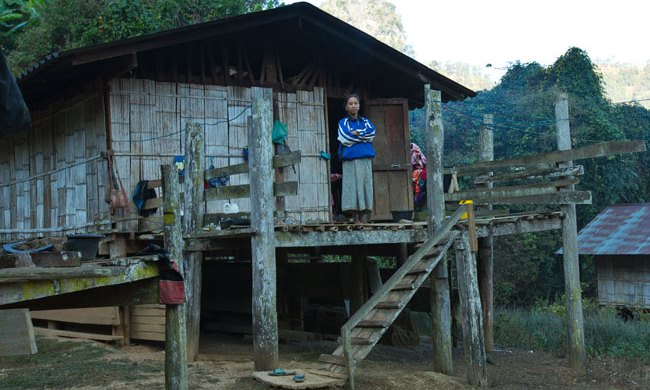 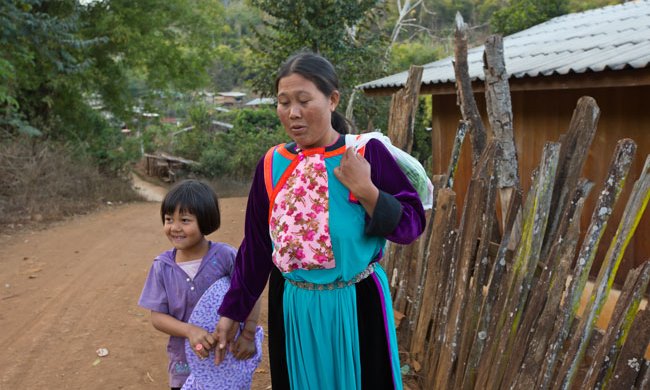 Lod Cave is probably the premier mainstream tourist caving attraction in Mae Hong Son. Situated approximately ten kilometers North of Hwy 1095 the road in branches off at Pang Mapha and takes you directly to the parking area at the entrance to the site. Unlike Mae Lana Cave, which is more of an Indiana Jones style of caving trip, Lod Cave is set up for the droves of tourists which visit the site each day. Thai style open air restaurants including som tam stands are lined along one side of the car park and as you pass through the park check point, there are a hoard of fish food sellers lined along the approach road.

The walk to the cave entrance is an easy 600 meters (from the car park) and the properly constructed pathways pass through a wide expanse of manicured open lawn areas set up for camping and picnicking. The last part of the track in – roughly 300 meters – is dirt and follows the river which runs through the cave. The trip into the cave is a two option scenario. The first and least expensive (free) is to keep following the track along the right hand side of the river. This will eventually take you up into the first and largest chamber in the cave. Be warned, however, that there is presently no lighting system in the cave so if you want to go DIY style you’ll need to bring your own torches or hire a kerosene lamp back at the park entrance. If you want to see the three chambers within the cave system you’ll need to hire a bamboo raft and to make the tour a better experience, a local guide. The raft is 400 THB and the guide is 150 THB. 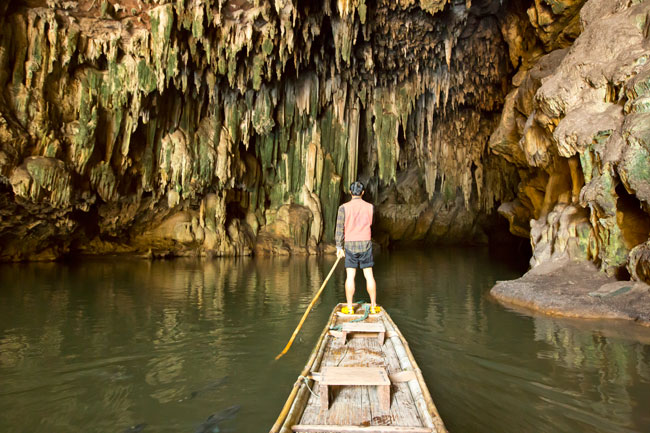 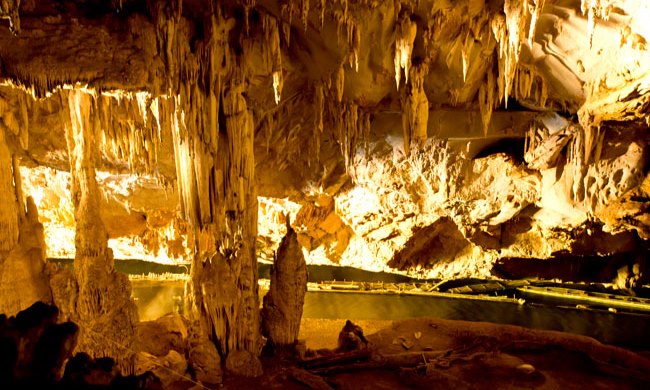 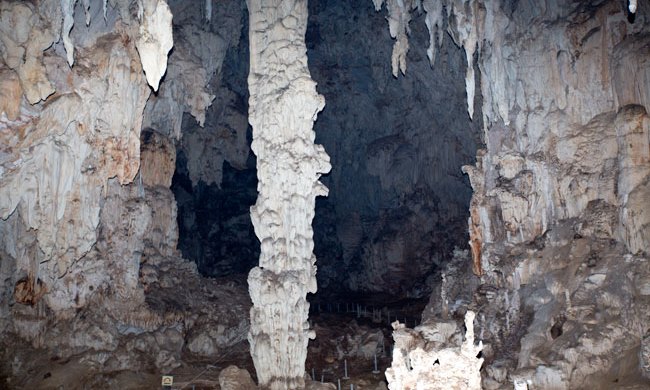 Impressive formations in the first chamber; the vertical one in foreground is 20 meters in height 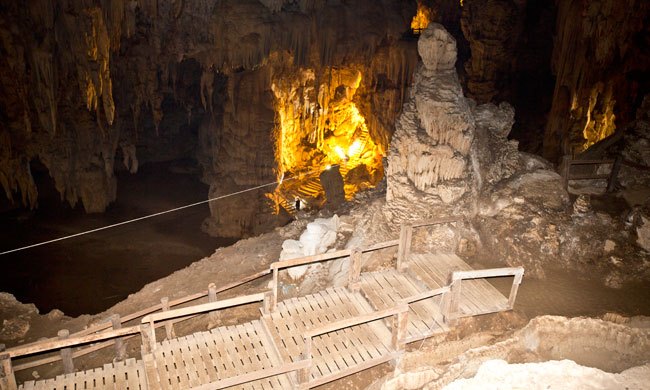 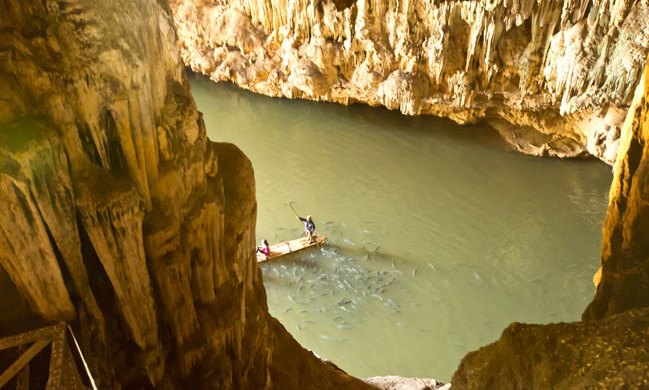 The far end of the cave (and river); looking down from the third chamber 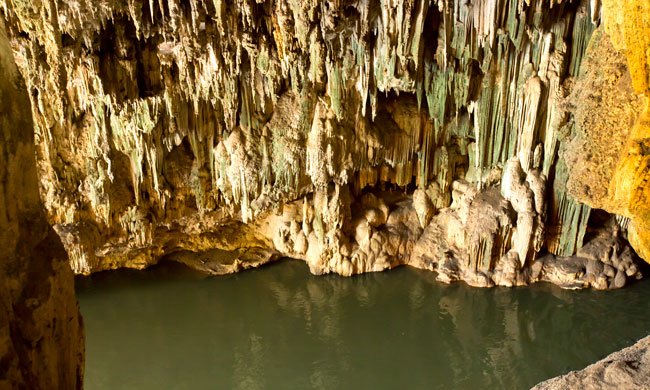 Beautiful colours along the cave river 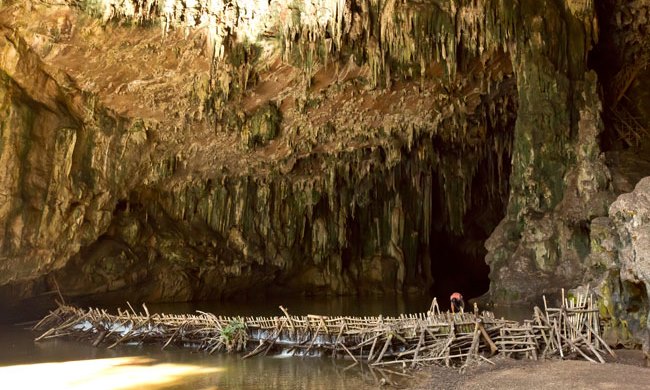 
The guide poles the bamboo raft at a leisurely pace through the cave. There are designated stopping points for going up into all through chambers inside. As mentioned, there’s no internal lighting inside so you will need lights to be able to see the formations and also from a safety stand point. Properly constructed access has been put in place at all three chambers with solid wooden stairways and boardwalks in place to make the tours more enjoyable and safe. The first chamber is the largest and the most impressive with big formations throughout. Doing the full tour with the raft was worth doing once but if I was to go again, I’d spare the expense and just do the first chamber.