A Trip into Mae Hong Son: Part One – Tales of Caves, Coffins and Hill Tribes

As our team of hill tribe caving guides leads us along the narrow trail I look out across the expanse of the terrain sloping away below us and marvel at the beauty of this remote, mountainous region in the far north west of Thailand. 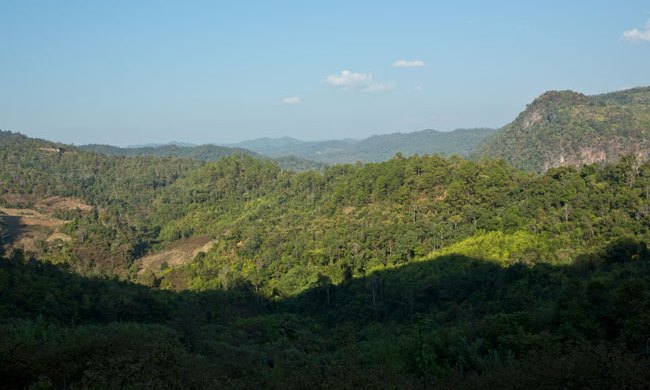 I and good friend, fellow adventurer and accomplished photographer, Andrew McNeill, are on the first day of our exploration into an area which by Thai tourism standards is still relatively undeveloped. We’ve travelled here for a dual purpose; mine is to have a look at some of the cave sites in the area and Andrew’s is to photograph the hill tribe people. Thinking prior to arriving here that we’d need to travel to different areas to achieve our individual objectives; we’ve landed in a location where both are in close proximity to each other. Perhaps it’s more to do with the fact that caves generally are in more remote mountainous terrain and under normal circumstances, that’s also where the hill tribes tend to be located. Our target area was Ban Mae Lana – just off Hwy 1095 – and during the drive into our intended destination we passed through a village populated by what is known as the Black Lahu people. After getting settled in at a small guest house at Ban Mae Lana – The Mae Lana Garden Guesthouse – we drove back up to the Black Lahu village (Ban Ba Jo) with the intention of getting some good shots in the late afternoon light. The owner of the guesthouse, Ampha, has also arranged for a guide to take us up to the nearby coffin cave. 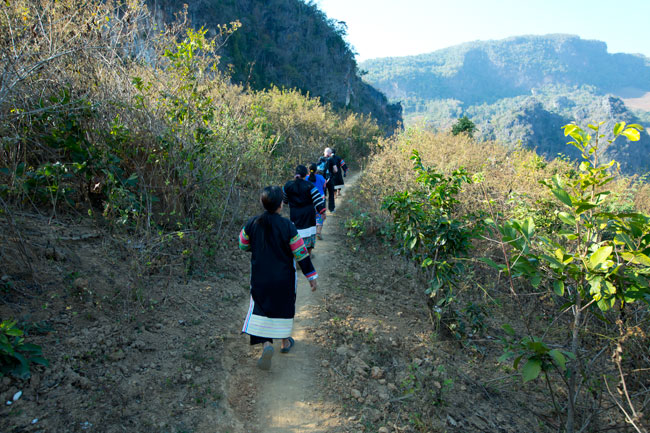 The trail is more of a single file dirt track which wends it’s through thick, hillside scrub. After a few hundred meters we’re at the base of a near vertical cliff line which seems to disappear into the clouds. Our guides stop for a breather and indicate towards a rough-hewn wooden stairway; which, no doubt, is the way up. Two of our guides aren’t carrying torches so they’re told by the more senior members of the team to sit this one out and wait at the bottom; perhaps they’re trainees. Whatever the case the cost for Andrew and I, for the tour, is still a bargain at 300 THB each. While we’re waiting for our guides to sort themselves out Andrew and I prepare ourselves for trip up the cliff face. We’ve both found that bandannas are essential piece of kit when it comes to hiking/trekking/adventuring. Wrapped around the head they keep the perspiration out of the eyes and reduce the irritating small distractions that come into play when one is involved in this type of activity and trying to bang off some decent shots at the same time. With mine firmly tied in place, and my head light mounted, it’s time to make the ascent up the wooden stairway. With the senior guide leading the way we’re soon clambering up what can only be described as a very agricultural series stairways and ladders. The locals have done their best to provide reasonable access, with the resources available to them, and a lot of the construction seems solid enough but extreme care is still needed in negotiating the way up. The access way has been built in sections to conform to the lay of the cliff face. Some sections are nothing more than a run of near vertical ladder while others, where the cliff face has a less acute gradient, are an inclined stairway. A few minutes later, breathing hard and with the perspiration beginning to trickle down the back, we’re standing at the entrance to the cave system. 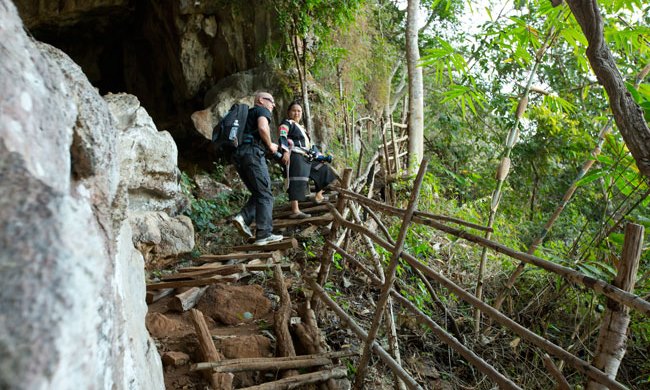 Andrew and the lead guide moving up the ladder system 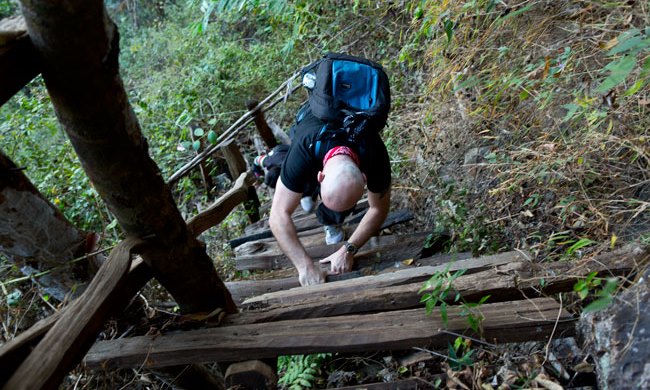 After a couple of minutes to get the breathing rate down the lead guide takes us around some large boulders and down into the entry chamber. She smiles warmly and points to what looks like a long wooden canoe sitting upside down on a supporting frame. We move in for a closer look and the opportunity to get some shots. The cynic in me has me thinking it’s still a canoe but a closer inspection reveals a very symmetrical, six meter length of hollowed out log. There is actually two half shells and, although the one on top is in a better state of repair than the one underneath, it’s apparent that the coffin was constructed by splitting a section of tree down the center and then scooping out the insides to leave a thick walled inner hollow. It’s also apparent that there’s no possibility of the device having ever been a canoe as it’s completely straight with blunt ends. It also looks rather heavy and I can’t but be impressed by the effort that must have gone into getting the thing up the cliff face to its resting place. After getting some nice shots the guide turns on her torch and indicates we’re about to move further into the cave system and, by extension, into a dark zone. She leads us up another short wooden ladder and then down into the first inner chamber where there’s another coffin half shell lying on the cave floor. There’s still plenty of ambient light about for photography without the use of the flash so I adjust my settings for low light. A couple of minutes later the guide leads off further into the darkening cave system where there’s another wooden stairway to negotiate in the more spacious second chamber. Handrails have been put in place for safety along the traverse so we stop for a moment to check out the jumbled mass of rocks, and small formations, in the vacuous space beyond. 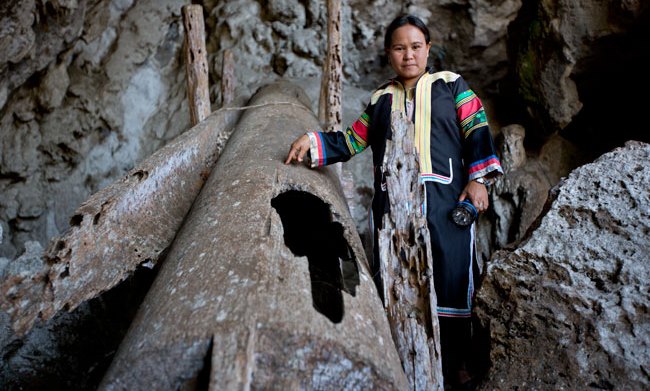 Our senior guide pointing out the first teak wood coffin 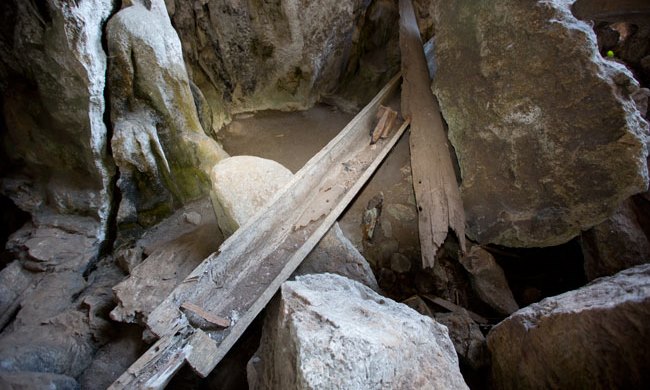 Further into the cave system and another teak wood coffin 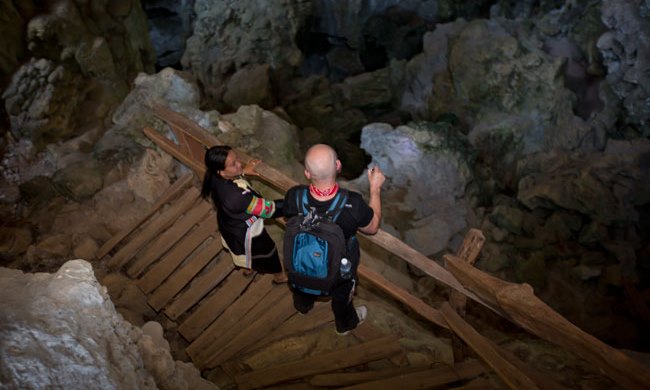 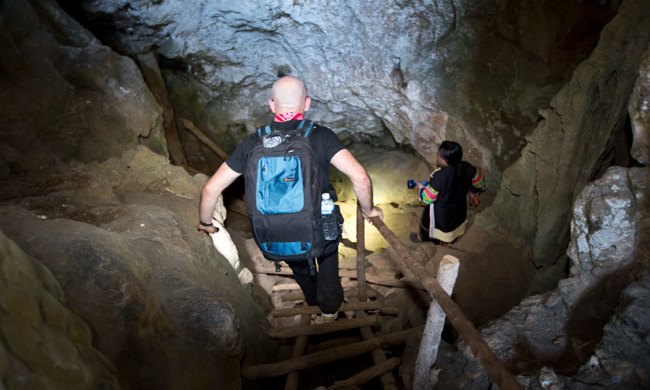 Down into the bowels of the third and final chamber 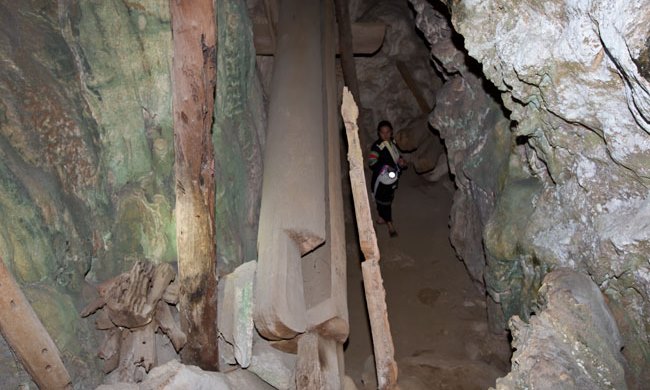 The dust covered 2500 year old coffin in the third chamber 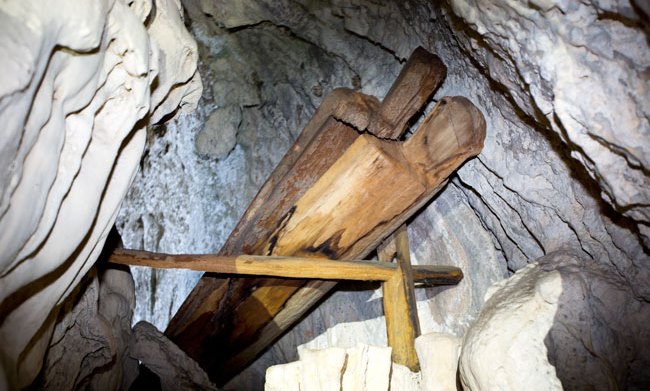 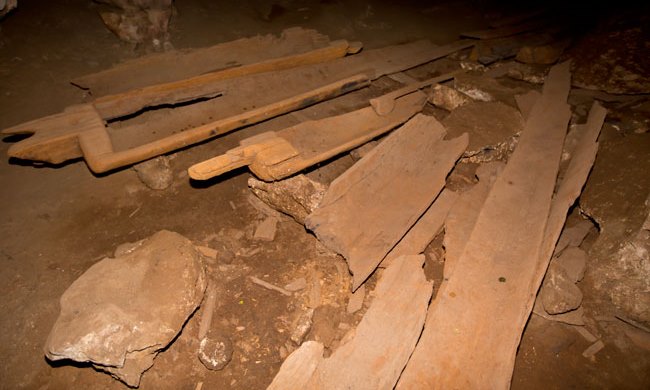 In comparison; the broken up coffins of Lod Cave

The guide moves on again and leads us up out of the second chamber, across a short rock shelf, and then down another rickety ladder into the bowels of the third, and final, chamber. She shines her torch on two amazingly well preserved coffin half shells lying at an angle against the cave wall. I move in for a closer look, and the chance to bang of some photos, as the guide indicates with her torch to another coffin high up in a back crevice of the chamber. Both coffins are incredibly well preserved but the one above us, amazingly, still has the wood grain colourings on it. I ask the guide for her opinion on how old the coffins are and she replies “song pun ha pee tii laew.”

Two and a half thousand years old already; we found that concept hard to accept but one thing in favour of that being an actuality is the fact the cave is dry. I mention this because a couple of days later I visited Lod Cave and found, much to my disappointment, the coffins there were largely a disintegrated pile of lumber. This situation, after a bit of assessment was easily explained; Lod Cave, due to the fact that it’s part of an underground river system, had a much higher moisture content inside. Moisture creates dampness and dampness causes rot. The cave we were presently in was well above any river system and, as such, moisture levels within were virtually non-existent; the internal dryness being obviated by the dust deposits on the coffins. In my limited Thai I asked the guides “who had placed the coffins in here all those millennia ago?” The only thing she could tell me was “Pee Marn.” Loosely translated this means some kind of ghost she didn’t think very highly of. When I visited Lod Cave the info boards, near the coffins, said almost the same thing calling them the Ghost People. A later check of Wikipedia revealed a small amount of info which seemed to make more sense; the coffin makers, and placers were known as the Lawa people and were briefly described as the early inhabitants of the area prior to the arrival of the Tai. 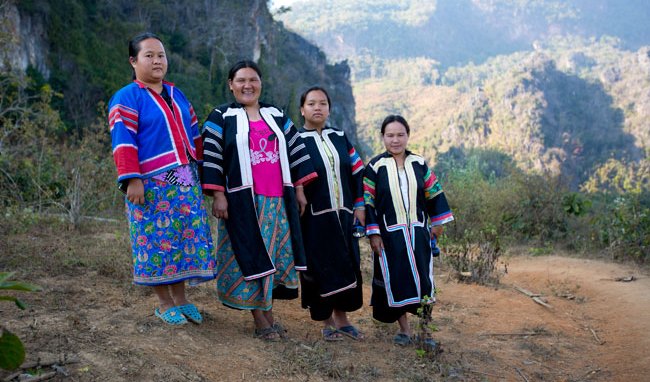 The Black Lahu girls; our guiding team to the coffin cave

The fact is that most, if you’ve travelled about the northern regions of Thailand, have probably heard of the Shan, Karen and Mon peoples. Knowledge of the above mentioned is also by way of the news media in reports on hill tribes occupying the border areas of Thailand and Burma. The information we get portrays an ongoing stateless situation for these tribes as they apparently inhabit a grey zone between the two countries. Prior to making our trip I’d never heard of the Lahu people – there are Black and Red Lahu – but another check Wikipedia confirms they’re of Tibetan-Burman origin. Although our guides, when asked of their origins, were quick to reply they were “Thai.”

I finish getting the shots I need and motion to our guides we’re ready to head back. It’s been an interesting foray, to say the least, and the preserved condition of the coffins is quite remarkable. The guides confirm our opinions on the numbers of sightseers that probably visit the site; due to the difficulty of access, very few. A few minutes later we’re working our way back down the ladder system. My concern for the structural integrity of some of the wood work is confirmed as I near the bottom; a piece of the handrail, I had a solid grip on, snaps off. Luckily I’m only two steps away from firm footing so I’m able to arrest the fall before any serious injury occurs. With everything in order, we thank our guides for their efforts and make our way back along the trail to where the vehicle’s parked. We’re actually heading up the hill to their village for phase two of the afternoons outing – doing some hill tribe photography – so we offer the four ladies a ride. Andrew is getting quite excited about the prospect of getting some good shots as the light is almost perfect in the late afternoon. We park up, get our cameras sorted, and then begin roaming the village streets for photo opportunities. The village – Ban Ja Bo – is situated on a ridge with the road running straight down the center of it. The timber houses, on stilts, are clustered tightly on either side of the road and the locals are out, and about, as the suns dips towards the horizon. The following is a series of shots from the hour, or so, we spent at the village. 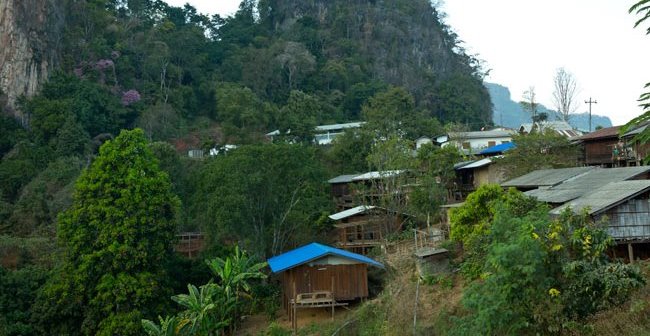 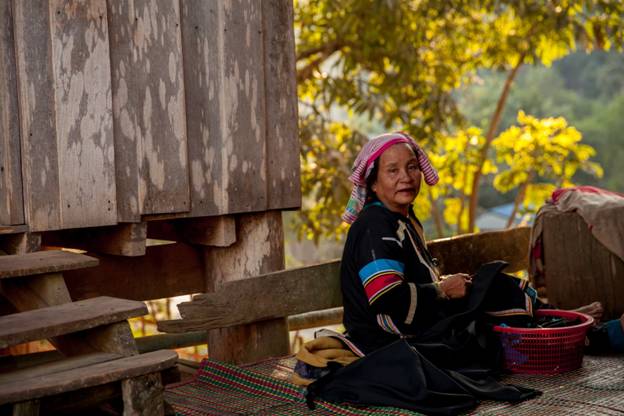 In her traditional garb; photo by Andrew McNeill 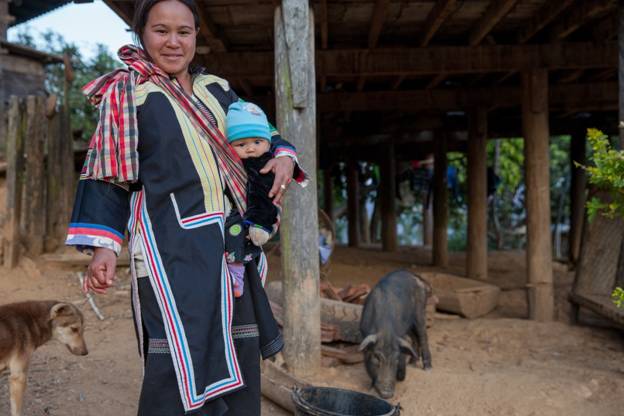 Our senior guide with her child and the family pets; photo by Andrew McNeill 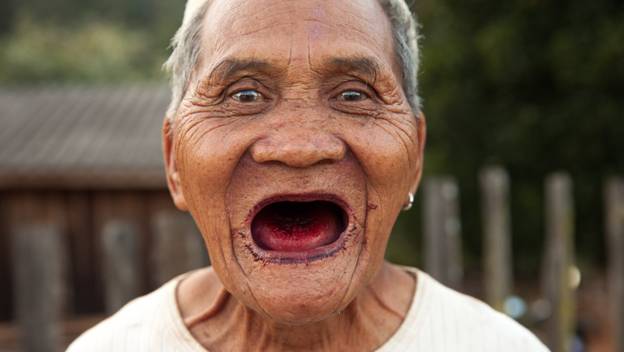 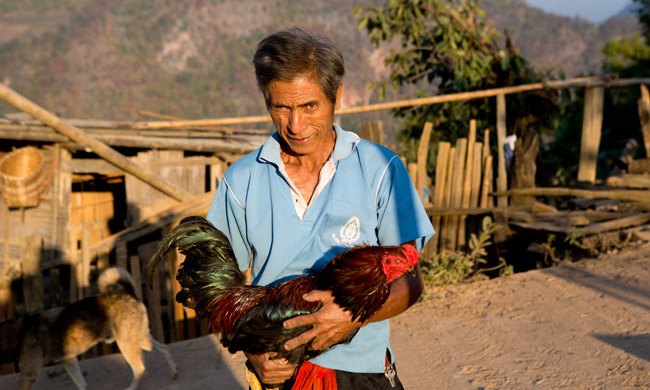 Proudly displaying his fighting rooster in the late afternoon sun 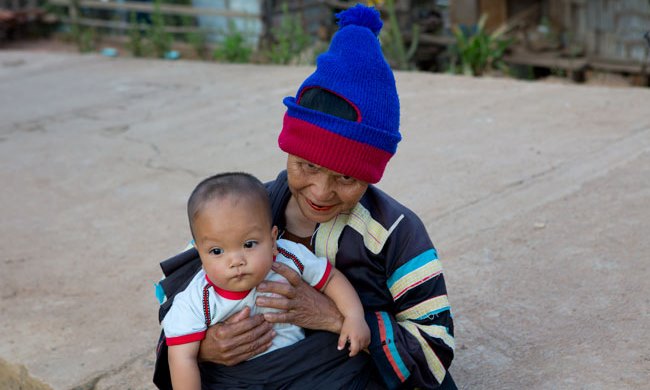 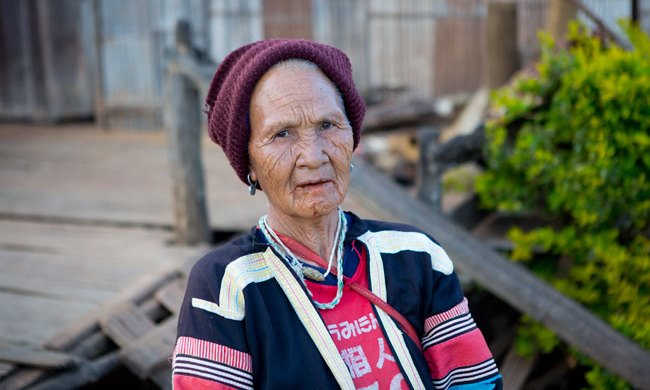 A face weathered by a life in harsh conditions 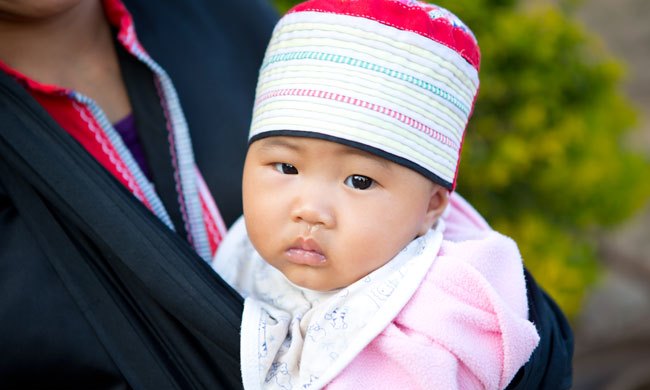 And a fresh face beginning his way in the world 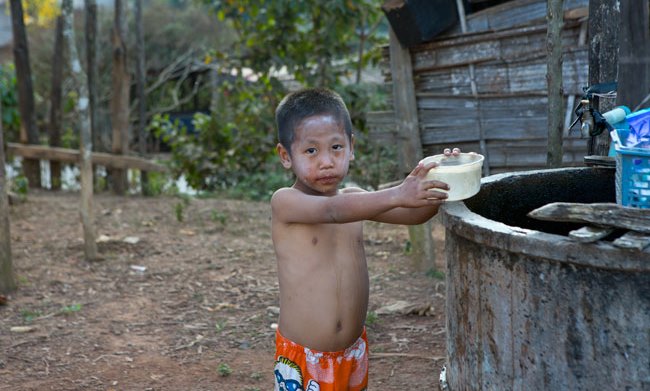 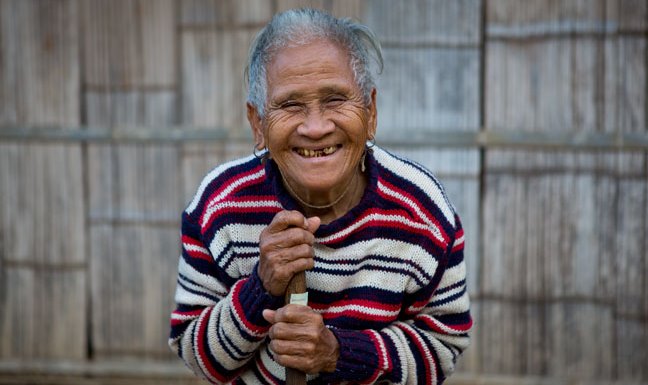 And the not so young 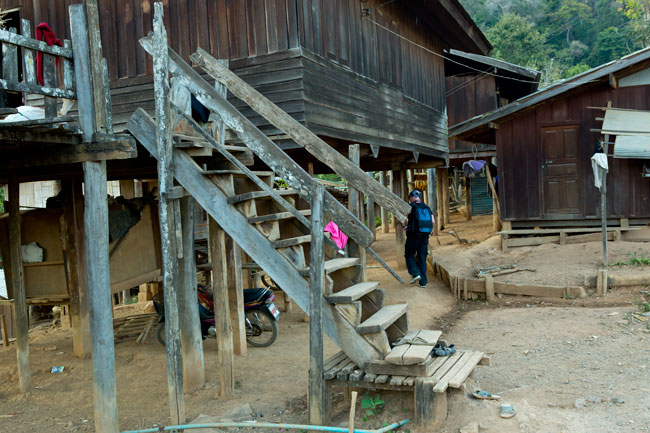 Andrew checking out the homes in the village

With the shadows lengthening and the coolness of the approaching evening beginning to take hold we decide, a bit after six pm, to pack up the camera gear head back to camp. With the early flight up to Chiang Mai, followed by the 200 kilometre drive over the mountains and the caving trip, it had been a long day. It was time to relax, and get well rested, in anticipation of the caving trip we had planned for the following morning.

Infidelity and Philandering: The Story of P