The Law of Unintended Consequences

At night, against an inky black sky with pinpoints of light for stars, smoldering redness dots the horizon as the sugar cane fields burn.

Night in an Isaan village comes quickly and the activity of the day subsides as men and women come home from the fields to a meal prepared by grandma, or elder sister, or a teenage girl. The steamy sun is replaced by the cold white light of a thousand TV sets, which flicker against the smoke from the dying sugar cane. 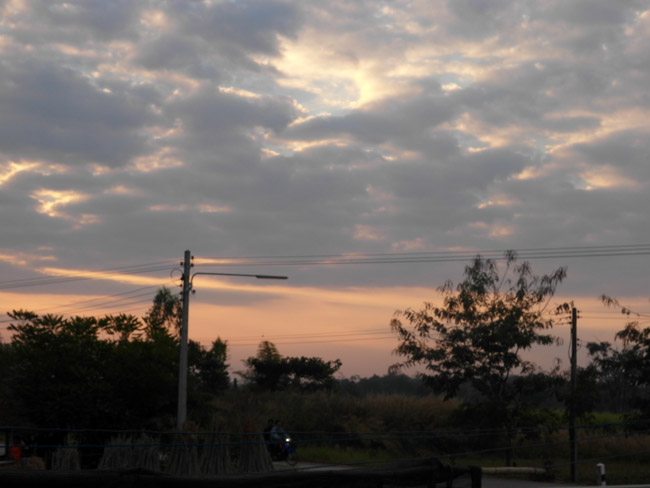 The trip up north, close by the Laos border, used to involve a 7-8 hour car ride, or a one-hour flight to Khon Kaen followed by only a two-hour car ride. The local municipal airport was open, but didn't seem to have any commercial flights going there. Now, however, Nok Air flies a 50-seat prop job daily to the provincial capital, an easy thirty-minute drive to my GF's village.

I went there to see how progress on the house was going, and to pay respects to the family, and see the kids, children of my GF's two older sisters, and to chill. A previous submission on traveling to Isaan (“A Day in the Life”) was responded to by many emails of great thanks, thanks for my telling them why they should never visit Isaan. People claim to have forwarded copies of the sub to their GF, but I don't necessarily believe everything that someone says in an email these days.

Economists call this The Law of Unintended Consequences. One sets out to do one thing, pass a law for example, and gets much different results than intended. Sometimes bad, sometimes not. The book Freakonomics demonstrated that a drop in violent crime in America in the 1990’s could be directly attributed to the easing of abortion laws after Roe v Wade in 1973. Less poor people were having babies who, 21 years later, were not committing crimes since they had never been born. The introduction of cycling helmet laws in Australia in 1990 caused a reduction in teenage cyclists (who thought helmets were not cool), thru causing a decrease in fitness. On the other hand, the drafters of the US constitution, wishing to give people the right to carry a musket, probably never envisioned the use of the 2nd Amendment to justify people carrying on the street concealed semi-automatic multiple clip weapons. In trying to paint a portrait of village life I unwittingly communicated to readers to stay away from visiting their girlfriend’s home, which was never intended by me.

The house, or should I say mansion, for it is by far the biggest thing not only in the village but I suspect in all the neighboring villages, is 95% complete. Which means, I suppose, that it is halfway done, and if the first half took about 8 months to do, the second half appears like it might last the rest of the decade to finish. Work has stopped since burning the cane pays more, and the house will still be there to work on later, but the fields must be burned now. 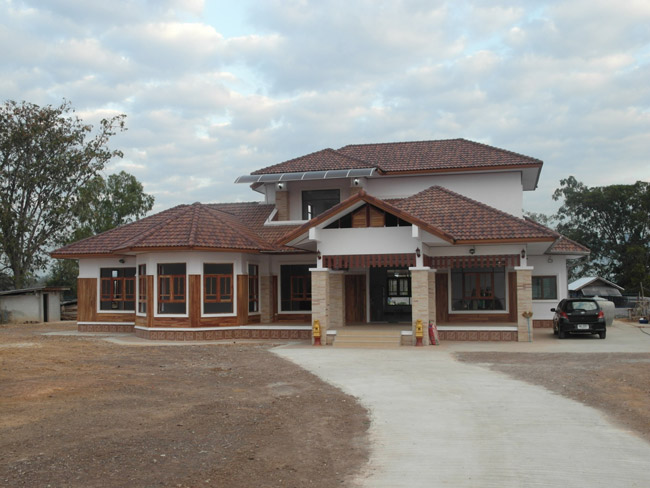 My GF is a superb project manager and I admire the way she has gone about supervising the construction. Having said that, she forgot the windows. Well, there are holes for windows, and frames for windows, but no actual glass in the windows. Which, since it is not rainy season, is no big thing, if you don't consider the bugs. 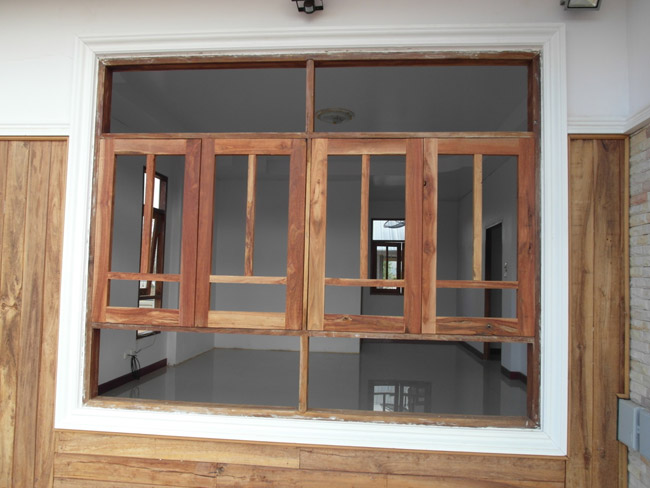 But she has decided we are sleeping in the new house, despite the lack of windows and, did I mention, no furniture. A big tree, it seems, has been bought, and cut up, and is now waiting transformation into beds, cabinets, tables, chairs and cupboards but first, of course, the sugar cane needs to be cut.

So we are sleeping in the big new house, with no furniture and no window panes, but we are safe from the bugs because Miss Project Manager was savvy enough to go buy a pup tent and some air mattresses and erect it in what will someday, the Lord Buddha willing, be the living room. 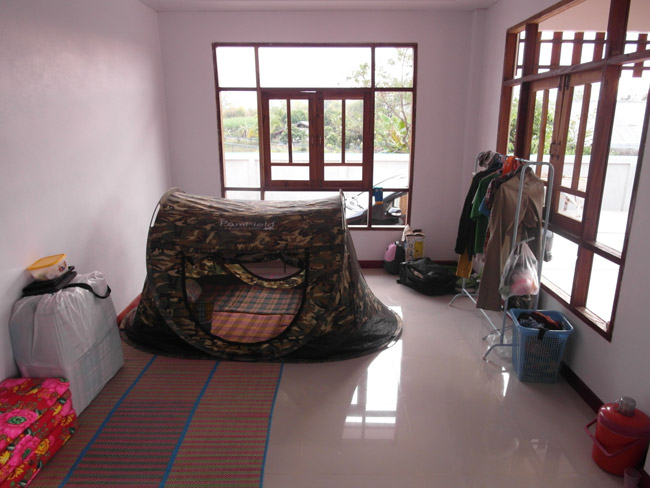 There is a kitchen, what mansion would be compete without a kitchen, but it doesn't seem to have any pots or pans, or a stove or cooking top that I can see, but older sister does just fine out back sitting on the ground burning twigs under a blackened pot. The food tastes great, and we eat it sitting on the floor next to the pup tent, washed down by copious amounts of Johnny Walker Double Black which I had the foresight to bring.

The house is set back from the road, and quiet enough for sleeping, being a good kilometer from the speakers from which the village headman makes his daily pronouncements every morning at 6 AM. Sleep is interrupted only by the rumble of huge 24 wheelers bearing massive loads of sugar cane to the factory up the road, and of course by myriads of roosters who for some reason were never taught that they should crow at daybreak and so crow when the sun hasn't even made a dent in the red, sugar cane field burning, sky.

Mornings in the Isaan village, which used to be painful to endure for the unceasing boredom, are now tolerable enough. 49 baht gets me a not half bad internet signal on my phone, and I can set up a tethering so I can connect my iPad and computer. As my girl sweeps the walk and makes offerings at the spirit house, I can download the morning newspapers, check my email and the stock market closings and even check out commodity prices, sugar cane being high on the list.

Speaking of offerings, while I am not a religious man, my girl has become a bit more spiritual after her illness, and now spends the night once a week at the local temple, and has a book from which she recites prayers she has written out in longhand when she goes to the spirit house with oranges, chocolate chip cupcakes and a green colored Fanta whose flavor I am still afraid to ask about. 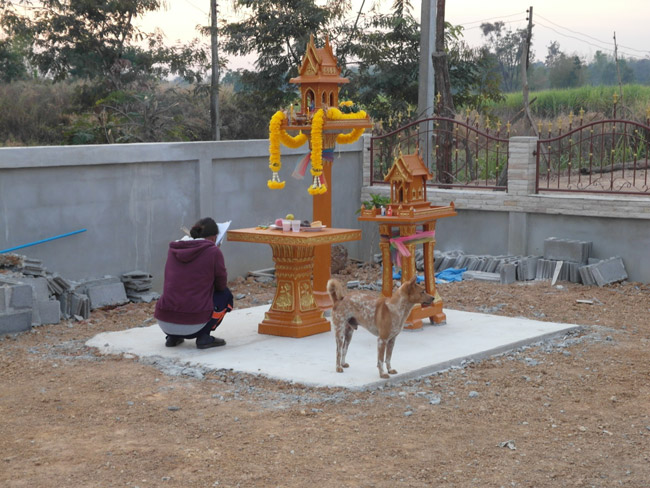 Life in an Isaan village is not that different from life in small villages everywhere. You can find similar dynamics in a small village in Greece, or Italy, or even the US or England as you do in northeast Thailand. Cultures adapt and thrive, and take from others what they need and make it their own. Now there is a brand new Tesco (British) superstore just outside the airport, near to a new Big C (French) and a John Deere tractor franchise (American) but they are as Thai as the red hot chili pepper used to spice up the food (chili peppers come from America and were brought to Thailand from India to which they had been brought by the Portuguese.) Even the Isaan people are relative newcomers to the land, most of whom had been forcibly brought over the Mekong from Laos in the 18th and 19th centuries as part of a "steal people to work the land" program. The Thai language was only introduced in the 20th century and most people from the region still speak a variation of Lao as their first language.

I'm back off to Bangkok tomorrow, for meetings and more meetings, and the BTS, and crowded walkways, bars and fine restaurants and pizza! But I'll miss the simplicity of Isaan village life, and will look forward to coming back. I hope I haven't dissuaded anyone from going, three visits at least should be made before you even think about marrying your girl, and an annual visit thereafter to keep both of you sane. 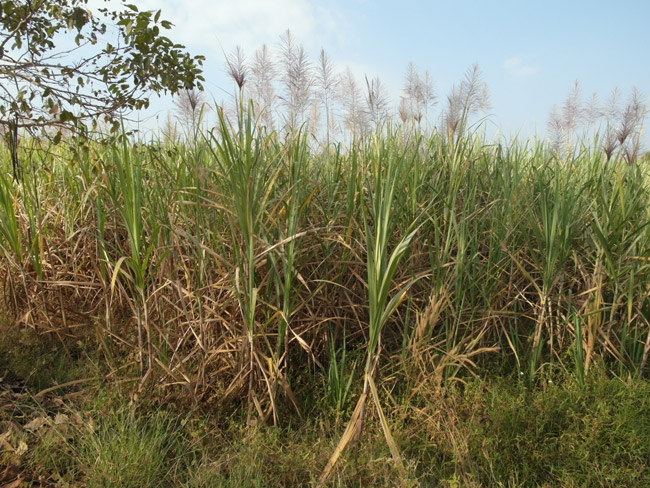 The mansion looks like it will be very comfortable when completed.

I have found the odd visit to an Isaan village an eye opener and very interesting. But for me, a couple of hours is enough. A lot of Westerners seem to end up in Isaan villages these days, but for me personally, there is no way I could live that life – and it's not just because I am a bit city boy. I have spent many day-times in a village in Chaiyaphum and have overnighted a few times in Khon Kaen, the latter being a considerably more comfortable experience – in the home of a foreign friend. But to me life in an Isaan village is like being on another planet. Not bad, just different, and a type of different I personally wouldn't care for long-term. As an experience, great, but long-term, no thanks.

I know a lot of foreigners say they like living in the Isaan, but it seems to me that most appear to be there because they don't have a lot of choice. Perhaps their finances are meagre and life in Isaan does, admittedly, allow one to live on next to nothing. Or perhaps their wife said she is going back to her village, the implication being that if he wants to be with her he has to follow, almost like an obedient dog following its master.

In Support Of (Some) Women