My son came out to visit from the States and after a few days in Phuket we flew up north to Chiang Mai. I have been going to CM for 25 years now and always delight in seeing how the place has changed, and stayed the same.

We stayed at a fantastically expensive hotel called 137 Pillars which is amazingly beautiful. Supposedly, it was built on the remains of the house of the son of Anna Leonowens. You might know this woman as the author of a book The English Governess at the Siamese Court, later adapted into a movie named The King and I with a second movie called Anna and the King. 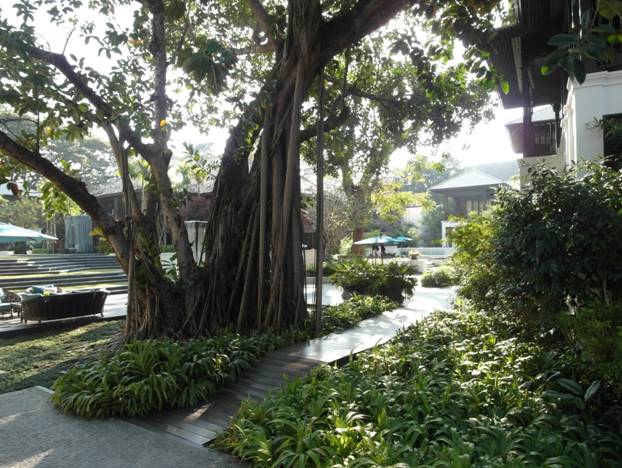 In Anna’s book she described how she was born in Wales, married a dashing English army officer, was sent to India where he was killed, leaving Anna alone with her young son. She accepted a posting as Governess in the Court of Rama IV (Yul Brenner in the first movie), met the libertine King, taught him English ways, and was with him on his bedside when he died.

Very little of this is true.

The truth is much more interesting. Anna was born in India, of “mixed blood” (her grandmother was Indian). Both she and her younger sister had swarthy complexions, which caused her to be ostracized by the British surrounding the Thai court. (Her younger sister, by the way, married at 15, their daughter married a Hungarian count and their grandson later moved to America where he became famous in cinema as Boris Karloff).

Anna moved to Wales when she was young, but when she was 14 ran off with the local clergyman and sailed, unchaperoned, back to India. She later met and married a civilian clerk who gave her several children before he died of syphilis in Penang. Anna accepted a job teaching English (not as Governess which would have been a better position) and, sending several of her children back to England, sailed to Siam with her youngest son. It is questionable whether she ever met Rama IV, she being of too lowly a stature, and she certainly was not there at his death, having returned to England several years before. The libertine king she describes was actually a monk until his fifties, having turned down the kingship in favor of his younger brother (Rama lll).

My favorite part in the original movie (still banned in Thailand) was when Rama IV’s harem comes in to greet Anna. If you listen closely they are all speaking Cantonese. One can imagine a Hollywood producer in the 1950’s demanding 50 Thai extras and being told there aren’t that many available. So they went to Chinatown, got 50 Chinese, dressed them up as Thais and told them to chatter away in their native tongue.

Chiang Mai has a tremendous number of temples, which I will spare you the many pictures of. We had the fortune to appear at one while a monk graduation ceremony was going on. While I am not religious, I am comfortable with people who are, and it pleased me to see so many young men supporting their faith. My Thai girlfriend, in recovery from a life threatening illness, has been spending the night in her local temple every 7 days (depending on the phases of the moon) and her 30 year old brother, a drinker, smoker and womanizer, recently spent three months in their local temple as a monk (after which he returned to being a drinker, smoker, and womanizer). 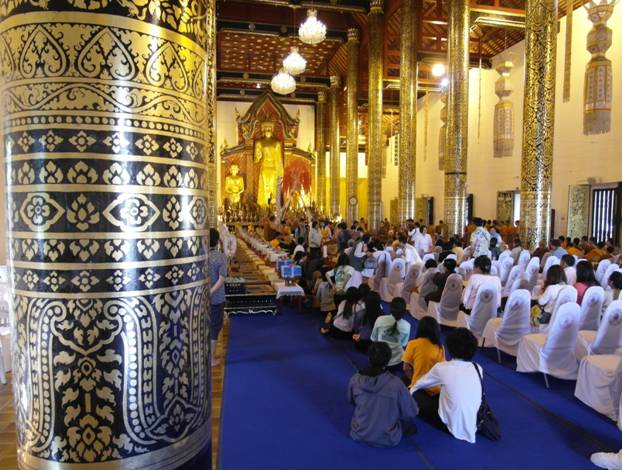 We then drove up into the mountains to Doi Suthep, one of the most important temples in the area. One can take a cable car or walk up the 300 steps. At the top there is a sign for foreigners to pay admission of 30 baht. 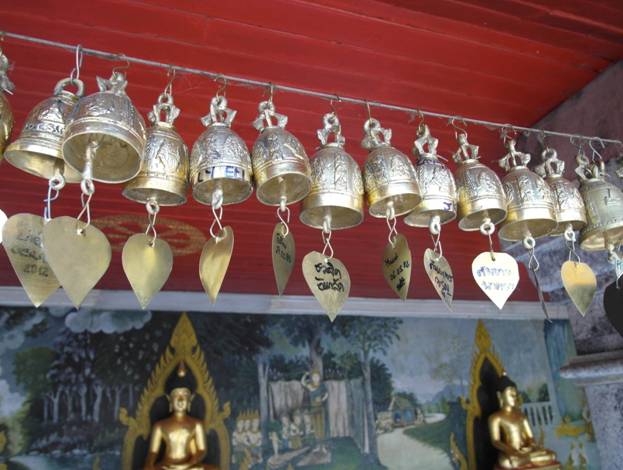 I first encountered dual pricing about 30 years ago in Mexico, and was suitably shocked. I complained to a Mexican friend of mine who responded “This is our patrimony, and all Mexicans should be able to visit it for free. This is not yours, you are a tourist, and it is right that we charge you for visiting it.” Virtually every developing country I have been to…almost every country in Asia but also in South America and Africa, charges more for tourists to visit certain sites than locals. I have no problem with this. As a general rule (there are exceptions) we earn more than the locals and I have no problem paying more to visit an ancient site or temple.

I understand many people feel differently but as I get older I get more tolerant. I also accept and understand developing countries putting prohibitions of foreigners buying land…even a developed country such as Singapore does not allow foreign land ownership.

One thing that did upset me years ago was when I was checking out of the Taj Hotel in Mumbai, one of the most expensive hotels in India. My bill was quite reasonable but the clerk suddenly snatched it back with an apology as he had charged me the local rates. I protested saying that any Indian who could afford to stay at the Taj could certainly pay full freight, but I ended up being charged double. Tourist sites I can accept dual pricing, but not for restaurants or hotels.

Anyone is welcome to attack me on this.

Lunch was at a quiet spot overlooking the small river called Ping. Only Thais went there and the food was excellent. There was, for some reason, erotica on the way to the toilets, which seemed a bit out of place in this peaceful setting 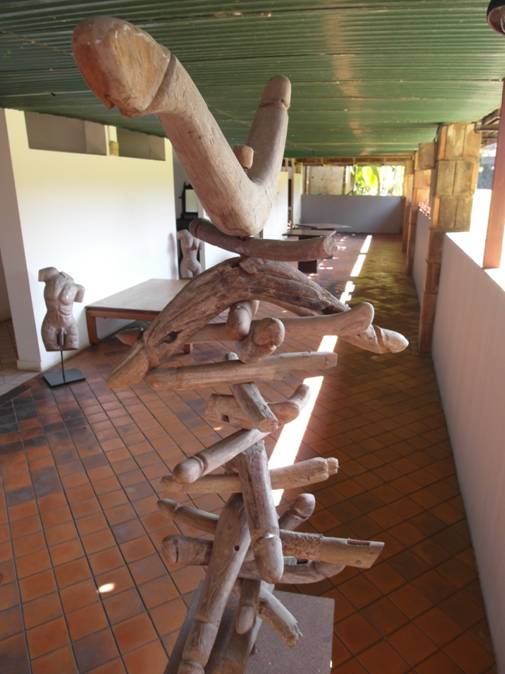 Moving on, we went back into the mountains the next day and did something called “ziplining”. Basically you stand on a platform many meters up in the air and zip down a wire to the next tree, being strapped into a harness. We did this for about 2 hours, zipping from tree to tree, sometimes abseiling down to the next platform. At my age I would have rather spent the time chatting up a lovely lady, but my son wanted to do this and it ended up being great fun. 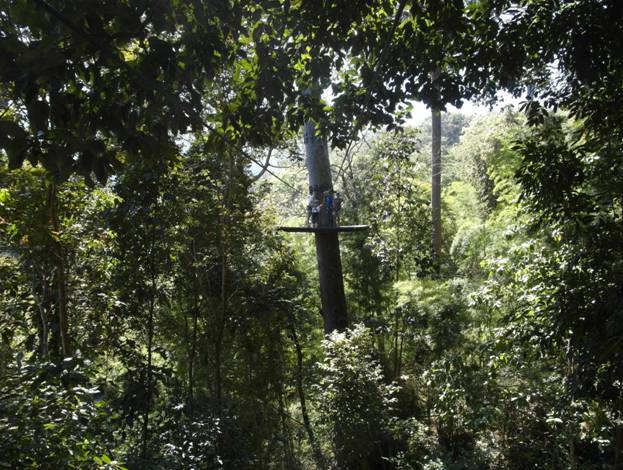 Now back in Phuket for another week of holiday with my son, then he is off back to the States and I will start traveling the region again, with trips planned to Bangkok, Hi Chi Minh City, Yangon, Phnom Penh and Hong Kong. I will need to fly up to Isaan for a few days to check up on the house my girlfriend and I are building which should be almost completed and perhaps we might do the monk ceremony for it.

PS: Has anyone seen these signs at a local Optical chain? I have gone into several shops asking why the discount was exactly 51.8647% and have not gotten a clear answer yet. But it’s fun watching the confusion on the salesclerk's face as she tries to explain something she doesn’t know the answer to.

PPS: I am thinking of starting a t-shirt slogan contest. Readers would send in the best thing they have seen written on a t-shirt in Thailand. Have to be real, and have to be actually worn (not seen in a shop). Yesterday I saw someone whose t-shirt read “Cover me in chocolate and throw me to the lesbians”. I really don’t understand this.


As far as t-shirt slogans go, "I like studying Engrish" was one I saw recently!