After sampling the delights of Phuket Island (more about that later), my mate and I decided to get into the car and cross over onto the mainland. From my place it’s about 20 minutes to the Sarasin Bridge. The checkpoint was pretty active but we weren’t stopped; however, I did see a Hilux full of what appeared to be Indians getting a pretty good going over.

About another 30 minutes on we pulled off to visit a cave and Buddhist shrine named Wat Tham Suwankhuka (Heavenly Grotto Temple). There was no sign but I guessed the right place to turn. After about 3 kilometers I spied off to the right a few minibuses and pulled in. It seemed to be the right place. 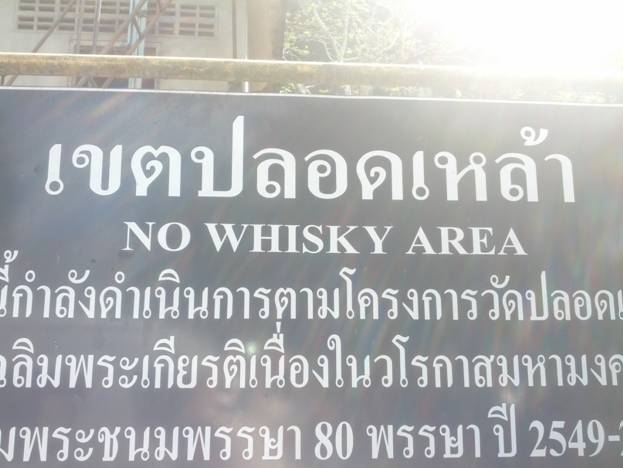 After fighting through the phalanxes of monkeys, we paid our 20 baht admission and entered the grotto. There was the standard complement of Buddhist images. 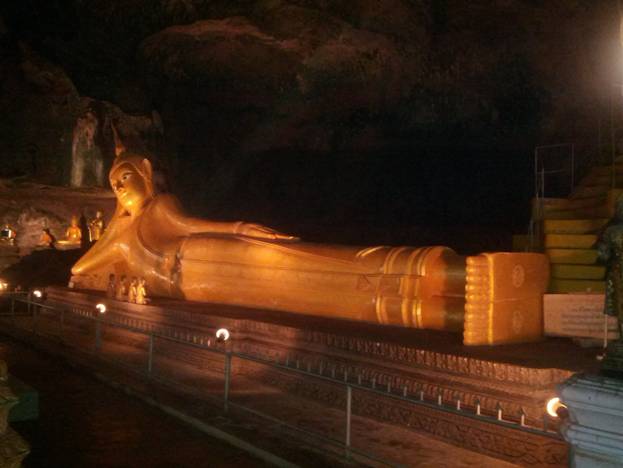 But the next cave I found interesting. There was official graffiti from the Kings of Thailand who had visited the cave, including Rama V, VII and IX. 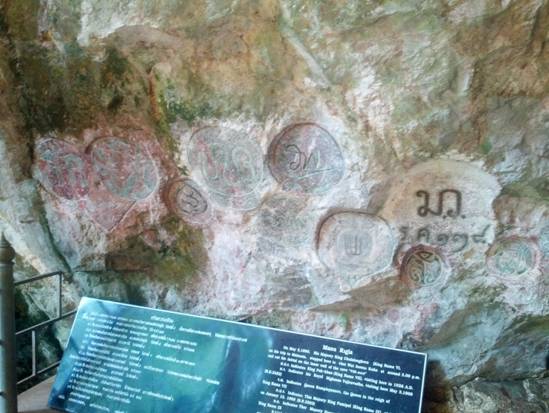 However, this being Thailand, the very next cave had an admonition against graffiti, right next to a wall of graffiti. 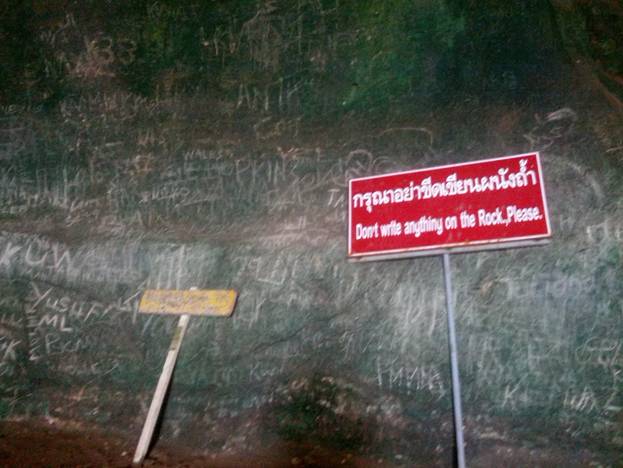 Getting back into the car we drove another 15 minutes or so past the town of Phang-nga to the Sa Nang Manora Forest Park. Not a soul there, no entrance fee, a poorly written map good for toilet paper and we were on our way. 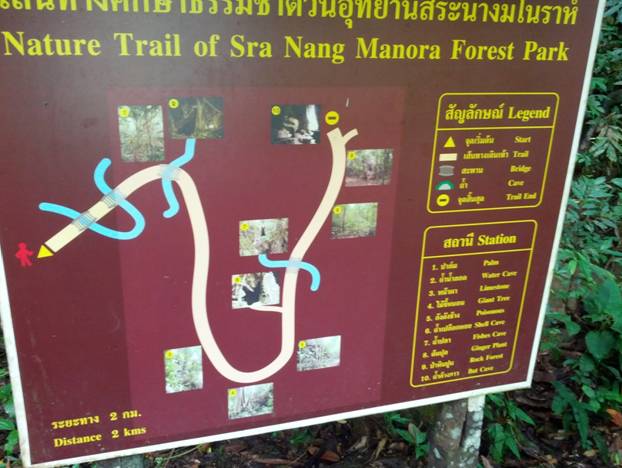 The path followed up a series of cascades. 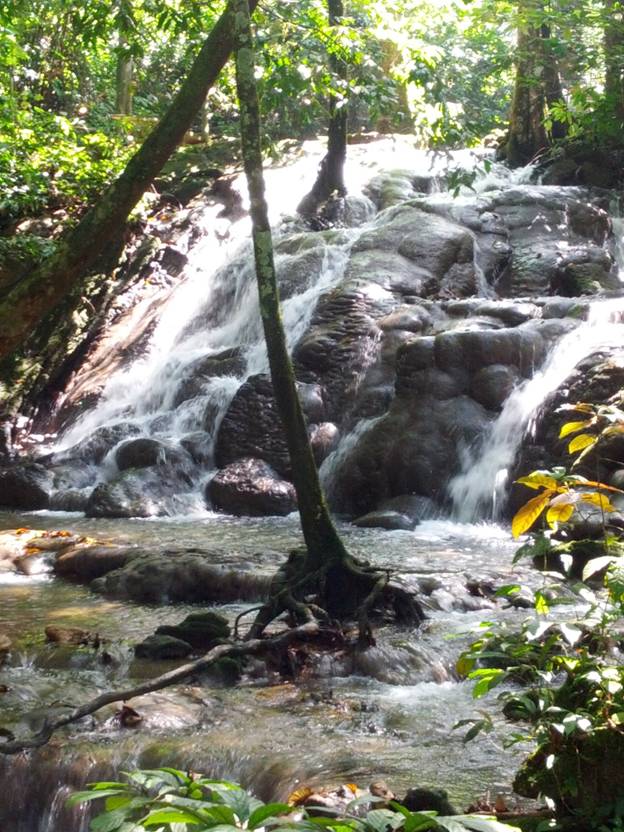 But you are never far from civilization. 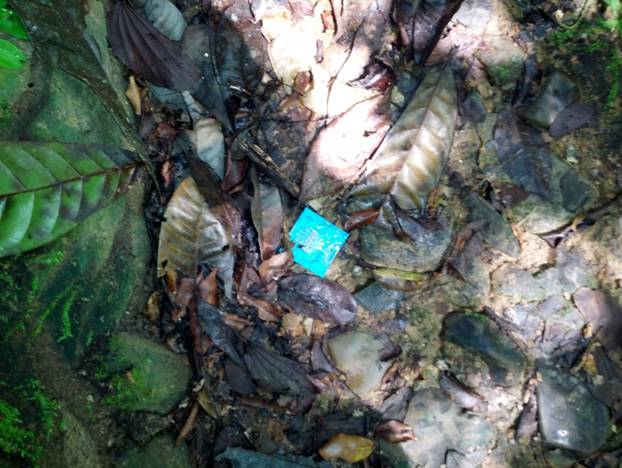 After fighting through the jungle for a while we turned back. Shortly, we heard cries of delight. We found a group of young high school age men having a dip in a pool under one of the waterfalls. Being hot and sweaty we soon joined them. The water was icy but wonderful.

My mate asked “Why do all Thais act like children when they’re in the water?”

I responded saying that every Songkran I acted the same, and gave a whoop!

As if by a pre-arranged signal, the boys all departed, to be followed half a minute later by the arrival of a group of girls. 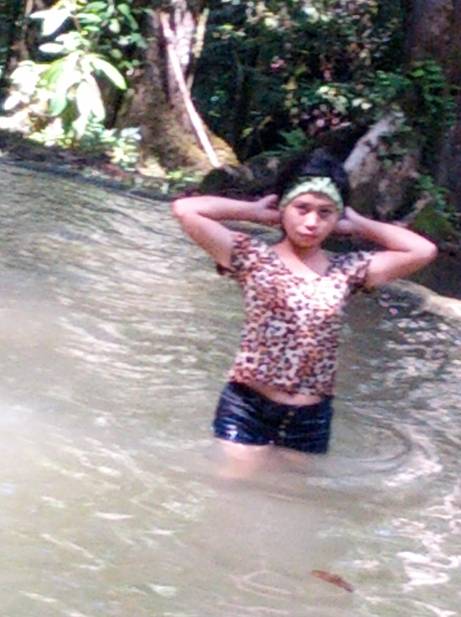 There’s not a lot of places to eat in Phang-nga that are tourist friendly so we found the KFC at Big C and went Thai. Afterwards we drove down to the docks where we rented a long tail boat. 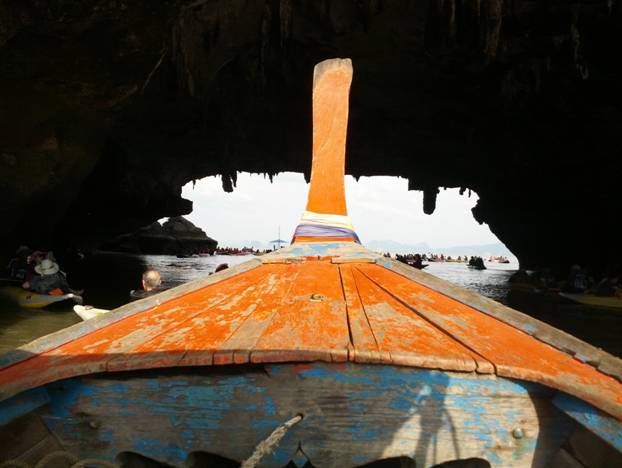 The Karst Mountain formation were as to be expected and the famous “James Bond Island” was overrun by Japanese. 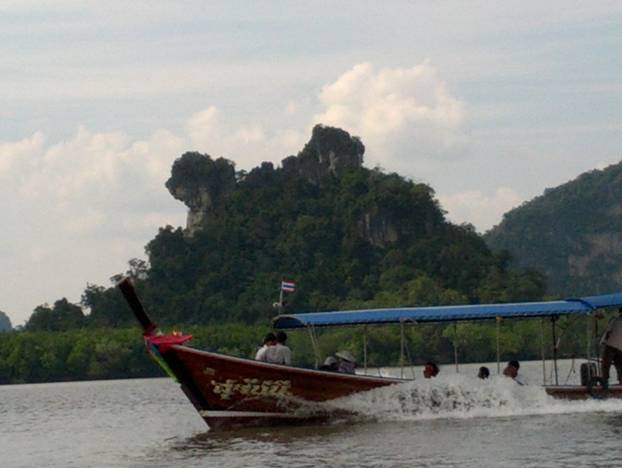 We were told that these were 4,000-year old cave paintings but one never knows. 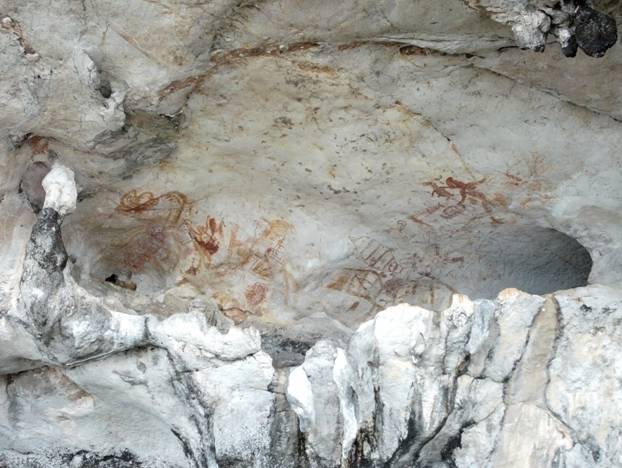 After that it was a quick hour drive back to my place where we flopped into the pool.

The pool, speaking of which, saw a bit of action the past week. My mate and I like to bring girls back and go swimming with them. And yes, they never have bathing suits so are forced to do without. At first, the girls are always quite shy, but with all the lights off (this is always late at night) they soon get over their shyness and become quite frolicsome. As pointed out earlier, there is something about Thais and water that brings out the child. At one point there were six of us (my two mates and I and three ladies) and we had a whale of a time.

If Bangkok girls are starting to cop attitudes and are too focused on their phones, and Pattaya girls are skanky, I must say that Phuket girls still seem to be all right. They may not be the best lookers (averaging about a 6 or 7, I would say) but still give a pretty decent GFE. Of the girls I brought back in the last week, two cooked dinner and the third did an amazing breakfast fry up. And of course, dishes were all washed and put away before I had finished digesting.

Rock Hard A Gogo has the best ladies, but they are the most aggressive. My mate bought a girl a drink and after 5 minutes she asked him if he was going to barfine her. He wasn’t sure yet was the response, at which point she up and left.

But I found that the afternoon girls are best. Rock Hard has a day shift from 2:00 – 8:30 and the girls are more friendly. It’s fun to shoot pool in the afternoon with no pressure. The girls come down off the stage and shoot a round before changing to the next girl when they have to dance. If you want to take a girl they are quite happy about it and seem genuinely pleased to give good service.

The other place to go is the new Tiger. Old Tiger burned down a few months ago (killing I believe 4) but the new place across the street had just been finished so all the bars that had been burned out simply moved over. A suspicious person might ask some questions about the convenience of that incident but I prefer to let things slide.

I may not write again before New Year and if not I wish you all a pleasant holiday season.

Nice trip report. If there is one thing I can say about Phuket it is that not a lot changes. When I first visited in 1997, Rock Hard was the best bar and now 15 years on, it still is. Amazing in this industry!

Thailand with a Purpose?