Tales of Waterfalls and Leeches: Kao Yai in the Wet – Part 1 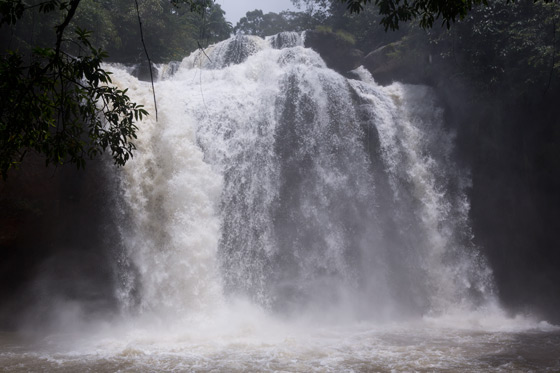 Procrastination is the stumbling block of an indecisive mind. Ideas not followed through on, plans postponed, or not completed, and opportunities missed due to poor option taking – or lack of option taking – are situations that most of
us encounter in our lives at some point or another; even more so if one happens to be residing in Thailand and an attractive local female becomes part of the equation.

I’d been considering a trip up to Kao Yai in the wet season for quite a while. I’ve always maintained that if one is to go and have a look at some waterfalls then the only time to do it is when the rivers are in full flow;
at the peak of the rainy season. After all, isn’t that when the unbridled, raw power of nature is at its best? The sedate spills, trickling over the rock ledges during the dry season, seem rather lame in comparison. I was in Bangkok
in September and the rain was bucketing down on a daily basis. I knew the rivers would be at their peaks and that any cascading falls in the mountainous regions to the North would be in full flow. I had no reason not to pack my bags, grab
my camera and head to the hills. Except, except, I’d gotten a little side tracked with a large breasted, hot little number from Khon Kaen and without really thinking about it too much, the lust factor had taken over after she suggested
a short visit to her home turf. In a rush of blood the trip to Kao Yai was shelved in favour of an amorous 3-day liaison in Isaan. Two days before I was due to board the Thai Airways flight up to Khon Kaen the sensible words of the owner of
this site set me straight.

“You’ll just end up being resentful of her after you’ve done the dirty a couple of times. You know that, don’t you?” said Stick trying to knock a bit of sense into me.

“True, and I’ll end up being bored shitless for the remainder of the stay there,” I said valuing his sober take on the situation.
Luckily I’d been sensible enough to pay a bit extra and purchase a refundable
ticket with Thai Airways; I’d get my fare back almost in full. Less than 24 hours before I was supposed to be flying off to Khon Kaen, I SMSd the hot little number the bad news; it was a face-saving white lie telling her that I couldn’t
make it as I’d been recalled to work early. There was a short message back expressing her disappointment and, save for that, I’ve heard nothing from her since. This reinforced my cynical, but apt, assessment of the situation;
I just represented an opportunity for her. No doubt it wouldn’t take a gal of her talents too long to find other opportunities.

With the weekend and the rugby out of the way, Monday morning dawned overcast and wet as I grabbed my kit and headed down to Golden Car Rentals at Victory Monument. Another mate, and long term expat resident of the City of Angels, had
given me the heads up on the their inexpensive car rental rates. A small, 4-door saloon will only set you back 1,200 baht per day and the rate includes full insurance. Their yard and office has no English language signage visible but they’re
located on Din Daeng Road directly opposite the New Century Park Hotel. After presenting my passport; my freshly minted Thai driver's license, and the rental fee, the obligatory paperwork was filled in and I was on my way up the Don Meuang
Tollway by 10:00 AM.

To ensure a relatively smooth run up to Kao Yai I’d printed out a whole bunch of Google maps but the fact is I needn’t have; the directional signage all the way to my eventual destination was more than adequate in ensuring
one doesn’t lose their way. I’d pre-booked accommodation, for two nights, at the Kirimaya Spa and Golf resort. The rates were a tad expensive
for this time of year, but the standard of the facilities was top notch and well worth the advertised daily rates. After a relatively sedate 3-hour drive I was pulling into the parking area in front of the hotel lobby.

An hour later I was back on the road and heading for the entrance to Kao Yai National Park. The park has one road in and out and spans mountainous, jungle-clad terrain nestled between Pak Chong and Prachinburi. I was entering through
the gate on the Pak Chong side. The checkpoint has a fee booth and as I pulled up alongside the entrance rates were clearly advertised; vehicles 50 baht, Thai nationals 40 baht and foreigners 400 baht. Yep, that’s right, the Thai rate
is one tenth of the entry fee for foreigners. I thought that was a bit on the nose but after handing over my newly acquired Thai driving license for inspection, received a rather pleasing response.

I handed over the fee, got my tickets and as I motored into the park I couldn’t help thinking that the 3-hour ordeal I’d gone through a week earlier at the Drivers Licensing Registry, to renew my Thai license, had in the
end been well worth it. I’d also been given a coloured booklet with information about the attractions in the park. Most of it was in Thai but a small section, towards the rear, was in English. I pulled over on a wayside and took a few
minutes to read through it. As I realistically only had enough time to visit one site in the remainder of the day available, I wanted to make sure it was going to be worth the drive to get there. Soon enough I had my intended target; Haew
Narok waterfall. At just on 53 clicks from the entrance gate, it was listed as one of the biggest waterfalls in the park. The fact was it was actually closer to the Prachinburi side entrance gate than the Pak Chong side. Not to be deterred
I put the car into gear and settled in for the one-hour drive through the winding, jungle-clad mountainous road. 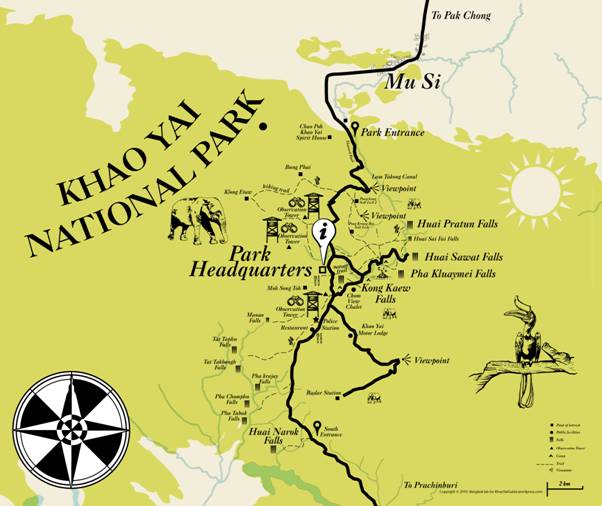 The twisting road winds up to an elevated plateau and 17 kilometers from the park entrance stands an HQ complex which includes lodge style accommodation, restaurants and a visitors center. With the limited amount of daylight available
to me I pushed on to Haew Narok; I’d stop by the HQ complex the following day. Just on an hour after paying my entry fee I was pulling into the carpark of Haew Narok waterfall. The site is well set up for visitors and includes a restaurant,
toilet facilities, and an information kiosk. There is no fee required to go down to the waterfall and the direction is clearly marked by signage. I grabbed my ruck sack and camera and walked over to the park ranger sitting at the information
kiosk. There was a sign saying something about all visitors to be back in the carpark by 5 PM due to the presence of wild animals in the area between 5 – 6 PM. I glanced at my watch and noted that it was just on 3:30 PM; I still had
an hour and a half to get down to the waterfall and back. The park staff at the kiosk pointed towards the start of the trail.

“
Mai glai, neung kilo,” she said with a relaxed smile. 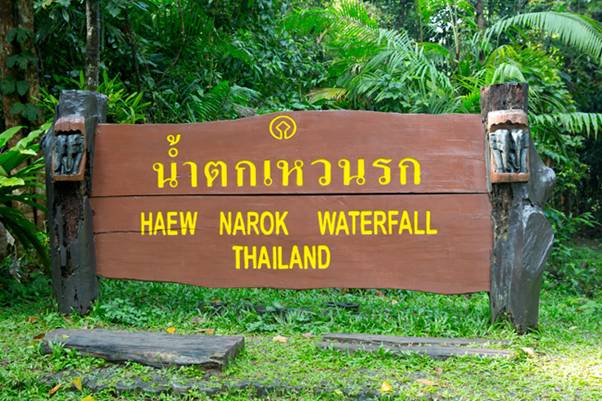 53 kilometers in from the entry gate on the Pak Chong side of Khao Yai. 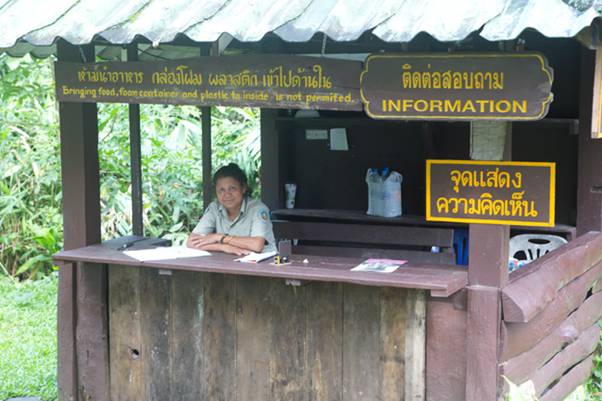 The friendly park ranger at the information kiosk at Haew Narok waterfall.


As I began working my way down the trail it became quite apparent the site was very well set up for visitors. Sometimes the trails at some of the national park sites in Thailand are barely visible but at Haew Narok this was not the case.
The infrastructure was highly impressive. With a one-meter wide concrete footpath to follow, and properly constructed bridges over the streams and rivers, the going was very easy for visitors. At what I estimated was approximately the mid-point
of the trail down to the waterfall was a properly constructed foot bridge spanning the wide expanse of a swollen, muddy river. I stopped in the middle and banged off a couple of shots. The heavy monsoonal rains had the brown-tinged river in
full flow and no doubt the waterfall was probably going to be quite a spectacular sight. At the 400-meter marker peg I caught the first sounds of a rumble in the distance. At the 200-hundred meter marker peg that distant rumble had developed
into a full-blown roar. 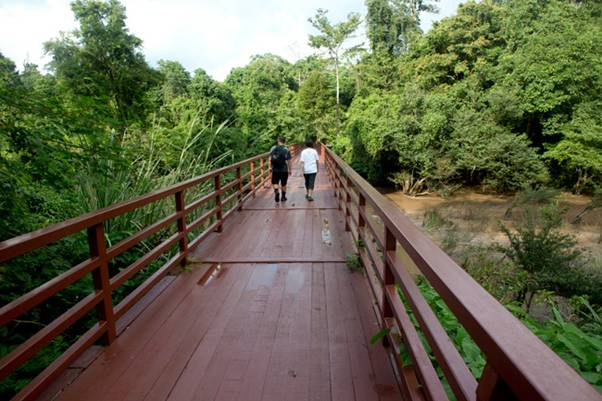 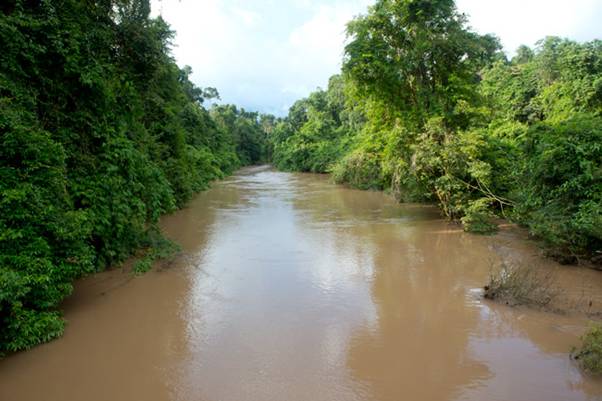 The muddy brown river; swollen from the recent heavy rains


The final stretch of the track is a steep climb down a well-constructed stairway. The 210 steps down to the viewing platform zig zag down the near vertical hillside with safety rails and landings in place to make the descent a relatively
safe exercise. At the top of the stairway there was no mistaking the over powering roar of the waterfall below. Sometimes we travel to places to see and experience things which, quite often, underwhelm our expectations. As I got ever closer
to the maelstrom of water pouring over the rock ledge I could see that my expectations were about to be well exceeded. By the time I reached the bottom of the stairway the volume of water coming over the falls was quite an incredible sight;
it was nature in its raw, full fury. The constant spray, and draft, coming off the massive flow as it plunged into the pool below was creating a misty rain which hung in the air and dripped off the trees above; getting some in focus shots
was not going to be an easy assignment. 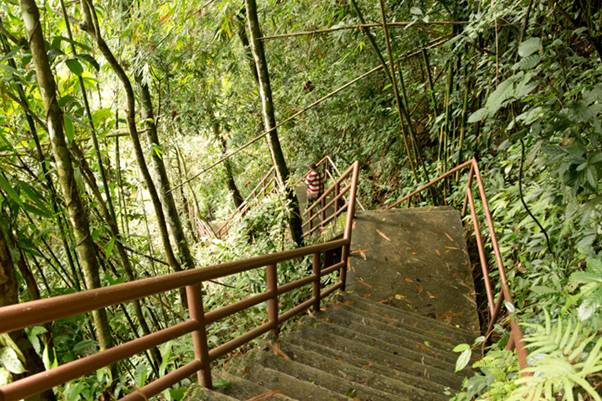 The final stretch down to the viewing platform; 210 near vertical steps.


Luckily I had a hand towel with me so I was able to cover the camera and keep it dry while I selected the settings I wanted for each shot. I’d then whip the towel away and, with the fine mist settling on the lens filter almost
immediately, I bang off a shot as fast as I could before getting the camera back under the towel again. A Thai photographer, also there, noted my ingenuity and set about doing the same thing with his shirt. After getting about 20 shots I decided
the camera had probably seen enough moisture for the afternoon. I packed it into my rucksack and then just hung out on the upper viewing platform enjoying the spectacular sight before me as millions of liters of water poured over the ledge.

With clothing fully soaked and, hopefully, some good shots bagged I made my way back up the stairway. A few minutes before 5 PM I was back out in the carpark and breathed a sigh of relief that I’d avoided the wild animals. I glanced
at the sign and, with a bit of a cynical snigger, wondered how the animals would know the difference between 4:55 and 5 PM? 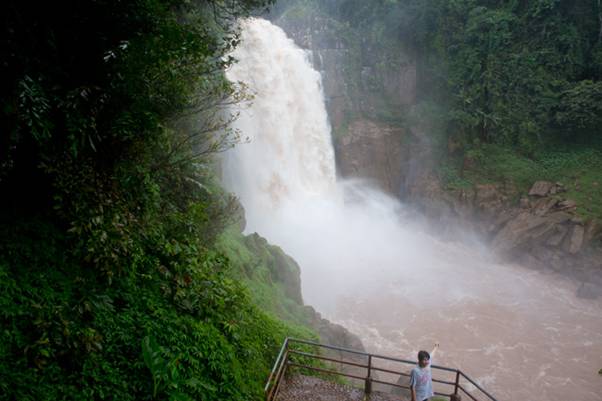 The amazing power of nature in its full fury 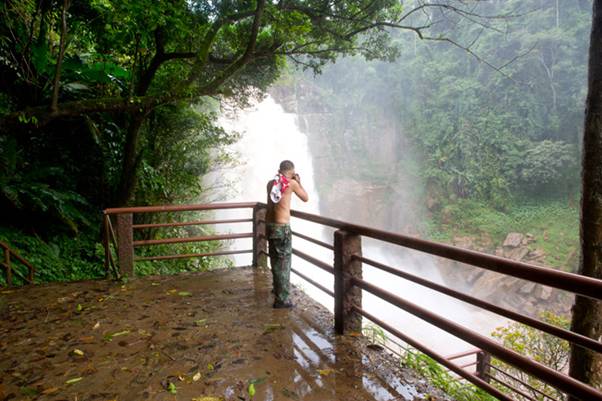 A fellow photographer helping to create a size perspective 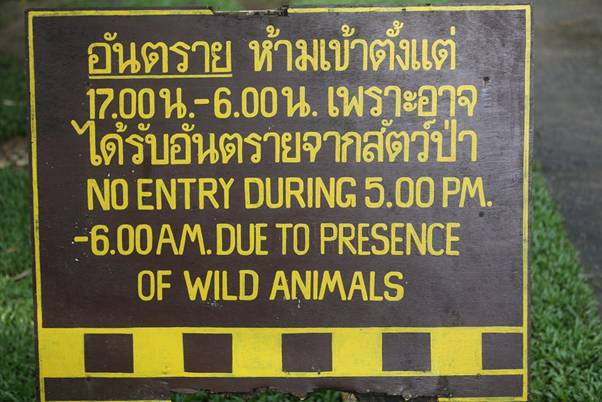 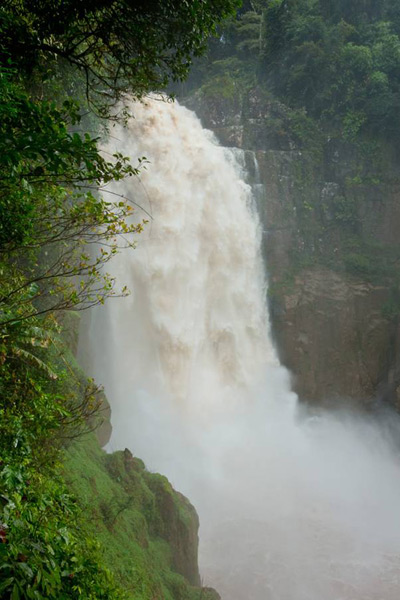 I wonder if the animals know the difference between 4:55 and 5 PM? 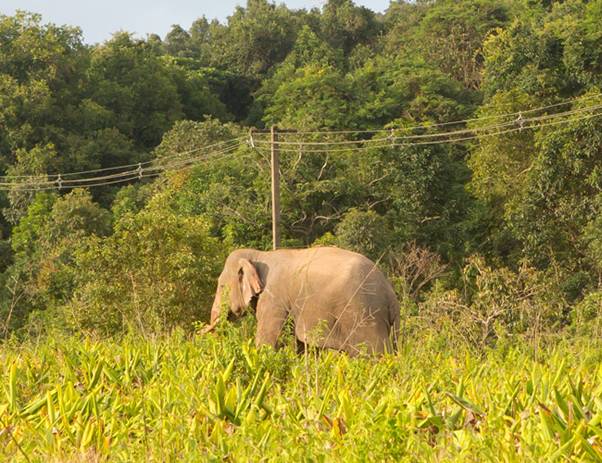 The drive back to the exit was gate was largely uneventful save for an elephant feeding on the side of the road in the late afternoon. My clothes were soaked through but I felt satisfied with the start of my little excursion in Khao Yai
National Park and was very much looking forward to the next day’s adventures.

Wonderful – and so much better than flying up to see that hussy in Khon Kaen!

A Tale of Two Cities