Tales from the Hill Village Part 1

Well I have now emigrated from Farangland to LOS barring any visa problems. The news is all small village gossip so anyone expecting anything salacious please move on to the next submission.

My first port of call on day 1 was to the bank to deposit the required amount of money into a Thai bank account in my name so as to be able to apply for a visa extension.

Before my sister in law left to seek her fortune in Pattaya she borrowed money from everyone who would lend her money. The only satisfaction I can get is that loads of other people were ripped off by her as well as me to the tune of 150,000
baht. Apparently one friend of the family who had always liked my sister in law as he had no children of his own, put up his car as collateral for a loan for her of 70,000 baht. She hasn't paid any of it back. This guy is a close friend
of my father in law so not sure whether he is expected to pay it back or will it be down to me as the family farang! We haven't had anyone coming around to our house yet but I am half expecting it. I am hoping that someone puts a contract
out for her. Good riddance I say. The beneficial side of the whole affair is that I haven't had to try and rid myself of the sister in law when I returned to live in my own house. I am still trying to get rid of the sister in law's
other half. My wife has told her we don't need her anymore, but she likes it up here in the hills where it is so much cooler than the plains, so she is moving out by the end of this month and going to stay with friends relatives. However
I haven’t got rid of her totally as the wife is still planning to go into some agricultural venture with her on our land (I mean her land paid with my money!). At least I haven't got to employ her anymore and I have another room
for my children to sleep in.

My brother in law's new wife hails from Isaan, as black as the ace of spades from long hours working in the sun but the wife described her as fat. I think slightly plump but quite attractive and quite small. The brother in law made
a good choice I reckon. She seems nice enough but hasn't exchanged one word with me so far. I did get a smile though. As revealed in an earlier submission they were at it many times a day and she was getting very sore but no news on that
now, presumably down to a more reasonable level. In a week I still haven't met this brother in law, he is very busy on the farm. I always think of him as Tarzan as he has a muscular body and I have seen him climbing up trees to get coconuts
down. He would make the perfect actor as he could do all his own stunts.

Another brother in law is in trouble as he has fallen out not only with his father and family but also with his sponsor. He has crops waiting in the fields to be picked but the sponsor won't let him sell the produce. He has told
all the buyers of the agricultural produce not to buy from this man. My wife explains to me that her brother in law cannot just sell the produce because the sponsor can call the police and the buyer and the brother in law could both be charged
with stealing. Apparently this brother in law speaks badly about everyone and upsets everybody. His wife has to work in the fields for 200 baht a day so that the family of 3 can live. Apparently he sold his car for 95,000 baht and then proceeded
to gamble all the money away. Crazy man.

The other brother in law has already “borrowed” 200 baht from me to help pay for his toilet to be unblocked apparently the underground cesspit has reached full capacity. He has enough money to buy a bottle of whiskey a day
from the wife's shop though. Nice guy and family but I am always helping them out.

We have tried to get a satellite internet connection but TOT has still to come out to inspect our house's suitability. Meanwhile I have got internet access by the AIS mobile phone network, not very fast but good enough for news,
e-mail and banking. It has cost 400 baht so far not sure how long it is going to last before I have to top up.

The crazy brother in law came around. First time I met him this week, he cut the grass on our land on the land behind our house where we are going to grow vegetables and was then talking to the wife. As he has no one to turn to be his
sponsor for next year I have agreed to sponsor him. This means I pay for the seed, fertiliser and labour costs and when the crop is sold I get my money back plus 50% of the profits. It seems to work very well for the sponsors as they are the
rich guys. The only down side to this is the other brothers will probably also want me to be their sponsors.

A friend of the mother in law's came round this afternoon with a rather handsome young boy in tow – with a western nose. It turns out she is looking after this boy for her daughter who is working in Pattaya. The boy is the product
of a previous relationship the daughter had with an Austrian who is not supporting the child. He is nearly 3 years old and may well become very friendly with my son. To the Austrian guy, I hope you get your just desserts.

The sister in law's other half has been ill the last few days and my wife says they think it's malaria. Not sure whether this is a ploy to allow her to stay on in our house but the thought has crossed my mind. My wife can be
devious so will find out soon enough.

I took out a subscription for TV with True Vision for 2,330 baht per month and I have to pay an extra 100 baht per month to get CBeebies for my children. The disappointment is that the programmes are old, dating back to 2010, 2005 and
even 2002. Anyway it keeps the children's English up to scratch.

To get rid of my sister in law's other half it cost me a nearly new motorbike. However she is now gone. Before I could get my son installed in the bedroom, mother in law has now taken up residence. Apparently she likes my house better
than her own! How am I going to get rid of her? Another motorbike maybe! However one good thing happened, the sister in law's friend told the mother in law to shut up when she was complaining about the cost of the motorbike and told her
it isn't your money and now my wife isn't going to go into business with the sister in law's friend anymore. I think it also made my wife realise she is being used.

Well, I have gone into business with the father in law! He owns loads of land but no money. I have loads of money but no land. We are going to grow corm but he needs a tractor. So I have bought a tractor, 742,000 baht worth. The deal
– I get 60% of the profits he gets 40%. When the tractor and all the other outgoings namely diesel, seed, fertiliser etc are paid off we get 50% each. It has been great fun driving the tractor around on the wife’s land. The son wants
to go out on the tractor every day. Obviously to comply with the law I won't be able to do any of the driving for real but when you can employ people for 200 baht a day why should I.

Another business opportunity has presented itself. I am not entirely comfortable with it but someone has to do it. My new nickname Shylock. A lady wants to borrow 60,000 baht for a week at 2% interest. Apparently you can't roll over
a loan so they have to repay the loan and then about a week later they can take out a further loan. She comes to me so I have lent it to her. My security are the papers for some of her land. Two days later another person wanted to borrow 100,000.
Apparently the car finance company suddenly wants a large payment near the end of the contract. If they don't pay then they lose their car so another loan is in order. Negotiations continue on this one as they can't find the papers
for their land. However the thought of stopping a finance co foreclose and make loads of extra money is very appealing but I do want some security. The same day another lady wants to borrow 60,000 baht. I already have the papers for this and
am off today to the bank to get more money.

A friend of my wife is ill and unable to do much work. They have 3 cows and they live off the milk these cows generate – about 60 baht a day. Their son lives with the parents as they haven't enough money to look after him.
Anyway they have about 20 rai of land and proposed we buy more cattle and they feed and look after them and we split the profits when the cattle come to be sold. So we went to see the cattle and then also looked at some water buffalo.
They are magnificent creatures. Anyway we have bought 7 buffalo, 1 immature male and 3 cows with their offspring (2 girls and a boy), so next year will hopefully have 5 calves (are buffalo capable of breeding at 1 year old?) and the Deluded
buffalo collection should double very quickly. What made me very happy was that the day the buffalo were collected they brought back their son from parents to live with them. 1 family reunited. So Deluded is also a philanthropist as well.
Also it makes it easy when buffalo are sold we get 50% of the sale price (apart from the original 7 which will always belong to us). So if any Stickman readers are feeling generous and want to contribute to my sick buffalo fund (I am saving
up for the vet’s bills) or the poor boy reunited with his parents, all contributions will be gratefully accepted. 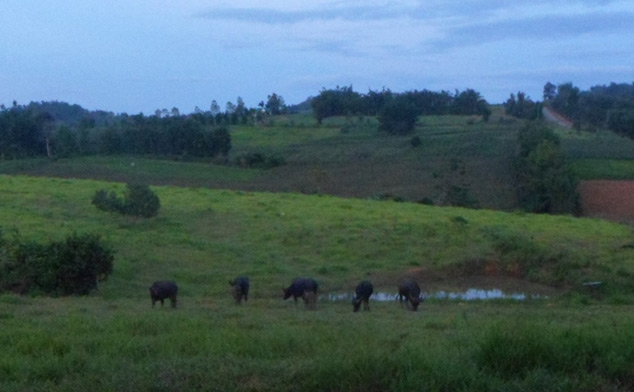 Rumour in the village, so one of my wife's customers told her, is that I am worth 50 million baht. I say I wish I wish. Everyone is coming round wanting to sell land, business opportunities or loans etc. My wife says she was never
this popular before she married me and no one wanted to know her then. Money buys status in Thailand (or rather in Thai villages).

To the you might be a buffalo submission, I scored 13/28 so I think I must qualify.

Here's a picture of my buffalo on 20 rai of land.

To any readers shaking their head in bemusement and wondering whether this is how things really are, YES, this is a very accurate portrayal of life in a village in Isaan!

Tales of Waterfalls and Leeches: Kao Yai in the Wet – Part 1