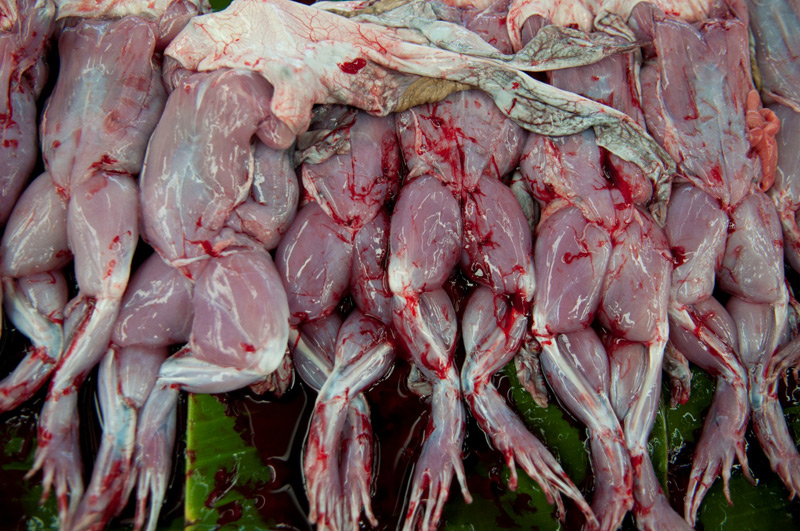 I first noticed Klong Toei Markets about three years ago. I was out on one of my nightly forays to Spasso’s and the demimondaine I'd picked up directed the taxi driver to head back to my apartment, in On Nut, via Rama 4. Even
at 3 AM there was a bustle of activity around what looked, for all intents and purposes, like some kind of slum or shanty town. I was intrigued and asked my girlfriend for the night what it was.

A year or so later I moved down to Thong Lor and figured out that getting to Klong Toei market would be a relatively simple exercise using a combination of the BTS and MRT. For the first couple of visits I was a bit lost amongst the cramped
little vendors laneways but eventually worked out where everything was. The in your face lack of hygiene was compensated by the low cost of the fruit, veg, eggs and fish on sale. It made me realize how overpriced things were, even for local produce,
at the supermarkets. During one of my regular lunch meetups with Stick I mentioned the idea of heading to Klong Toei for an afternoon outing and a photo opportunity. He saw merit in the idea and the following day we met at the Sukhumvit MRT, cameras
in hand, and boarded the underground bound for the Queen Sirikit Convention Center. A few minutes later we were off the train and heading up the escalator of exit number one. The market sits on the intersection of Rama 4 and Rama 3 roads.

The traffic at most times of the day blasts down Rama 4 so the city planners have been intelligent enough to put an overhead walkway across the whole intersection; thus enabling the hordes of shoppers avoid being mowed down as they try crossing
the road. The walk from the underground exit, to the pedestrian overpass, is a couple of hundred meters and as you ascend up the stairs you get a nice panoramic view out across the acreage of the market. As an added bonus, especially if the wind
is in the right direction, you’ll pick up the distinct aroma of the place well before you enter.

Being a bit of an old hand at the market I led the way as we entered at the very corner of the road junction and made our way into what I would call Isarn Lane. Isarn Lane borders the outer side of the klong and is a mass of vendors stalls
selling produce, alive and dead, that swims, crawls and hops. The distinct smell of pla raa permeates the enclosed environment from the large vats scattered along the way. Live eels, turtles, water beetles and skinned frogs abound and,
oh look, those mesh bags are moving. No problems, it’s the live frogs waiting to meet their fate. A kindly vendor gives them another spray of water and the frogs settle down into their uncomfortable, silent vigil again. The vendor looks
at us with a wide smile. “Aroy mak maak,” she says enthusiastically. Stick’s not that impressed and we continue on to an area that can only be described as foul. Yep, it’s chicken and duck alley. I comment
to Stick, as we work our way in amongst the packed cages of feathered livestock, that the RSPCA would have heart failure if they ventured in here. 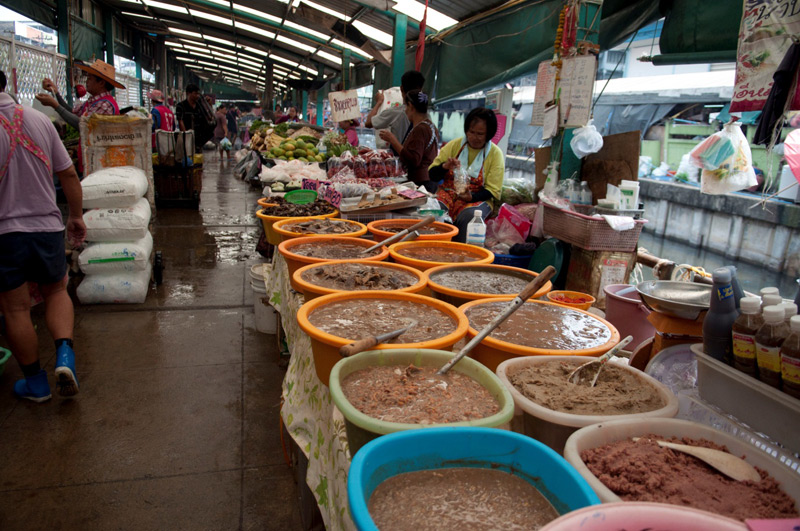 Anyone for a spot of fermented fish? 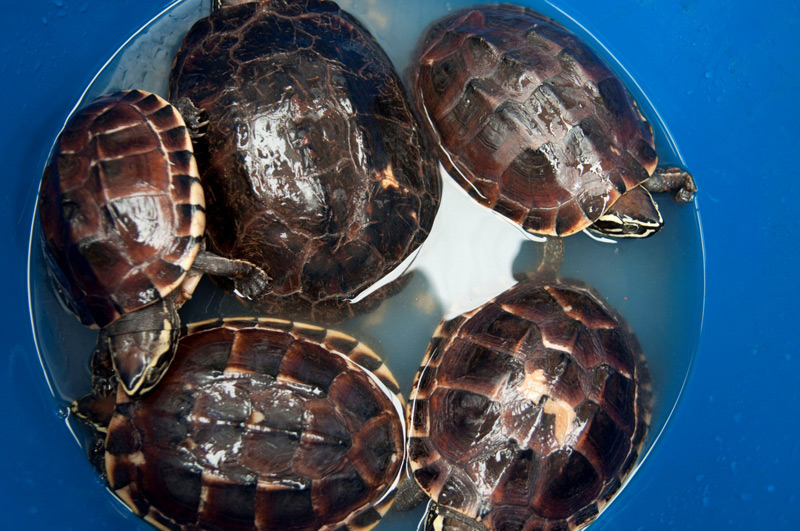 Turtle soup on the menu? 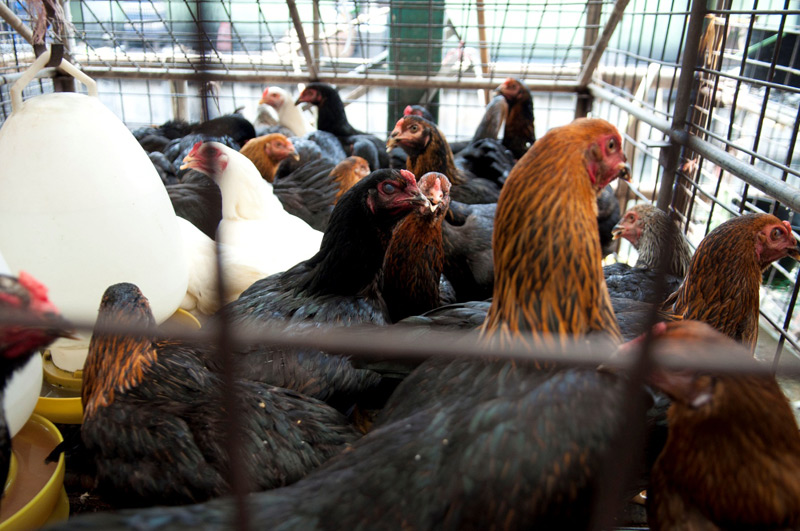 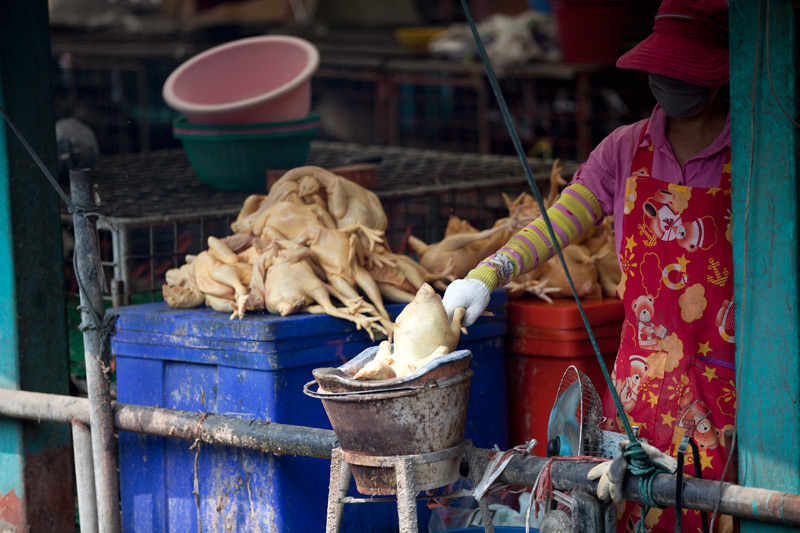 The end product (photo by Stickman)


The cages, either side of the laneway, are jam packed with clucking, squawking birds. Up ahead another vendor has a pile of freshly skinned carcasses that she’s charring on one of those clay pot barbecues. The half roasted bodies are
then lined up along a bench and ready for sale. 80 Baht a pop; salmonella included. We turn right, move past more cages of flapping fouls and then cross the narrow bridge over the Klong. The colour of it indicates that a body would probably dissolve
if it fell in. We stop to bang off a couple of shots and move towards the inner market area. Just when we thought the smell couldn’t be any worse; it is. We’ve arrived at the seafood section and, just off to one side, is the crème
de la crème of stinkiness; it’s somtam corner. The fish, for the most part are semi alive and living out their last gasps in the stainless trays before they get the chop. Those that didn’t see out the day are in pieces on a
table a couple of meters further on. To be honest I’ve bought fish here on a number of occasions and it’s always been good. The price? Just 120 Baht for two fish. The vendor will gut and scale them on the spot for you. After a few
minutes spent checking out the fish market, and getting photos, it was time to have a closer inspection of somtam corner; the epicenter of smell along this lane. There were buckets piled high with those small, freshwater crabs and, as we got the
cameras to work, a couple of ladies were busy ladling out generous amounts of pla raa from a line up of large enamel basins; perhaps pla raa comes in different grades of fermentation? As we stood there getting more shots, and gagging on the smell,
the only thing running through my mind was that the average Thai must have a cast iron stomach to be able to ingest this muck. 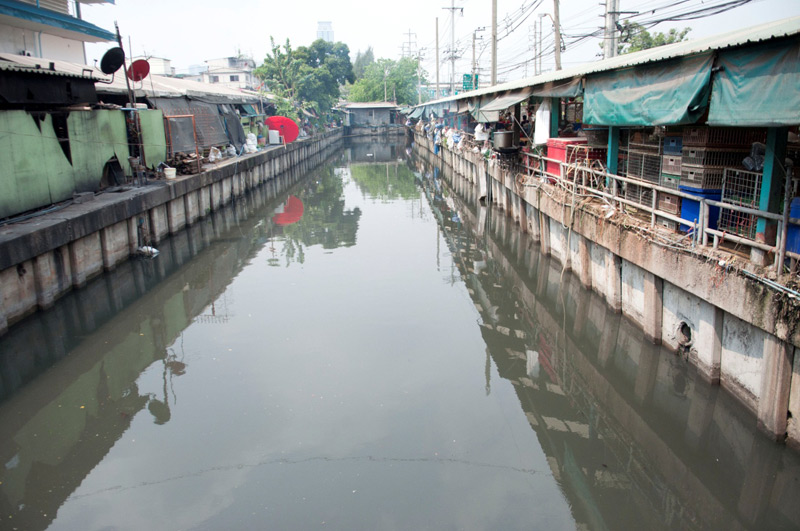 If you fell in you’d dissolve 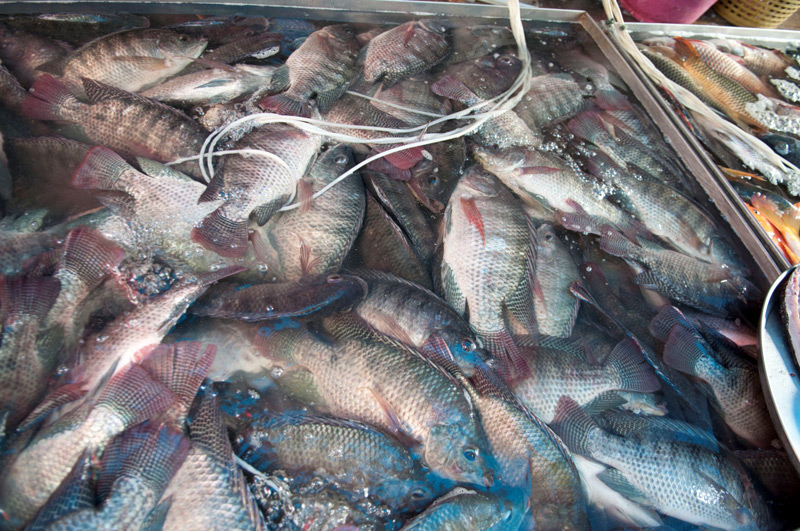 Waiting for the chop 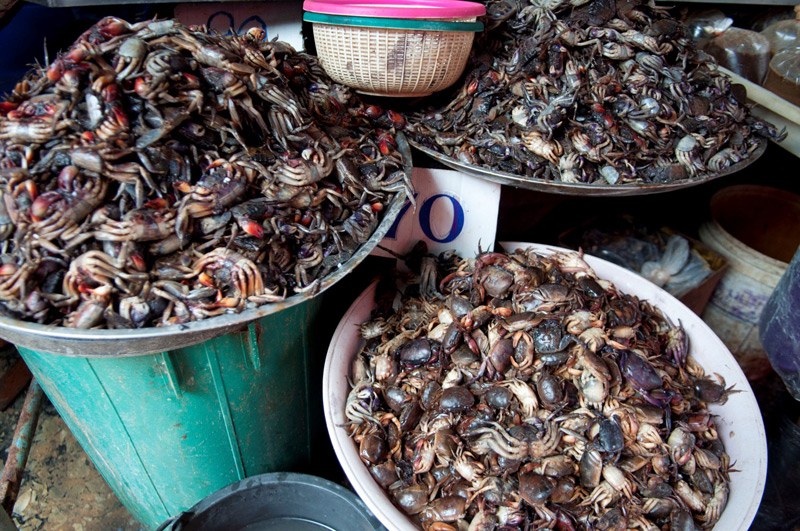 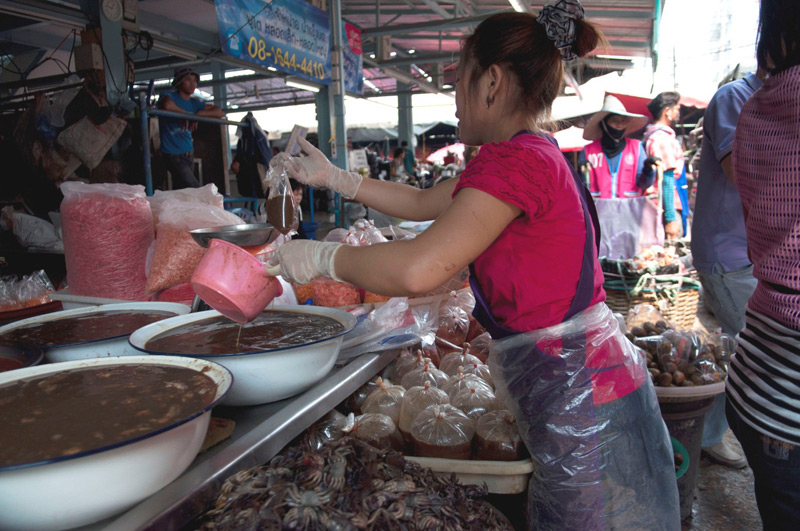 Ladling out the Pla Raa 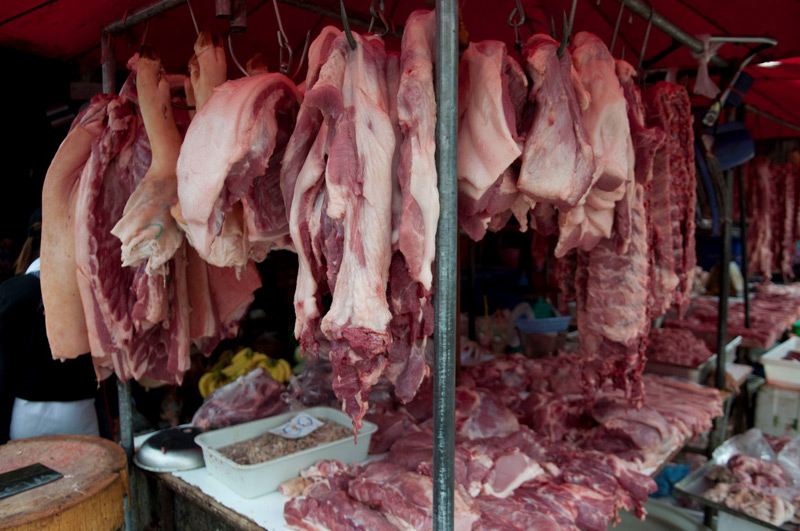 Lumps of raw pork hanging in the midday heat


The heat, of the early afternoon, combined the smell was becoming a bit too much so we decided to make a bee line for a part of the market where there was less smell; the fruit and vegetable area. On the corner of the fruit and vege lane
there was a stall displaying lumps raw pork. With the number of flies buzzing about in the heat we both agreed that pork was certainly not on the shopping list. After getting a couple of shots we continued up a wide lane lined with an abundance
of fresh garden produce. A cursory check of some of the prices revealed that it was all very cheap; cabbages going for eight baht each, a kilo of very nice carrots for twenty baht and potatoes at 25 baht / kg. When I’m in town I usually
get down to Klong Toei at least once a week for my fruit, veg, eggs and fish. Good size eggs are about 36 baht for ten. When compared with prices in the supermarkets, it’s a no brainer; Klong Toei market is far cheaper. The only drawback
being the apparent lack of hygiene but if you stick to non meat (including foul) produce then you’ve really not much to worry about. For those interested I’d recommend wearing a stout pair of shoes, particularly in the rainy season,
as there’s dirt and muck covering the walkways. The following is a few shots of the produce, and prices, on offer. 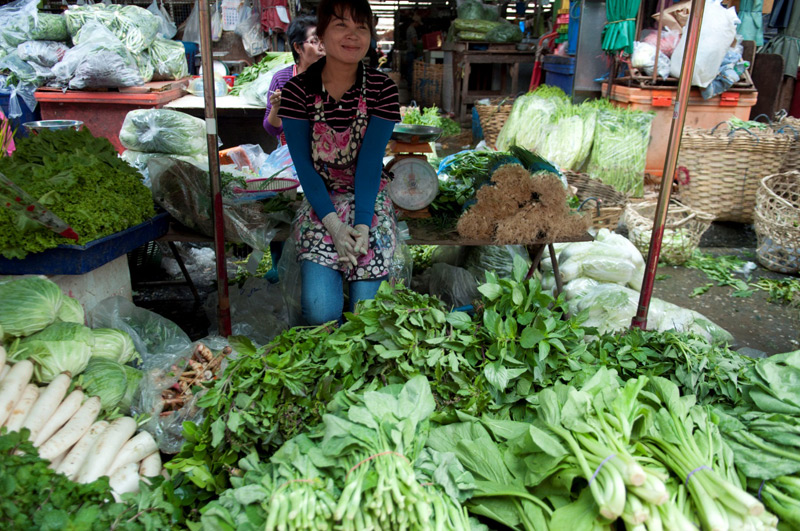 Fresh green veg to go with a friendly smile 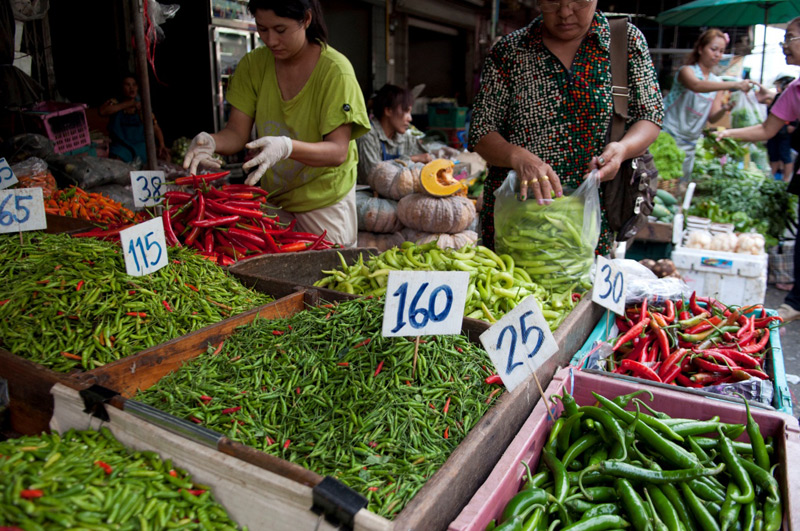 Variety is the spice of life 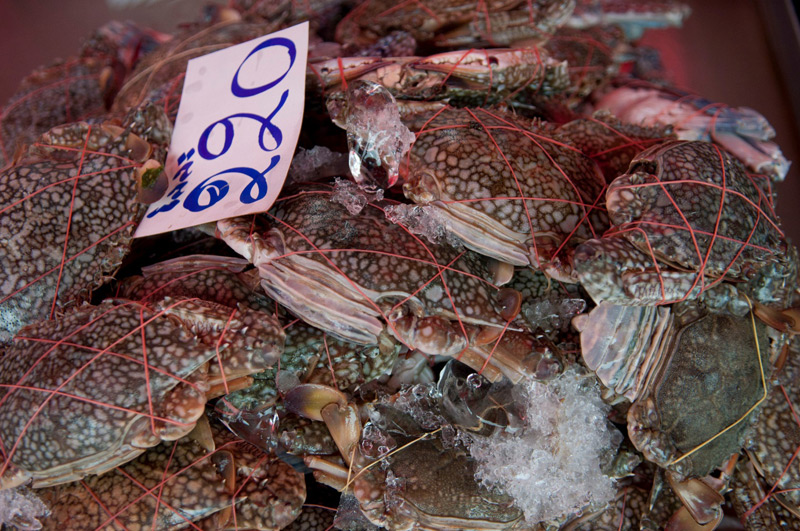 220 Baht a kilo; worth considering next time you order a crab at a restaurant 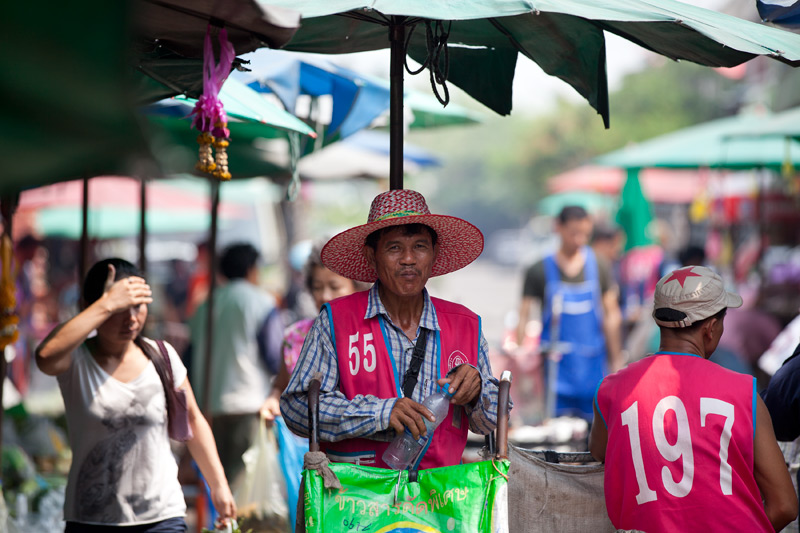 The barrow boys of Klong Toei Market (Photo by Stickman) 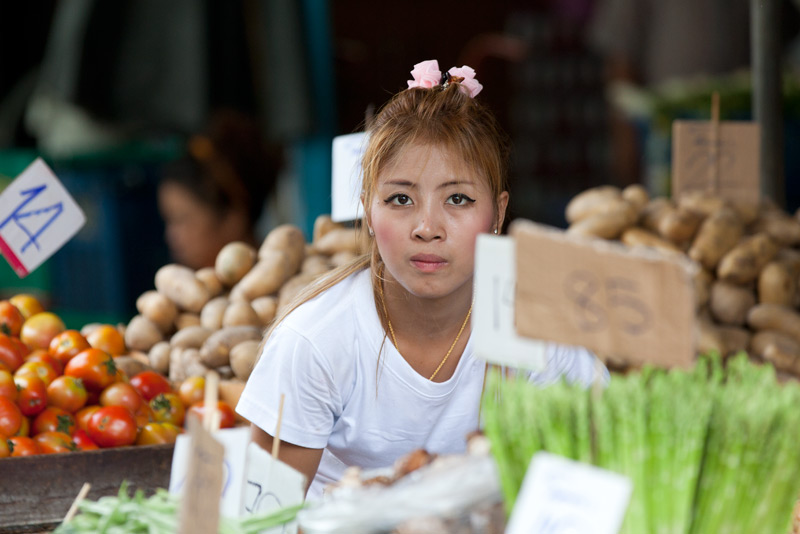 
The small sois and laneways of the market are a hive of activity with buyers and sellers jostling in the cramped conditions to conduct their sales or make a purchase. We were continually having to move about to avoid the constant stream of
porters (barrow boys) pushing trolleys full of goods up and down the laneways. At first glance I thought they were motorbike taxi drivers because they all had coloured vests with numbers on them. It made me realise that there must be a semblance
of organisation about the place; the numbered barrow boys probably needed a license to operate.

A couple of hours into our exploration the mid afternoon heat was beginning to take it’s toll on me. Stick was still happily snapping off shots of some the lovelies working at the vendors stalls while I was looking for some shade and
a cold drink. After another 20 minutes aimlessly wandering around the laneways further inside we decided we’d seen enough and made a bee line for the nearest exit. A latte in the air-conditioned comfort of Terminal 21 was beckoning. All
in all it was an interesting afternoon and well worth the trip down there for something completely different in Bangkok. If you’ve got a sensitive nose then it’s better not to get off the beaten track. Thanks, Stick.

Our photo expeditions are always a lot of fun and Klong Toey Market is a great spot for taking photos, although not the best spot for just hanging out. Unlike some of the places we venture, Klong Toey is not a place I want to return to time and time again. The smells can be a bit overpowering at times!