Nowadays almost everyone in Thailand has (at least) some kind of device to take pictures with. I even see a lot of people (Thai and foreigner) walking with a DSLR around their neck. However, since I like to observe people, I notice that just a small number of these people actually take pictures of the things that are happening around them (or take any pictures at all, and just like to have a camera hanging around their neck as some kind of fashion item).

For the people who do use their camera, there is this specific 'genre' of photography called 'street photography', also known as taking pictures of people (complete strangers) in situations that happen around you, while you walk the
streets (or wherever you are walking). 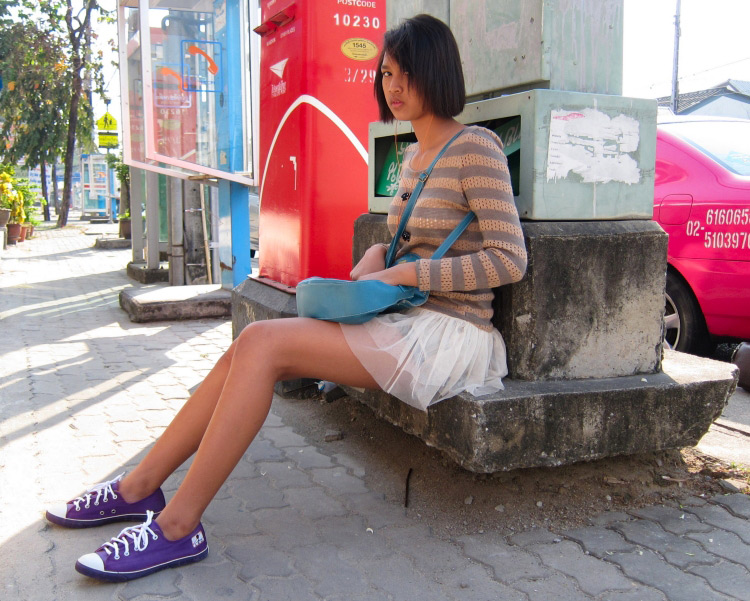 I always had a fascination of observing people around me, and last year I started to take pictures of the people I thought just had something interesting about them. This can be a certain facial expression, an activity they are doing, or just some funny
outfit they are wearing.

At first I was a bit reluctant to take photos of complete strangers and without even asking them. I was over analyzing the whole thing a bit too much, and things went through my head like 'what if they don't like it when I take their picture?'
or 'what if someone becomes aggressive when they see some stranger snapping their photo'.

Then one day, while waiting in a queue to get an ice cream at McDonald's, I saw this Japanese wearing some kind of silly hat. Since I always bring a small camera with me, I decided (in a few seconds) that I wanted to take her photo, and so I did.
I just stood a meter away from her and her facial expression when she saw I was taking her picture was priceless. It was probably the look someone would have when you asked them what kind of underwear they were wearing. 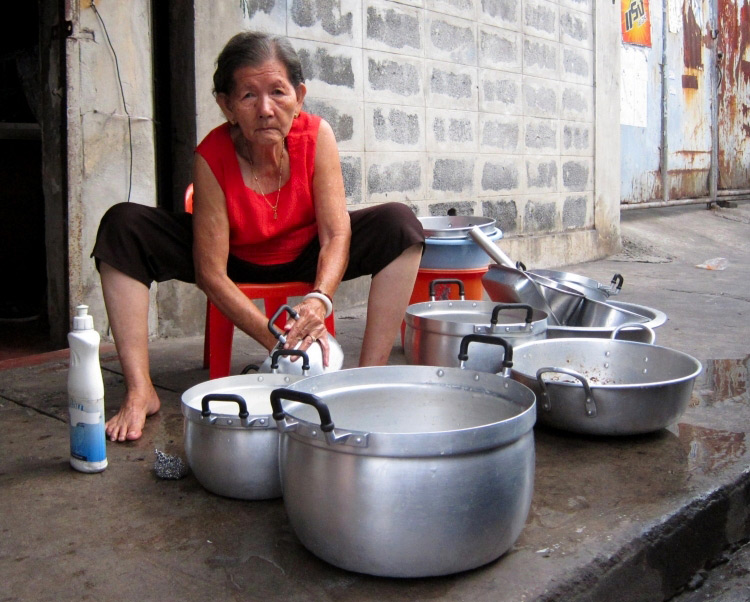 After the picture that I made of the Japanese girl, I started to take more photos of people and really got a feel for it. I also want it to be a nice photo, so composition is also important to me (does the background look okay? Are there any 'distracting' objects in the potential photo, etc etc). 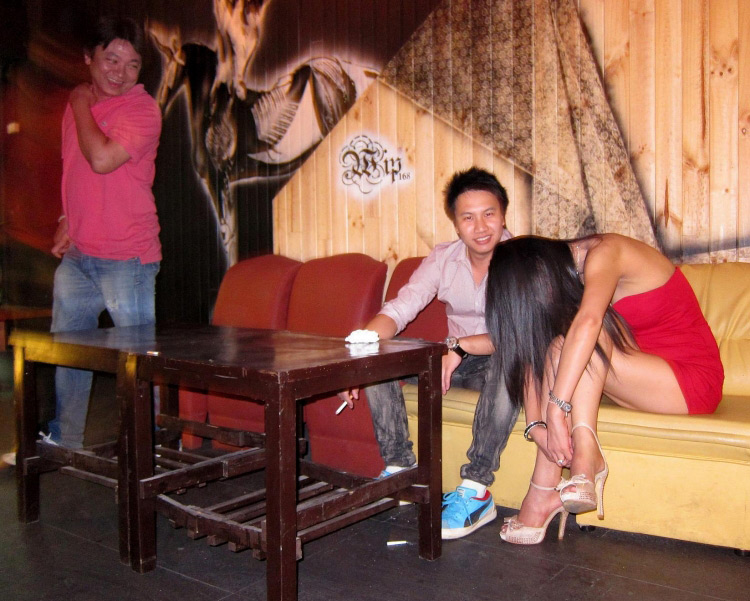 There will always be people who say (or nag) 'why don't you ask people permission before taking their picture?' For me the answer is very simple; in my experience, when you ask someone permission to take their photo, the picture wouldn't be spontaneous anymore, and as a result I would get some kind of pose with that retarded peace sign that Japanese teenagers make (where did that came from in the first place?), or worse, no photo at all. Besides that, if I would ask everyone permission before taking their photo, I would be dead tired after doing a day of photography. 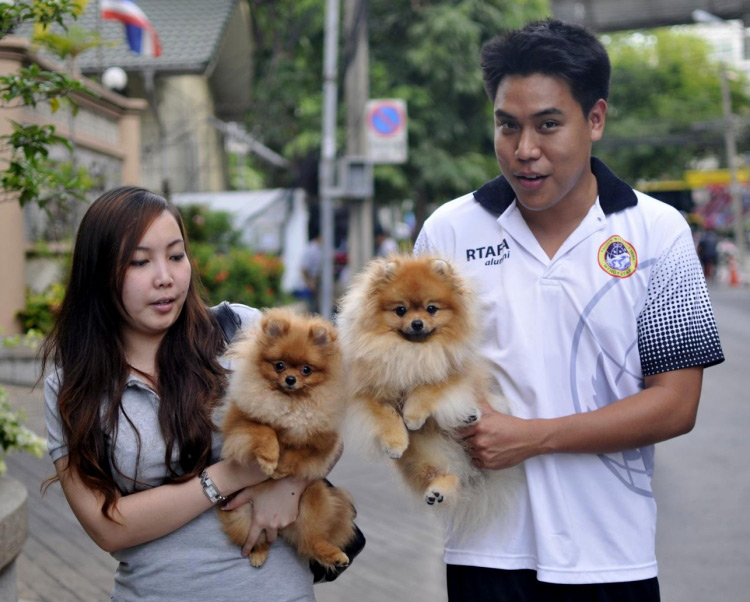 About one and a half year later, after taking thousands of photos of hundreds of different kinds of people who I never knew before (or after), I came to the conclusion that most people don't even realize I am taking their picture. If they do, they
usually smile and react in a friendly way. There were a few 'incidents' where people asked me if I took their picture, and when I confirmed this, they 'ordered' me to delete it. It's completely legal to take pictures
of people in public, but I don't like to piss of people, so if it's a problem for someone, I just press delete. Luckily, over the last year and a half, only about 5 people asked me to do so. 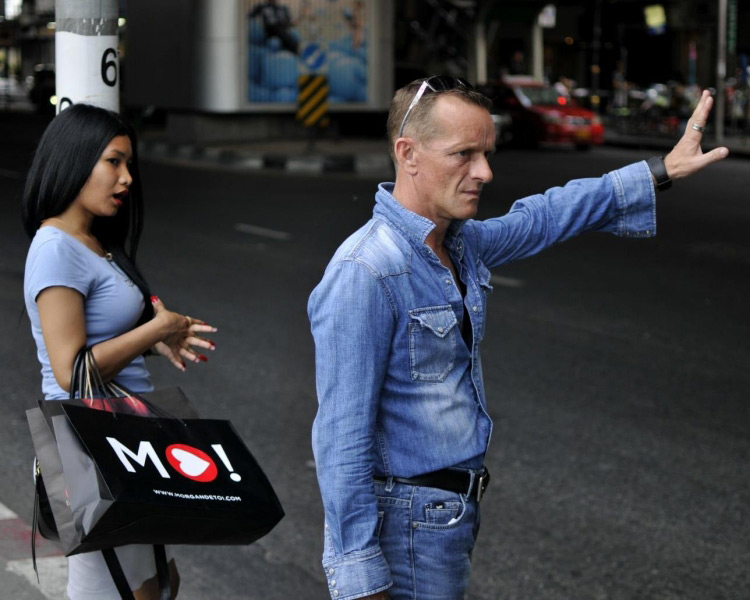 I am not a big fan of Pattaya, and rarely visit this place. I do not want to insult anyone, but most people I see there are very disturbed. I don't feel like taking anyone's picture, because I just do not feel comfortable there. A few days ago I visited the place for a day, walked on Pattaya Beach and still did my photography stuff (I thought, what the hell, why not?) Expect for a crazy motorcycle taxi guy, who got really mad when he saw I took his photo, and demanded I delete his pics, and he even wanted me to flip back and forth through my last pictures to be sure I had deleted his photos, an Indian who walked to me, waving his hands and screaming 'I know you kind of people always have something against us!' (he must have some serious issues) and a 'street prostitute' who gave me the finger when I wanted to take her photo, I didn't have any other conflicts with people while taking their photo. A funny remark is that in Pattaya almost 60% of the people I photographed, said: 'you take my photo, 100 baht ok'. I just smiled and waved. It must be something in Pattaya to ask for money, I suppose 😉 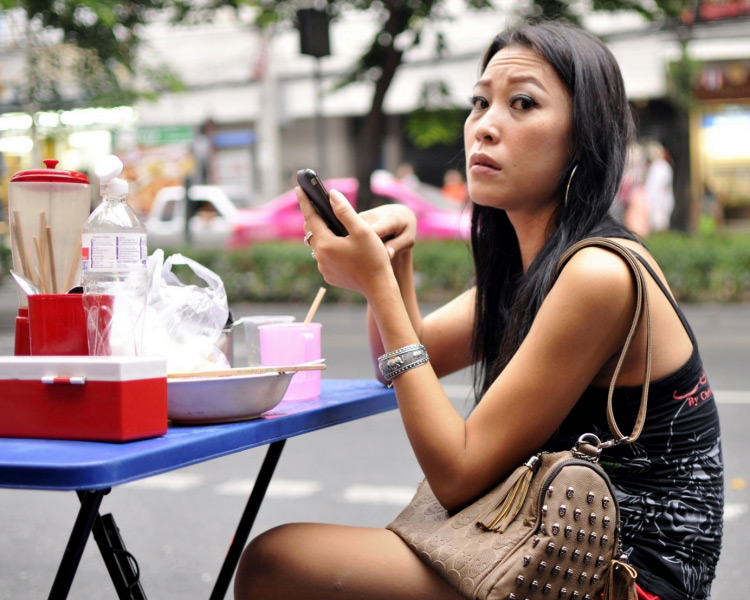 For me, street photography became my hobby and something I really love to do. I don't make a selection when it comes to race, female or male, Thai or foreigner, however, I always follow my gut feeling, and when I see that a certain person really
doesn't like it when I take his or her photo, I just walk away. There is always something happening in Bangkok, so this is a perfect place for me to do what I am doing. There is not a real purpose of taking photos of strangers, some might
call it art, some might call it a waste of time. But I enjoy doing this type of photography and in my idea it's great to 'create' something out of nothing. All the scenarios for taking a 'interesting' photo are there
already, it's just the person who does something with that scenario and captures the moment, making it Into a little piece of history. 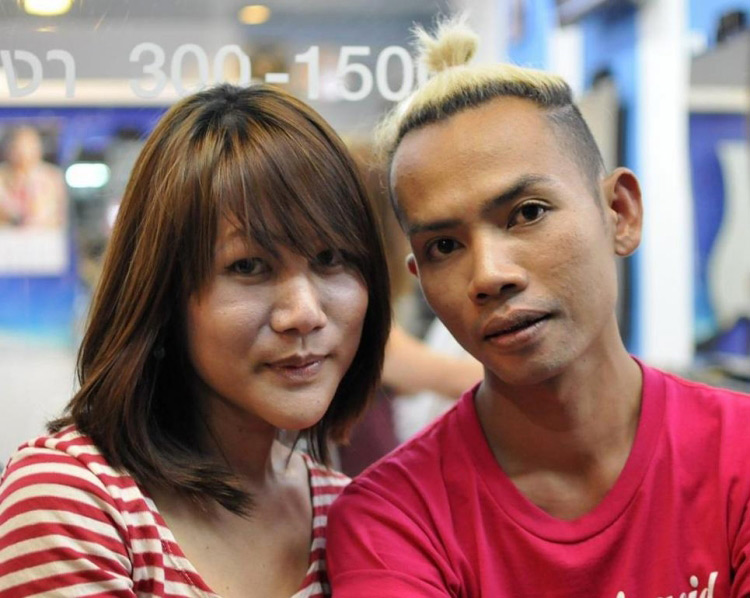 Like you, I love street photography and it is a bit passion of mine. I have noticed a change over the years and people are less keen for their photo to be taken. If someone so much as intimates to me that they don't want their photo taken, I won't. But then I did invest in a telephoto lens to get sots from some distance so often people wouldn't know. Still, my buddy Steve will tell me that as a street photography purist I really should stick with my 35 mm lens….and using a telephoto lens is kind of cheating!

The Chances You Take On Thai Dating Sites