Getting Around – South Easterly Direction, April 2012

I've been coming to Thailand for 6 years now and had never been to Pattaya – yes, some kind of a freak I know! Even this time it's only because a mate has set up a factory nearby. I remembered reading a submission some years ago on this site about riding in a train from Bangkok to Pattaya. Probably not many people would consider that idea a good one. I did consider it because I like to relax and be totally safe at the same time even though the train in question is the third class fan only model, but then I went to the Thai railways web site and discovered that it leaves Hualumpong early in the morning, sometime before 7 AM. That's a crap idea! It was the bus then, from Ekamai. Problem at the Pattaya end is, as documented previously in the Stickman chronicles and for the uninitiated (me) at least, the lack of the usual convenient Thailand transport arrangements – what you get is taxis that don’t meet buses and don't respond when you wave, no tuktuks, and so you're left with those bloody uncomfortable ute things with seats, hate 'em!

First surprise is the size of the city. It's on a scale way larger than I had imagined. Second surprise, after booking into the hotel, is the mix of the population – foreigners of all types galore, including a large percentage of eastern Europeans followed by a smaller but still large number of Indians. No offence meant here, just different I guess to my previous experience in Thailand. They even have their own TV channels. The quality of restaurants can be outstanding – I ate spaghetti bog which was the best I've ever had (and I've visited Italy) – went down well with a couple of glasses of excellent Italian wine – hard to find wine by the glass in most parts of Thailand, and in another place I ate pizza which while not the best (that is reserved for Italy) was bloody good and also washed down with some good Italian wine. I also ate a hamburger which was claimed to be made with genuine Aussie beef. It was the real deal, twice the size of a McD's, and tasted divine!

I had to hang around for a few days until it was possible to visit the factory – there's more than enough of everything in Pattaya to make hanging around possible without getting bored…. The depth of the entertainment area away from the beach and the concentration of bars, massage shops, eateries and accommodation per square kilometre is astonishing – surely it's the capital of the world for that sort of thing?

The factory I visited is in the *large* industrial zone east of Pattaya called “Eastern Seaboard Industrial Estate”. Large? – it's fuggin huge! Companies like GM and Ford, Isuzu, Suzuki, Nissan, Mazda etc and all the support companies – amazing to see. And all very new and well organised, the whole estate is required to meet ISO 9001 standards, quite unlike any other part of Thailand I have ever seen. It's around 40m above sea level, so no flood problem. I reckon it covers 1000s of hectares.

A problem inherited with the area is that previously there was little in the way of population as the land was considered not productive in the farming sense, so the local population was small and housing has had to be built on the fringes for all the workers – they are bussed in and out of the estate morning and night. There is a huge demand for workers – those with experience more sought after, straight off the paddies of Isaan less valuable but still wanted. I notice the Thai government is mouthing the words 'labour shortages' and creating a regulatory environment for getting people in from neighbouring low cost countries, Myanmar, Cambodia, bizarre. A consequence of this is that for my mate's company getting competent labour is tricky – GM for example recently opened an engine plant there and sucked up about 1500 workers. If you were a Thai guy, who would you rather work for – GM or some piss-ant little company from Australia you'd never heard of before? Many of the executive class live in Pattaya, my mate for example lives out the back of the city in a suburb he calls 'the dark zone' – in a very nice development costing the company $500/m. 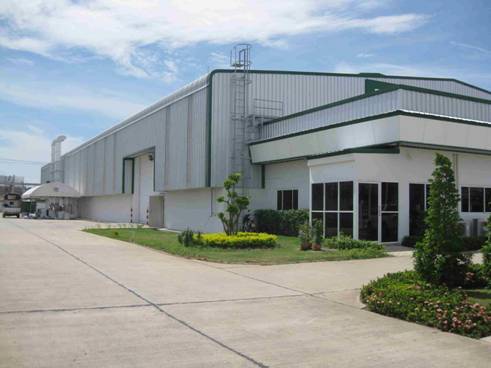 And of course every factory has to have its spirit house: 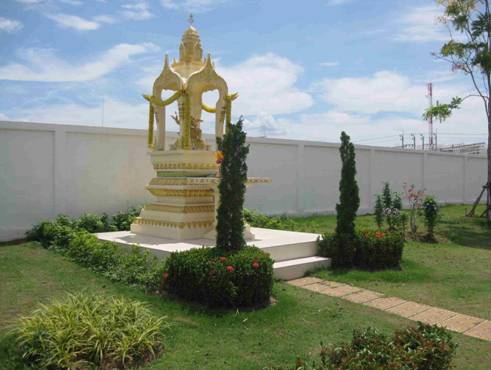 I can't comment on financial arrangements and incentives the Thai government makes available, suffice to say that it's a pretty good deal, and all areas of commercial activity have been addressed to make it easy, including good transport arrangements for shipping product.

With free time I wandered around the city of Pattaya. First day the sea looked green and quite swimmable, so next day headed down to the beach prepared in my togs, and although the look of the water was not so good at close quarters, I ventured in – up to my knees and rubbed my wet fingers and thumb together – the water was definitely oily, so I backed out. Sitting on the beach on a chair under an umbrella – looks good in the brochure but very soon you get very annoyed by the constant stream of people trying to sell stuff. Interesting to see talent available all day along the beach front. Next day I tried it again because the water looked a bit clearer – it was not oily but the heavy load of particulate matter in the water made me stay dry again. In fact the swimming idea is a complete waste of time there – if you want to do that then go to another address, nowhere near the gulf of Thailand.

Walking in Walking Street was the usual problem in Thailand – constantly dodging bloody motorsai and cars, vans etc. Is there anywhere one can escape? That was in the daytime, didn't bother at night. In fact farangs are well represented in the population of motorsai riders and are just as hazardous as the locals. What do you see? The bodies on offer vary – some good, some not so good, some old, some young, and last but not least some fat slags (plenty of 'em in that category). The ladyboys look ladylike (mostly) and the farangs look…old. The Eastern Europeans and Indians look a lot younger. A youngish Russian at my hotel was a rude bastard – wanted me to vacate my breakfast table 'cos he deemed it more desirable than that table over there. Needless to say he got told…

It's an amazing city so will have to get down there again sometime for some serious R and R. Why did I wait so long?

Pattaya is indeed an amazing place. I always enjoy my visits, but find after 2 nights I need to get out of there!

Not One of them Is Named Somchai