OUR EXPERIENCE FROM THE START OF CONSTRUCTION:

Our current house was built on filled land that had been filled only months earlier (see picture in Part 1). If you have a house on filled land you can expect the land to compact and do some interesting things over time. In order to avoid the sinking problem the house must be built on a foundation that extends well below the fill dirt into solid ground well below. Our builder digs down 1.85m to pour the initial platform for the house foundation. This is well below the .5-1 meter of fill dirt. 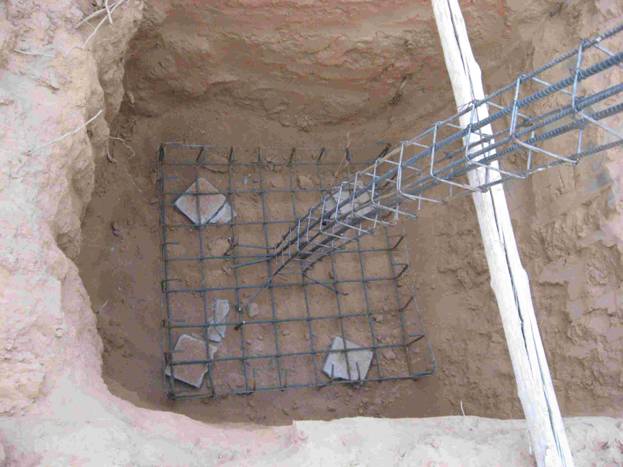 Note the large steel rebar reinforced platform at the bottom of the hole. 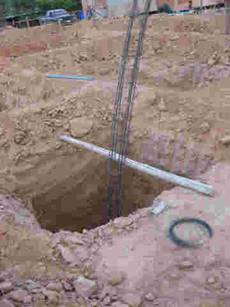 The eventual cement steel rebar reinforced column supporting the foundation of the house is built up from the platform. If you look closely you can even see where the fill is and solid ground meet.


You just don’t find this type of construction in the less expensive houses under 5 million baht. I learned this well from the experience of our first house.

On top of the foundation pillars (which extend all the way to the ceiling of the house) the actual foundation is laid and the house begins to take shape. 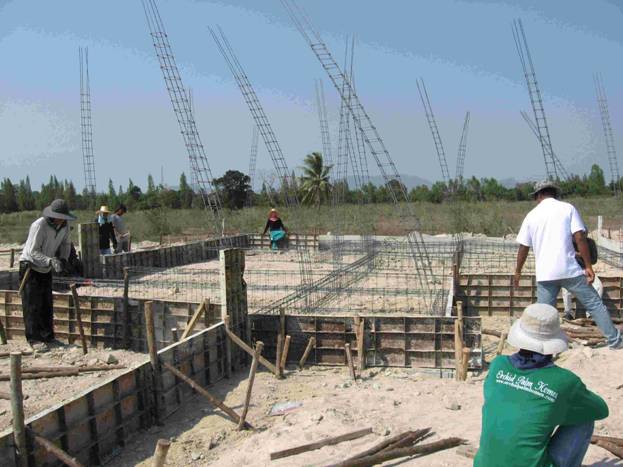 
The pipes for water, sewer, electric and drains are laid under the floor. Pre stressed cement planks are then laid across the foundation and cement is then poured on top of the planks to form an approximately 10cm cement floor for the house. 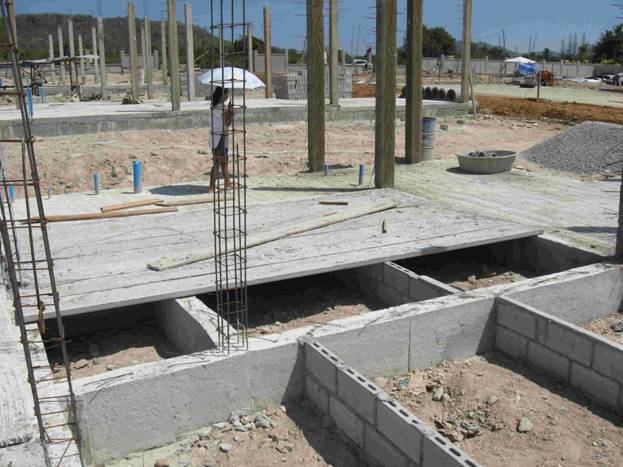 Foundation Poured and reinforced cement planks laded over it. 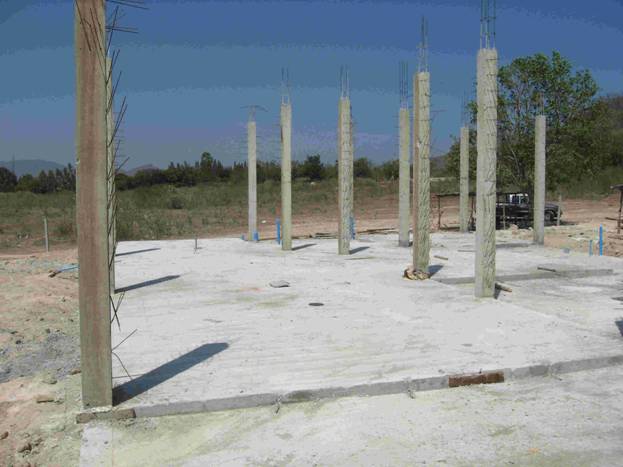 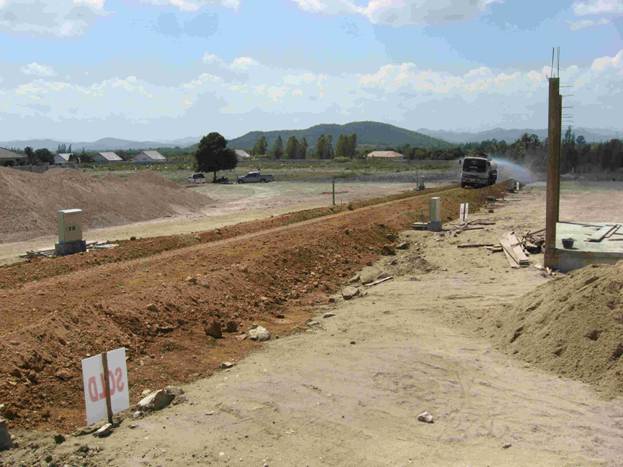 Base for road in front of house being put down.

At this point there will be an additional ceiling foundation (I like to call it) that connects all of the exterior pillars so as to lock them all together at their top. Ours was done with steel but the latest models constructed in our complex are of rebar reinforced cement horizontal columns. Again, this is not construction you will see in less expensive houses. 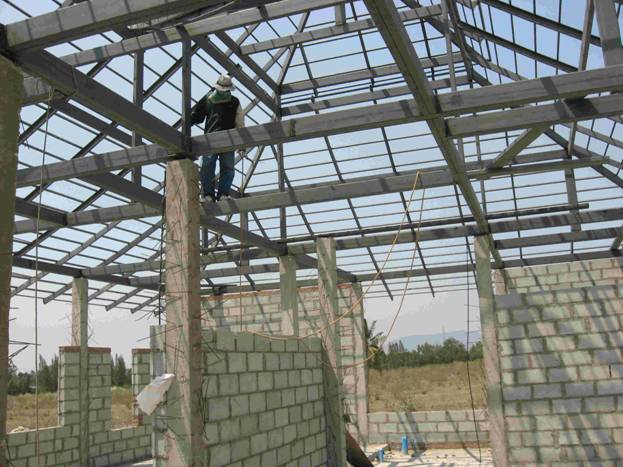 
Once the pillars are all locked up the walls go up. There are two types of materials used for the walls;

1. The old Thai way is to use the small red bricks that are about 5 x 6 x 16 cm or smaller ones that are 3 x 6.5 x 14 cm. Just keep piling them with cement between one on top of the other either the long way or the short way. Some walls are 5-6 cm thick and others are 14-16 cm thick depending on how the blocks are placed. Most of the less expensive houses are made with these red bricks and some of the more expensive houses too.

2. The more modern (in Thailand) way is to use the standard cement block that is either 7cm thick or 14 cm thick and has two holes between the walls of the block. 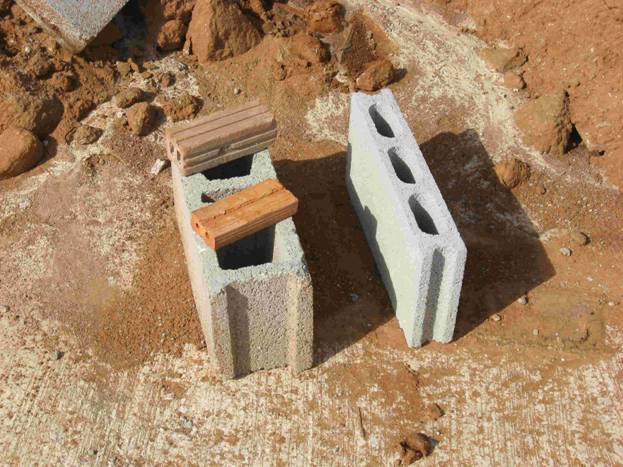 
I learned a big lesson when talking to the builder of our second house. The less expensive and some even more expensive are constructed of ONLY 7cm thick cement blocks. The 7cm thick blocks don’t provide much insulation for the house nor do they provide the strength in the wall as well as the 14cm thick blocks. More importantly you can lock a 14 cm block to the column by inserting steel rods in the cement column and cementing the blocks onto the steel rod. 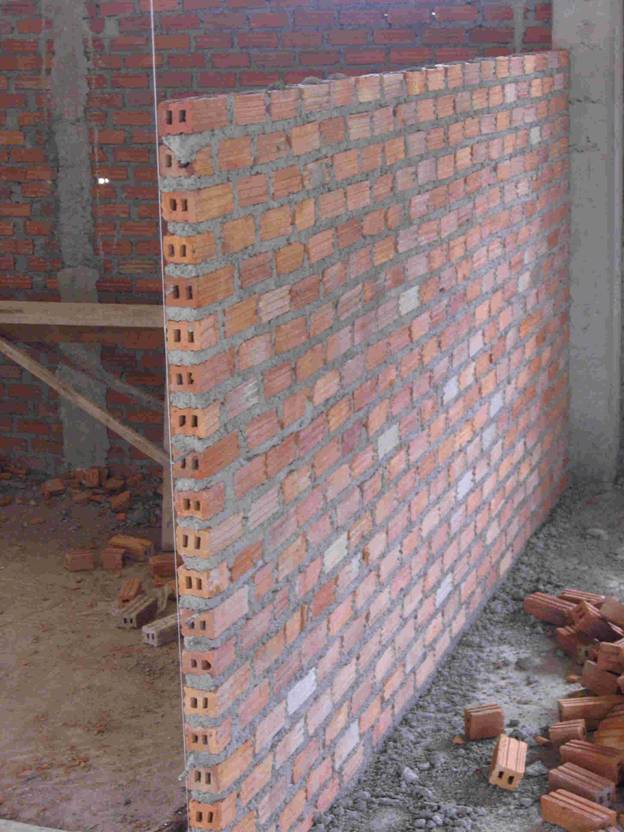 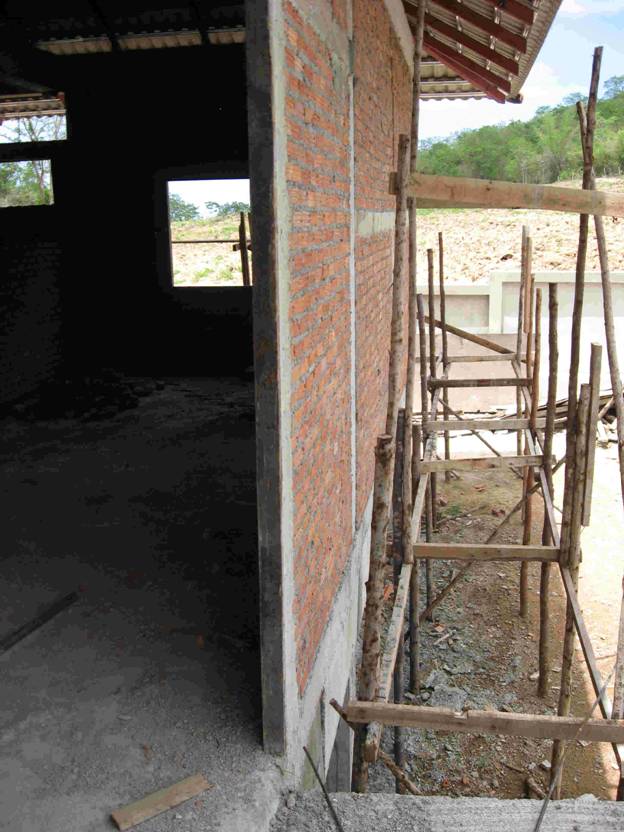 Thin the exterior walls with the red bricks. Little insulation from hot sun. 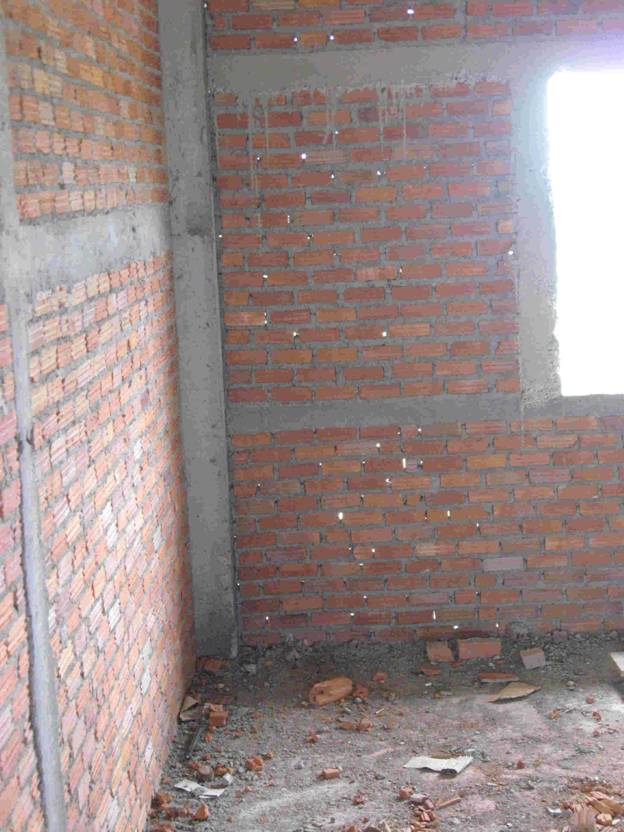 These light holes in the exterior wall show you how strong it is. It will be plastered over both inside and outside to cover up. 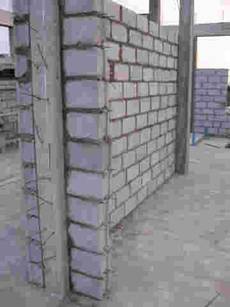 Note the steel rods sticking out of the vertical column and again out of the 14 cm wide cement block.


Our former house, built of 7cm wide blocks, was so warm (when the sun was on it in the afternoon) and was also the reason the walls had so many cracks in them. They were continually being repaired by the builder over our first year in the house (we were fortunately then able to sell the house). Our current house built with 14cm wide blocks has NO cracks in any walls after almost two years.

The old way to put a roof on is to build with wood and hope the insects don’t eat it all up. The “newer” way is to use steel beams and tubes and coat them with a rust proof primer. The steel beams and tubes on the roof are “welded” into place and a layer of insulating foil gets laid over the steel and the roof tiles attached over it. Hopefully the roof will not leak but with all the fancy roof tiles that are now available, don’t count on it. We have found it common, however, after talking to many and experiencing it ourselves that the roof may leak when you get a real torrent. Crews were sent up on our roof several times when we heard the dripping sounds on our interior ceiling. They finally figured out what to do and there have been no problems since. 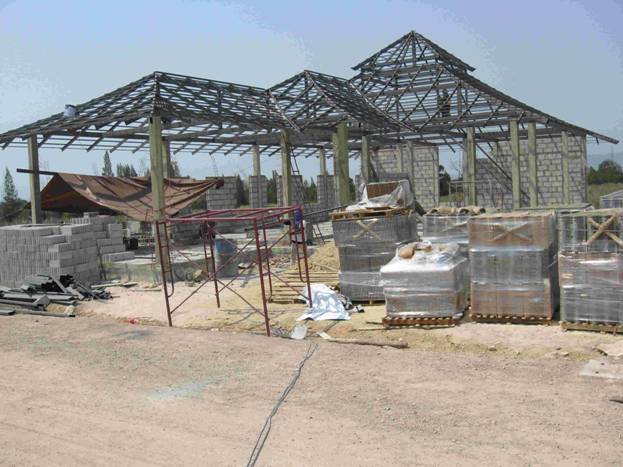 Roof almost completed and ceiling tiles are stacked up waiting to be laid.

Now the interesting part starts. Cutting or chiselling holes and groves in your walls to put the plumbing and electrical tubes in place. (In the less expensive Thai houses they just lay the wire down the wall and nail it into place after the wall has been plastered) The chiselling and breaking of the walls looks like a mess during this process but when the walls eventually get plastered you can’t see anything. 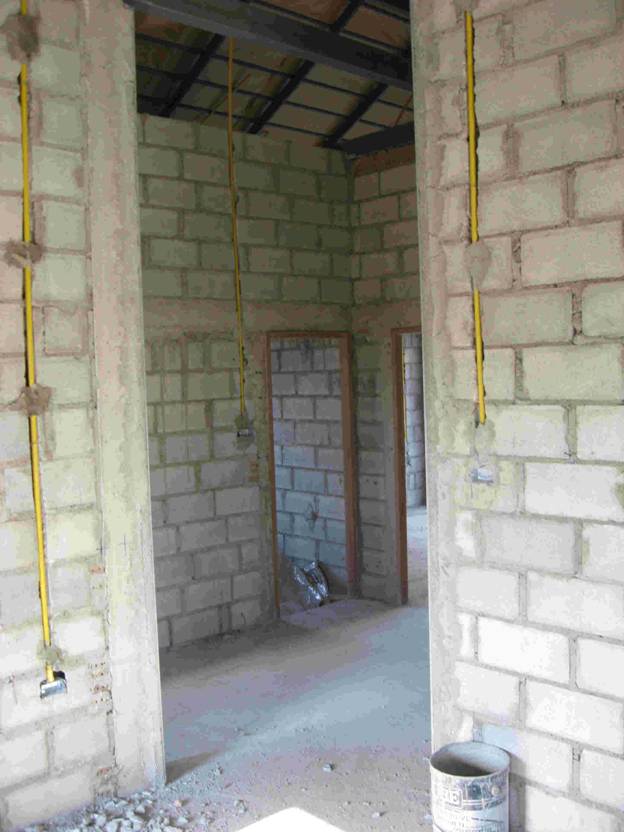 The floor tiles and bathroom tiles are laid and its beginning to look like a house now. 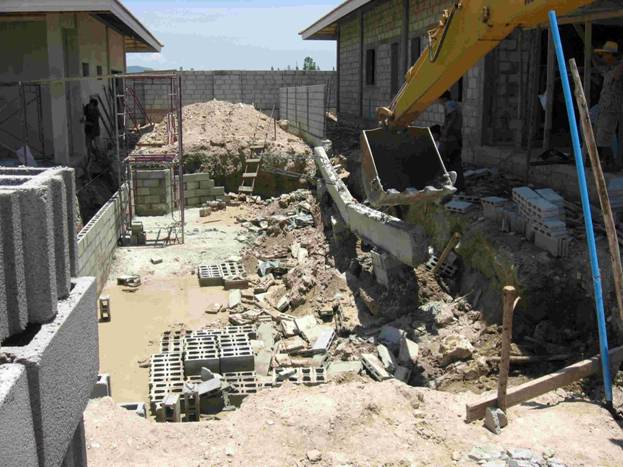 Woops! Big rain & water from roof next door washed out unfinished wall and side of pool. 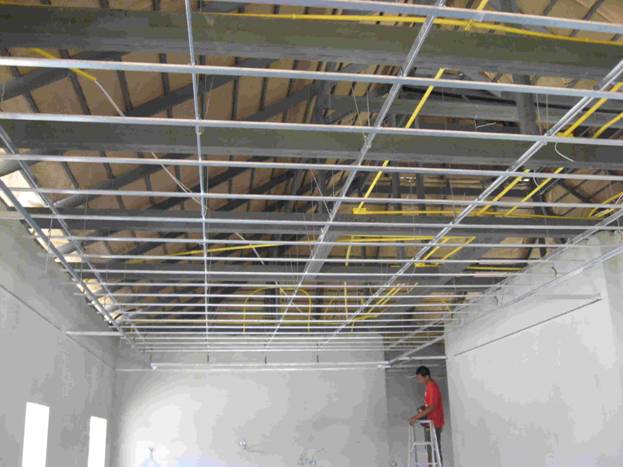 Dropped ceiling with electrical conduit above in attic. 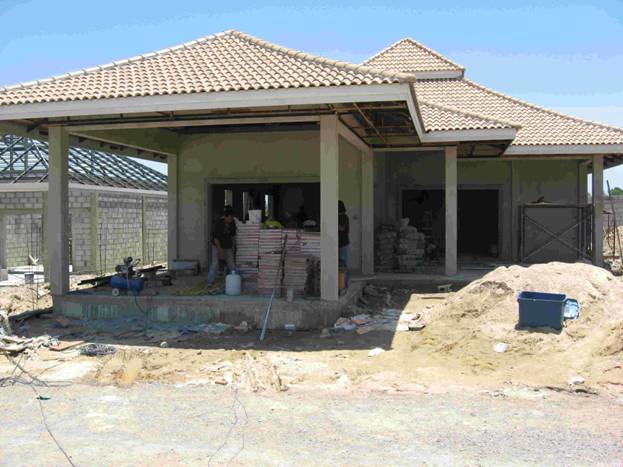 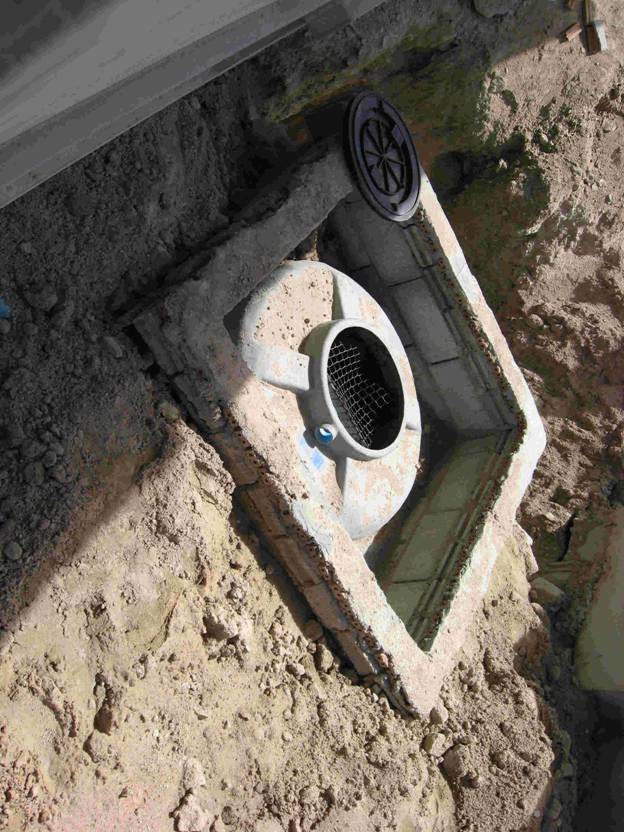 Oh yes & you have to have a poop tank.

Many houses in Thailand, especially the lesser expensive ones, will give you four walls and its up to you to furnish the bedroom and kitchen yourself. As you go up in price more is included and built in as part of the house. Our house included all the standard cabinetry in the bedrooms and fully fitted western kitchen. I had the dresser drawers (desk) in the 3rd bedroom custom made to accommodate pendaflex file holders so I could store files in the dresser and not have to have a separate file cabinet. Also able to put my computer on the “dresser” and use it as my desk. Had double sink put in kitchen (single is common), a space big enough to house the refrigerator we wanted to have (they were going to provide a small space for a small refrigerator) and when I saw the gas cabinet on the outside of the house, had it ripped out so we could be the ONLY house with an electric cook top. Wife hates me for this but I grew up cooking with electric range and prefer it. 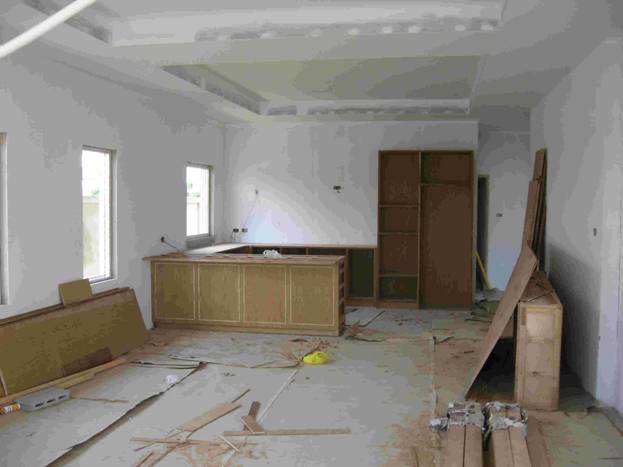 Tile floors (covered) are done & cabinets being made on site and installed. 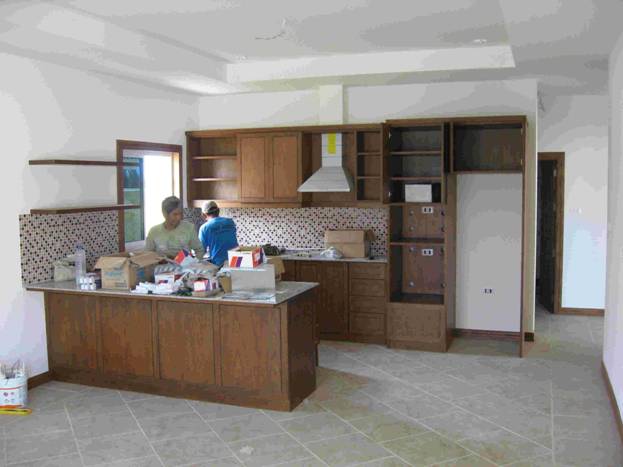 Getting close to being done now. 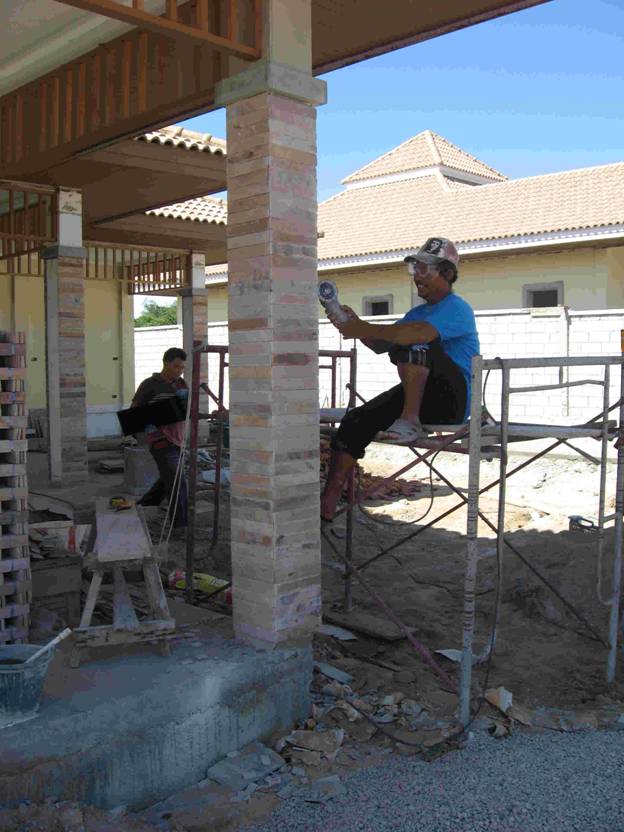 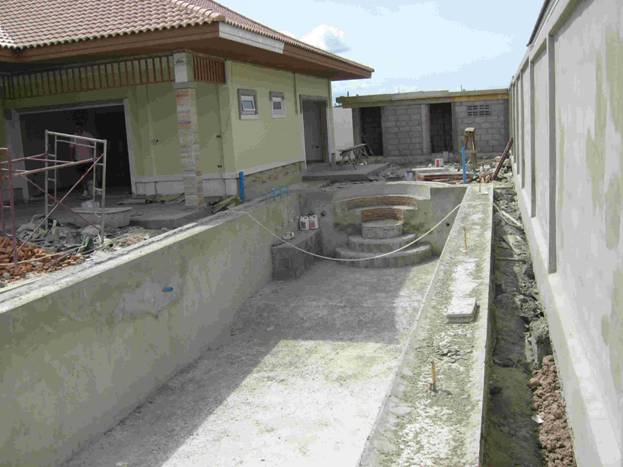 YEP, the Pool & wall got put back together. 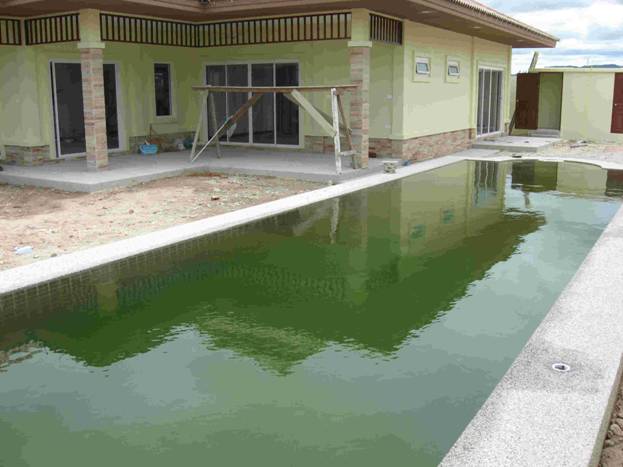 Getting closer now. Pool just filled with water & looks quite uninviting until filter is turned on. 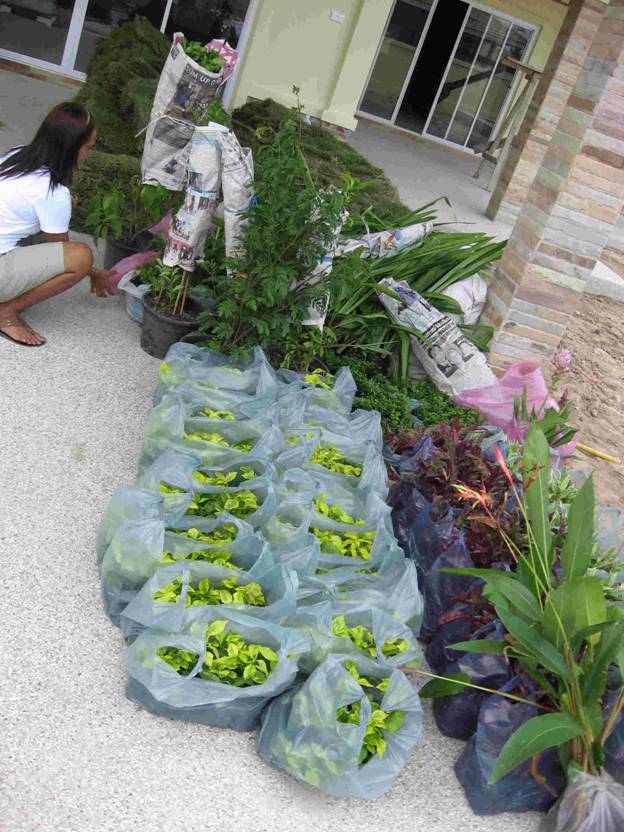 Plants ready to be planted.

MOVING IN THE HOUSE:

In our building contract was a clause that said house would be completed by a certain date and a penalty of 1,000 baht per day would apply until its completion. Builder had assured me that he had never had to pay the penalty so I did not need to worry about it. Two weeks before the completion date I could tell that the house was not going to be completed on time. When I mentioned this to the builder he told me he didn’t think that the completion date was of concern to me but he could certainly push to get it done on time. With the amount of work that had to be done I knew if everyone was pushed to get it done on time there might be some serious compromises in quality of work done. I bit the bullet and removed the penalty so our house would be completed in good order.

Two weeks after the “deadline” had passed we were told we could move in and arrived at our house at about 2pm after making arrangements for the delivery of furniture (mainly beds), TV and Satellite all to be installed that day. The refrigerator and washing machine had been delivered days earlier and were sitting in the living room.

When we arrived at the house there was a gaggle of workers and cleaners all over the house finishing up all the small details. Amazingly all of the following happened within the next 3 ½ hours.
1. Refrigerator and Washing machine installed.
2. Furniture we had stored at friends house was moved into house (3 p-u’s and lots of labor + 2,000 baht)
3. Furniture we had purchased (beds, tables and chairs) delivered and moved in.
4. TV and Satellite got installed.
5. Window coverings for all windows and doors were installed.
At 6:30 pm the house was ready to be lived in! 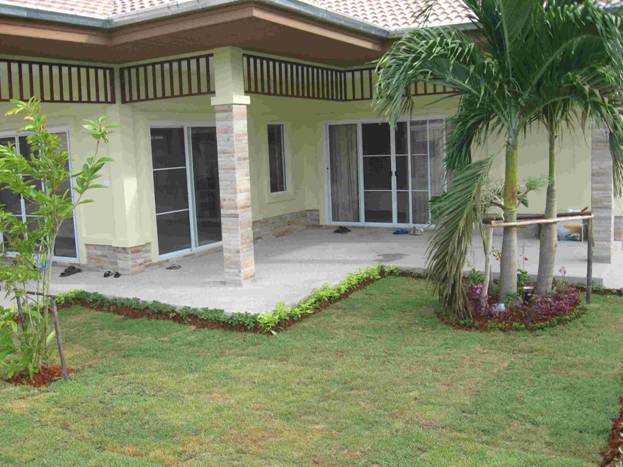 One day after we moved in.

Of course over the next few days there were little things we found that were not correct. With us being the first to move into this housing project our builder was at our door early in the next morning asking if everything was OK. With this kind of interest in making us “happy campers” we had no problem getting those little things corrected quickly. 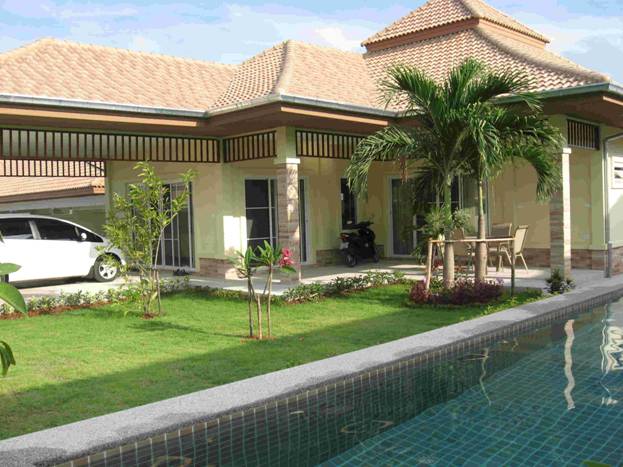 One month after moving in.

When all had settled down and I think back now my biggest regret is not having changed the ceiling mounted AC units to Daikin units which are very quiet. I asked and was told by the builder’s assistant that the in ceiling units being installed were quiet. Two days after we moved in I was very warm in the evening and I turned on the AC in the bedroom. The AC was too noisy to allow me to sleep the same as I have almost always found those types of units to be in hotels. Since then we have lived with the ceiling fan on high which I am comfortable with 99% of the time. We even had something put on the AC unit to slow the fan down which made it a bit quieter but that still did not solve the problem. If ever there was any recommendation I would have for anyone selecting AC units for their house is to actually check them to see that their noise will not bother you when trying to sleep. One of our neighbors specified that Daikin AC’s be put in his house and when I was at his house one could barely hear them when on low. They were as quiet as our Daikin AC unit in our BKK condo bedroom which only whispers during the night.

Everyone’s experiences are different and there are a variables in building a home in Thailand. My biggest recommendation is to do what Sawadee and his wife did. Bird dog the building process by being there every day possible to insure everything is done the way you want it.

Oh, and by the way, the 5.5 million our house originally sold for two and a half years ago, is now 6.9 million in the current project phase of this housing estate being built now.

Very interesting indeed, and shows what a great deal Sawadee2000 got!