* Photos in this report were taken on the afternoon of Saturday, May 19, 2012

In April and May 2010 this site was at its busiest and arguably its best as I covered the red shirt protests that took over large swathes of downtown Bangkok.

Today was the second anniversary of the day the red shirt movement occupation of downtown Bangkok came to a halt. Tens of thousands of reds gathered at the Rachaprasong intersection to remember the events of two years ago, to remember a period when a number of them perished.

This is a series of photos with but the briefest captions. The photos were taken today as I wandered around, and remembered those heady days of the 2010 hot season when we really didn't know what would happen next… 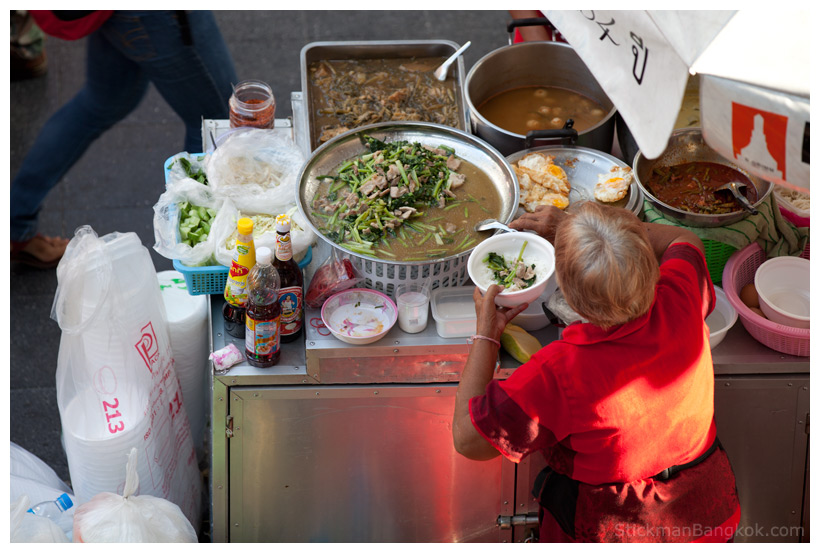 All these hungry red shirts need feeding, and boy, was there a big turnout or what?! I wouldn't like to guess numbers, but there was tens of thousands…sure! 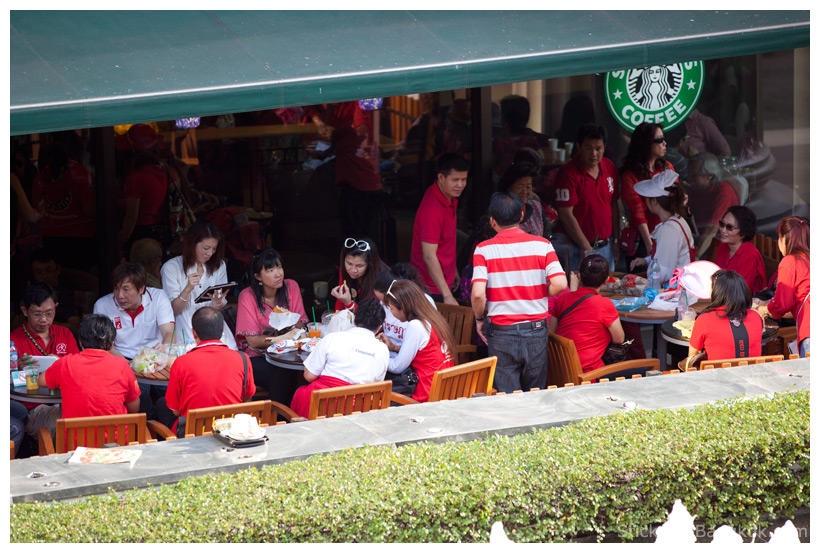 And who said the red shorts were all country people? Starbucks in Bangkok is no cheaper than anywhere else in the world, meaning it's expensive by Thai standards. 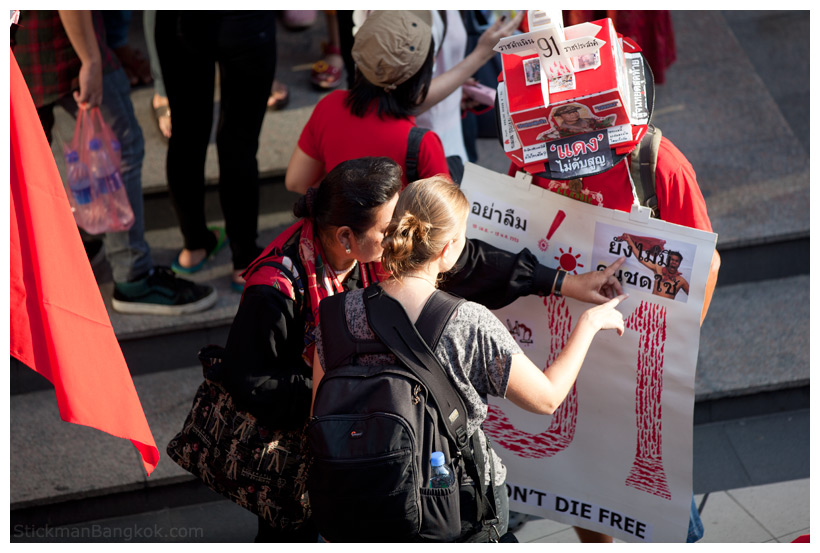 A red shirt explains how those who murdered the 91 have not been brought to account for their actions. 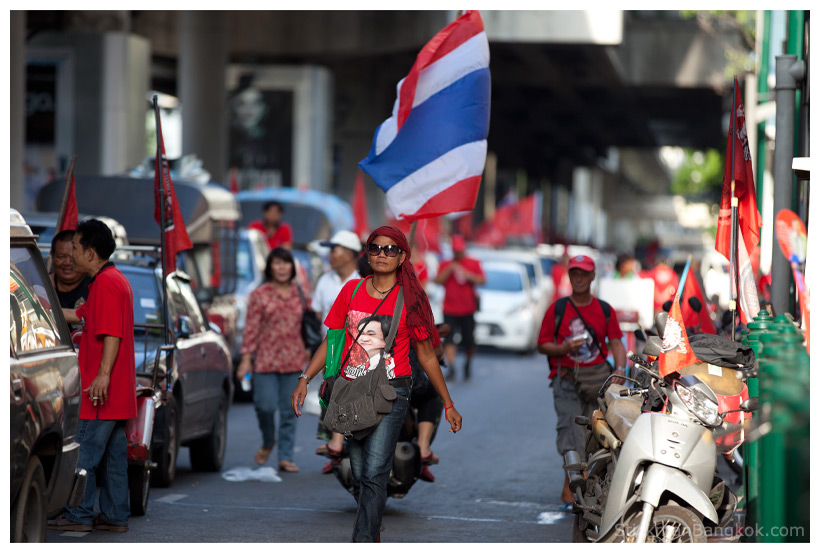 Strolling from Chidlom towards the Rachaprasong intersection. 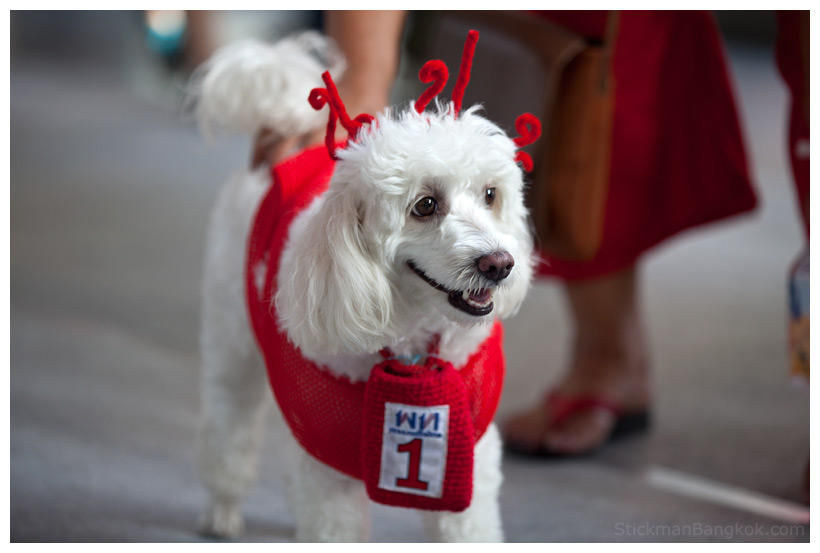 They dressed young kiddies up in red and how they're doing it to the beasts too! 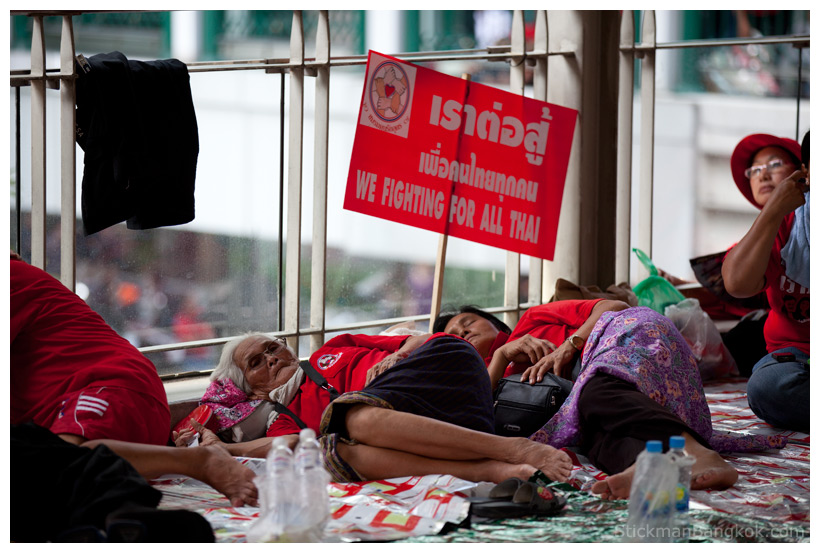 The other half, a staunch yellow shirt, was shocked to read this message and what followed from her mouth was not at all lady like! 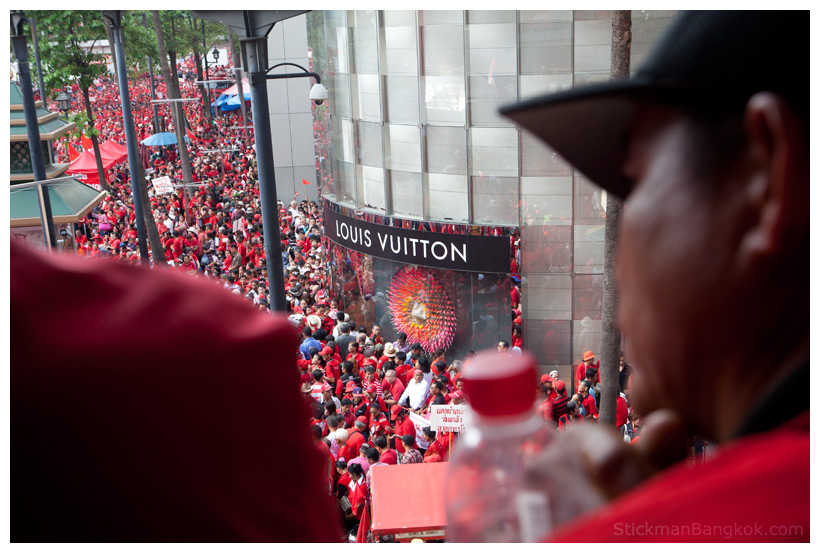 The view from the pedestrian walkway was packed the whole time I was there. 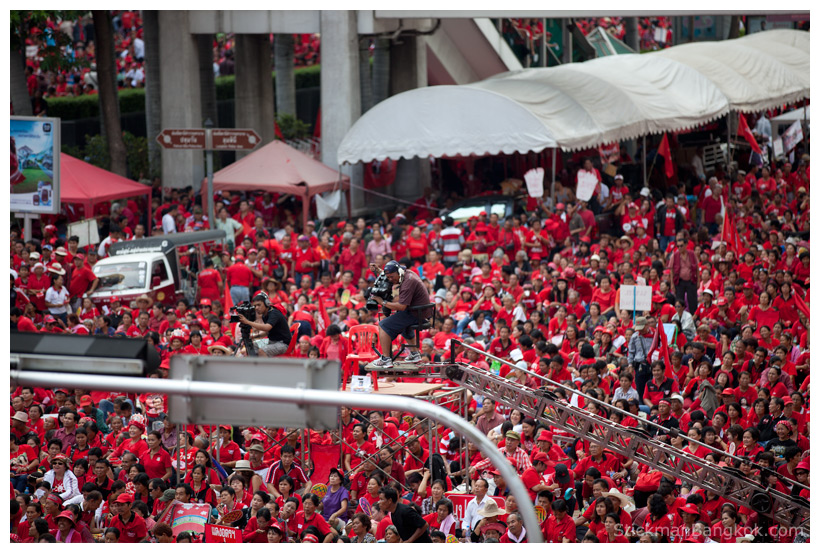 This was a big event and all the media was present. 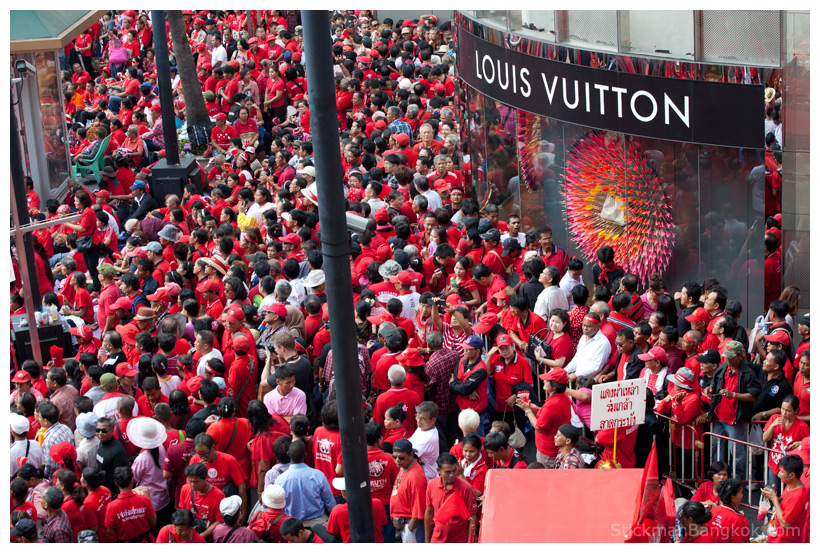 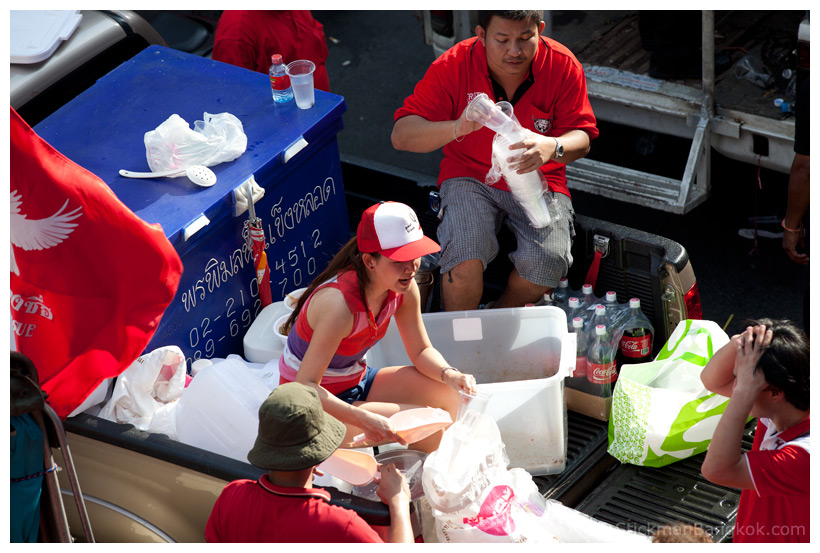 Anyone feeling thirsty? It was amazing how organised the red shirts were with free food, cheap food, free water and the distribution of other necessary supplies all very well organised, just as they were 2 years ago. 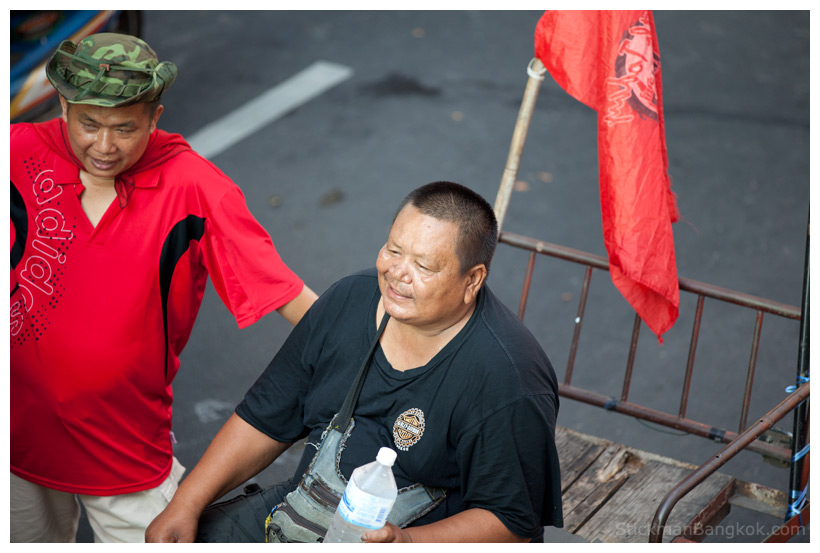 Recognise this guy? He's the hefty one-legged beggar often seen near the intersection of Sukhumvit soi 4 and Sukhumvit Road beside the police traffic control box from his wheelchair and can sometimes be seen outside Bully's. 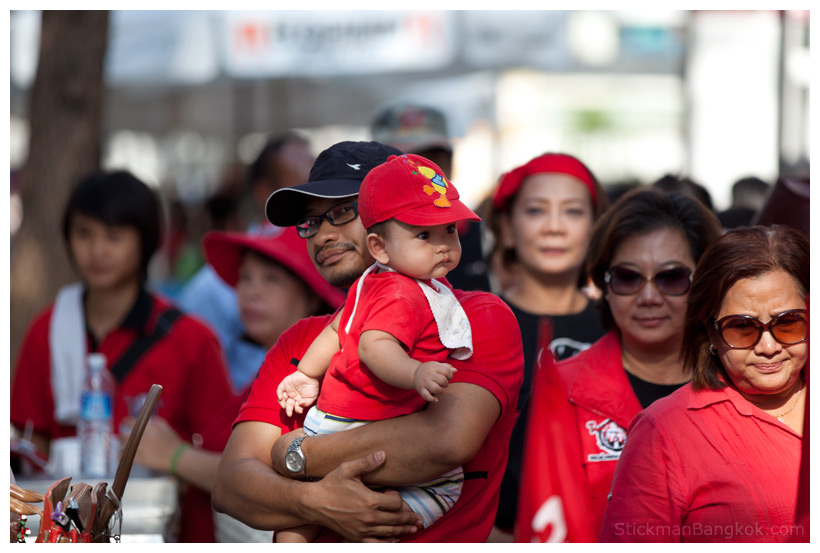 Passion is a always good thing, but I'm not sure about dressing the kiddies up like this… 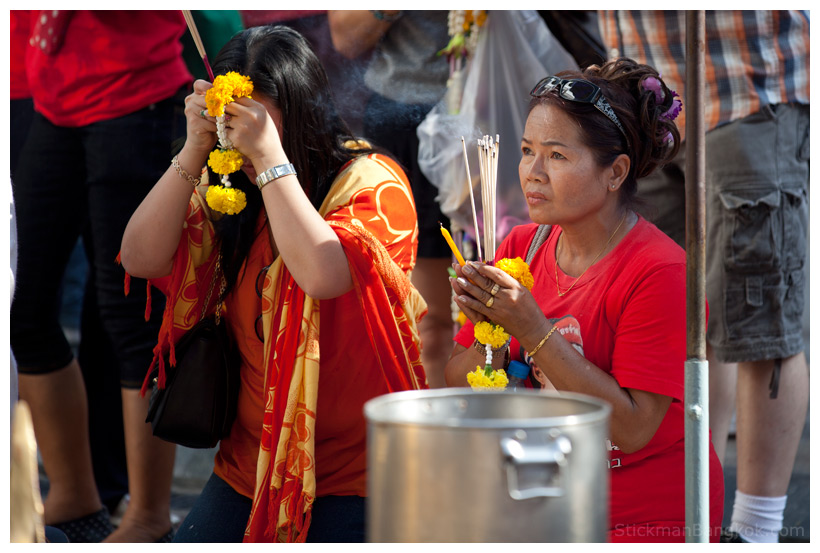 What are they asking for? Thaksin to make a return?! 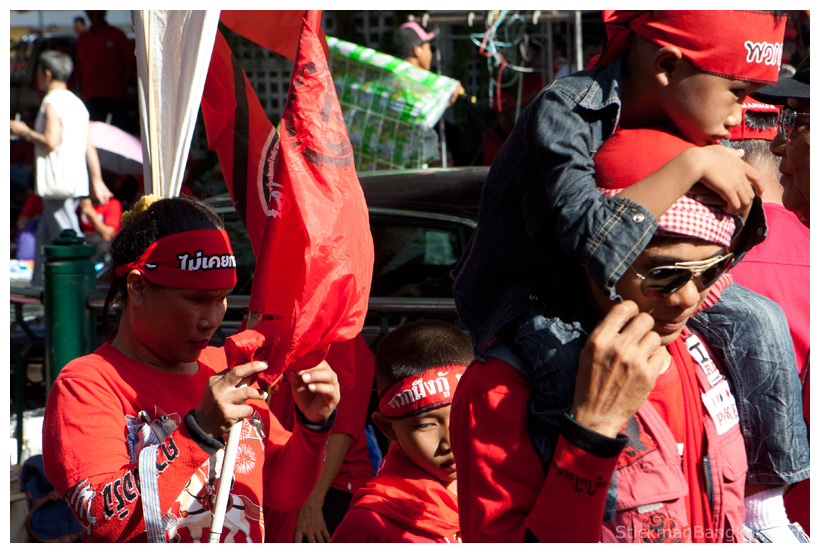 A family day out at Rachaprasong… 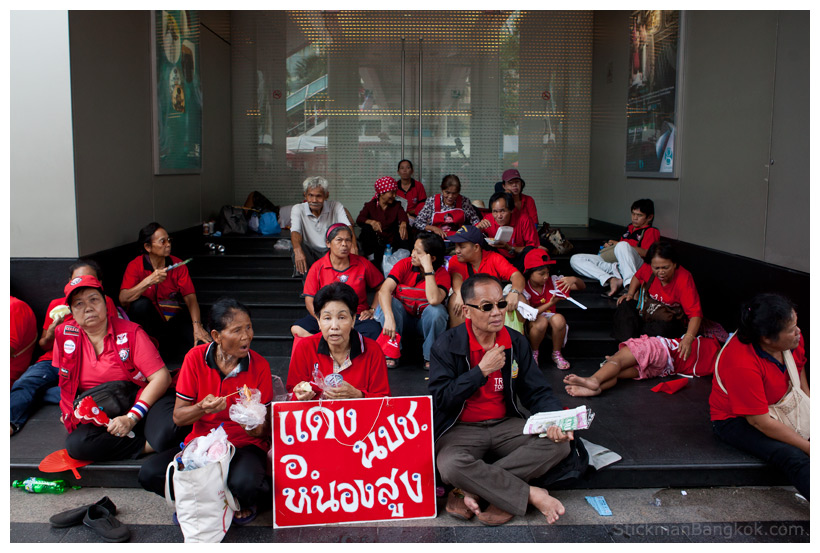 Most of the reds in attendance were elderly and there weren't nearly as many younger folk this time around. 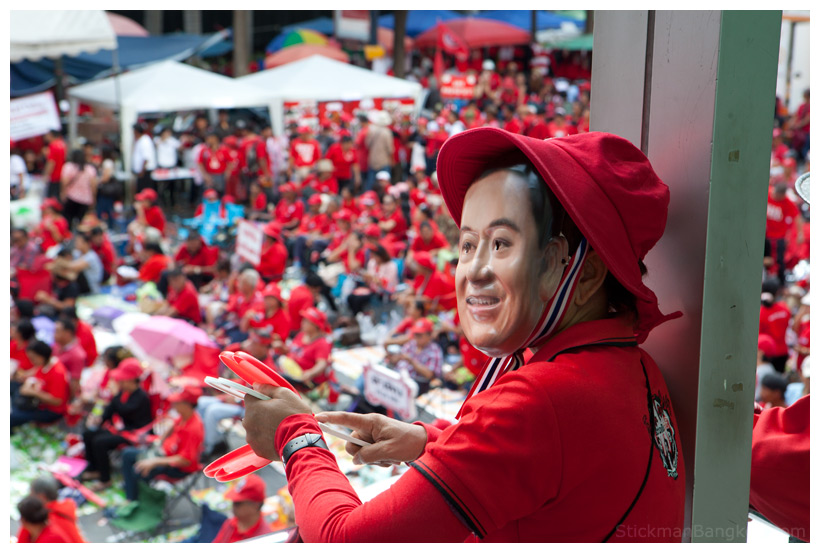 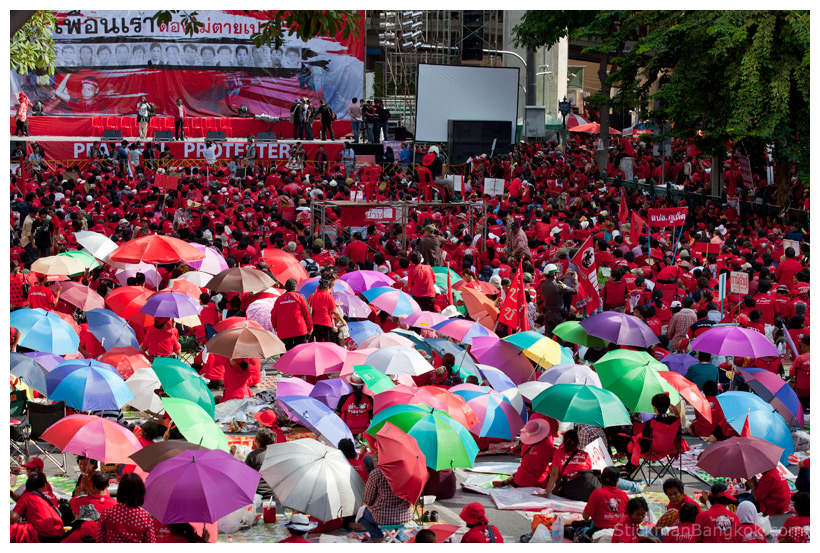 At the main stage the sun was beating down and it really was hot just as it was 2 years ago, forcing those in the sun to stay under the umbrella and keep their skin as fair as possible! 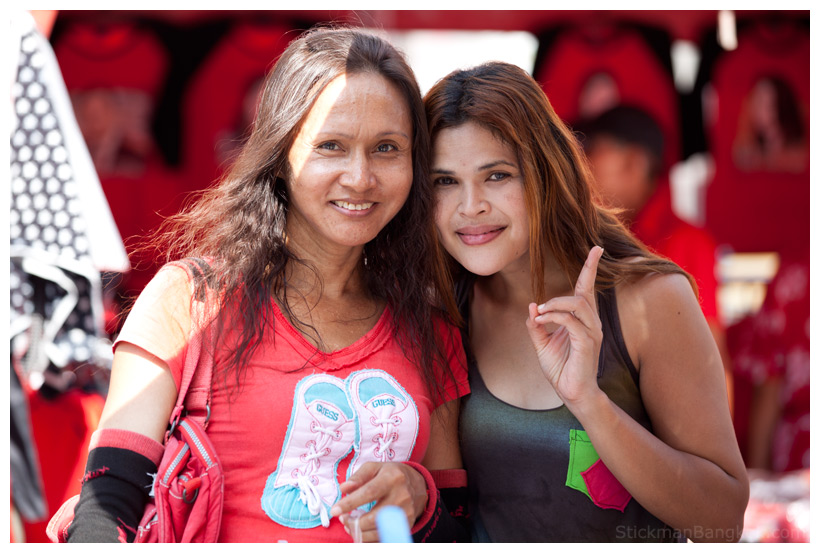 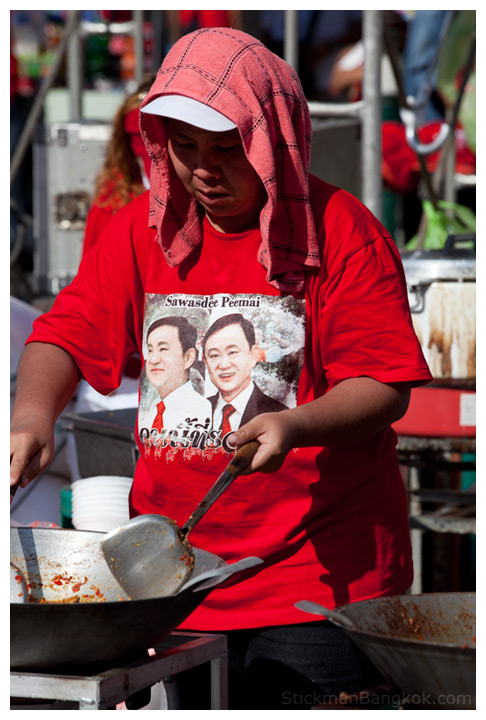 Food was available everywhere, but nearly as ubiquitous as the T-shirts, posters and other paraphernalia featuring their hero. 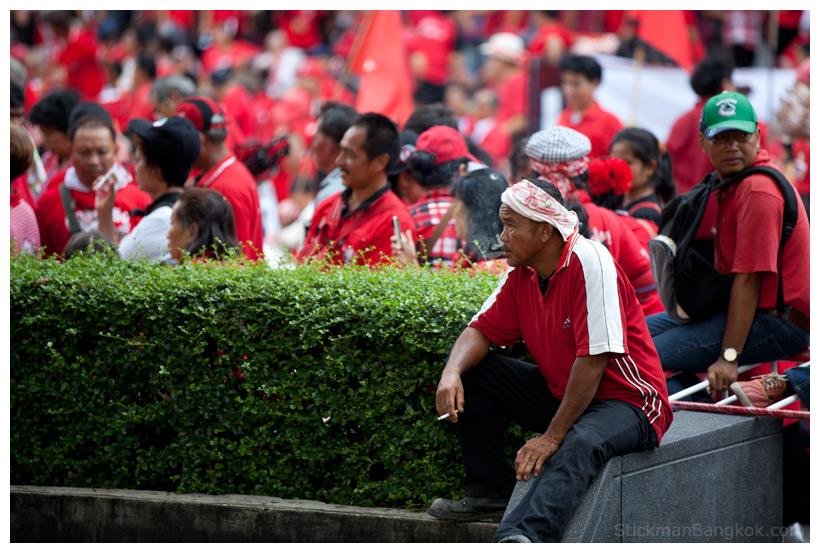 Taking a break from all the hard work! 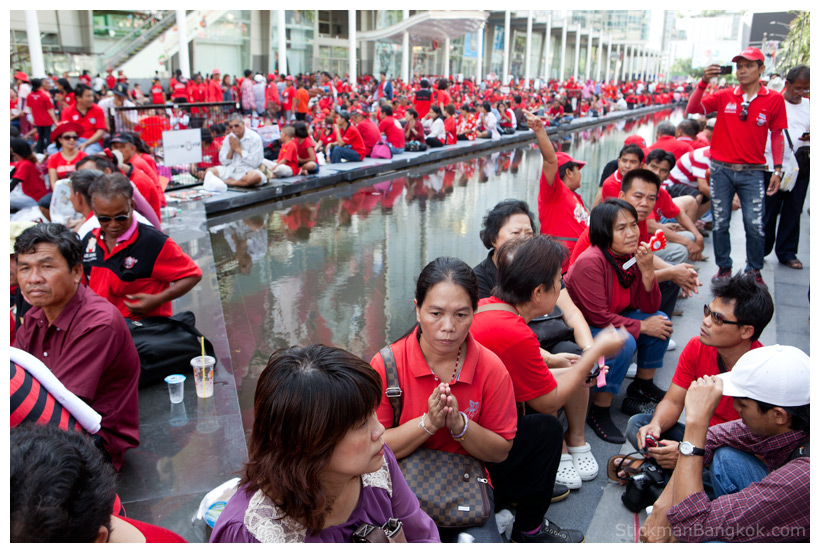 Mid-afternoon, the entire area outside Central World was packed as the crowds sat listening to what was being said on the main stage. It was much the same rhetoric as I heard 2 years earlier…. 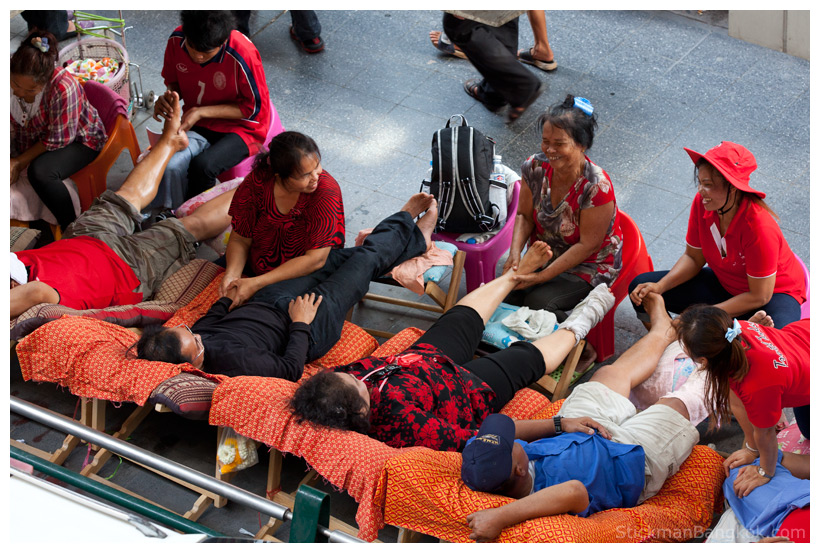 Lugging a heavy lens around for the afternoon and with the sun beating down, I REALLY could have done with a massage and was envious of this lot being looked after! 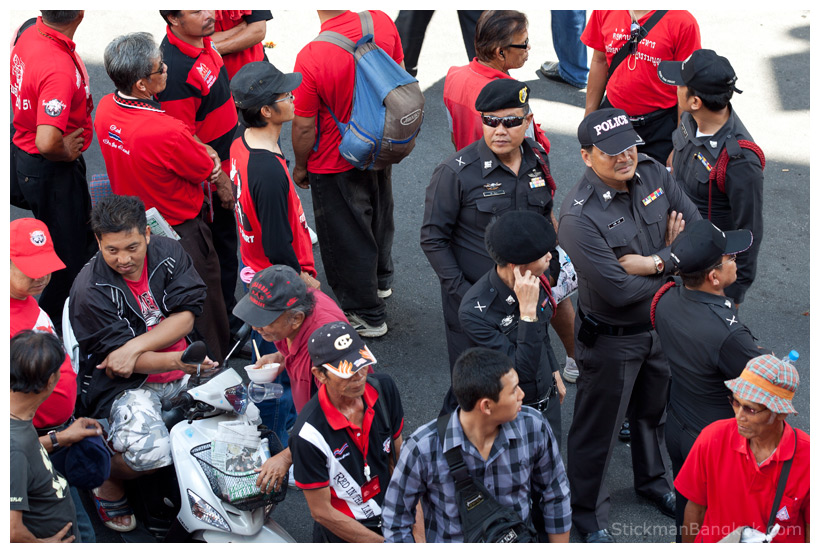 There were coppers EVERYWHERE with many different units represented. The mainstream media reported that more than 1,000 cops would be in attendance and I'd believe it. 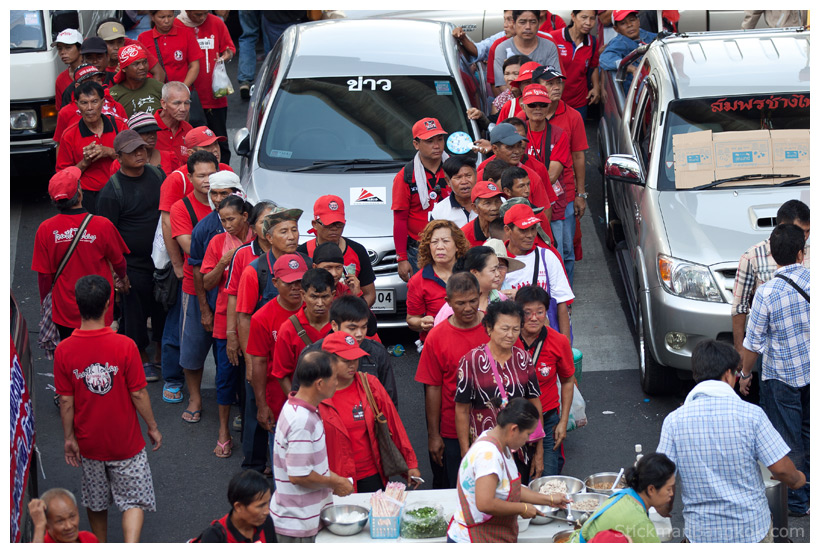 Queuing for free food, much more orderly than you typically see at street stalls and food courts around town! 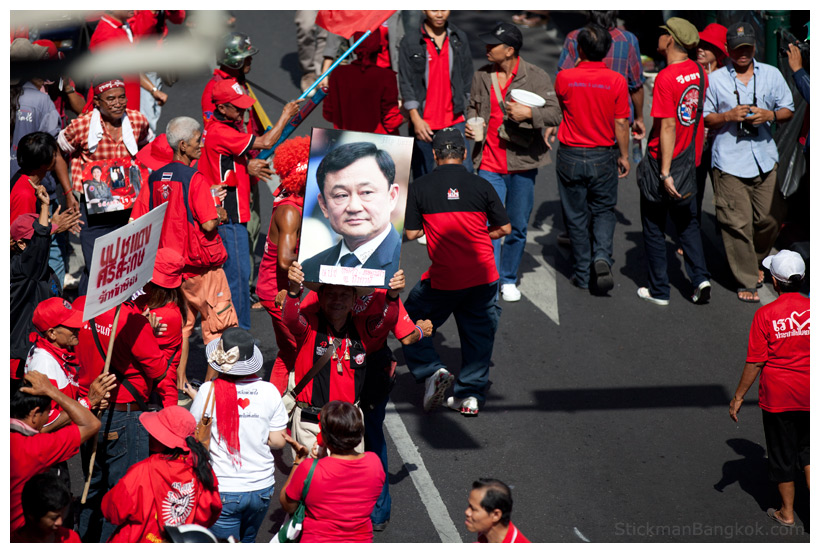 They still love him… 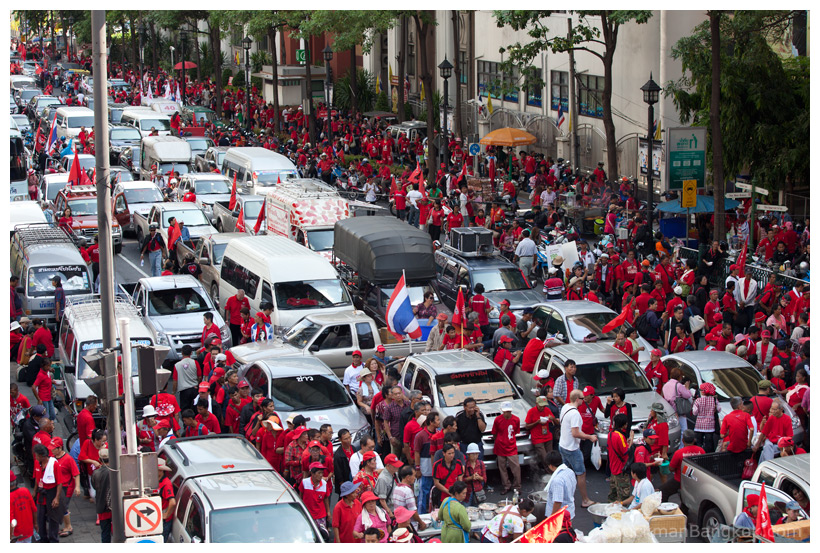 The Rachaprasong intersection was totally blocked off to traffic. This photo was taken at the main intersection, with the Police General Hospital on the right-hand side of the photo. 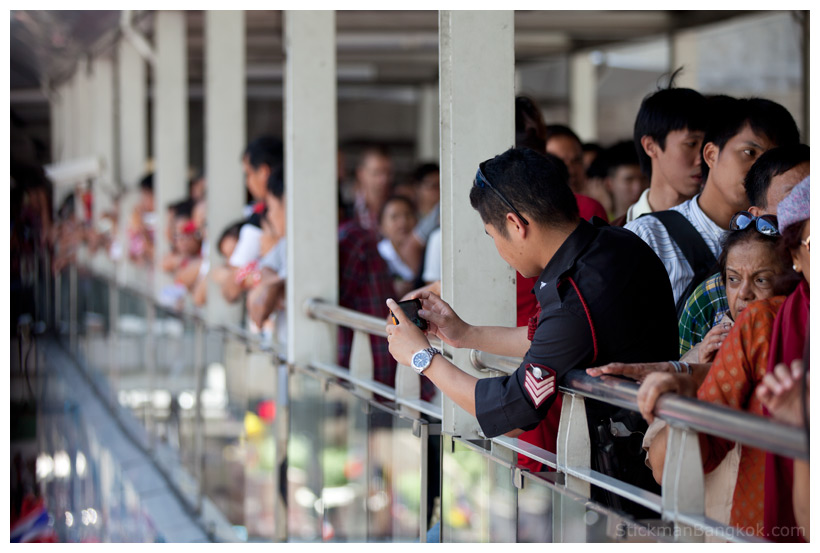 Why do I get the feeling all the coppers taking photos and videos – and there were many – weren't doing it for mementos? 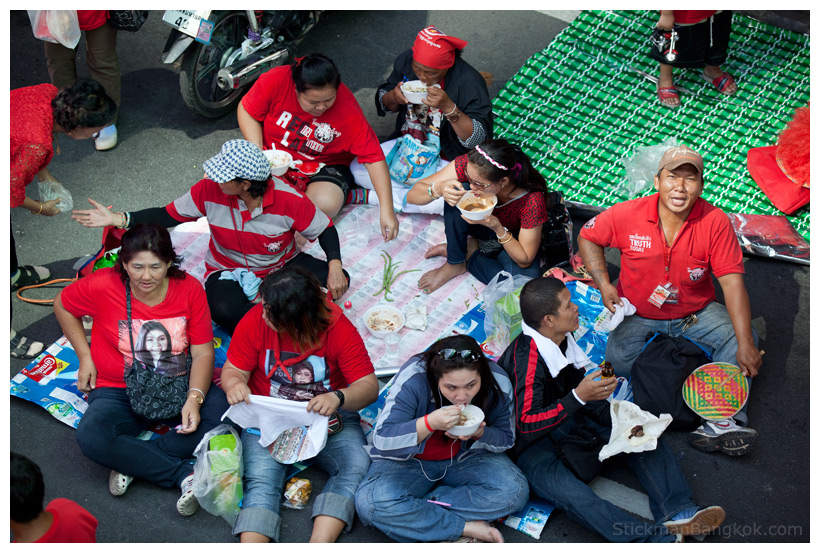 Feed them and they're contented. 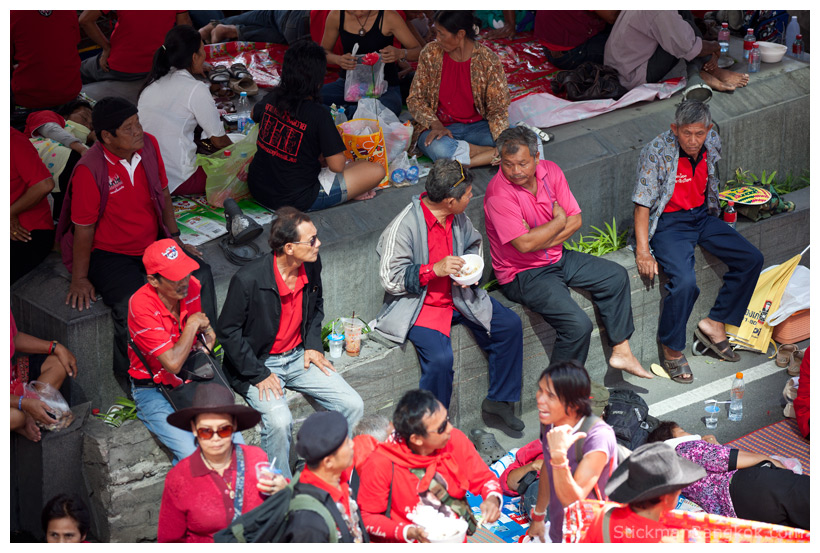 Many really didn't seem to take a lot of notice of what was going on around them and I couldn't shake the feeling that some were there not necessarily for the cause, but because perhaps they had been convinced to attend.

Maybe I'll be back for the 3rd anniversary next year?