Preparing for the visit to Mae La camp involved the obligatory shopping expedition at the local market for barbecued chicken feet, sticky rice, small Chinese oranges, beef jerky and spicy pork sausages. Plus candies and sweet treats for the kids. And finally various sundries like soap, lotion, lighter fluid and talcum powder. The actual drive to the camp from Mae Sot took some serious negotiations to secure a fair round-trip rate of 800 baht, and then about an hour of grinding up through the mountainous jungle terrain and wheeling along the snaking two-lane road in an old songtaew. 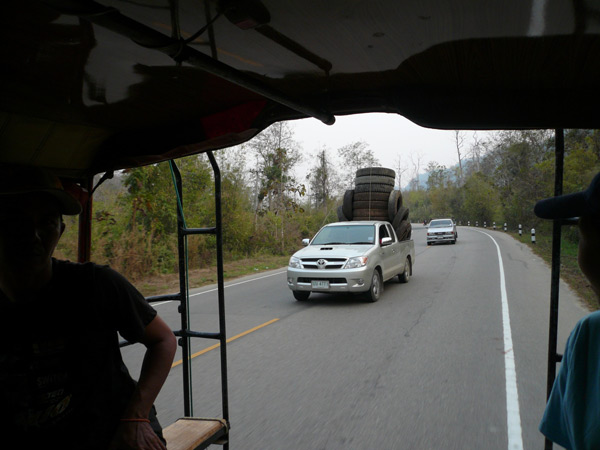 On the road to Mae La camp, being passed by a lightly loaded pick-up


The pick-up slowed as they came into the Mae La valley and he could see the first signs of the camp: some shacks with leafy roofs, a wooden and barbed wire fence and people wandering or squatting along the road. 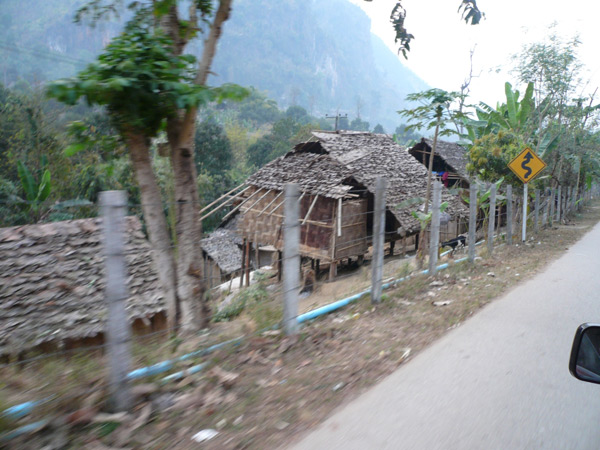 View from the songtaew of the outskirts of the camp


The shacks became more numerous and he could see them blanketing the steep hillsides with some larger buildings in the flatter areas. All seemed flimsily constructed with bamboo and wood walls and leafy roofs. Some had semi-naked snot-nosed urchins hanging around them, some older, watery-eyed elders with the opium stare he had seen in the Northern hill tribes. Thiri leaned into him and said that they would drive by the main entrance, pay the driver and get out. Then they would walk back to the main entrance where her “sister” would meet them. She had arranged with the camp sector headman to allow them into the camp…for a suitable “donation” of 1,000 baht. This was not only the “entrance fee” but also a guarantee that Thiri could actually leave the camp too.

By the entrance was a guard-post that was now conveniently un-manned, and ahead of them was a steep gulley with a dirt track leading down and across it and then off through a maze of ramshackle huts on stilts. 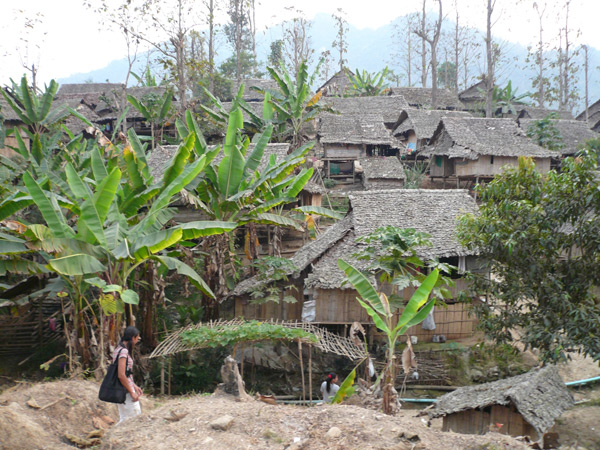 
Steve let Thiri and her sister walk ahead while he took a short video of the area. Thiri looked back to make sure he was ok and upon seeing him with the camera she waved her hands and ran back down the path while mouthing “No, No, No!” She told him they had to be very careful as the camp had spies and they were not in her own sector, so they had to be careful not to draw any more attention than was necessary and to move quickly. This was a typical example of her habit of not telling him the obvious until it was either too late or had already happened! He smiled, put away the camera and hustled after her along the path.

They passed many stilted huts, almost all of which were flimsily constructed so that there were many gaps in the wood, straw and woven bamboo walls, and in most cases the large leaves on the roofs were dry, old and badly weathered by the searing sun. Occasionally they saw people on the steps of the huts, or inside through the open, unshuttered windows, or even washing themselves alongside or at the back of the huts. 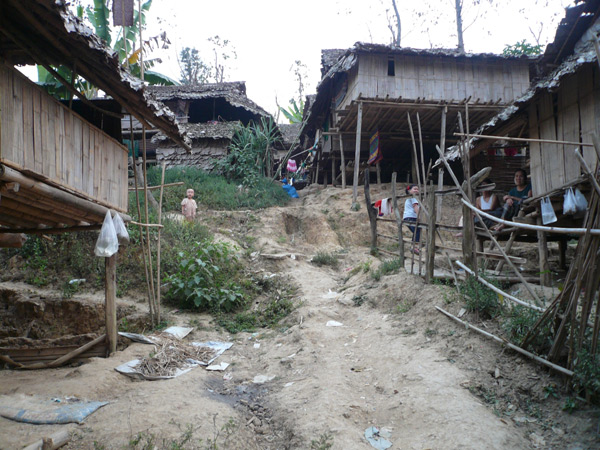 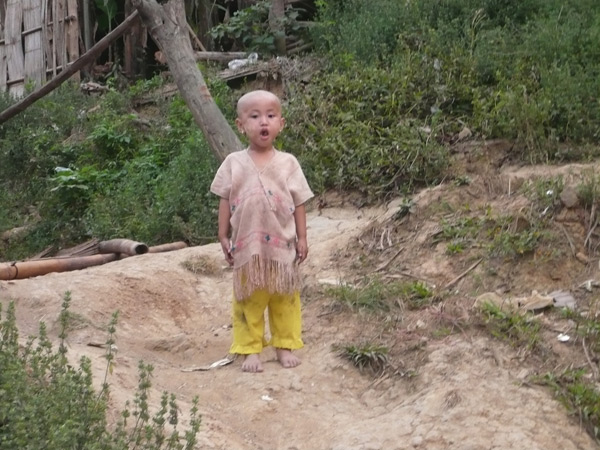 Typical kid. He looks about 3-4 but Thiri said he was 6 or 7, such is the malnourishment and under-development in the camp 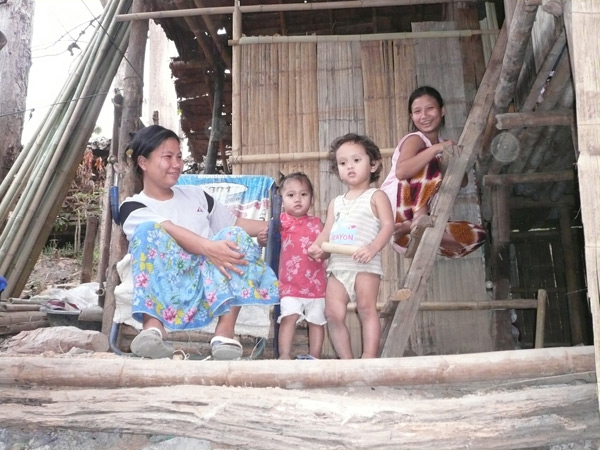 Young family on their front "porch". The smiles and laughter belie the crude conditions 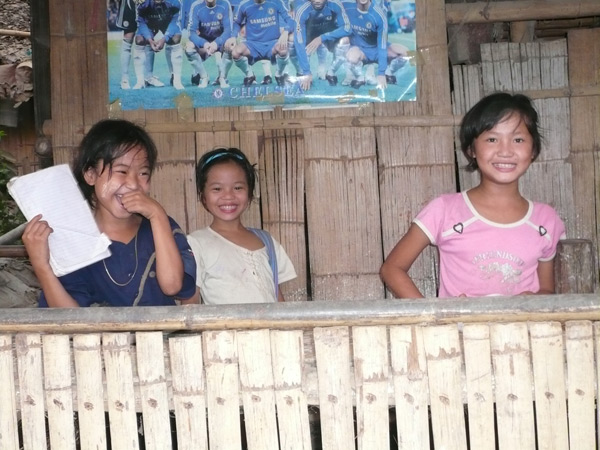 The beauty and insouciance of youth…and the Chelsea poster in the background. Many kids were kicking around everything from tin cans to empty coconuts. Everything except a real football!

A few minutes later they came into an open space at the junction of a number of broader paths, and at the far side were 2 larger single story buildings each with a perimeter veranda, but one of which was much more sturdily constructed, even with some cinder blocks at its base. This was a local office and meeting place and also where the sector headman stored the supplies provided by the UNHCR and various NGOs (Non Governmental Organizations), or rather, where he stashed the supplies of rice, charcoal and palm cooking oil that he had skimmed or stolen and that he used to provision his own clan as well as give rewards to his cronies and bribes for those he needed favors from.

As they took one of the broader paths out of the open area they passed by a space strewn with stacks of cut roof leaves, as well as an open hut where there were many tall stacks of similar leaves. They had been harvested from the neighboring jungle and once fully cured would be layered on top of existing roof leaves to add to the water proofing for the coming rainy season. 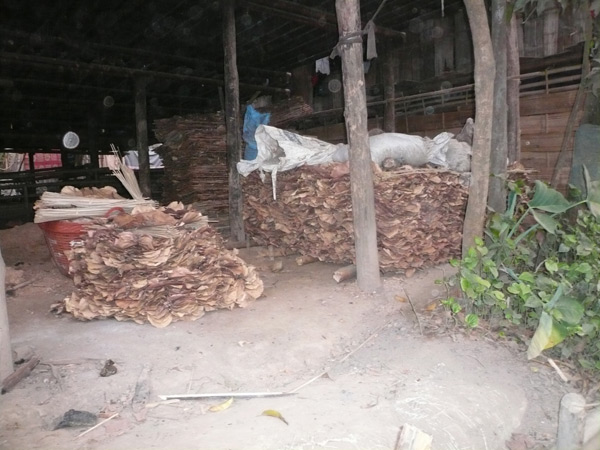 
About 100 meters later they came across a gathering of locals who were attentively listening to and occasionally clapping a man on an upturned packing crate who was addressing them in an animated and energetic manner. This was an open-air Baptist service and the man was delivering a sermon. There were a number of different Christian denominations in the camp: Catholic, Baptist, Methodist, etc as well as traditional Buddhists, and even some aboriginal animistic cult groups. Thiri said that many Christian converts came from Myanmar, but still more had been converted in the camps as this was a very good way to get support from the international religious charities both in the camp and also upon being resettled in a foreign country. 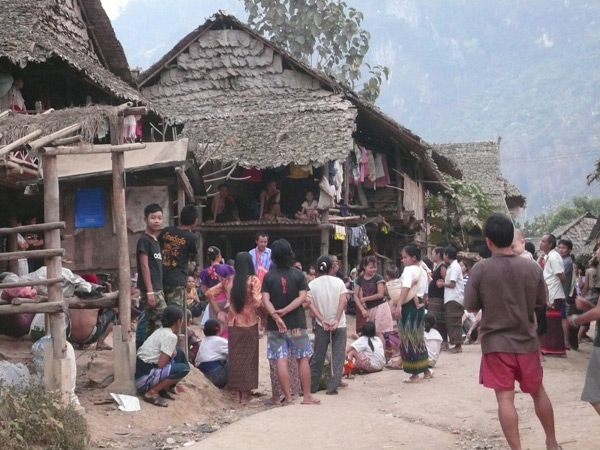 Small gathering of Baptists listening to their pastor giving a sermon


They spent the next 2 days in Bangkok together and he grew to appreciate her spirit, spunk and even her quirkiness. At times she seemed to be an idiot savant, with extraordinary musical and creative brilliance, and yet an inability to make simple choices, like what to wear, what to eat, what she liked or what she wanted (other than her resolute determination to be free). In this way she was like a petulant child who was so aggravating and yet so cute and charming you could only indulge her and you just could not scold her. So Steve realized that perhaps she was not the life-partner he was hoping for, but nonetheless he decided to have a good time and enjoy being with this remarkable woman, and seriously contemplated helping her buy her freedom. Certainly he was captivated by her trans-Atlantic sensibilities, such that she was just as at ease talking about marmite or peanut butter and jelly sandwiches, or cricket and baseball, or soccer and football, or tea and coffee, or Manchester United and the Raiders.

Eventually they came to her home where she lived with 3 friends from her general neighborhood in Yangon. It was the typical 2-level hut, with the ground level housing a partially open area, storage room, cooking space and toilet / wash area. There was a very steep step-ladder to the second floor, which had a landing and 2 rooms that were open on one side. The walls were woven of stranded bamboo and wood with many gaps that helped with the ventilation but not the privacy. Nor with the insulation during the cooler months or even the recent unseasonably cold times that Thiri had mentioned to him. He asked her about that now and also about how they coped. She said that they scrounged blankets from the NGOs, brought up smoldering charcoal in a metal bucket for heat and huddled together in a single sleeping chamber. Steve asked if they had thought about wind proofing the walls by weaving plastic shopping bags through the bamboo, but she did not seem to understand. So he showed her by taking an old Foodland plastic bag from his backpack and jamming a side under a bamboo slat, weaving it back though another and securing it under a lower slat. She shrugged and seemed quite unimpressed until one of her house-mates arrived and examined the arrangement. After an animated discussion she gave him a thumbs-up, while her house-mate gave a double thumbs-up.

Her house-mate had been an electrical engineer and a part-time university professor in Yangon and had developed a thriving business in the camp salvaging, fixing and re-selling electrical devices. In the back of the second sleeping chamber there was a crude bamboo and plywood desk on which was a fluorescent lamp and magnifying lamp and various tools, and next to which was a large padlocked box. He beckoned Steve to come with him as he moved to the desk and box, and then he fished out a key, unlocked the box and flung open the lid and announced: "Here is my treasure!" It was full of small trays and boxes brimming with neatly arranged mobile phones, handsets, headphones, transistor radios and other electrical and electronic components. It also contained a few larger devices such as a desktop computer, printer, older CRT monitor, hair dryer and what looked like a toaster. He pulled out a tray of mobile phones to show off the variety, although most were antiques by modern standards (but likely the type Stick still uses!) <And uses with pride! – Stick>, and to show Steve how he had assembled a functioning one from various models. He called it a MotoKia and another a NokiRola. Steve liked the fellow's wit and smarts and gave him a double thumbs-up in recognition. He erupted in laughter and reached over to give Steve a high-five, then yammered a few words to Thiri in Burmese before shutting and locking his treasure trove. 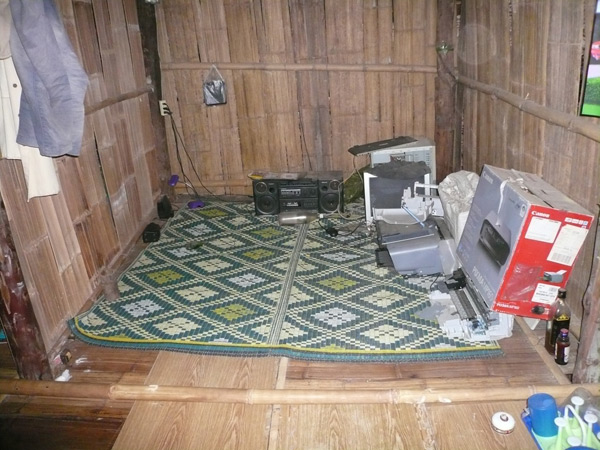 One of the 2 sleeping chambers on the second floor, with some of the electrical devices collected by the engineer 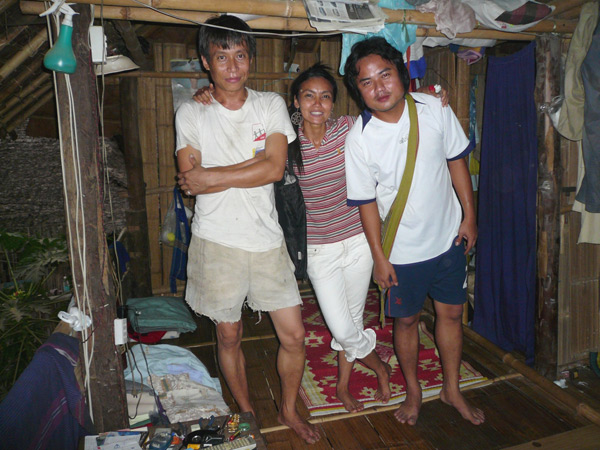 The engineer, Thiri and a neighbor in the second sleeping chamber. Note that there it's only enclosed on 2 sides and there is no front or door. Privacy is not a primary concern.

Truly fascinating to see the inside of one of these camps, but it pulls on your heart strings at the same time…