Urbanization of a Karen Part III

Three years ago I had a submission titled: Acculturation of a Karen into Modern Society. It was about a girl I met working on a construction crew building houses in our complex and how she had helped us in her spare time and worked her way into our hearts and we rewarded her with some very good pay (over 10,000 baht/month). A year later I wrote about the same person titled; Urbanization of a Karen Part II. That story ended very sadly with Lek leaving us to return “home” to take care of family as Dad did not approve of what she did. It was a sad time for many of us feeling so strongly about a girl who was really motivated to do good and work hard for people to earn her way.

It has been over two years now since her return from her stay with her family. She eventually realized what a good situation she had and returned to attempt to pick up the good life that she could never obtain back in the village. For a long time I have wanted to complete the story and tell how things have changed for Lek as she was able to once again work her way into our hearts and give us help when and where we wanted it. When she returned she had her tail between her legs, having to admit that she should not have left and asking if there was anything she could help us with. My wife was upset that she had left and did not want to hire her back. Most of our neighbors that had employed her took her back gradually and Lek began to earn back the respect and pay that she had previously enjoyed. Within two months my wife and I sold our house in the Hua Hin housing estate and moved to our condo in Bangkok while a new house was being constructed for us a very short distance away.

I always tried to keep abreast of how Lek was doing as she continued to work for homeowners in the housing estate. During these past two years she has managed to purchase a motorbike, get a toe cut off in a collision with something then more recently had a more serious collision with something which broke a part of her leg. All through these injuries she managed to keep working. I remember one time more recently seeing her hopping around with a crutch carrying out her “chores”. She always had a smile no matter how painful it must have been for her. She needed the income and that was more important to her.

Two weeks ago one of our neighbors asked my wife if she could clean their house before they arrived from Europe. Their house has more glass (large full length windows and sliding glass doors) than any other home in our complex and my wife was having difficulty just sweeping, dusting, cleaning and mopping the floors and patios. My wife finally relented and called Lek to help. 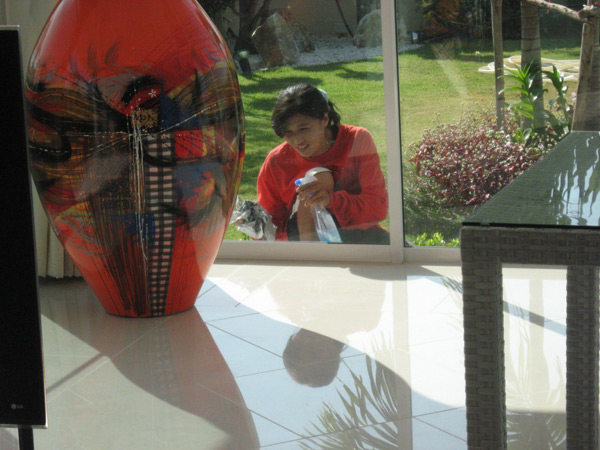 Lek initially said she could not come until 4pm but showed up at 2pm with the newspapers necessary to clean all the windows in the house both inside and out. This girl never quits and she knows what work is. I do enjoy watching her because she is all business and works very hard with absolutely no playing around. If that doesn’t sound very un-Thai like I don’t know what does. 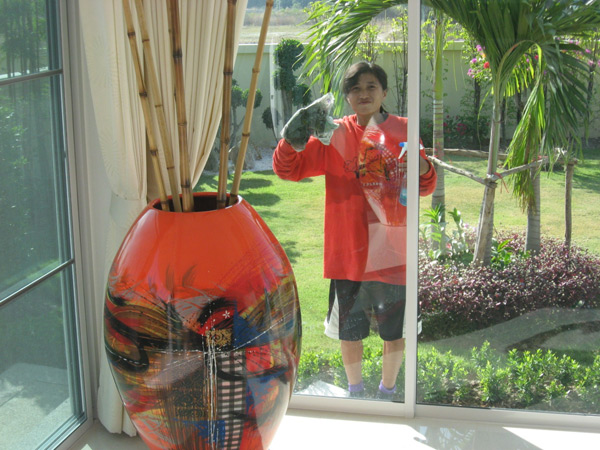 In the past two years she has really matured physically and no longer looks like a small child but more mature women that she now is. My wife learned that she has now brought her mother, brother and others to live with her so she can take care of and look after them. Knowing from her actions in the past she is probably supporting all of them. Good to also learn that she has a descent place to live now. When I first met her she was living in a corrugated metal temporary construction worker dirt floored shack.

She still has a limp from her last collision on the bike and I suspect that she may be stuck with that permanently having no extra money for her own proper health care. Later in the day her mother called her to express her concern because she was going to work into the night to complete the work. Their concern was because the last “accident” she was in happened at night on the motorbike. Driving at night on the motorbike around our area is like driving through a mine field with all the craters in the roads and lingering soi dogs to jump out at you when you least expect it as your trying to avoid the next upcoming crater.

She is not a citizen of Thailand but, we think, from Myanmar but she has shown others papers that she has legal status in Thailand. There are a lot of Leks out there that work under the radar doing the work Thais don’t want to do. I know in our current housing complex if we had one or two Leks around they could fire all the other Thais and we would not be having the problems were now having getting the Thai workers to do their job. The problem is that Lek is making so much more than the Thai gardeners in our complex because she is appreciated by her employers and correspondingly rewarded well for her work. There simply aren’t may workers around like her from my experience. 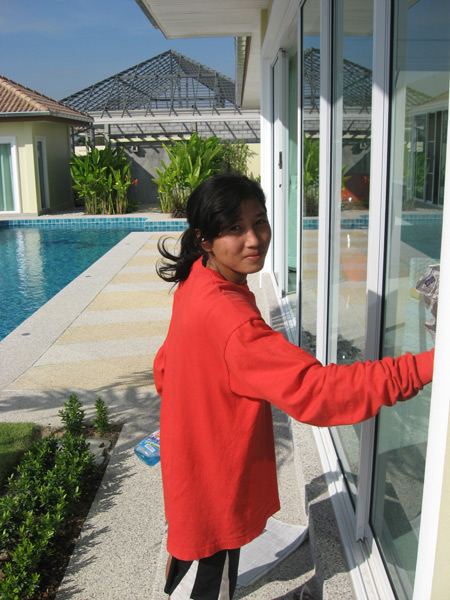 Here is a closer up picture of a hard working Lek who has come so far because of her tremendous work ethic. It is truly heartwarming to have watched her “grow” over the past three plus years. Hopefully she will continue to be rewarded because of the hard working, no nonsense attitude and work ethic that she has. I feel much better finally updating this story on the upside that it has been for the past two years.

Nice story, but I do hope that Lek is able to somehow move into something more financially rewarding and is not destined to a life of low-paying labour intensive work all her life.