Pattaya, How It Seems After 7 Years

The town seems to incite a variety of reactions like nowhere else does. Having spent the first two years in Phuket, I was looking to make a change and returned to the first city I had visited in Thailand, Pattaya. My first take back in 2002 was that this is the one place the world's ugliest men could have a good time that is always unavailable to them back home. Patong seemed like a classier place.

in 2005 though, it looked a bit more attractive after the heat and anger in southern Thailand, so I tried Pattaya again. In Patong, I knew several older Farangs around the bar business who died mysteriously back in 2004 and that coupled with the not so hidden anger of the Thais and a bar area too small to find some anonymity seemed to indicate Pattaya might not be so bad. 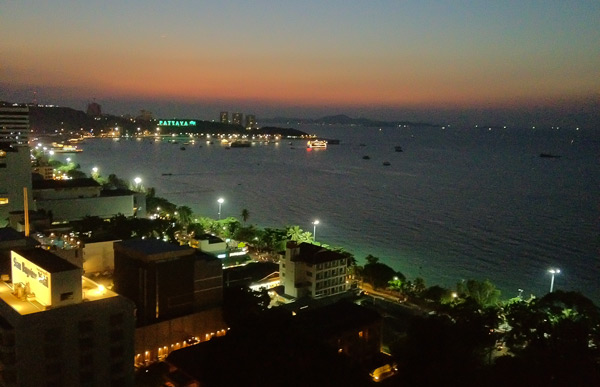 What was I looking for? I think a similar notion to most westerners. We like the beauty of these people, want to laugh where laughter seems frequent and acceptable, and like attractive women which are entirely unavailable to most westerners past 40. The choices are if retired in one's mid 50s to stay home and be lonely and only passionate about politics, or come on over and enjoy frequent human interactions even if sex is not the main part. Here in Pattaya you can find whatever you like and to pretty much whatever intensity you seek. My early years in Pattaya forced me to grow up as it truly can be the big leagues in a lot of ways, some quite dangerous. The things that happened to me are not things I would normally believe if someone related them to me now. To protect myself by omitting details, I will just say I have been threatened in a variety of ways and met some truly ruthless people. Now, I feel as if I have survived some things others may not have been so lucky to have gotten through and I seem to have developed some sort of unconscious screening process that protects me from the greedy and weird. In other words, my days and nights are quite enjoyable in my mid 60's and in the place of such notoriety, perhaps because the daytime is when I am most active.

To be healthy, it requires an occasional honest inventory. We can easily find any sort of excess we want here. If we are past 60 and having sex everyday, we are ingesting something that may give us a heart attack. Over the years, I have been told twice by young ladies of the night that they had had customers die of too much Viagra and cardiac arrest. Like anything, moderation makes more sense to me now. Anything that feels good has the potential for addiction, and you can act out on that stuff around here and not be isolated. We are compelled if we want a pleasant life, to find balance in pretty much all things.

After a few years, the practical things come more into play and Pattaya can offer the medical help you need in a place where English is often spoken. Being an hour and a half from Bangkok has always been valuable to me and I can see that megaopolis and all its variety quite easily from here. As one who cares about their respiration, I could not live in Bangkok, having had TB and pneumonia earlier in life. Spending three days in Bangkok seems to make me sick. I like that town, but have to face the reality of its air pollution. For 113 baht one is in the Ekamai bus station within a short walk of the elevated BTS, nice and smooth. Really a great city to see.

Some tell tales of going broke here and I have to wonder why they didn't just pay attention to what was happening. I have lived beneath my means the entire time and am not rich, though certainly not poor. A non drinking man like me who owns his own high rise condo can live here quite comfortably on 80,000 baht per month. It is just not all that expensive. People say the Philippines are easier to get along in and I do spend some time in a place I have over there, but when I get back to Thailand I feel as if I have come forward in time and safety enough to just stay here most of the time.

Those I have seen unable to remain because of finances are those who forgot this thing with the ladies is THE GAME and it is played everywhere, but better here than most I have seen. A few years back I watched a fellow at the gym rave about his girlfriend being so fabulous, I wondered what he was thinking as she was tatted to the max with that weird blond colored hair they sometimes dye and obvious silicon enhancements. He bragged about how he was keeping her for 40,000 a month (in 2006!) So he was renting a nice place and happy, then decided to marry her. After marriage he felt she could take 30,000 per month instead (I wonder if these ladies report their earning to the tax man?) and was surprised to find all his clothing cut up with scissors when he returned from his daily bragging session in the gym. That night he claimed to have gotten a phone call from America on family issues and his immediate return was required. No one has seen him since. Prostitutes, though some are still so surprisingly kind, can be pretty viscous regarding what they see as pay cuts while perhaps the farang may see it different, I guess the lady has a point.

If we keep it real we can really enjoy this myriad of opportunities for fun and relaxation in Pattaya. Seems to me like one doesn't appreciate this town until they have lived here for some time. Of course, one needs to make their own living environment nice to enhance this experience. This is to any man who may be considering here and has read all the "opinions" about the town. It is user friendly for us and does it really matter what younger men on vacations think or say about old men having fun? The trick is to actually become an old man and not be broke. Some of the young guys who come here may not be able to afford it when they are old and ugly and still want a good time? But, if they did get it together enough further down the road, maybe they wouldn't appreciate younger people telling them they don't deserve to enjoy their old age?

I do hope this helps some guys decide to give it a try. Thais are really a lot of fun and have terrific food. Pattaya is comfortable for me and thousands of other expats. When somebody finds something better, I would like to see it.

Many words of wisdom here!

Christmas: What A Difference A Year Makes