Actually Thailand disgraced itself, Japan just made it more obvious. It’s not the first time. Most who have visited or lived in Thailand will tell you they do it over and over again. Countless coups. Political protests burning down shopping malls, shutting down airports, killing foreign journalists, and even shooting a popular general in the head. Victor Bout a convicted international arms dealer was arranged to go free at the highest levels instead of being extradited to their most loyal western ally the United States, thwarted only because the United States discovered embarrassing instances of corruption in the most unexpected places. Economic refugees turned back to sea with no food, water or means of propulsion which could only mean certain death for those onboard.

Most recently the Supreme Court upheld a 3-month suspended sentence and 55 hours of ‘community service’ for a university professor convicted of beating his wife to death! They called this wife beating “a crime of passion.”

Of course the professor who beat his wife to death isn’t a danger to others, in fact part of their justification for his suspended sentence is because his young children need him. He killed their mother in a supposed fit of rage, yet they say the kids are safe. Hell, the Supreme Court even stated the kids need him. You’d think they need their mother too, but she’s dead. He killed her. 3 months suspended, 55 hours of community service. Fair punishment for taking the life of a mother of three children? An elite rich urbanite. 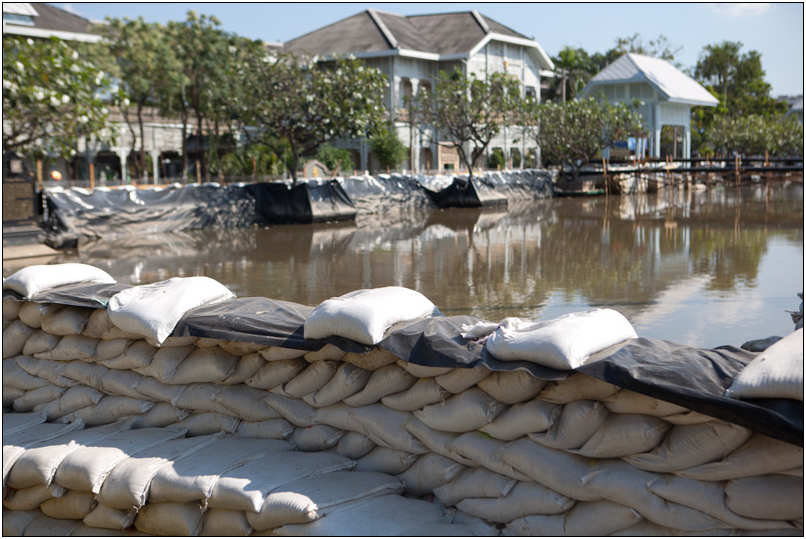 I could go on and fill volumes with such examples and maybe it would make a better musing if I did, but I’m sure if you have more than a passing knowledge of Thailand you can fill your own volumes. What I really want to talk about is the recent floods.

First, an observation: I’ve lived 23+ years in Asia, with big chunks of this time spent in Japan, Korea and Thailand. Something I’ve noticed in the Asian races is an overwhelming need to feel superior to other Asian races. The Japanese feel superior to the Koreans, the Koreans to the Chinese, Filipinos to the Thais, the Thais to the Cambodians. The list is long, and mostly circular. Is there really a winner? Today I’m going to declare Japan the winner. Why?

During the last year Japan has suffered massive earthquakes which brought on devastating tsunamis and the worst nuclear accident since Chernobyl. A 1-2-3 series of knockout punches that would have had any country down for the count. I’ve read perhaps thousands of articles about this subject, how it happened, why it happened, who was responsible, and how the Japanese reacted. Having friends still living on Honshu I received a running commentary on how it affected the locals and how they reacted.

If you’ve ever felt overwhelmingly proud of the human race this would have to be one of those times. The nuclear workers who could keep the cores from meltdown stayed at their posts despite knowing they were receiving lethal doses of radiation. Why? Because it was their duty, and Japan was their country.

Many of the key executives responsible for these reactors took personal responsibility either through resigning, or regrettably by a symbolic ‘seppuku’ suicide. Their PM volunteered to resign but both his party and the opposition asked him to stay on because they needed him guiding their country through bad times, a change of leadership during a time of crisis would hurt their country.

But most telling were the long lines for food and shelter. With the weather dangerously cold and a crippled government response, Japanese citizens went without food, water, and shelter for weeks and then months. But as you watched the video footage of these lines you might have been surprised by what you didn’t see.

You didn’t see fighting, pushing, or disorderly conduct of any type. You didn’t hear about looting, racketeering, or other forms of profiteering from these disasters. What you saw was a nation pulling together from their grass roots and leaning on each other.

Stories began to surface of young children given food, while hungry from not eating for days themselves, looked for the elderly next in line to give their portions to.. before getting back in line themselves. Still hungry, still cold, but nourished and warm from their acts of generosity and love of country.

Watching the Japanese brought tears to my eyes, you don’t get many chances in life to witness such unwashed giving, patriotism, and self-pride. From children. I couldn’t help to think back to my country’s most recent large scale disaster. Hurricane Katrina. Like Japan much good was done. Unlike Japan there was some looting, robbing, and profiteering. Not on a large scale, but enough to tarnish the pride I normally feel for my country.

Over the last month in Thailand we’ve seen unprecedented flooding. Not a tsunami, but a predicted almost gentle flooding of wide swathes of land starting from the north and working its way down through Bangkok to the nearest oceanic outlets. The process took weeks, like watching a slow motion train wreck in process. In more than one way. We’ve all watched train wrecks about to happen, knew what needed to be done to minimize the disaster, but our hands were tied and we were powerless to intervene. The flooding in Thailand was this way. 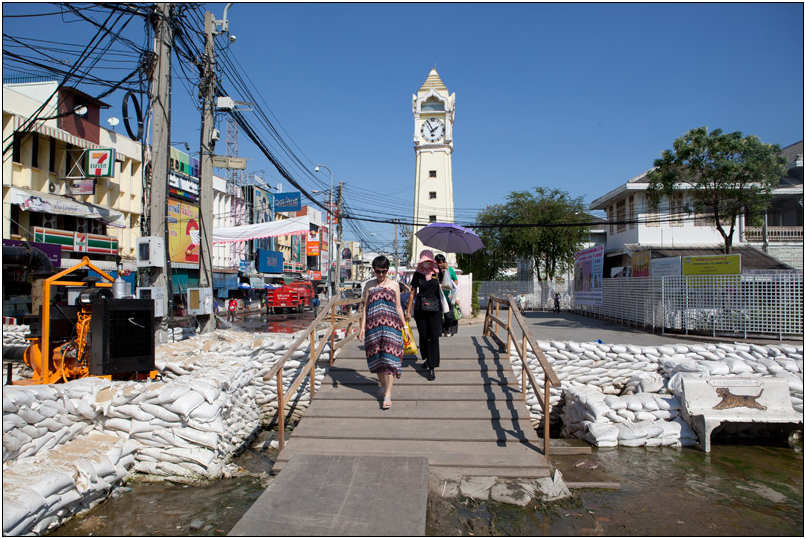 Instead of coordinated swift actions we witnessed bickering politicians trying to place blame weeks ahead of the actual flooding. Instead of accepting responsibility we saw selfish power plays and a complete lack professional integrity from all sides. One infamous politician allegedly seized two motor boats donated for flood relief efforts. There was no centralized voice, no one the Thai citizens could turn to for reliable accurate information.

Instead, each television channel had some self-important politician giving their personal take on what was happening and what should be done about it. It didn’t take long to realize not one of these charlatans had a clue. It was more important for them to ‘one-up’ their opposition or even save face, than it was to provide timely and accurate information in the face of dangerous flooding which so far has claimed the lives of 500+ Thai citizens. 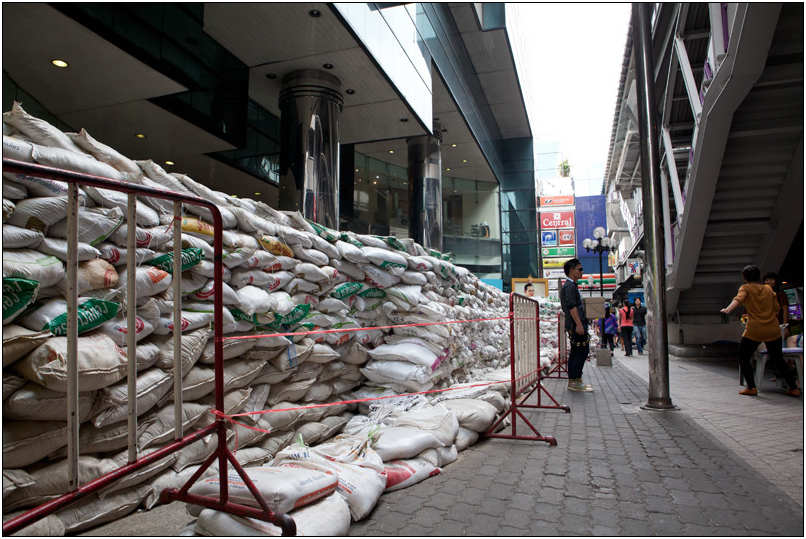 You can almost forgive politicians, I’d guess someday we’ll learn most are genetically flawed and predisposed to serve their own interests before the interests of those they’re sworn to serve. What really set me back were the not insignificant number of Thai citizens who were either finding ways to profit from the flood victims, their fellow citizens, or who couldn’t resist bickering like school children.

I can’t remember all the reports which came my way, but it became obvious Thai citizens wouldn’t be emulating their Japanese neighbors. On a rather large scale Thais were looking out for number one, themselves. “Sea Lions” (Thai term) stealing from other flood victims, sporadic looting you could almost forgive, profiteering from necessities you’d regrettably expect as drinking water and instant noodles and emergency building materials skyrocketed. 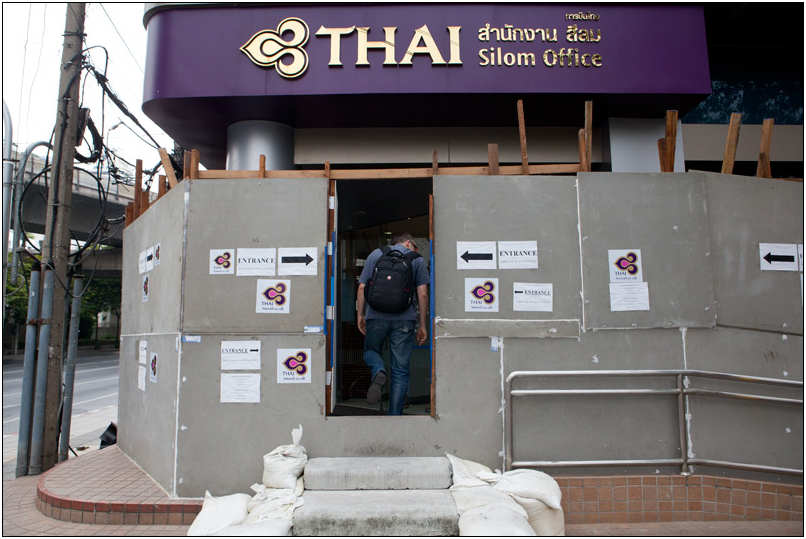 It probably didn’t surprise anyone when Thai automobile owners started parking their cars on flyovers, expressways, and anywhere they could find so their personal car might escape damage. These people didn’t care if they were blocking the roadways to emergency vehicles or causing accidents, saving their car was a higher priority.

Then there were the gangs with boats charging exorbitant fees so residents of certain areas could make it home, or to work the next day. This wasn’t bad enough, but when Army trucks came their way to help provide safe transportation the gangs threw nails and other obstacles beneath the water to puncture the tires and keep the Army trucks at bay so they could continue making profiting from their neighbors misfortune.

It was remarkable watching a distrustful populace actually interfere with flood relief efforts because they thought certain efforts were designed to hurt them so others could benefit. This is one of the serious issues with a society who thinks corruption in government is “okay”, in times of emergency when you really need the cooperation and trust of the public, you not only don’t have their trust, but you can’t have their cooperation either. So much so that fighting, shootings, and demonstrations were everyday occurrences at the sandbag and other diversion sites. Where did ordinary citizens get the dynamite used to blow up the sandbag dikes?

While the vast majority of Thai people were suffering from losing their homes and jobs to the most severe flooding in decades, a not insignificant number of Thais were actively seeking a way to personally benefit from their misery. Corruption is so common these illegal and selfish acts are taken in stride, as expected and almost entitled actions. 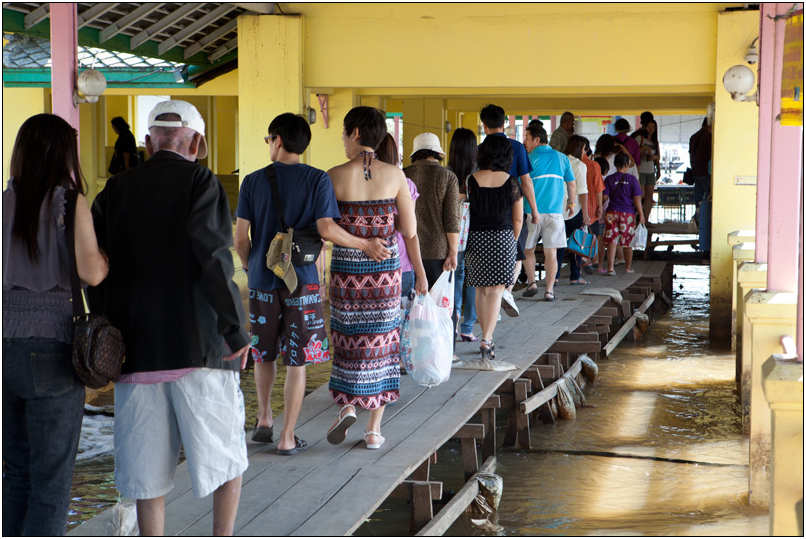 It’s not unfamiliar to my ears to hear new expats or observant tourists compare Thais to school age children. Their inability to come together to solve problems, their propensity to let their tempers flare from losing face, their constant bickering and unreasonableness. The more you watch, the more comparisons you notice. These traits are the result of a culture which refuses to mature, a people unable to look outside their own fence and learn from others. But it’s not all bad.

From my years in Thailand, I know the ordinary Thai to be as generous, honest, giving, and patriotic as any people I’ve known. I can tell you story after story how a Thai befriended or helped me in a time of need.

These good Thai people are still with us, they most likely are suffering in silence and helping their neighbors while the corrupted citizens look after themselves. When you have a society so deeply entrenched in corruption that the majority of citizens accept this corruption as normal and “okay”, you have a broken country. You have those who do wrong, and those who feel powerless to effect change. They’ll even go so far as to make excuses for those who wrong them in their embarrassment for their country.

This is an easy win for Japan. 2011 was a terrifically bad year for both Japan and Thailand. Yet, Japan handled their crisis with a discipline born of courage and love of country, while Thailand handles theirs like spoiled children. In this specific comparison Japan is “ichiban” (number one), way ahead of Thailand in every important way. I admire Japan, I’m saddened for Thailand.

Many, many Thais are very upset at the way the flooding was managed. It's going to take much longer for these feelings to fade than it is for the flood waters to recede.

My Take On The Phils