So there I was ready to say sorry to God while I prepared to say sorry to those I have offended. Now, on reflection there are at least two ways of saying sorry. Reconciliation, as we all know, is as old as humanity but when it comes to repentance it is an increasingly unknown feeling and forgiveness of course requires the same honest effort by two people. The perpetrator (me on this occasion) requires a degree of contrition while the victim needs to let go of animosity and revenge. I know what you are thinking; what are you blubbering about, old Tommaso? Where are you going with this?

Well, I realised, only too late that in my previous and first submission, I was so eager to reveal the future of Nana Plaza that I addressed all readers as “Brothers” and I completely and quite unforgivably omitted to include our lovely “Sisters” too. Now before the whole affair of being fully inclusive becomes as officious and efficient as an Indian immigration officer checking your passport at a Pakistan – India border crossing, let me add that if there are any individuals who are either not sure of their gender or who are in a transitional process of cross gender or who have already successfully completed their reassignment, please be graceful enough to accept and recognise yourself under one title or the other and rest assured that I love you all until you prove yourself unworthy of my respect that is. Therefore, without further ado, let’s put matters straight right now by saying what I should have said previously “A warm welcome to all Brothers and Sisters!”

There, I have done it! Finally, I can cast aside the burden of this little affliction, which has plagued me for over a week now living in fear that I may receive the dreaded “Dear Mr Tommaso” letter signed by none other than readers’ submissions writer of the week “Farang Girl”…phew…my hair raises uncontrollably at the back of my neck at the mere thought of what could have happened and I am relieved while finding myself thanking my lucky star for that escape but Brothers! No more slips from now one because our highly esteemed Sisters, as proof has it, are equally intelligent (in a number cases seemingly more intelligent) and very articulate; although when she writes “it’s impossible to find a man here.. 5555”…is that a civic number in High Sukhumvit Road? Of course not, even a ten year old kid could have worked out that the reason why she is finding impossible to find a man In Thailand is because, poor soul, some scoundrel has given her an incomplete number… but wait, was it Brother Heineken himself that supplied that number? Hmm surely not because according to her description of him that would have been 666 666 666. Please could a kind Brother help her with the missing digits? Let’s all quickly check our phone books in our mobiles for numbers beginning or ending 5555. And, by the way, is she being serious about Spasso being a known freelance pick up joint? Is this the basement restaurant in a very fine hotel, just a stone throw away from the Erawan’s shrine? Oh my God, what will Buddha be thinking? I was there only a couple of weeks ago and did not notice any of these shenanigans, then again I was out of there by ten. Mind you I should have guessed that with a name like “Spasso”, Italian for “FUN”, something deeper may have been implied. Oh well, live and learn as the saying goes.

Ah, saying sorry…that is what I started with today and in my view, this must rank as one of the highest tests of human freedom. It is also one of the greatest gifts we have brought to our imagination as human beings. Just visualise for a moment if during these occasional ongoing conflicts between Farang and Thais, which are with some regularity talked about on this very popular site in a style reminiscent of these stand up strikes along with various clinching techniques answering to the name of Muay Thai, just imagine, if you will, if both sides could stop their fighting for a moment and acknowledge and realise the pain they cause one another with their derogatory and gratuitous remarks. Imagine for a moment what would happen if each side instead of lashing out and saying “It was your fault” if they could honestly and sincerely try to tolerate and face one another. Is it improbable? I would say that as things stand at present the answer may be a “Yes” but if you asked me if it was impossible, I would probably say “No”. However, it must be a human trait because it is often found in several little passages of intolerance as displayed recently by Brother Titus when he writes

“ For myself, my life in Thailand only got better when I ceased kowtowking to Thais”

What on earth does “kowtowking” mean by the way? And if it was just an unfortunate spelling mistake, what could our Brother possibly have meant when he added

“ Its pretty obvious why this should be so”

Ugh! Did he not take the heed of the gentle advice dispensed by another anonymous brother when he recently wrote
“ I think one of the first things I tell newcomers I meet is "smile, laugh, don't get angry". Basically play the clown and don't be too proud to apologize, indeed even when you are in the right”

It makes one wonder if Brother Titus, seeks to fulfil his Thai experience by accomplishing feats of military proportions, albeit in different shores, like his illustrious namesake Roman emperor, also known as Augustus, by becoming a renowned commander over here and then sodomise the Thai subjects to submissions but not of the readers kind. Or is he simply looking for trouble and perhaps relishes a little confrontation? Now God forbid, if our Brother Titus happened to also have a sweet and gentle teeruk close to his heart while residing in the kingdom, would that come across as a little controversial? And what about his gratuitous attacks on Ajhan Stick, which caused the Gran Maestro having to write more than a couple of lines at the end of that submission? Something very rare and an honour usually reserved for those green stars concealing the everlasting kryptonite power.

Sure, I agree with what you may be thinking, it is tough to say sorry. I agree that it is certainly one of the morally highest challenges nowadays. But if we were able to say sorry and mean it, this may be the start enabling us to lose the chains from the past and heal our wounds together, would it not? Therefore, Brothers and Sisters, look around and if you see Brother Titus, please, I urge you to stretch your hand in forgiveness and buy him a beer, actually buy him several in the hope that he may come to his senses and realise that living in the Kingdom is not a God given right but, as guest, a privilege.

Of course I hear you say, what about freedom of expression? I agree, an absolute and fundamental right we must protect but my dear Brothers and Sisters, let’s use freedom of expression judiciously by corroborating our statements with references because unless we have the evidence, our generalist statements may amount to little more than ramblings and they may come across to some as unjustified and disrespectful comments. Unless your name is Brother Dana in which case you are allowed to say anything that enters your mind with no questions asked!

In light of this and if you allow me to say so, I have noticed that since Ajhan Stick launched his brief appeal for more submissions, he seems to have awaken a desire among Brothers and Sisters to share some absolutely delightful and candid experiences, which in some passages reveal both nostalgia and hope for a tranquil future, a desire to get along well with others irrespective of race, creed or gender and without necessarily giving up one’s dignity and their touching tales have also included some photos. I read that Brother K by the way has now crossed the Nepalese border possibly on his way to Bhutan and then Bangladesh so we await with eagerness a 352 part report inclusive of photos from each of these countries.

Some of the Brothers, like the popular Caveman, have even taken the trouble to provide specific advice with up to date price lists and modus operandi, which was light hearted and entertaining and we all look forward to his definitive guide to Massage Parlours. Why not?

However, it is with an excerpt from the four part story of Farang Dave that I wish to conclude my thoughts on this occasion and it is perhaps quite fitting when he writes

“ How did I fare with the "Thai way" on this trip?… This time, the members of my Thai groups knew me much better and seemed more willing to consider my feelings than before. Some of our destinations were for me, some for them, just as it should have been. As a consequence, I think we all had a good time and learned new things together. I guess the secret is to be careful what groups you hang with before trying to fit in. Do I sound like my mother? Anyway, I no longer fear the "Thai way" or the day when I will set foot in Thailand as its newest resident.”

To me that comes across as the thoughtful views of a Brother who is not oblivious to the environment he is in while at the same time adopting a wiser and open minded approach in being prepared to give it a try. If we keep seeing the enemy at every corner, perhaps we should consider taking a good look at ourselves and reflect if the real enemy is actually within us, festering in our heads and eating our hearts.

To that end, and following recent good examples I have included a few snapshots of my Thai travels. The first person to email Stick with the correct answers of the exact location, date and time where all these photos were taken wins a 500 baht credit at Oh My Cod, the fish and chips restaurant. The second person with the correct answers wins a 500 baht voucher from one of the best farang food venues in Bangkok, and the home of Bangkok's best burger. There is also a special complimentary glass of chilled Pinot Grigio awaiting at Spasso after eleven o’clock at night, courtesy of Stick again, for that very lucky reader who is able to name all monks in one of the photos (full names and surnames of the monks please not just their nicknames)
Stay safe Brothers and Sisters and enjoy what life throws at you gracefully. 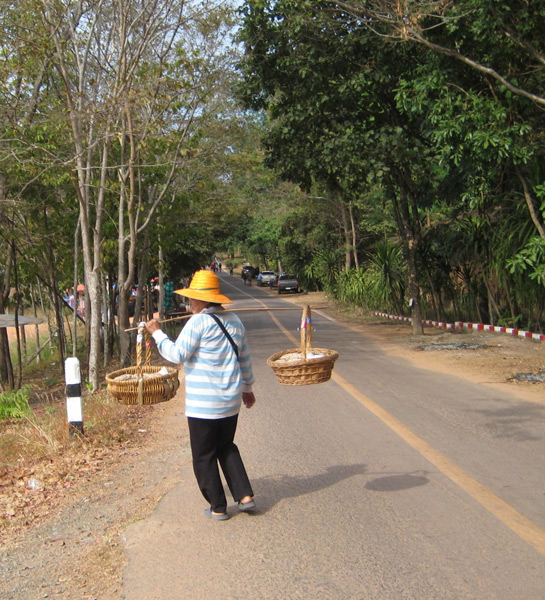 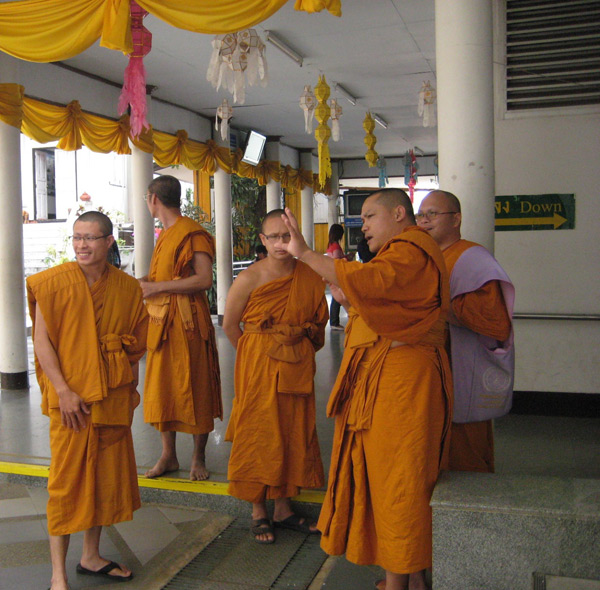 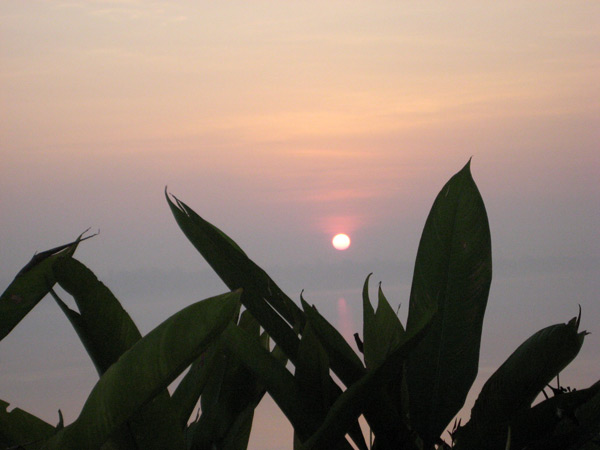 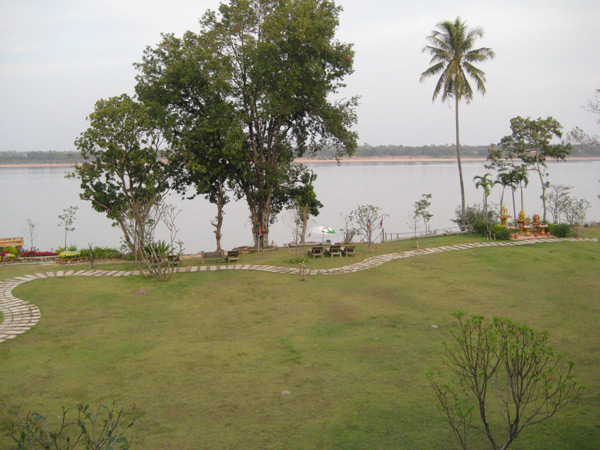 I do believe "Brother Tommaso" would be the appropriate person to send entries on the photos too, but alas, I read this submission before any of you lot and I already claimed the prizes.

Another Agency Tale – Meeting The Family

My Time In Thailand