Faces of Iran – Meet Ali in Shiraz and Omid in Tehran

“Haha! You are wearing a black polo shirt! Are you mourning Imam Khomeini?” Ali teases me.

One of the unexpected pleasures of staying with Ali in Shiraz is that he has a sit-down toilet. It’s the first I have seen in a private home in Iran. His apartment is the most modern I’ve stayed in during my time in the country as well. Proudly he shows me his 42’ flat screen HD television with more than 250 international channels, and his brand-new Nikon DSLR.

Meeting Ali’s wife for the first time I extend my hand to her, which she shakes clearly reluctantly.

“My wife doesn’t like shaking hands with men”, Ali later tells me apologetically. “It’s not something many women are used to doing here.”

Ali takes me to Persepolis and other interesting places in and around Shiraz. Like most Iranians I have met he insists on paying for all expenses, including my entrance fees and meals. To Ali this is his obligation as a host, and there’s no way of talking him out of doing this. 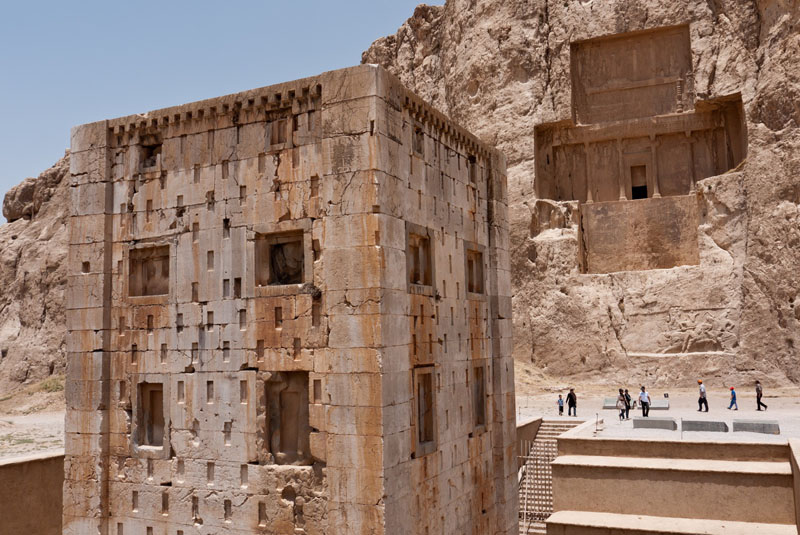 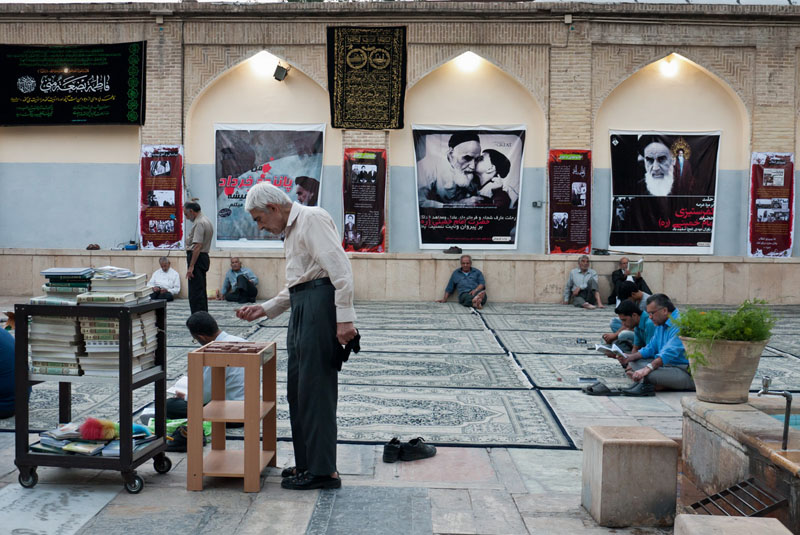 On my second night staying with him and his wife Ali takes me to the main mosque in town. Thousands of people have gathered to openly lament the death of Imam Khomeini 22 years ago. It appears I am the only foreigner in the entire complex.

Walking around the courtyard of the mosque Ali suddenly points out an old Mullah with a long white beard. “Look, Bin Laden!” Ali laughs out loud. “Oh no! Bin Laden already dead!”

Back in Ali’s home we enjoy a nice halal lasagna together for dinner.

“Is Khomeini’s picture on all Iranian banknotes?” I ask Ali.

“Iran IS Khomeini! I think of him as a kind of revolutionary, almost like Che Guevara, or maybe like one of the African revolutionaries!” he replies.

Omid takes me out for sightseeing in Tehran. Our first destination is recently completed 435-meter-tall Milad Tower. It bears a striking resemblance to Toronto’s CN Tower, with the advantage of having an open-air observation deck.

Omid drives a Saipa Saba, which is actually an Iranian produced mid-80ies Kia Pride model. Together with also locally produced Peugeots 206 the Saipas are probably the most widely driven cars in Iran today. Saipas are more functional than comfortable, but most importantly they are affordable.

Driving in Iran, and especially in Tehran, is an adventure. On a per capita basis Iran has one of the highest numbers of traffic casualties in the world. Before my arrival to the country a friend who has spent several months in Iran during recent years told me: “When you cross the street always make sure you have at least one Iranian between you and the traffic.” I’ve found this to be very sensible advice.

Being distracted by our conversation Omid misses the right exit off the city highway.

“Shame on me!” Omid shouts and jerks the car to a halt on the emergency lane. He then backs up 100 meters against the stream of traffic to get back to the exit ramp.

“People enjoy driving like this! Yes, people die, but at least they are having fun!” Omid comments my nervous expression.

With Wham’s “Last Christmas” blaring from the car’s stereo we approach Milad Tower. It’s an unusually clear day, and the views from open-air observation deck of the tower are mind-blowing. 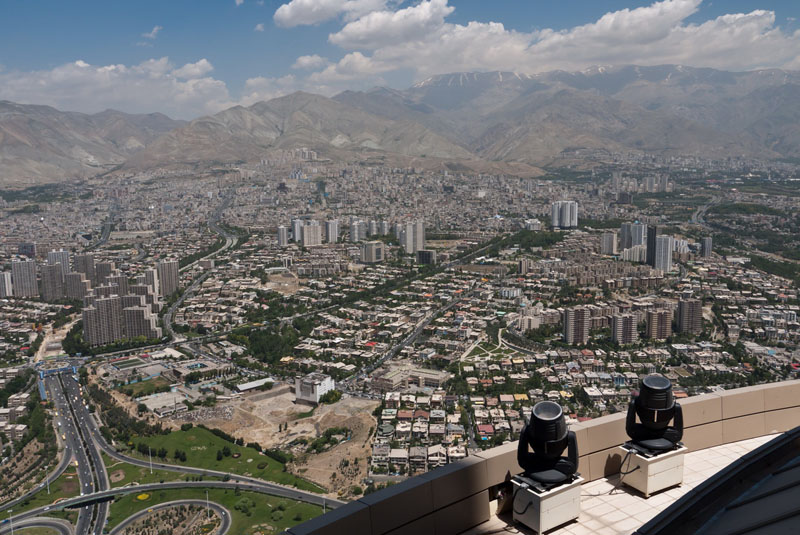 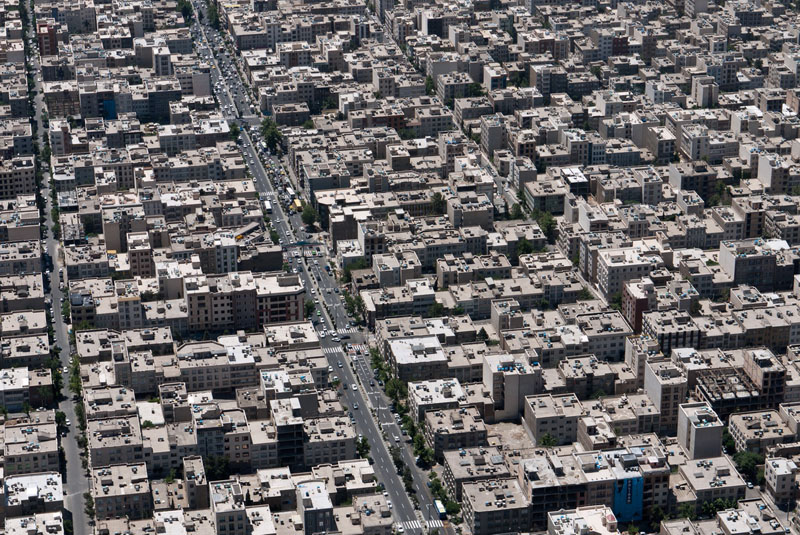 After visiting the tower we head to Darband, a narrow valley located at the foothills of the mighty Alborz Mountains at the northern edge of Tehran. Racing up the streets to Darband we overtake a late model BMW convertible driven by some fashionable young girls.

“Let’s show them how we are proud of our Kia Pride!” Omid’s voice resonates over the sound of his car’s screeching tires.

Today is Thursday, the first day of the weekend, and Darband bustles with day tripping Tehranis in holiday mode. It’s a beautiful place full of sophisticated looking, well dressed people. People are eating corndogs and riding Segways around. Pretty girls wearing tight overcoats are showing lots of hair. Many present their freshly done nose jobs by showing off distinct band-aids on their noses. Tehran is the nose job capital of the world. Nowhere else more people are getting their noses done than in this city. Maple trees line the streets, and there’s still snow high above on top of the mountains in late May. This place almost looks and feels like a recreational area in the central European Alps, not Iran.

Omid takes me to Sa’d Abad Palace which used to be a royal summer home. It’s set on more than 100 hectares of spectacular mountainside parkland. Outside one of the compound’s many museums I notice a group of Asian visitors. Taking a closer look I recognize the distinct Kim-Il Sung pins North Koreans are obligated to wear on their chests.

“They are here to help building the nuclear missiles!” Omid remarks casually before focusing his attention on a couple of pretty girls nearby. 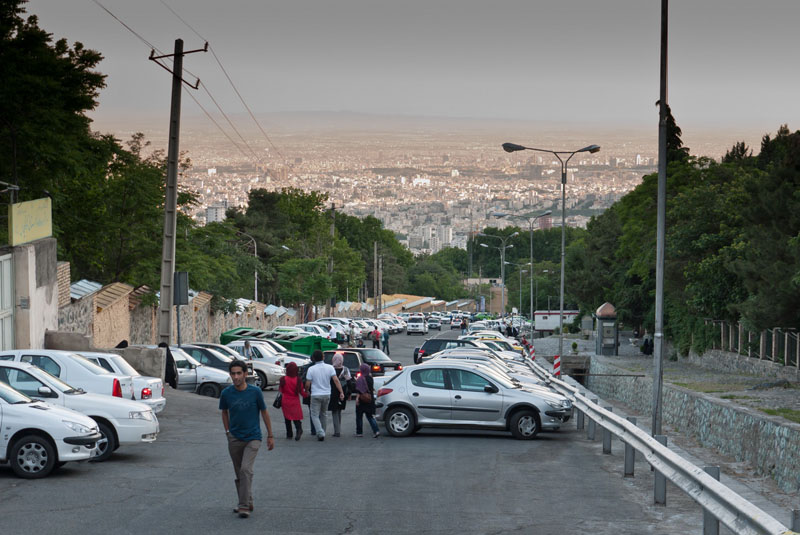 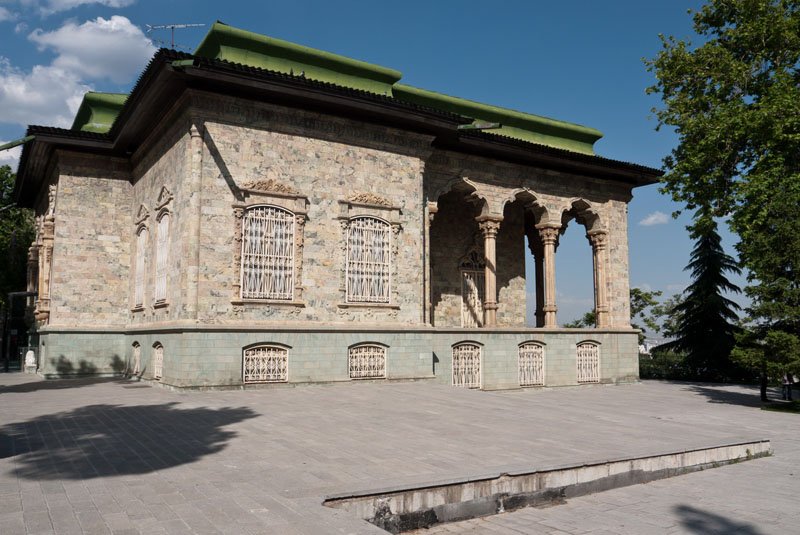 The following day Omid takes me along on a day trip to a mountain range a couple of hours north of Tehran. Some of his friends, a mixed group of guys and girls aged between 22 and 38, join us.

Driving out of Tehran we pass countless buildings whose facades are adorned with large propaganda murals. The images of the leader of the Islamic revolution, Iman Khomeini, and present Supreme Leader Omid Khamenei are omnipresent, as well as theatrical depictions of the martyrs of the Iran-Iraq war. There are billboards showing little boys carrying Kalashnikovs, with the Supreme Leader benevolently smiling down at them.

Eventually we leave the highway and follow a meandering road to the top of a mountain pass. The views are stupendous. Down in the valley we find ourselves a nice spot near a large lake and enjoy a nice picnic of fresh Barbari bread, goat cheese, walnuts, cream cheese and jam. As the foreign guest I am always offered the first morsel of everything.

A family of Kurds who have set up camp nearby offers us some liver kebab freshly roasted over open fire. Soon all of us are dancing around the fire, holding each others’ hands, with the Kurdish men soulfully singing traditional Kurdish folk songs. One of the guys starts poking another for fun, to which he responds:

After the dancing we quench our thirst with lots of Istak, non-alcoholic Islamic beer with lemon flavor, and take rest under the shadow of a tree. The headscarves have come off by now and there’s a lot of teasing going on between the guys and the girls. One of the guys has brought a humongous watermelon which we go about eating “shuturi style”, like camels, as Iranians say. 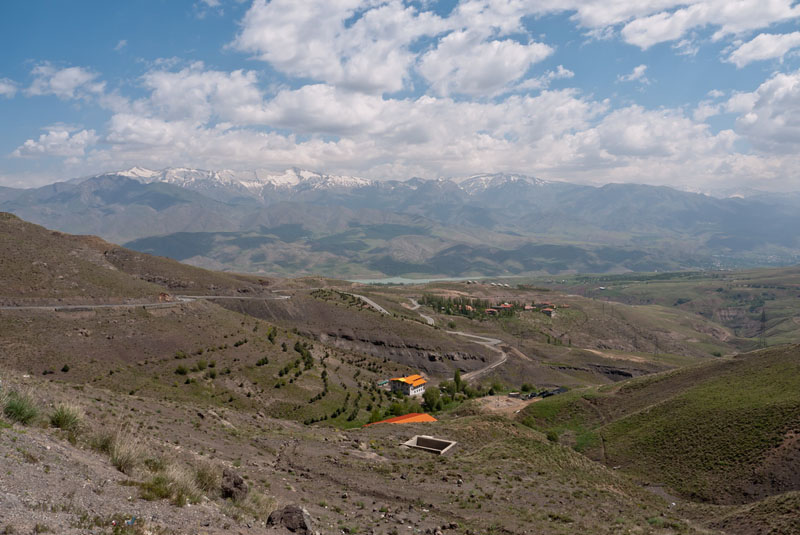 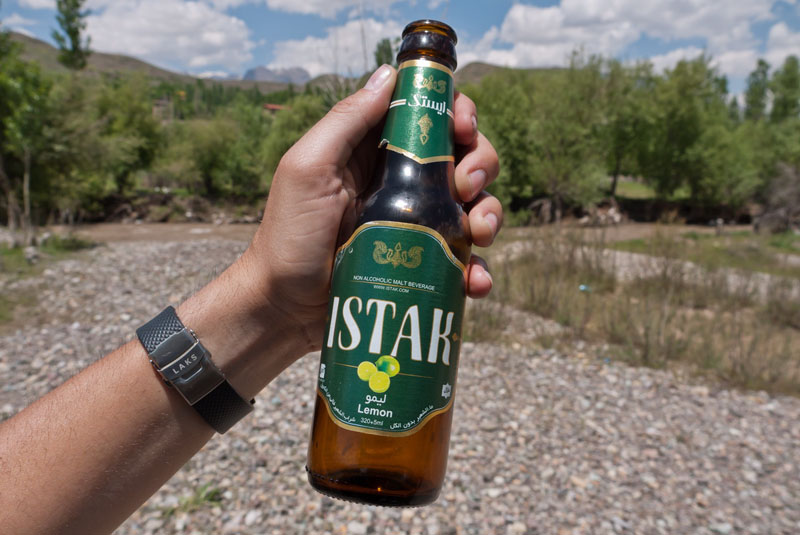 One of Omid’s friends picks up my guidebook and starts leafing through it. He comes across a section titled “Why Is Iran so unpopular?”, and starts reading from it to the others.

“So what do YOU think of Iran?” he eventually asks me with a sad look on his face.

You have an extraordinary ability to make the most unappealing destinations sound appealing!