A Visit to a Thai Village

Funny thing with Thai people that never stops to amaze me is the way they plan, or the lack of it. Planning ahead is considered mai sanook. I heard it said frequently here in Stickman’s site by contributors and people close to me in Thailand including occasionally by my own Thai wife. Phrases like “You think too much” often used, though now at less frequency as she gradually adapts herself to an Australian way of life and the way things are planned and carried out here.

She wasn’t like now when I found her in Thailand two years ago. As late as recent visit she still fell back to her old habit of doing thing at a spurt of the moment.

I woke up pretty content in my wife’s house in Isaan. It was a hazy chilly winter morning in Udon. The air was slightly nippy and pollutants in the air were just a little thick to my liking. As usual, my little one was our “alarm” with his shrill baby cry to signal to all it was time to wake up. I cuddled him with his head resting on my shoulder, then sliding open an aluminium door and descended down a flight of roughly twelve wooden staircases to a kitchen area usually to be met by my mother-in-law. “Duen lieu laa” in-law would usually greet our baby and come closer to give him an affectionate sniff all over. I helped her with whatever I could and soon breakfast was ready and every one would settle outside the court yard’s stone table to a mix of western and Thai breakfast foods: some bread slices, some sticky rice, fried eggs, cut fruit and whatever remnants of dinner from previous night. All these washed down with hot coffee for adults and Ovaltine for the children.

Then, unexpectedly and with no prior warning whatsoever, my wife would tell me. “Do you know we are going to visit a village far away for a meal of natural fishes for lunch?”

“Oooh!” I responded, manoeuvring my right palm to my face in a wiping motion to jump start my brain to elicit a better and more appropriate response. I paused and looked at her for a moment. No, it was not coming, none whatsoever. The best I could say to her was “Ok, right, natural fishes, what are they?” She countered with a broad smile“ the ones they catch from the rai na water hole and arroy duaw, yeaaah, phai!“

In no time the whole family was packed into our Nissan pick-up on loan from one of our Thai relatives. My wife was the driver and navigator and I was strictly a passenger sitting in the front. The journey set off. We cruised through familiar streets and landscapes initially. Then about half an hour into the trip, I was lost in strange rural landscapes. A little further on, it got stranger. Now we entered a series of farm properties. Seating comfort took a nose-dive. We rolled up and down, one pothole after another. Even the Buddha amulets and associates were not happy. They swayed and collided and chimed violently above and in front of myself and wife, clinging precariously to a fine cotton line that secured them from the rear view mirror. Then out of the blue, a farm motor bike rider would do a dare-devil overtake in a barely one-car dirt road leaving behind a trail of grease -laden blacker than black blinding plumes of smoke momentarily causing my wife to reach for the brake until the veil of smoke had cleared and her vision regained. “Phew!” that was close and very dangerous. But to the Thais, this happens all the time and I guess their sensitivity level to this type of driving manner both by the car driver and motor cycle driver is very low. Often, I switched off in this situation so as not to cause a stir.

Meanwhile, her mobile blazed out a Thai tune – an incoming call. It was from one of my wife's many distant uncles. He is an old man from a nearby village. His wife earns a meagre living making Thai sausages and selling them door to door to people she knows. Poor but lovely, I have come to admire and respect for they are the elders of the extended outer circle of the family. I learnt of late that the old man is not allowed to drink whiskey by doctor’s order or he will die. The old man still is fond of his smoke and on one of our border crossings procured him a carton of Lao’s local tobacco “ERA” much to his delight and heartfelt gratitude.

Ok, where was I? The incoming call conveyed to my wife the location of the old uncle waiting at a certain corner of a country road to receive and guide her to the correct destination. Wow! How comforting! This place is not anywhere to be located. I venture to even guess none of the latest navigation devices will assist us. I now took solace from the knowledge that we would get there. I eased back and closed my sun-dazed eyes for a while. Then out of a distance, a hand caught our eyes waving in the hot air. Our old uncle it was, standing astride on his equally old and rusty motor bike. My wife rolled down the window and acknowledged him with a respectable wai. He led on his bike and we followed. I thought the place was now within reach perhaps of a few kilometres the most. How wrong I was. We rolled through kilometres after kilometres of dusty dirt roads, took countless bends, over the many hills passing several make-shift farm houses, hay stacks, village shacks, country temples, rice fields, small townships. NO, we were nowhere near there. It seemed like forever. Everyone was getting hot and then we passed a country town for relief break and in-law took the opportunity to buy some kanooks for our hosts.

At long last, after nearly three gruesome hours we pulled up on a dirt space adjacent to the stilted farm house. 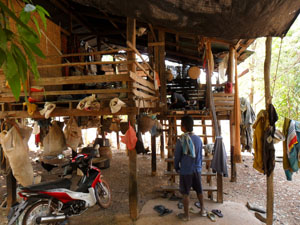 The whole troop of people came to greet us and we then were shown to our seating place for lunch of natural fishes. Many people from my wife’s extended family were already there. Some old ladies were not relatives but came to join us to share some of their own food with what the host had to offer there. All were nice people. Many kids running around the house playing playful childish games. 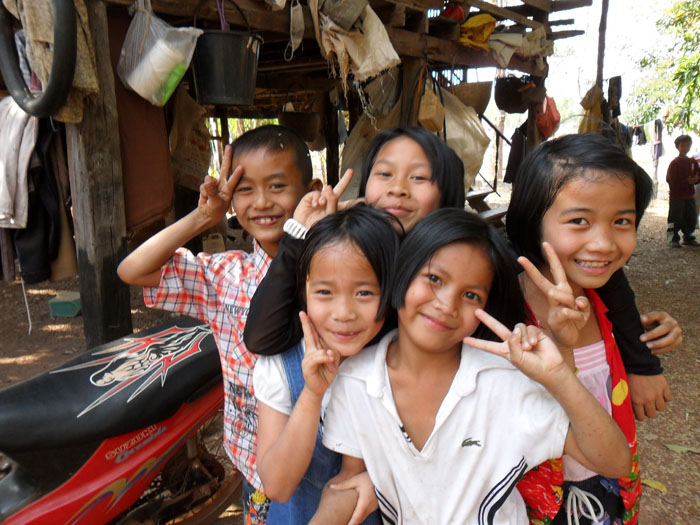 Not only kids, several dogs, chickens and ducks also got into the act of revelry adding to an all round very merry occasion.

My wife and I were supposed to be the “pioneer” guests today. We were suitably sat on a wooden sala with a hammock on each side. The structure was nothing more than a few left over planks nailed together and made use of the mango tree trucks as supporting posts on each of the four sides. 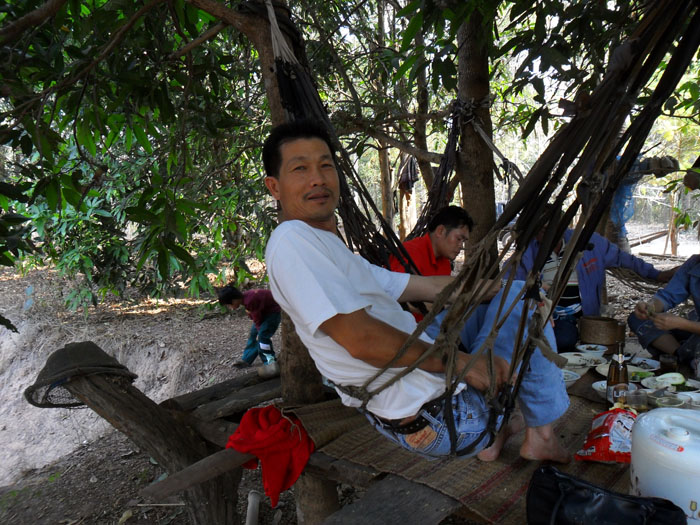 Right behind the sala and in open view to everyone was a huge water hole containing to my judgement quite muddy water and lived in it some terribly frightened undersized fishes of all sorts. Two men, one with no shirt on were seen groping frantically beneath the murky pond with their bare hands for any kinds of lives for lunch. Two fish nets were lowered on each end to trap any unwary fishes of any sizes. 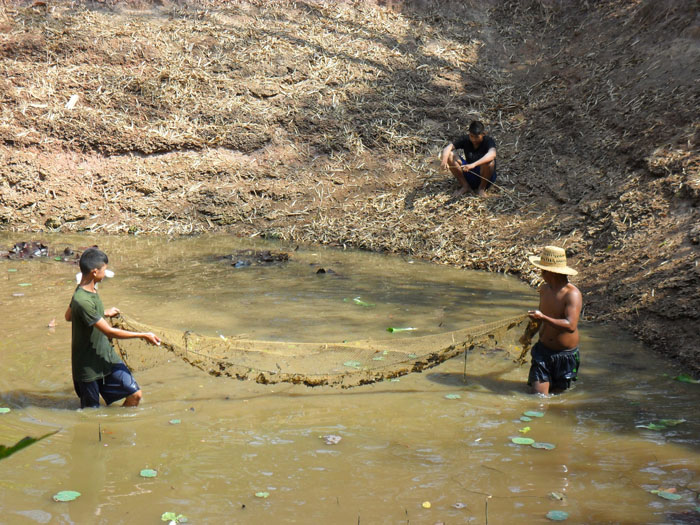 Desperate time which includes feeling of hunger needs desperate measure. I could smell the sense of hunger. I could taste desperation in the air. But who am I to judge the country folks of what they do to eat and satisfy their hunger. I felt like one of them. Relaxing and chatting with my wife’s folks. Laughter came easily with alcohol and I was the merry man amongst them. 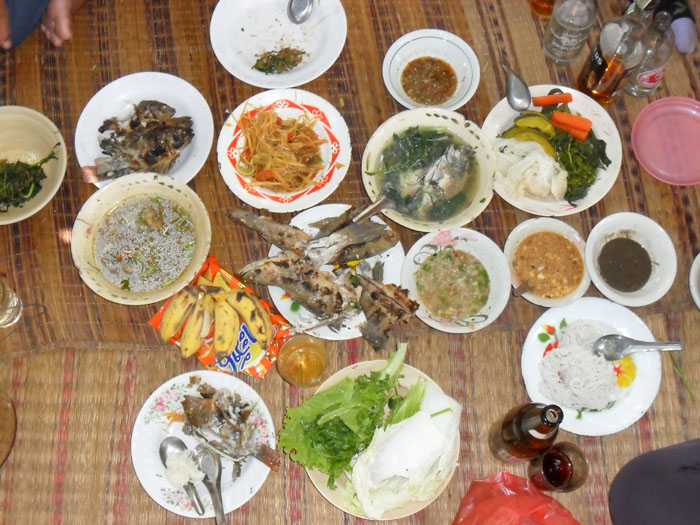 While, we sat, laughed and talked, plates after plates of natural fish were served with rice harvested from nearby field, plus local vegetables of unknown descriptions and spicy sauces I did not even know their names.

Everything takes its proper place in the village. The woman folks gathered around, cleaned and cooked the fishes the man folks caught. Other women or younger girls helped to fan the charcoal burner, stirred the cooking pots, dishing the cooked food and served them to the guests. At frequent intervals, some women appeared to collect and refill our dishes and drinks. Then another group sitting around in the far end washing up the dishes and recycled them for use again. Here, you see the typical example of what we called “Division of Labour” at work and no one was complaining. Aah! What a life! Who said this is a Land of scams instead of Land of smiles and plenty of them. While we were enjoying ourselves, another group of guests arrived. They clawed down from the mango tree upon which our sala was supported. These gate crashers are way down the food chain, but they are entitled to take a place in the village food chain nonetheless. 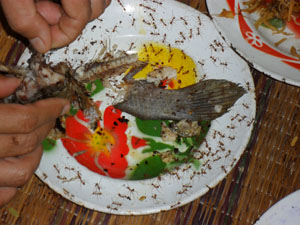 Their determination to survive is as good as our own. So long as you sit very still and not to cause any sudden threatening flip of a finger or slap of a palm, they will just dine on your leftovers uninvited in their thousands. Wow! What a sight to behold. I have never seen anything like this in my entire life. An angry bull red ant is a formidable combatant. You would not wish their sting from a pair of their crab-like jaws. Move if you must, albeit very slowly. Pay your respect for they have the right of way because we are the intruders of their territory, not vice versa. Dine carefully as we did, harmoniously with our bull ants, no silly sudden moves and everyone was unharmed.

Bull ants are social creatures, a little like us in a way except they like to do things in group of thousands. It seems like when one group of ants found a food source, they relay to all their mates near and far to join them. When the whole colony came marching towards your plates dotting your entire dinning areas and everything above them like red sesame seeds, it is time to go, I mean bolt and fast!!

What a day! Amazing Thailand!

The Place of Glass Walls, Wayward Souls and Tickled Fancies

Update On My Emporium Opening