The Third Time’s the Charm!

Even after being here a number of years now, one of the things I still enjoy doing in Thailand is just walking around town, and just taking in the flow of everyday life around me. I can honestly say that I am never bored strolling through a busy marketplace.
I am fascinated with vendors selling their colorful wares. The fact that I am often clueless as to what exactly they are selling doesn’t diminish my pleasure one bit. Thais never seem to mind me poking about, and I receive
many more smiles than frowns.

Last week I was down in Bangkok for a quick day and a half. I mostly wanted to peruse through Dasa Books and enjoy a few nice dinners, but also to spend time chatting with my buddy Stick. Stick also shares my love of “just walking around”.
Our last stroll back in April was through the Red Shirt Camp, which was quite an experience! Over dinner at the Londoner, he suggested exploring China Town, which sounded like a fine idea.

While finishing up dessert, warm apple pie with custard sauce, an Australian friend of Stick’s stopped by our table for a chat. We mentioned that we were going to walk through China Town. This nice fellow, whom I will call Mick, asked if we minded
if he joined us. Why not? We all agreed to where and when to meet the next morning.

While sitting at our booth, Stick asked us if we were interested in going over to Cowboy for a while. I wasn’t interested, and neither was Mick.

“First of all” I said to Stick, “I don’t have the iron will that you possess! Personally I find it very difficult to resist the allure, fleeting as it might be, of a lovely girl, wearing very little, while gyrating a few feet
from my face! Secondly, the odds of a bar girl retaining the ardor she professes while trying to get barfined, lasting once in the bedroom are pretty poor…in my humble opinion.”

Mick was in complete agreement, and proceeded to regale us with his piss-poor luck finding a “winner”. It was all a “bloody crap shoot” at best Mick stated with authority. I concurred whole-heartedly. Stick insisted that we
could have a pleasant time just admiring the scenery. Oh well. Maybe tomorrow night he would “twist our arms”!

The next day we set out in a taxi for China Town. It was a pleasant morning weather wise, when we set out on foot, which was a relief. Somehow it always seems hotter in Bangkok! I think there may have been a celebration going on, because there was more
than the usual number of vendors out on the sidewalks. Quite a few people were at the local temples. 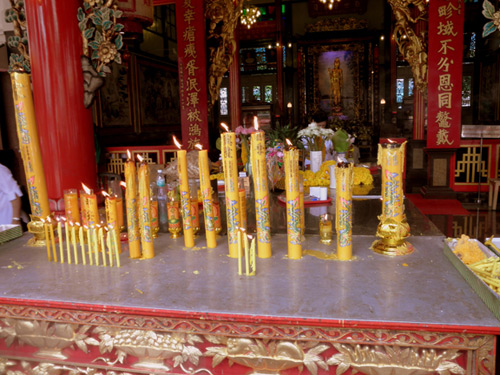 It was interesting to contrast these temples to the typical Thai ones. They have their own lovely style, and of course are quite colorful.

I didn’t know that it was pomegranate season until we encountered people selling heaps of them, and even better, icy bottle of pomegranate juice. 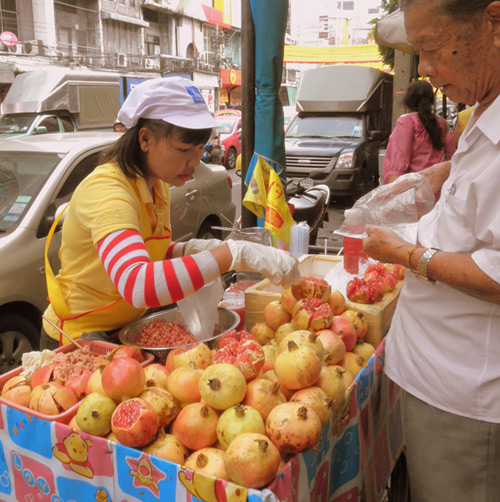 Now here was something you don’t see every day. Here are two guys with large wooden mallets pounding away at what appeared to be warm peanut toffee. 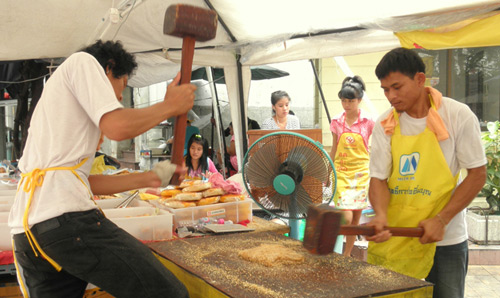 A little further on we came across a number of fruit vendors, whose wares were most attractively displayed. 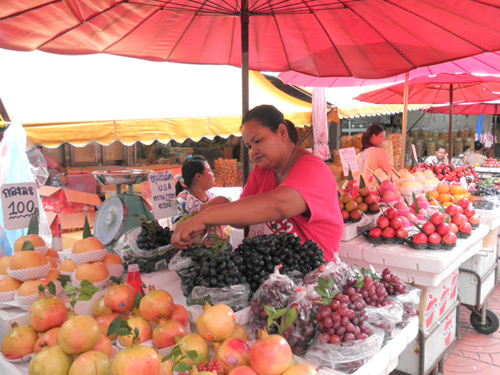 It might not have been Christmas time, but the aroma of roasting chestnuts was definitely in the air. 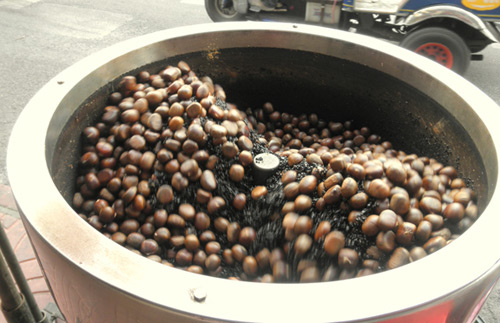 The aroma of chestnuts was only surpassed by the aroma of roast Chinese duck! 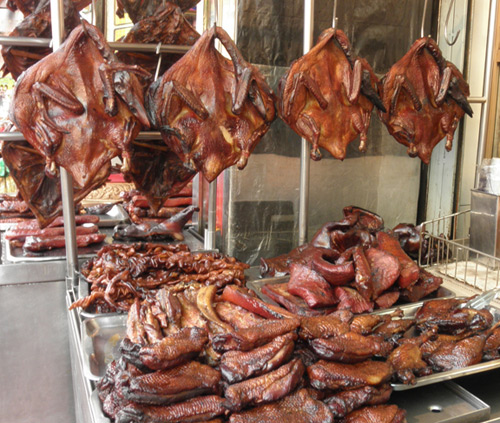 There are many shops in this area which carry Chinese medicinal herbs. I for one believe that many herbs are indeed efficacious in treating certain diseases. The Chinese certainly have a tradition of herbal healing that stretches back for thousands of
years. I was interested to see if they carried anything which might help my diabetes, so we stopped in for a look. 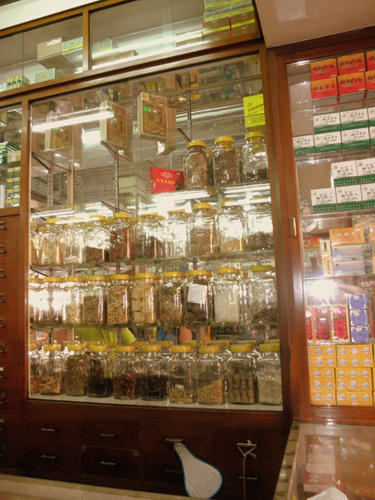 Indeed the pharmacist had something which claimed to help. The list of herbs was long and unfamiliar. What the hell I thought; this probably won’t kill me, and in fact may indeed help my condition, so I decided to try a bottle. I haven’t
taken them yet. I’m waiting to try them a week or so before my next check-up.

At this point the pharmacist, with a glint in his eye, asked if we were interested in something to “improve man’s health”.

“This formula is very good!” he insisted, taking down a box of herbal pills from a shelf.

The list of ingredients was very long, but what got all of our intention was “desiccated buffalo penis”! The directions, which were in many languages including English, said to take three capsules an hour before sex for 6-7 hours of extreme
vigor.

“What I think mate is that I’ll bloody well try them!” 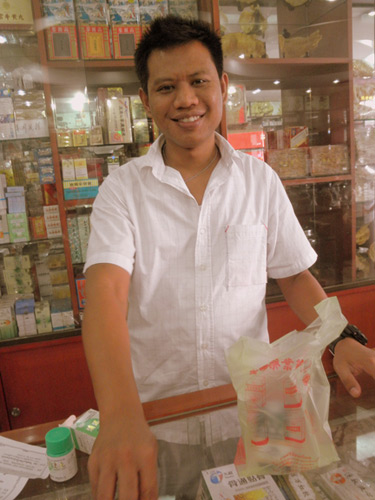 “You know, Mick” I said as we sat over some iced coffee. “I’ve been thinking about what you said about trying to find a winner in a bar being pretty much of a crap shoot. Using that analogy, maybe it’s time to stop using
the house’s dice, and bring your own pair to the table. You’ve just bought an ancient Chinese elixir which guarantees success. Now all you need is a talisman, a lucky number, and you are good to go!”

As you might expect, Mick rolled his eyes and said “Right! I don’t believe in superstition!”

“I don’t either” I said, “I’m just suggesting making an amusing game out of the whole thing. What the hell! You couldn’t do any worse with some lucky mo-jo!” “Whatever” was his none too amused
reply.

A short time later I stopped to buy a 2011 Chinese calendar. I quickly saw from looking at the pictures on the stack of calendars that 2011 is the Year of the Rabbit. Chinese bunnies seemed okay with me, so I bought one for 50 baht. Hmmmm, bunnies? Suddenly I called out to Mick, “Rabbits feet!!! Here is an auspicious talisman if I ever saw one!”

“Sweet Jesus”, he said, I told you I don’t believe in any of that occult rubbish!” Nonetheless, he did walk away with a calendar. On impulse I asked the woman for owned the shop what her lucky was. Wordlessly she pointed to a sign outside her shop, which was emblazoned with the large god and red numerals 3003. “And there is your lucky number” I told Mick with a dramatic… and ever so fake look of astonishment! Mick once again said this was all rubbish, but he did so with a big grin on his face.

The three of us decided to have an early dinner at Sunrise Tacos, which was fine with me. The food is delicious. The price is inexpensive. The portions are enormous. While we were eating, it began to rain, sometimes quite heavily. It was not a good night to go for a walk. Anyway, I had an early bus to catch the next morning, so despite Stick’s arm twisting, I declined going to Cowboy and headed back to my hotel. Before heading out though I exchanged e-mail addresses with Mick. “Let me know how the dice roll” I said.

“You’ve certainly weighted them heavily in your favor…ha ha!”

It wasn’t until my bus stopped for a break near Nakhon Sawan that I decided to give Stick a call and see how last night went. Apparently the bars were dead quiet. They stopped first at Tilac, where there were only a few girls dancing and very few customers. No chemistry for Mick there. Next the two of them went to the Doll House where they were the only blokes downstairs, and two girls dancing. It was a bit busier upstairs, but again, Mick didn’t connect with anyone.

“I had some business to attend to” said Stick, “so Mick and I went our separate ways. He said me might stop in at Baccara for a few minutes, but didn’t expect he would stay long.”

So much for good luck charms and mojo I thought to myself. All that is of course a complete lot of rubbish!

The next day I was surprised to receive an e-mail from Mick. Before opening it, I expected a good natured ribbing about rabbit’s feet and “lucky numbers”. His message was about the last thing I could imagine. It read as follows.

The third time’s the charm!

Hmmmm, maybe the next time all of you out there who are reading this are in town, you should get yourselves a lucky harm or two! That is of course if you believe in that sort of thing. Hell, if it worked for Mick, maybe it’s not complete rubbish!

It was great to catch up!

It's Popular To Bash Samui