“You put the lime in the coconut and drink it all up.”

Many of you might have a metaphor or two to describe “the good life”. By good I mean an ideal state of existence, where the sun always shines, (unless you’re a skier, or just like rainy days), and gentle breeze redolent with jasmine blows softly (unless you are partial to thunder and lightning, and just the thought of fresh flowers makes you sneeze and your eyes water).

For the past ten years, my picture perfect dream world has always included picking a fresh coconut from my very own coconut tree. Now I know I can hear some of you out there snickering, and I can just picture more than a few pairs of eyes rolling at my idea of paradise. “That’s Sawadee’s idea of paradise? Man, he is one lame dude. Where are the hot sports cars…..and more importantly the hot girls?”

Well, I should set the record straight and say that I wouldn’t turn up my nose at either of those. There is in fact a whole world of “stuff” out there that I wouldn’t mind having to play with. So, what’s with the coconuts? Inquiring minds demand an explanation, and that’s exactly what I intend to do.

Amazingly, before my first visit to The Land of Smiles in 1998, my idea of a coconut was a hard round brown ball. If you wanted to open one, you needed to wield a large hammer. I had occasionally done just that. A good hard whack and with luck I did enough damage to pry the thing apart. Inside there was half an inch or so of hard white coconut meat, and a small amount of bitter liquid. 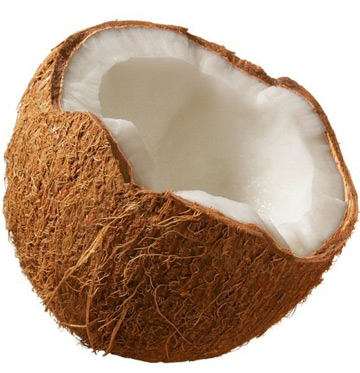 The liquid was unpalatable, and it took some determined prying to get the coconut meat out of the shell. It was fairly tough chewing, and not all that tasty. I suppose that’s why most of the coconut I had ever eaten was of the sweetened variety from the supermarket baking aisle. For many folks living in Farangland, the word coconut generally is followed by the words “layer cake”. Don’t get me wrong. I’m not knocking a tasty slice (or two) of this succulent cake. I simply never knew there was anything more to a coconut.

It wasn’t until I was relaxing on a beach in Phuket that I became truly enlightened about the world of coconuts (Cocos nucifera). I remember it was a sunny day in December. It was comfortably warm, but not too hot. This is the kind of weather that easily seduces first time visitors to Thailand who visit during the cool season. If my first visit had been say, to Issan during April, I might have had an entirely different experience! Be that as it may, like many of you, my first visit to Thailand was intoxicating. I loved it all! The fact that I was lounging on the beach with a smiling, dusky skinned beauty certainly put me in just the right frame of mind to enjoy my first fresh coconut.

A Thai vendor came along pushing a cart with a bunch of green coconuts in a tub filled with ice. My companion enthusiastically said we really needed to try some of these, and I am thankful that she was so insistent. The gap-toothed old woman quickly fished out two large ones out of the tub, and then proceeded to expertly trim the tops with a wicked looking machete. It’s a good thing she was so proficient, because with one wrong whack, she would have been missing a few fingers! She then pried up the loose tops, inserted two straws and handed them over with a flourish. In a cartoon universe, my first icy sip of nam maprow would have been accompanied with a bubble above my head filled with exploding fireworks and a thunderous rendition of the 1812 Overture. Wow! What was this stuff? The flavor was subtly sweet with the kind of overtones that wine enthusiasts gush about. It was refreshing to the nth degree. Maybe it was the endorphins flowing from my present GFE, but I was instantly hooked on fresh green coconuts. What’s more, was only half way through the complete coconut experience!

When I had finished the last slurp of juice, the old woman took the empty shell (or what I thought was an empty shell) and with one blow from her knife split it in two to reveal the gleaming treasure within. With a grin, the woman handed me back the two halves along with a spoon. If I was expecting a tough tasteless rind, I was soon delighted to scoop out a bite of soft, tender flesh that was so full of flavor that a second fusillade of pyrotechnics was called for, along with the Mormon Tabernacle Choir singing the Ode to Joy. Now I know this was hardly the kind of mind blowing orgasmic experience that you might have say, during a vigorous romp at the Eden Club, but nonetheless it did make a lasting impression on Sawadee.

On all my subsequent visits to Thailand before moving here, I rarely passed up the opportunity to enjoy a fresh coconut. Given how many coconut trees dot the countryside, you’re never far from a coconut vendor. 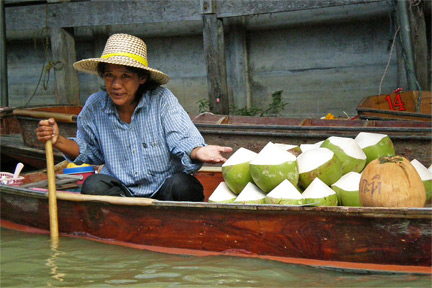 My wife and I spent the first five years of our marriage in western Massachusetts, which is about as far as you can get from a coconut palm. While dreaming about living in Thailand, often by a merrily crackling fire while a blizzard raged outside our snug living room, we painted scenarios of an idyllic life on the other side of the planet. Often these discussions ended with, “……and someday we will pick fresh coconuts from our very own tree!”

Not long after building our home, we starting making this dream a reality. We planted nine coconut trees in out new back yard. These were in addition to fruit trees of just about every variety. When I say “coconut trees”, I am not referring to actual trees as such, but rather to sprouted coconuts. 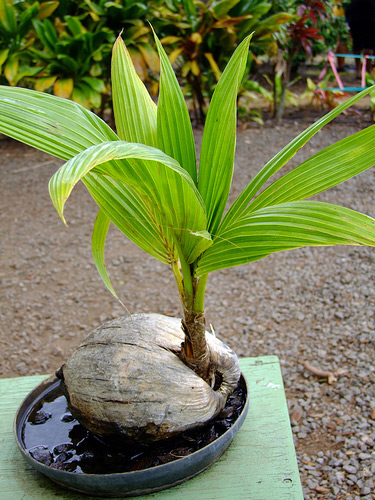 These I must admit are not very impressive. They are little more than a small green shoot protruding from a dull brown husk. I think we paid about 20 baht each at a local nursery. We dug nine shallow holes, placed a “tree” in each hole, covered them up, except for the bit of greenery and gave them all a long soaking. From a horticultural point of view, things don’t get much better for most plants, than Thailand. The growing season is a full 365 days a year. The abundant sunshine, warm temperatures and plenty of rain means that trees mature in a fraction of the time that they would in a colder environment. A generous monthly dose of fertilizer doesn’t hurt either!

Since we first planted our little nursery, we have harvested lots of mangoes, bananas, guavas, pomegranates, gooseberries, sugar apples, limes, and some Thai fruits I have no name for. The tiny coconut sprouts we put into the ground became enormous trees. But where were the coconuts I kept wondering? As they say, “All good things come to those who wait." Earlier this year the seemingly endless wait was finally over.

Late one afternoon I heard my wife call excitedly through the kitchen window, “Come here quick and see!” I didn’t know if this meant good news or bad news, but I hurried to the back of the house where I found my tee-rak pointing with a big smile on her face. It took me a minute to know exactly what she was pointing at. Then I noticed some slender green “twigs” growing out of one of our coconut trees. 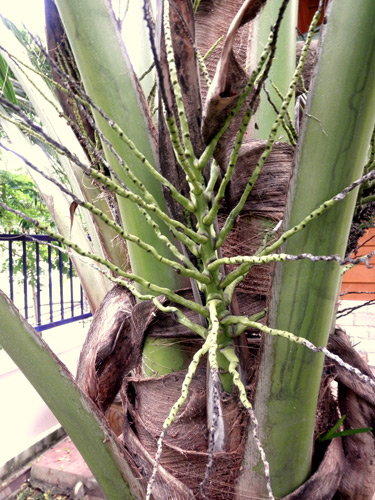 It was hard to imagine these tiny things were future coconuts, but apparently they were. Indeed my wife confirmed it. In her days down on the farm, she had seen many bunches of coconuts begin in just this fashion. All we had to do is sit back and wait for nature to work her magic. Compared to a fruit such as an apple, coconuts take their sweet time to mature. Even as I sit here writing this, they still are not fully grown. 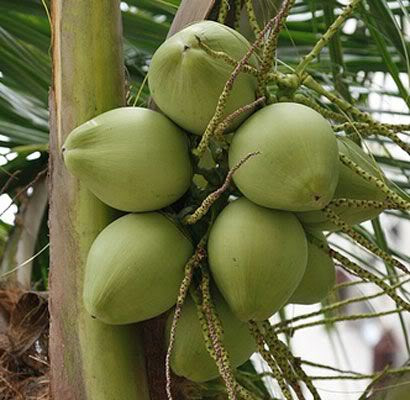 That didn’t stop my wife from going out and picking a few recently. Among her other virtues, she is one hell of gal with a machete. With a few precise strokes she had them trimmed and open. And were all those years of waiting worth it? A fresh green coconut may not be money in the bank, but I’ll settle for one small dream fulfilled. I think this guy agrees. 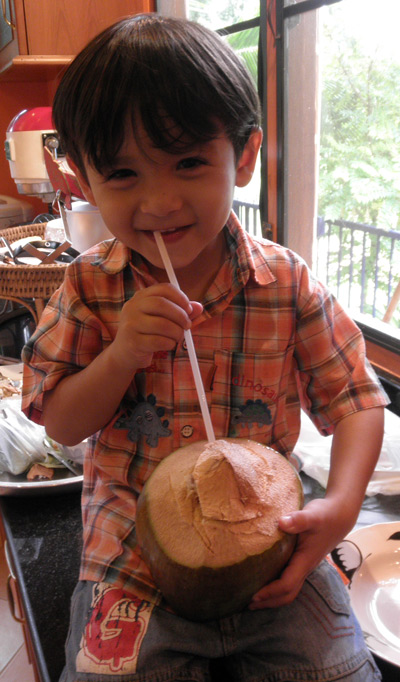 Very nice, and once again you show this wonderful ability to weave a very nice story out of seemingly mundane subjects!

How To Get A Girl In The West