Yep. That's the main reason I go to Thailand. To live out a fantasy like no other. All the women you can be with in a 20 day period.

It's like going to an all you can eat buffet of sex. You have all you want, when you want it and "how" you want it. It's like when I went to James Bond movies as a kid. He always seemed to get all the sex he wanted from any girl he wanted. Of course, he didn't have to exchange money for it. After all, he was Bond, James Bond. Yeah, I guess it's like that fantasy.

Or, there's always Hugh Hefner and his Playboy magazine. Once again, here was this guy that seemed to get all the sex when he wanted it, and from who he wanted it. Did he have to pay for it? No way. He was Hugh Hefner!

Then there were all those musicians that appeared on the scene in the sixties. They also got all the sex they wanted from all those groupies. All they wanted, when they wanted it.

Do we see a pattern here? I don't think I was very different from most teenage boys with these fantasies. Maybe I just picked a poor set of role models? Gee, just to have all that available sex for even a day, and hour, or a minute. It seemed to be a little dream that wouldn't and couldn't happen to me in my lifetime. I guess that would be till years later when some guy told me: Yeah, I was in the service years ago and the Thai women were beautiful and very available! You've just got to go for a visit!

I was coming off a 12 year relationship with a crappy ending (aren't most of them), so I thought, what the hell, I'll give it a go.

Well, January will be my sixth trip over. I've really got the sex areas over there scouted out and really know my way around. Stick's site has been very helpful with information.

I finally got what James Bond and Hugh Hefner had. Unlimited beautiful women at my disposal. It's really been a lot of fun. I thought about moving over there permanently, but that would be like a guy with a drinking problem purchasing a bar. I'm smart enough to know that would eventually be detrimental to my health! ha!

Anyway, I'm thinking. I've got a great life. I've worked very hard a have a nice house, money and lifestyle and once every year I get to go live out that sexual fantasy I had as a youth. Things couldn't be better for now. I never thought I'd ever purchase sex, but after that first night in Bangkok a few years back, all that changed. I really find it can be great fun. The girl gets what she wants and I get what I want. Seems like a win win to me.

I got to thinking. I read about actor Mel Gibson's life and how he divorced his wife and ended up with this Russian gold digger. He spent millions on her trying to help her career. He bought her gifts. He gave her this great lifestyle with all the perks of living that high end lifestyle, and did this Russian chick treat him well in return? Hell no! She used him for everything she could get. Yeah, she was blessed with the good looks and good body, and she knew just how to use all that to get just what she wanted out of Mel. Once he finally saw her for what she was, he lost his cool. He was screaming at her on the phone and what does this bitch do? She purposely gets Mel on the phone and tape records him flying off the handle at her, and then releases the tapes to the media. She had the whole thing planned. Just another way to squeeze every last drop of cash out of him that she could get. (Sounds like my last girlfriend, so I can relate!) Here's a recent photo of Mel wearing a disguise just to leave his house. 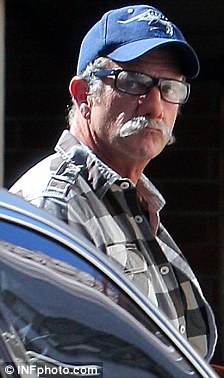 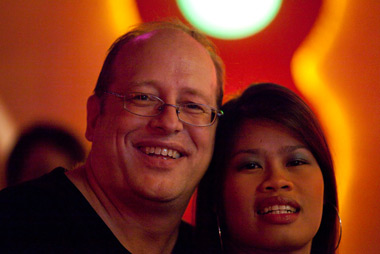 Larry's just an average nice guy from the U.S. Nothing special about his appearance or looks, just a genuine "nice" guy that ended up managing Secrets, a great bar in Pattaya. Now I ask you, who has the best life? Mel Gibson or Larry? If I had to choose, I'd put my money on Larry. He's surrounded by many fine ladies and seems to be respected by all his employees. I guess that just goes to show you, that money and fame doesn't mean you are happier in the long run.

Well, Thailand is like that. A place where you can go and if you've got a little cash and treat the ladies nice you really feel like you're on top of the world. Will that feeling last forever? I don't think so. It's like most things in life. A new house, a new car. Sure they give you a little perk of happiness at first, but then the newness rubs off. I guess I'm at the point that the "newness" of Thailand is wearing off. Nothing in life lasts forever. I'll keep going to the LOS as long as it still is fun. Maybe I can try other nearby counties just to get a change of scenery. I've tried Vietnam, Cambodia and Laos. Sure you can find hot ladies in all these countries, but Thailand has got them all beat in my opinion. I love tiny slim flat-chested women, so it's no wonder I'm in heaven in Thailand.

Who would you rather be, Mel or Larry? Funny question that!

Another View of India