Another View of India

Five years ago, while half-way through a world cruise, my Father fell ill and was hospitalized in Southern India. My first, and I hope not last, view of India, was my urgent trip there to the State of Kerala, where my Father spent his last days in a local
hospital with a medical tourism emphasis. 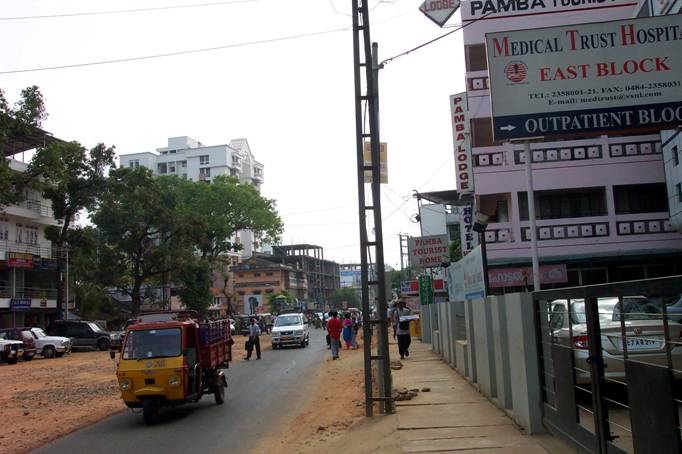 During his stay there, he was cared for by a Western trained medical specialist and provided with extra nursing care in the Critical Care Unit (CCU). The hospital waved visiting hour restrictions for me, allowing me to come and go for meal times, to be
there in the mornings, and to visit at any hour as needed. As my Father had difficulty getting enough nutrition solely on Indian hospital food, the nursing staff would bring him food from local, Western cafés and fruit from the markets. I
assume the cost, given their low salaries, was covered through hospital petty cash.

When my Father passed away, the hospital assigned me a car and a staff member to assist me in repatriating his remains. Actually, they wanted to pick me up and return me to my hotel throughout my stay, but until that point, I did not feel it necessary
for quick trips to and from the hospital.

It is difficult to express how grateful I am to the hospital administration for their assistance in repatriating my Father's remains for burial back in America. In India, burials are not common and remains are rarely repatriated to other countries.
Officials often do not understand the urgency of such situations to Westerners and some, to be frank, view such situations as opportunities for extra income. The staff member supplied to me by the hospital and the local shipping agent who worked
with the cruise line helped to cut through the bureaucracy and shielded me from the more difficult police officials who seemed to wish to put their hands out.

During this latter time, the owner and CEO of the hospital took me to dinner at the high end hotel that he owned in the nearby resort area, picking me up and returning me to the hotel in his limousine. Needless to say, as the owner of the hotel, I was
treated to a wonderful meal prepared and served to me by the head chef. His hospitality to me throughout my stay was remarkable and appeared quite genuine to me.

The shipping agent had me to his family home for dinner. I spent an evening there with his wife, children and mother. It was a very nice time and a chance for try some very nice, home cooked, Southern Indian dishes. Southern Indian food is much different
than what we normally see in the West and they have quite a few tasty seafood curries and the like that are well worth a taste.

The nursing staff and hotel staff were all wonderful to me. The hotel unblocked my phone for international calls, but never billed me for any of them. Their hotel Director of Marketing, selected perhaps as the best English speaker, came to visit with
me and gave me his home number should I need any assistance that they could provide.

I suppose some of the treatment I received may have related to the fact that my Father was gravely ill and was dropped off by the QEII, one of the best known, luxury cruise ships in the world. Also, given difficulties with accents (tough in Southern India)
and language, we had a friend in the States with medical training who was from the area contact the hospital for us several times while I arranged my trip. In addition, there was a travel insurance company involved and my wife reviewed medical
reports for me as well. So perhaps my treatment was a bit more VIP than others might experience, but my impression was actually that it all seemed like genuine efforts to be helpful and supportive. Indians back in the States who are from Kerala
also told me that this is what they would have expected from people there as the region is known for being welcoming and family oriented.

India is often referred to as a subcontinent. There are many different and varied subcultures. Kerala is known for its strong emphasis on education and, to their pride, for highly valuing women. Locals were quick to point out to me that gender imbalances
and mistreatment of women are limited to the Northern States. They seemed to take great pride both in being the State that exports the most medical professionals and the best place for women in India, in their minds. Odds are, if you meet a physician
from India, then they are from Kerala.

Yes, traffic is a huge problem with the rapid and accelerating addition of motor vehicles to cities not designed for them, crazy driving (like bumper cars), dust and the like were endemic to the experience of visiting there. But, no, not the dead bodies
or public defecation and urination that you can be exposed to elsewhere in India. 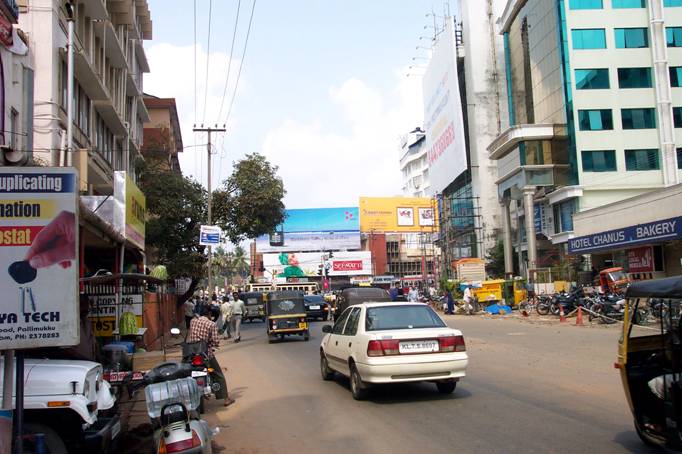 Loud, boorish, or the like are not accurate descriptions of those in the South of India. Frankly, the people there reminded me very much of the Thais.

Would I return? I’d love to and plan to at some point. I enjoyed a bit of sightseeing. Fort Cochin (also referred to as Fort Kochi) is a nice little island where you can eat fresh seafood and take a look at the Chinese Fishing Nets. 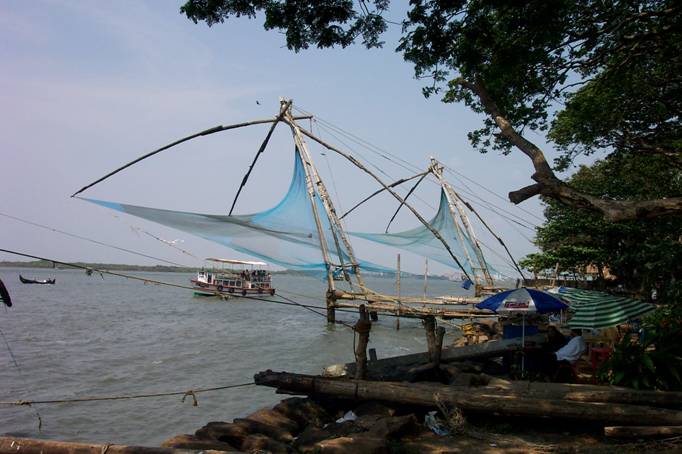 There is also a large, inland network of waterways where you can take tours on small boats and canoes. 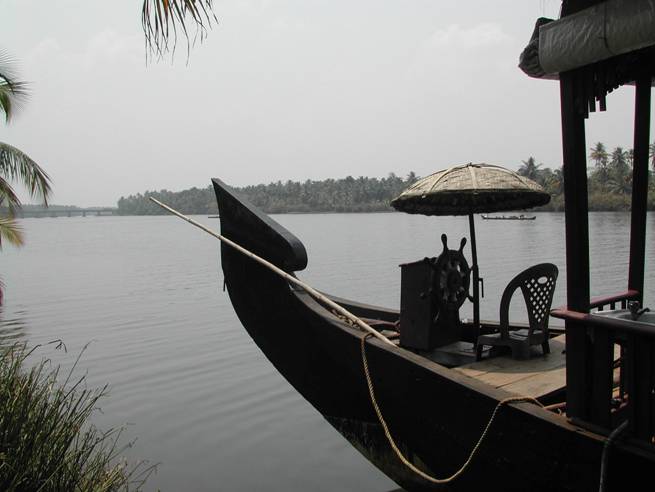 Canoeing and walking in the wooded areas (bush, jungle?) made for a pleasant break from the heat. 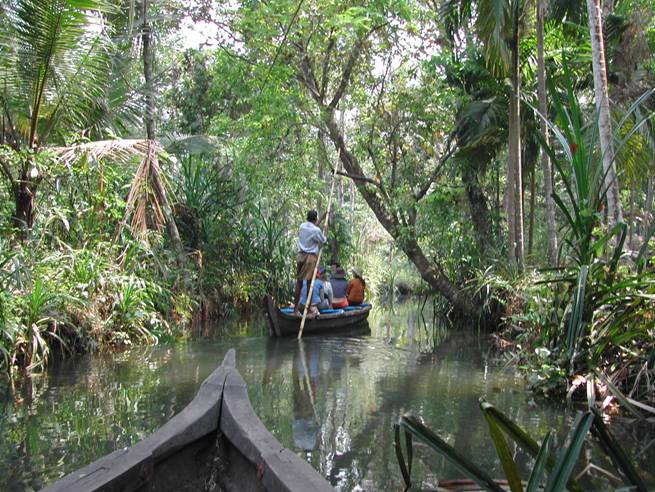 During a stressful time, getting out in nature did a lot for me. 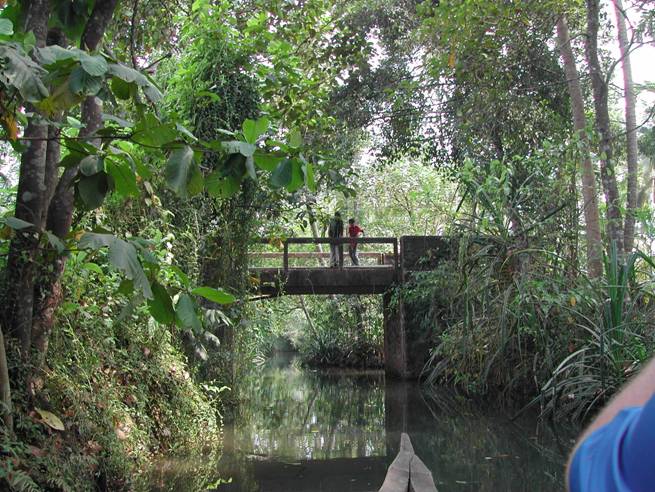 Low tech, Indian manufacturing, like the production of a particularly prized type of calcium from shells, always interests me for taking a look at how things can be done simply, when labor is cheap. 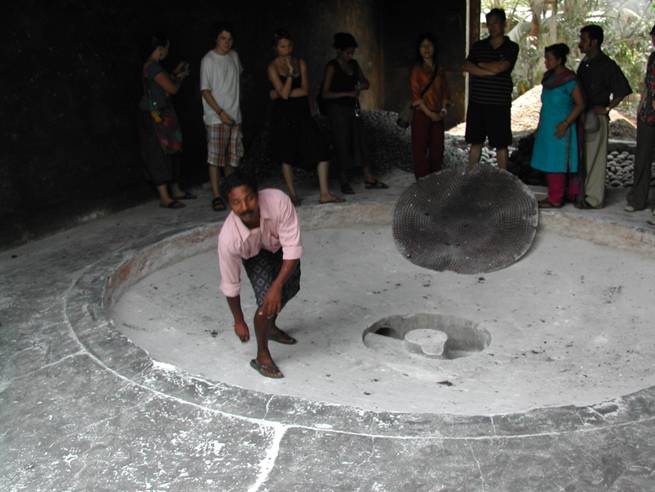 Needless to say, given the circumstances of my trip, I did not have time to do much sightseeing. I’d like to go back some time and really focus on that.

Any interest in Northern India? Not really, but I know plenty of other people who love it.

When generalizing about other people and cultures, the larger the country, the less well such generalizations, that often seem to be to be more apologistic for racism than explanatory, are likely to be. India is a clear case in point.

And on an aside, the cost for specialist treatment, extra nursing coverage and eleven days in critical care? Five thousand U.S. I put it on my credit card and was later reimbursed through my Father’s travel insurance.

Should you buy travel insurance? You betcha. Had my Father survived, he would have required medical evacuation on a specially equipped aircraft (due to the need for full air pressure). The cost for that? Twenty to thirty thousand dollars U.S., minimum.
With travel insurance, a crew was on standby should I decide to evacuate my Father for care in the U.S. or should he have recovered and needed medical support to return home. So, for a few hundred dollars, the cost of travel insurance proved well
worth it. I now buy it when I travel.

That, to sum up, is my experience of India. I have known quite a few people from India in the West and enjoyed their company. Never have they matched up to the negative views some hold or post about them and my experiences visiting there have not either.
Mind you, as noted, it is a huge and widely varying country and my exposures are typically limited to the well educated.

Should you visit, be sure to put Kerala (look for Cochin/Kochi and Fort Cochin/Fort Kochi in your travel guide; I assume those variations relate to transliteration issues) and be sure to include the area in your itinerary. As of my visit a bit over three
years ago, the costs are very favorable (probably a bit less than Thailand is these days) and the people were great, if sometimes difficult to understand.

Sorry to hear of your father's passing.

India sounds incredibly fascinating, while at the same time I know that travel and the Indian way of doing things can be rather frustrating to Westerners not used to it.