We all know this guy by his full name – Thai Man No Good. Well, I should say we know of him but none of us have ever met him. He has been tried and convicted of irresponsible behaviour toward Thai women, getting them pregnant and then disappearing without providing a baht’s worth of support to the mother or his child. Like the mother we don’t know where he has gone. We just know he came from her village and seduced her and then ran off. Typical, we say. She was inexperienced and he just took advantage of her. Now the poor girl has to work in the bar industry to support the child and it’s a job she hates. It’s just awful what these upcountry morons are like. We’d never treat the girl like that. Well, no, I don’t know the guy but the girl is really sweet and she told me everything. Yeah, we get along really well and I like her a lot. I mean how could any guy just lie to her like that? I took her shopping last week and she didn’t want to buy anything, just look. But I could tell she wanted something and I bought her a whole new outfit and some clothes for the baby, too. She’s pretty nice, ever so grateful, and just never asks for anything. She deserves better. Name’s Noy. I’m going to help her if I can. Hey, just look at that smile and those eyes.

Did you ever hear anything like it before? Here are some real anecdotes from the bar scene.

I can’t remember where I met Saa, but it was some time ago. I used to see her off and on with long periods of absence. She was really smart and, frankly, not much of a looker – maybe that is why she had no children though I believed it was because she wasn’t ready. She learned to speak English pretty well, knew a little French, and was fluent in Khmer and Yawi in addition to Thai. The last time I chatted to her she told me she had lived in my building for six months with a foreigner though we never managed to run into each other. She said she hated the arrangement as the guy was always suspicious and checking on her – ‘he want contron me too mutt.’ She moved out despite the money down to On Nut into a building where a lot of bar girls and freelancers lived. She loved it there because she had so much in common with the girls but she complained their Thai boyfriends made too much noise in the alley beside the building. She said they were all from back home and, like the girls, they had no skills and little education whereas their girlfriends could produce cash every day. These young men were, by one measure, typical TMNG but Saa saw they just had nothing to do and by implication, had no self respect as men. They had been emasculated by the fact that they were kept men, dependent on their girlfriends giving them money and even the motorcycles they rode. They got drunk, quarrelled and fought and became the subjects of TMNG stories for farangs. Saa later introduced me to her younger sister, also without a child. That’s how she got into the freelance business. I was her first customer, too.

I met Bpoo on the second floor of Nana perhaps a week into the dancer’s life. She was a tall and slender Chinese Thai from Chiang Mai. She was lovely and curious and bowled over by the fact that white men with blue eyes wanted to take her out of the bar. She’d seen pictures of foreigners but never been close to one. It wasn’t long before she came to the attention of Japanese customers and got on their list somehow, raking in the cash day after day – it was a great life for her as she didn’t even need to make the effort as she did with farangs. I think she was a dancer for about five years and we used to say hello regularly until the day she disappeared. But she came back in a little over a year, now a single mother. After five years of safe sex she got pregnant at home by TMNG. I asked her why and she said she didn’t know – she just wanted a baby. I inquired who the father was – some 45 year old Chinese-looking Thai man whose whereabouts she no longer knew. It was just her time to have a baby she figured and I concluded she found a guy who would present the kind of child she expected to have and let him impregnate her. After all those customers in the big city she certainly wasn’t seduced. Last time I saw her she introduced me to her kid sister who had no child and had just started working in the bar. I wondered how long it would be before TMNG got her, too.

There was a gang of four from Buriram who arrived as neophytes in another second floor bar. I went with all of them within ten days and gave each my lecture in Thai about safe sex, hooking little fingers at the end to make the agreement binding. Three of the four had virtually no experience in the matters of the flesh and they danced only for a few months until the rice harvest season. Three came back the next year and all had had a child. TMNG was at it again, right? Seducing these not so innocent girls. Or was it the other way round? TMNG, you see, had never been anywhere, had no money, was not well educated and owned nothing, not even a packet of condoms. Yet they had irresponsibly sired these children and taken advantage of these lovely girls. It was TMNG’s fault they were in the bar this time.

There was another girl who started her career in a now defunct Nana bar who admitted straight out that she was dancing to support her younger brother at school. I quite liked her and went home a couple of times with her. She danced all over Nana for some years and even ended up on the Internet in a porn shoot. She disappeared a couple of years ago but by mid ’99 was back at her old haunts. She had had a baby. Who was the father I wondered and she said a half Thai half Japanese guy who gave her baby ‘eye small small.’ He was gone she said. My, oh my, after all those years of safe sex she got seduced back home by another TMNG.

Su was tall and bosomy and had great charm about her. She was an artist, actually, an illustrator with a degree in fine arts. She had had a few boyfriends from university days onward but nothing had lasted. Then, when she was 28, she met a guy. He was unremarkable as far as I could see – we all bumped into one another while I was crossing the big park near where I lived – not quite as tall as she, balding (like me), kind of shy but likeable. A friend of hers told me shortly after she had unexpectedly gotten pregnant. Unexpectedly, thought I. It was simply another case of irresponsible male behaviour. But I was wrong because the guy up and married her. By the way, this case was not Thai – the girl and the guy were English.

Let me close by saying that the oft repeated story of TMNG always comes from farangs who accept as fact everything the girl they are interested in tells them. They have never heard the TMNG’s side of the story and what would be the point anyway since the girl they have an amorous interest in wouldn’t lie to them, would they? There are some other common threads in the TMNG stories related by farangs: the women would rather do anything than have sex with a lot of customers, except for the customer who is championing her cause at the moment; the women are always presented as somewhat innocent about the world, a constant theme in Western romantic writing; Thai women, despite being conscious of their fertility through years of menstruation seem unable to connect it to the fact of penetration by a male might result in a pregnancy although they do know enough not to make love during their period; TMNG is portrayed as not only a man with no redeeming qualities but also as one who has control over the innocent, perversely pursuing only his own pleasure (I like this one because of the suspension of reality for foreigners who have come so far for the same thing).

I have not written this to point out how gullible men, particularly Western men are, about women – I have been down every road possible with women with my foot heavy on the accelerator even on the most dangerous stretches of road. And I have not written it to point an accusatory finger at women as naturally devious, especially women in the bar business in Thailand. But what I am saying is after many years experience in the bar scene and in ‘normal’ romances in the West that there are patterns here. Western men are conditioned to a Western cultural phenomenon known as the Romantic tradition full of all sorts of ideals about women’s virtue. It was invented by men, not by women. Women the world over look at life and love from an entirely different perspective – they have to nail down their security or the targeted man will simply move on. They have a job to do which men do not – production of the next generation. Women are exceptionally clever and attuned to the social relationships between men and women, far more so than men. Thai women, who spend any time with Western men, pick up on their soft Romantic tradition as quickly as a lioness can spot a gazelle dragging one leg. They will be whatever we want them to be and make us everything we want to be for them, if that will get the job done. If you want sweet and innocent, they’ll give it to you. You want to impress them with Mr. Johnson, they’ll moan until even you can’t stand it. Just as in this painting – I was the male who sat still for it – doesn’t really look like me any more – does he look like you? 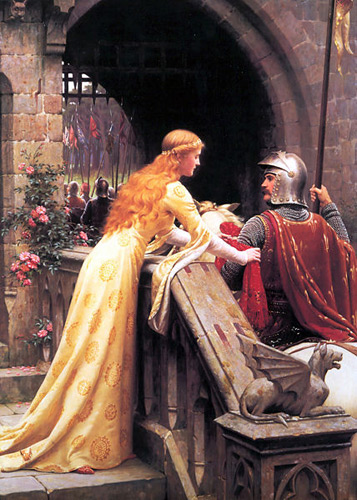 In the story above about the English girl getting accidentally pregnant, you will note the guy did ‘the right thing.’ As far as she was concerned time was passing and she was going to have her babies, so she trapped him. This is our tradition and he did what real men do. This is not the Eastern tradition. And while I am not saying that Thai men are all great guys, neither are they all TMNG. Most of them come from poverty in the northeast and this is a developing country. They don’t have any resources to share. But women will have their babies anyway. I say most of the Thai men are just about as naive as we are and when offered the chance to lie down in tall grass with some lovely, they’ll take it without thinking about the consequences.

And remember, whatever is wrong with woman’s life it is man’s fault.

How Much is Enough