This is the third part of a three part record of my trip to the Philippines. Part One covered Cebu and Part Two covered Bacolod. These are just my impressions, I accept that they may not be accurate.

First thing this morning the tour of Bohol and final hotel on Cebu were booked. I was expecting to start the day trip at about 10 am. The driver is obviously having a laugh as I am given a choice of 7:30 or 8:00. 8:00 it is.

After my breakfast I amble out and decide to go to a Mall to buy supplies and take yet more money out of an ATM (I am sure it evaporates). I confirm at the front desk that there is actually a Mall on Bohol, "Would you like me to book a taxi for you, sir?"

After a quick phone call I am told there are no taxis available and she will try again in 20 minutes. I thank them and ask if they would ring my room when it arrived.

An hour later I go back to the front desk in a not particularly happy mood wondering what is going on.

"Hello, sir." "I have been trying sir, but there are no taxis available." "I could try another company sir, but they have a 25P pick up charge, is that OK?"

No problem says I. I will just be pleased to see a taxi which seem to be extinct on Bohol. Big smile on my face while I am getting cross inside. Needless to say that company does not have any taxis either.

"You could take a trike sir."

A trike is available in seconds.

The route to the Mall in Tagbiliran was narrow and built like a roller coaster track. The trike ride was exhilarating especially when the driver went full pelt down hill just to be sure of getting up the other side. I did wonder if my travel insurance covers me for dangerous sports. I understand why there are no taxis. The roads are too narrow in places and taxis would be impractical in any great numbers on the street. Why did the front desk not suggest a trike from the start?

My impression is that Bohol is far more touristy than the other places I have visited. This must rub off on the local economy because I did not see the obvious poverty I saw in Cebu and Bacolod.

I am starting to understand that like buying a Mercedes in the UK, when buying anything in the Philippines the list price is at best 50% of the final price once the essential 'extras' are added. The tour was supposed to be 2,500P, but to visit Sagbayan Peak was an extra 500P, then every 'attraction' had its entrance fee plus extra charges and tips. The locals most probably tell them to go and jump, but I do wonder if I am singlehandedly solving the Philippines national debt.

That said, it was a good day. First stop was Sagbayan Peak which gave good views of the Chocolate Hills, so named because in the dry season the vegetation on them dies and they go brown. The hills are unusual and much better than in the photos. 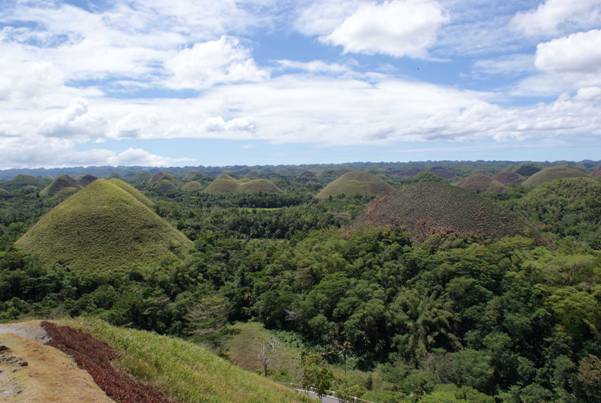 Then on to the official viewing point for the Chocolate Hills. Full of Koreans and Filipino tour groups, the latter usually all wearing the same design of T-shirt to commemorate whatever reason they have all got together. I am glad I went to the previous stop as it had more potential for photos. An Australian asked me to take his and his partner’s photo with his camera. He was well into a long winded explanation, 'mate', about how it worked when I pointed out we had the same camera. Actually not quite true, he had the more upmarket model, but the shutter release was in the same place.

The next site was the 'man made forest'. I would have called it a plantation and declined to take any photos so the car did not even stop. We arrived at the Butterfly Farm. An excellent guide gave an informative talk and showed me around. 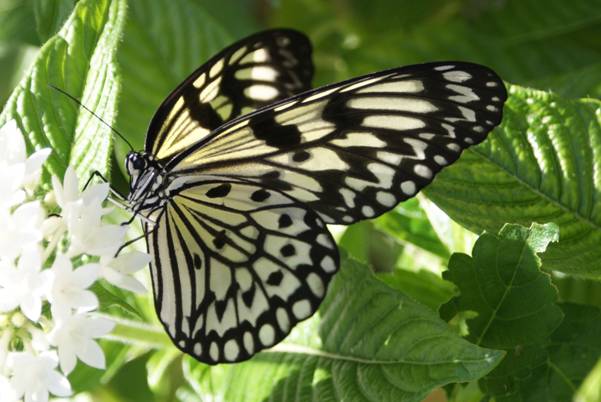 Then lunch – the infamous Loboc river lunch cruise. Except for the fact I was not eating, it was an interesting experience that included both the high and low points of the day. I ordered a fresh coconut to drink. I could have picked one up off the ground, there are enough lying around, but of course "thank you sir, that is 100P". To be fair, for those eating it was a good value trip at 350P.

Then the house band started up. To call them musicians would be an insult to musicians. Even the American military would not have dared use them on the Guantanamo inmates for fear of the international revulsion it would have caused.

Into the depths of my despair came the high point. We stopped at a landing stage and my cynicism rose even higher when I noticed the donation boxes carefully positioned so the diners on board could reach them. Then came an absolutely enchanting display of local dancing. One of the teenage girls was in fits of giggles as she was embarrassed to do it. The finale was an amazing fast moving dance by a man and woman placing their feet between horizontal poles which were crashed together and then moved apart with great rapidity. If the dancers missed a step they would have badly bruised ankles. I happily put a generous donation in the box. 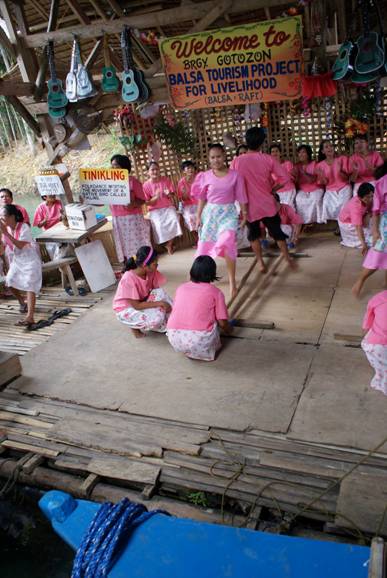 Disregarding the on board 'entertainment', the cruise was interesting. The whole route was lined by lamps which must make an attractive spectacle at night when switched on.

The Tarsier Centre was good, but I suspect it was not the official sanctuary. 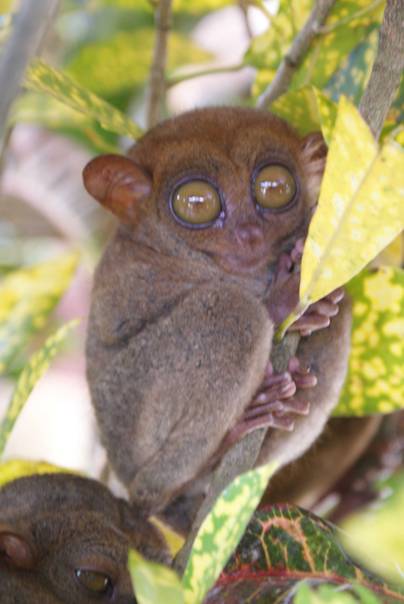 Baclayon Church, not much to report, I did not go in as I was wearing shorts and they had a dress code. It is the oldest church in the Philippines completed in 1727. Unfortunately the best side was only visible as we drove away. I did not ask the driver to stop as I was beginning to flag.

The Blood compact site. Statues which mark the location where Datu Sikatuna, a native Chieftain, forged a blood compact with Don Miguel Lopez de Legazpi, representing the King of Spain. Google tells me it took place on March 16, 1565 and considered as the first "Treaty of Friendship" between Europe and Asia.

On the way I had asked the driver, Dodong, if he could recommend a Chinese Restaurant. "Yes – the Shang Manor". That evening, I hopped in a tricycle (hopped is an abbreviation for undertaking a contortion to get myself in a machine designed for Hobbits) and arrived at the Shiang Ma Nou. Good enough – I assume it was the right place.

On the menu was Fish Lip Soup. You had to go for it, but please nobody tell me it contained real fish lips. I worked on the basis it was a name for some exotic noodle or mushroom. There were a few rubbery bits in it, but I expect it was just uncooked noodle. I also had Chinese beefsteak and rice. The Chinese beefsteak was rather like spam in breadcrumbs, but the soup and rice were good.

Checkout and back on the Oceanjet to Cebu. I leave the terminal ignoring all the touts wanting to take you to a taxi. Then I see the taxi rank and jump in a cab. A tout tries to imply to the driver that he had introduced me and wanted a tip, the driver told him to get lost (I assume that was what he said, I do not understand Cebuano).

Finally I arrive at the White Sands hotel. A bit of luxury for my last night. The room had a huge bed that could comfortably have held three or four. The White Sands is a nice hotel with a large pool. I would not recommend staying at the hotel as it is so far to anything in Cebu City. The traffic is awful and you have a long and slow journey to get off Mactan Island and then back to the hotel. Its only advantage is that it is easy to get to the airport.

Spent lazing by the pool and eating at the hotel bar by the beach until finally catching my evening flight home. 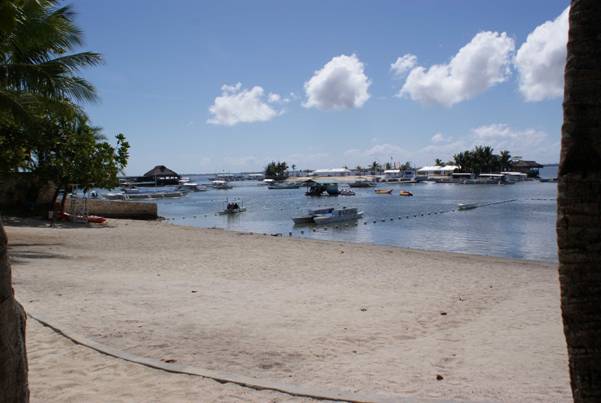 The beach at the White Sands Hotel

I had a great time and I recommend that others try the Philippines. I fully intend to return. During my stay I did not had the craving for potato I had when visiting Thailand, but I could have killed for a nice cup of tea.

Very nice report indeed. It would be nice to see more trip reports from the Philippines away from the nightlife.