A short and chubby man wearing a cheap grey suit, work boots, and a bright yellow hard hat stops us in our tracks. He points to a large sign with Chinese characters that’s looming on the side of the dusty road we are walking on.

“This construction site! Very dangerous! Tourist no enter!” he reiterates with a stern look on his face.

After three weeks of travelling through China together, my Thai girlfriend Dao and I have arrived at one of Yunnan province’s most famous attractions, Tiger Leaping Gorge.

Hǔtiào Xiá, as it’s called in Chinese, is a canyon on the Yangtze River, located about 65 kilometers north of Lijiang City. The canyon is considered by many the world’s deepest river canyon, depending on the definition used.

The gorge is around 15 km in length and passes the towering 5596 meter Jade Dragon Snow Mountain and 5396 meter tall Hābā Shān in a series of rapids under steep 2000 meter cliffs. Legend says that in order to escape from a hunter, a tiger jumped across the river at the narrowest point, which is still 25 meters wide; hence its name. 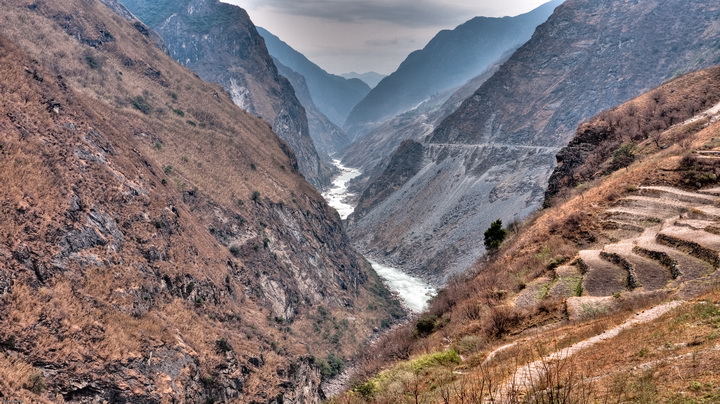 In Lijiang City people we talked to had mentioned that there were roadworks going on in the canyon in an attempt to improve the existing trails, bringing tour buses and more development. However, nobody had mentioned anything about the trails being completely inaccessible.

Fifty meters up the road is Tina’s Guesthouse. It’s run by a friendly Tibetan woman who caters for travellers interested in trekking the canyon.

“Thank you! We just want to take lunch at the guesthouse!” I lie and point at the ugly concrete building up the road.

The man doesn’t look convinced. He noisily clears his throat, spits on the ground, and sizes us up with squinted eyes.

He turns on his heels and walks back to his ramshackle shack. We walk on.

Tina, the Tibetan guesthouse owner, is a somewhat curious woman. Her looks and demeanor remind me of Thai ladyboys. In any case, she also happens to be a good source of reliable information about the canyon. The walls of her guesthouse’s reception area are lined with sketches and maps of the trails leading in and out of the gorge.

“Despite the roadworks, hiking the length of the gorge is still possible” Tina explains in remarkably good English.

“The hiking path on the so-called high road is well-maintained and marked, although sometimes narrow. It is used by the local tribes as part of everyday life. This trail is longer than the lower road, which is a stretch of pavement crossed by several waterfalls, and frequently beset by rockslides. The lower road follows the Yangtze, so there are more views of the river, and a stronger sense of being in a gorge than on the upper trail. As it is past noon already you don’t have time to walk the high road anymore. You would not return before nightfall. You can still walk the low road though, but you have to hire a minivan and a driver to drive you into the canyon.”

“So what about the roadworks” I ask. “We were warned against entering the canyon.”

Tina’s explanations sound reasonable enough. I negotiate the price of the minivan, buy two large bottles of water, and fifteen minutes later Dao and I are on our way.

The ride is very bumpy, yet our driver is in good humor. Dressed in Mickey Mouse shorts and a dirty muscle shirt, he keeps smiling brightly with his incredibly crooked teeth, especially at Dao, and sings badly out of tune to the Chinese pop songs blaring from the car’s old radio. Getting thrown around in the back of the vehicle we speed past heavy construction vehicles, constantly diving in and out of thick clouds of dust. After thirty minutes of this the driver stops and signals us to get out. Gesturing that this is as far as we can go by car, he points to a tunnel in a cliff face a few dozen meters down the road. The entrance of the tunnel is partly blocked by rocks that seem to have come down in a landslide. 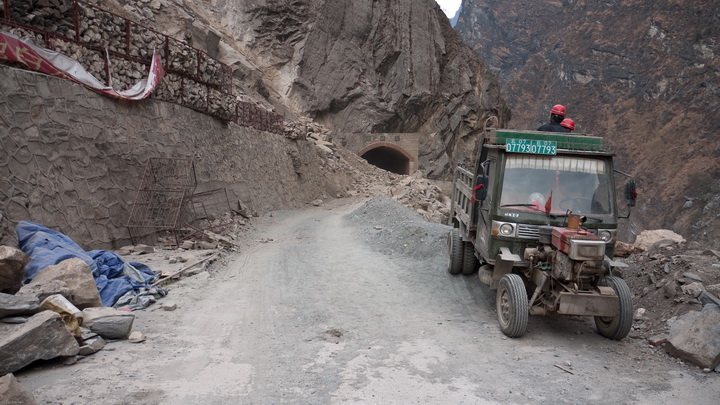 Quickly we climb over the rocks and walk through the short tunnel to the other side. Construction workers pass us and eye us up with a bewildered expression on their faces. Surprisingly, there is no minivan waiting for us on the other side of the tunnel. Our driver has no difficulty reading our minds. 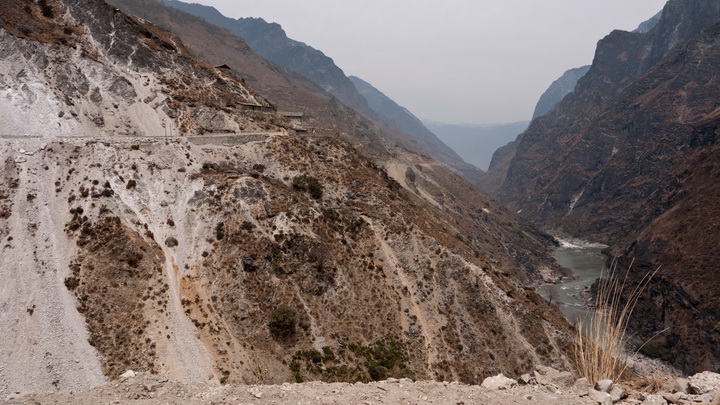 It’s farther than I thought. After thirty minutes of walking along a dusty trail hugging the mountain side we finally come around a sharp bend in the road. We can’t believe our eyes. In front of us the road is blocked by tons and tons of massive rocks stacked meters high on top of each other. Some have the size of a small truck. My best guess is that they were blasted out of the rock face some time ago in an attempt to widen the road.

Thai girlfriend looks at me doubtfully. This surely isn’t what she had signed up for.

“No way, as we have already come this far! Let’s try!”

She has put on a brave face but her voice doesn’t sound convinced.

We slowly and carefully follow the driver across. Despite both Dao and I being fit and wearing good hiking boots, this is not an easy feat. Some of the smaller rocks are not steady. At times we crawl on all fours, the towering wall of the mountainside to our left, and the steep drop-off down to the river to our right. Occasionally there are also small rocks falling down from above. 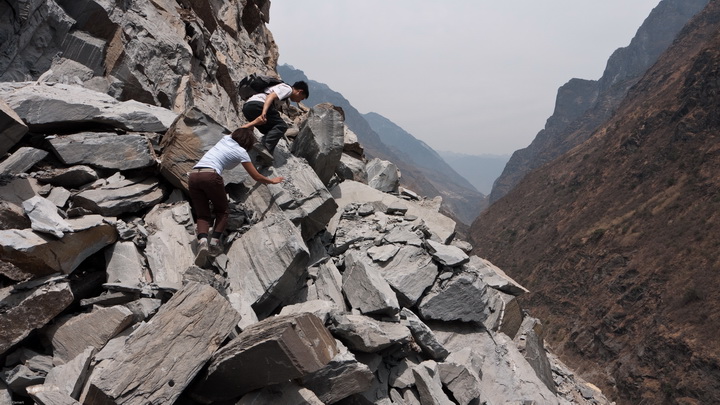 Clearing the obstacle takes about ten minutes. We expect to meet the second minivan on the other side, but that isn’t so.

“We go!” our driver says cheerfully. Dao has an afflicted look on her face.

About 500 meters further along the road the reason why there still isn’t another minivan in sight becomes apparent. There’s yet another obstacle. Other than the huge pile of unsteady rocks we just crawled over, this one doesn’t look dangerous, but only at first sight. There is a steep slope, about 300 meters long, apparently resulting from a massive landslide on the side of the mountain. The narrow road hugs the mountainside at the bottom of this landslide. It’s about 100 meters across. Far above, at the top of the landslide, workers are using heavy gear to loosen rocks from the face of the cliff that consequently slide down the slope at significant speed, bounce across the road and further down into the gorge.

The smallest rocks sliding down the mountain are the size of basketballs, often coming down the slope by the dozens at a time. Once in a while a huge one with a meter in diameter or even more falls down with a thundering sound. 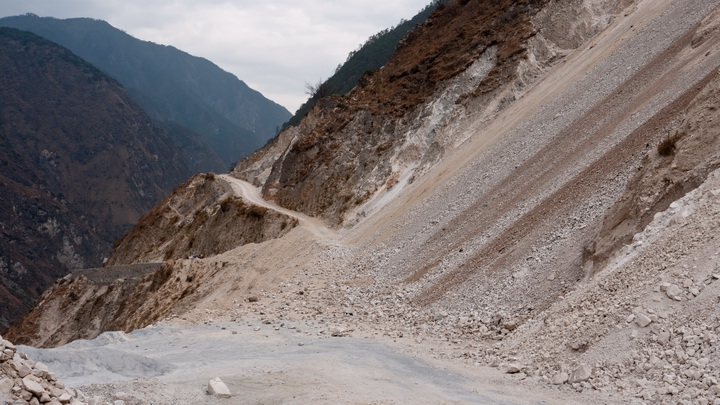 By the time we reach the beginning of the landslide a team of workers cross that stretch of road and the men high above stop their hammering until they are clear. We take advantage of the situation and cross as well, being spurred on by our driver to sprint along the entire way. We would have done so anyway. Even without the workers doing anything on the top there are still small rocks bouncing down while we are running across. Caked in dust, tired, and exhausted we reach the other side where finally the second minivan is waiting for us.

The ride on to the Middle Rapids is as rough as the first one and takes about twenty minutes again. Finally having arrived at our destination we leave the driver behind and hike down a steep trail to the river at the bottom of the gorge. It’s quite beautiful down there, and Dao and I enjoy a few very pleasant hours amidst spectacular scenery. 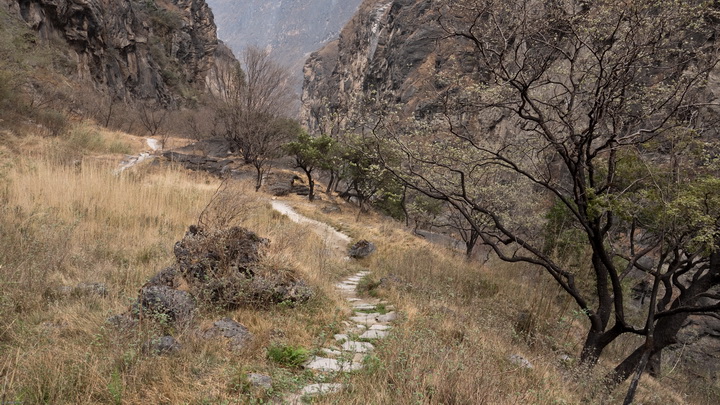 Not before long it’s time for us to head back to make it out of the canyon before dark. We have to backtrack and exit the same way we have arrived.

To our dismay there are far more rocks coming down at the large landslide than earlier, and the workers on top don’t show any sign of taking a break any time soon.

“We go! No problem!” our driver tries to spur us on to run across.

Shortly after he says this two rocks the size of sedans come tumbling down the slope at speed and crash into the gorge far below. The thundering sound of their impact at the bottom echos menacingly.

We hear the sound of a detonation not far away. Workers appear to be blasting rocks out of the mountainside somewhere. Shortly after a thick cloud of dust comes drifting our way. We quickly cover our faces with hankies and duck behind a construction vehicle. What happens to our clothes doesn’t matter to us anymore as both of us are already caked in dust from head to toe.

The sun sets. Our driver is getting nervous, gesturing that we should simply run across. He points at some apparently weary of life man in plain clothes that comes sprinting over from the other side, dodging falling rocks as he is going, as if he set a good example.

Finally, after 45 minutes of waiting, the workers take a break and we can cross, running over the loose rocks that are scattered all over the road as fast as our feet can carry us. Shortly after we clear the obstacle with all the piled up rocks too. 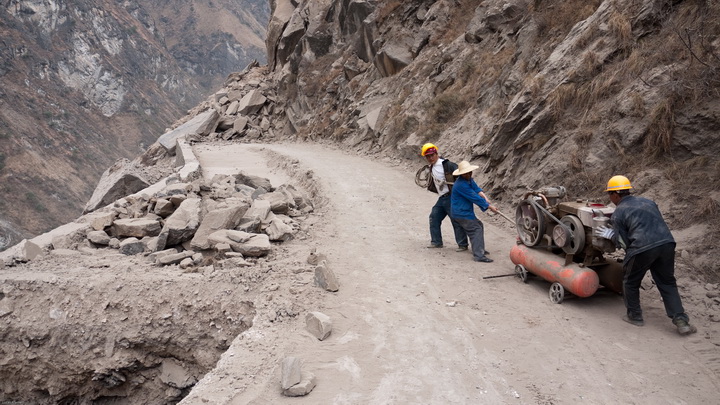 Thinking we already have the worst behind us, we reach the tunnel. We know the minivan that will take us out of the canyon for good is parked on the other side. Yet we cannot pass. Above the exit at the far end of the tunnel rocks are being moved. Again, they come tumbling down into the gorge. 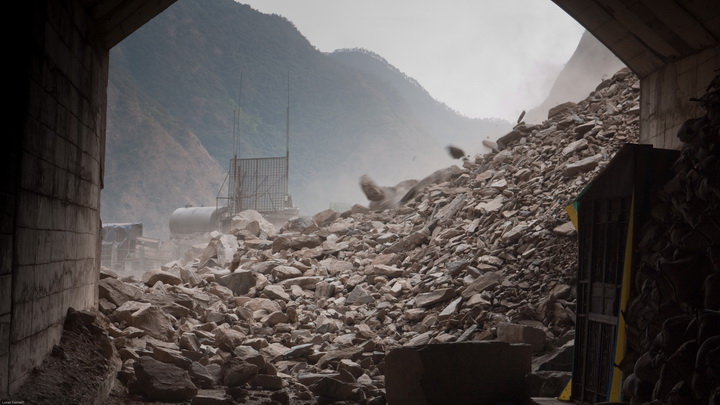 After an additional wait we finally reach Tina’s Guesthouse, relieved that we have come out unharmed.

One month later in Bangkok, Dao invites one of her best friends over to see the pictures of our trip.

“Where can I find a boyfriend who takes me travelling like yours does?” her friend asks somewhat enviously.

They look at the pictures of our excursion to Tiger Leaping Gorge.

“I have changed my mind!” her friend says.

Great story. Sounds like you have an adventurous girlfriend, always a good thing

One Night In Bangkok Where The Grass Usually Looks Greener

Is This The End For The Yellow Shirts?