Mia and I just got back to New Zealand following a month’s visit to Thailand.

This was Mia’s first visit back home to Thailand, since we married in early March 2009, then some weeks later we left Korat to live our life together in NZ.

Our trip started by flying Thai Airways, thus ensuring we maximise that Thai experience from the earliest moment starting with that initial “sawasdee” as you board the plane.

On arrival in Bangkok we headed to our hotel in Sukhumvit Soi 22. Unfortunately the taxi driver could not find our hotel, he stopped on Soi 22 and asked a group of drunks. Of course this action of his still did not get us the desired results. So within just 60 minutes of arrival in the LOS, Mia and I were on the back of motorcycle taxis, weaving thru the traffic, our luggage in hand, taking us to our hotel. Luckily enough I was too jet lagged and knackered to feel any fear at this time. Mia was fine, as she trusts just about everyone and everything in Thailand.

We had two nights stay in Sukhumvit, mainly to acclimatize and get over Jet Lag.

On this visit, I was really surprised at the large number of Hawkers swarming through and around outdoor restaurants and bars within Soi 20 and 22. A first for me, a night time drunk demanding money for alcohol at an outside street eatery – I swiftly told him in Thai to ‘go away, and quickly’

Two days later we flew Air Asia out to Phuket and on to Kata Beach. (We had booked the flights 5 months in advance and had secured return flights for just under 400 baht per person)

I swore I would never return to Phuket again after my first visit, which was to Patong at New Year. Patong was too busy, too loud and too westernised for my liking (fish & chips etc). Mia however, had never been to Phuket and we agreed to go somewhere quieter.

Kata Beach was just perfect, it was quiet, peaceful, tidy, great Thai food and no Hawkers were found anywhere that we went. Interestingly enough all the traditional Thai massage parlours appeared to have very few customers. The girls sitting outside were not doing there usual calling to potential customers walking past, that you become so accustomed to everywhere else that you go in Thailand.

We stayed in Kata Beach, Phuket only for 3 nights, usually I just get plain bored after any longer time spent hanging around near beach resorts (anywhere in the world)

I noted that Phuket still has the strangle hold on customers for transit to and from the Airport. 15 months ago they were charging 500 baht from Airport to Patong, it’s now 650 baht. We paid 750 baht from the Airport to Kata Beach. Street taxi firms asked for 1,000 baht from Kata Beach back to Phuket Airport – we ended up using the Hotel taxi service, (Kata Country Beach Hotel) which cost us just 700 baht.

We flew back Air Asia to Bangkok and then the next day took the inter city bus up to Korat, Isaan, where Mia’s family all live and also in time for Songkran celebrations.

We had 19 days planned in and around Korat. This was April 2010 so it was the hottest month of the year and every day the temperature was over 40 degrees C.

To me Korat represents ‘the real Thailand’ as Isaan is not an International tourist resort destination. This is where I ‘feel at home’ whilst in Thailand. Mia has been most excellent and pro-active at teaching me to speak Thai. Now after 16 months I still try to learn 3 new Thai words every day. Being in Isaan was my opportunity to practice like mad and mingle with the natives as much as possible.

Mia had planned our clothes shopping (we had travelled to Thailand with empty suit cases!) and multiple visits were in order to ‘Big C’, ‘Tesco Lotus’, ‘Klang Plaza’ and ‘The Mall’.

We were not in Korat too long before we caught up with Mia’s old friends and we had invitations to borrow both a car and a motorcycle. I find that the native Thai’s really are so generously spirited. I’m not talking about rich Thai’s, just children of farmers who do down to earth jobs.

The rest of our days whilst up in Korat were spent catching up with Family, eating local Isaan food, shopping and just lazing about because the heat knocks you about so much – that’s for both Farang and Thai’s….

Mia had now been away from Thailand for 11 months since she had got her Visa to go. Meeting the family again for the first time this visit was terrific. Mai speaks to the family 2 or 3 times every week from New Zealand and sometimes even manages to see them on camera via MSN.

Songkran came and we had a blast (of course with water) on the streets of Mia’s local village. Seeing multiple Farang (my friend Richard had also joined us) always draws a crowd and there was no shortage of visitors to the family home. Even more so after the local women learnt that my friend Richard was single!! 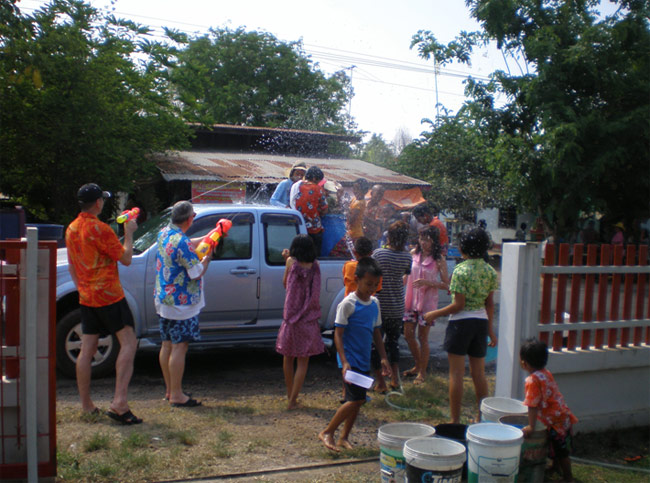 However family is family and Mia has a couple of Brothers and 3 Sisters. Younger brother drinks and drinks and does not know when to stop! Songkran he got very drunk and spoke badly to Mia. Older Brother takes low class drugs and she could see his eyes were vacant. Older sister is recipient to multiple Farang sponsors, is a recidivist unsuccessful business woman who’s new ventures keeps getting her into debt.

So to my amusement during our last few days in Korat, Mia turns around to me and says “You know what? I’m bored of my family and its problems, I’m bored of Thailand and its political problems, I’m now ready to go back to my home in New Zealand.” This came as no real surprise as over our first year together Mia has assimilated into extremely well and adopted the New Zealand life style.

The final leg of our 1 month Thailand visit was to have a 4 night stay at Boh Phut on Ko Samui. This is the only part where our travel plans came apart.

I had left 6 hours to travel by bus from Korat to Bangkok (usually a 3.5 hour journey). So we had planned to leave at 02.00am to get to Bangkok by 06.00am in time to catch the # 43 Daytime Express train leaving at 08:00am to Surat Thani (runs once a day). Unfortunately the whole of Isaan had decided to return back to Bangkok after Songkran on the exact Saturday night / Sunday morning that we decided to. The bus journey took 6 hours, and so we missed the daily #43 train.

We ended up having to go out to the airport (as we found out that you cannot book Internet reserved airline seats less than 24 hours before hand!) and book a one way flight to Surat Thani later that afternoon.

Once at Surat Thani airport we took the 2 hour bus service to Don Sak port and the ferry across to Nathon port on Samui. We wished to do the train journey to see inside ‘real Thailand’. We had to settle for just the bus journey to Don Sak instead. Flying down or train to Surat Thani and then bus and ferry is so much more affordable than flying Bangkok Airways in to Samui – having done this route before I was not keen to pay the sky high prices once again. Although this alternative router takes many more hours, if you have the time it really does offer you and insight into the real Thai life.

Our four nights on Samui were relaxing, we hired motorcycles got around the Island and visited sights (Big Buddha etc) and we did not even get to Chaweng Beach on this visit.

Again we had booked our return flight from Surat Thani Airport with Air Asia, some 5 months in advance – this flight cost us only 198 baht total each!!

So all in all our travel and plans passed exceedingly well and without incident.

We saw the red mob whilst in Bangkok driving up and down Sukhumvit Road – they waved to us, they sawasdee us, and yes in the 30 days we were in the LOS approx 25 people were killed. However we had no frightening moments and felt as safe as we ever do, whilst in Thailand.

We’ll be back, but next time I think we’ll plan to try Thailand in the cooler months of November / December…

It’s Not So Bad