We Shall Not Be Moved

Political protests are not unusual. They take place all over the world, all the time. Sometimes they are successful in bringing down a policy or government or regime, sometimes not. Often they are a one-off, one day demonstration that bring several thousand people out onto the streets. They march, they make noises, chant slogans, wave banners, and then they go home for dinner. 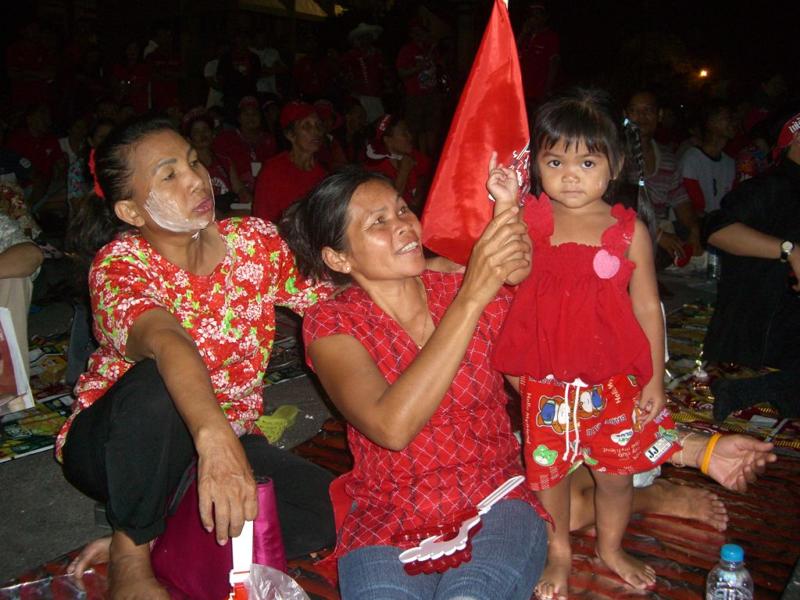 The present upheaval in Bangkok is different. It is nothing less than a revolution which, in my view, is bound to succeed if only because of the sheer weight of numbers rallying against a government that was not elected and refuses to hold an election until many months into the future. Nine months was the time-frame originally given by the Prime Minister, to ‘give the country enough time to prepare’. Then, miraculously, that was reduced to ‘maybe we can talk about having an election in October’. The Red Shirts are not prepared to wait that long. Looking into the future has never been a trait you associate with Thais. Even planning ahead past tomorrow is beyond many of them, so offering an election months away just doesn’t cut it with the locals. 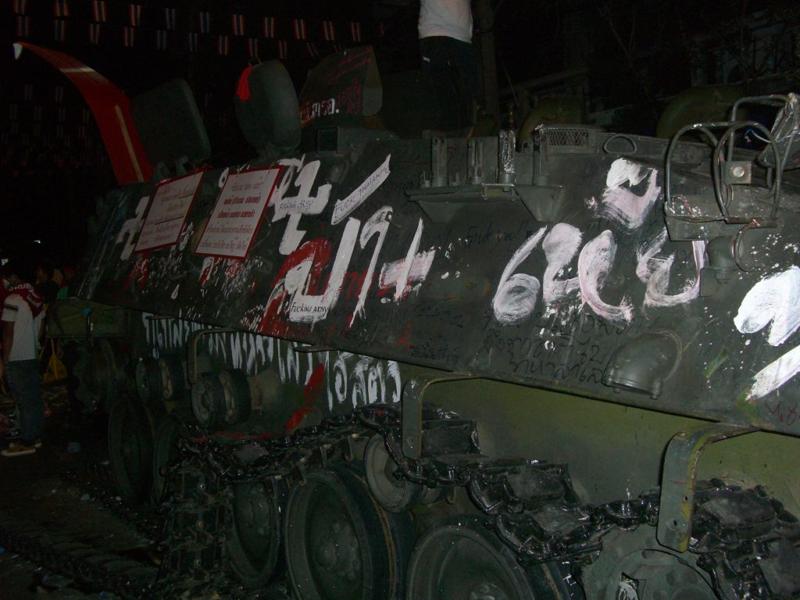 Especially after what happened last weekend, now refered to as Black Saturday. Thailand is known as the Land of Smiles. But that is a tourist board slogan that hides the fact that, like the Japanese in the Second World War, an apparently peaceful people hide a vicious streak not far below the surface. Thais do not like showing their feelings but keep their frustration bottled up until, suddenly, it explodes into violence and mayhem, just like a volcano. Sure they might smile at you, but cross them and, especially, make them lose face, and your life could be in danger. Make no mistake, there is a very violent side to the Thais. And those who feel they are not getting a fair share of the pie are fed up and not prepared to take it any more. In Thailand, many feel that way because the have-nots far outweigh the haves. The divide between rich and poor in Thailand is considered by some as the worst in all of South East Asia, and Thaksin Shinawatra woke up and stirred the resentment that many people felt. We could argue what his motive was in doing that, but he did it. Pandora's Box was opened, and the shut-down of large areas of Bangkok is the result. 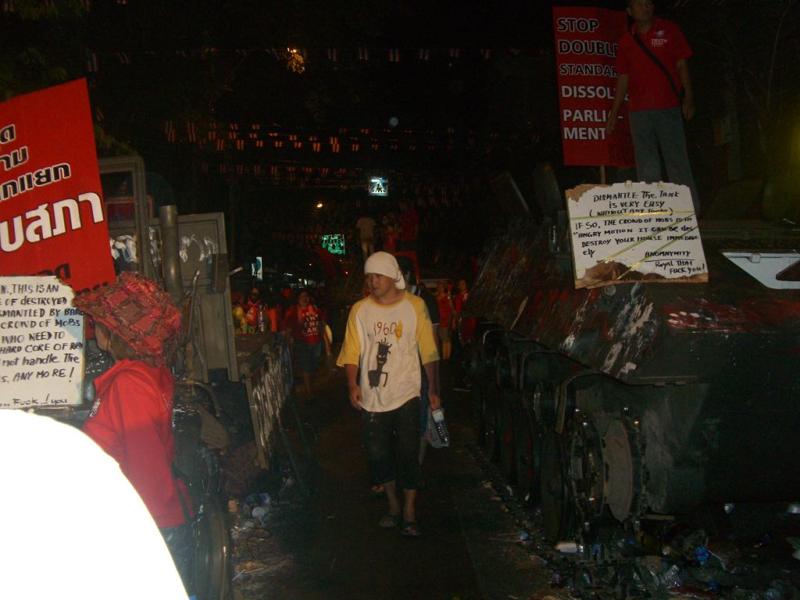 The people elected Thaksin, overwhelmingly, and he was taken away from them. But the situation has moved far, far beyond the desire to return Thaksin – the last elected leader – to power. The main aim of the Red Shirt movement now is simply to restore democracy to Thailand. That democracy is flawed, of course, with many politicians corrupt and in the job for what they can gain from it rather than to help the people. But the people want their say. 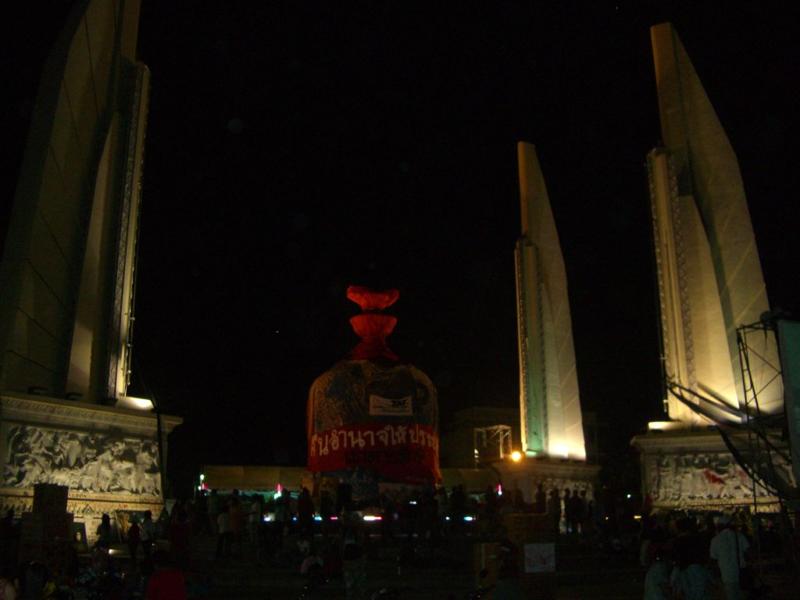 The government has very seriously underestimated the extent of unrest in the country and its ability to deal with it. The attempt last weekend to clear the protesters was quite a wake-up call to them, and the government, police and soldiers were forced into retreat by citizens whose main weapons were nothing more than sticks. These protesters are not, by and large, a wild frenzied mob seeking to destroy anything that stands in their path. A huge percentage of them are women, even grandmothers, who sit peacefully and listen to the speeches (which, hour upon hour, do suggest more than a hint of brainwashing), and they enjoy the musical interludes, and they eat their noodles and drink coffee. And then some go home with many returning the next day, while others that have travelled from remote areas of the country bed down for the night. Sure there were a few ‘dark forces’ or renegades out there in the midst of it, but most of the people involved in rebuffing the police and soldiers are simple people who are angry and determined to have a real voice in how their country is run. 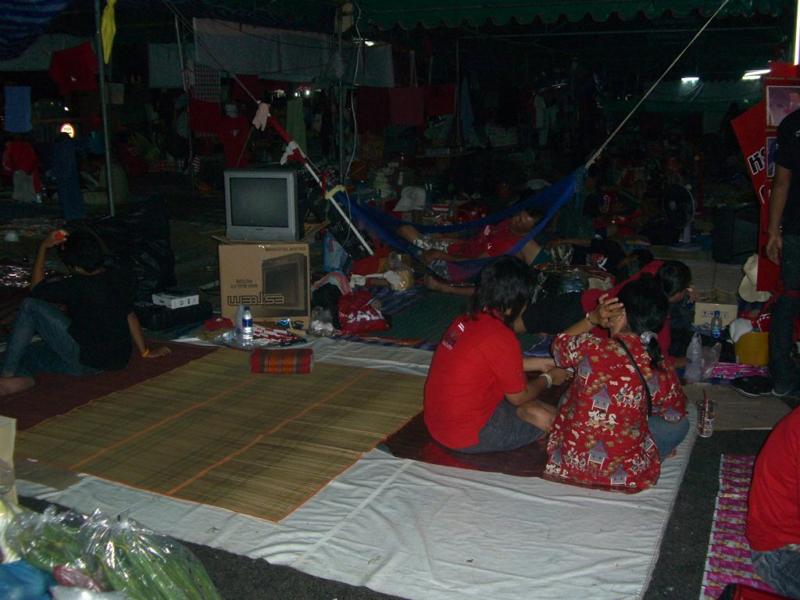 And it is little wonder that the army was beaten with sticks and allowed the protesters to seize their tanks and armoured vehicles and weapons. Why? Because many of those soldiers were probably conscripts, dictated by lot to do two years of army service. And many of those and the full-time soldiers are from the very same regions that the protesters have travelled from and many no doubt sympathise with the cause of the Red Shirts. Same with the police. My own brother-in-law was called down from Kalasin to help control an earlier demonstration, and he brought a red shirt to change into once he was off duty. So what chance did, does, the government have, unless they indulge in a mass shooting. It has happened before in the Land of Smiles, but that now, so far at least, appears to be a step too far for the present government. Once they found there were too many people determined in their cause who would not simply turn and run but instead fight for their beliefs, the government was forced into retreat. It really has been the power of the people in action, perhaps for the first time in the history of this country.

The organisation of the Red Shirt leaders has been impressive to say the least. This has not been a few people deciding to hold a rally and a couple of thousand showing up to listen. It has all been done in the manner of a military campaign. First, somehow, they managed to assemble enormous stages at two major intersections in the city, and no-one stopped them doing so. How that could happen is remarkable in itself, because they are massive structures that weren’t put up in five minutes. Was it typical Thai tolerance, or the typical Thai habit of doing nothing, until it was much, much too late. Imagine Times Square in New York, the entire length of George and Pitt Streets in Sydney, Oxford Circus and the entire length of Oxford Street in London, the intersection outside Flinders Street Station in Melbourne being taken over, with no-one lifting a finger to stop it. Can you really imagine what happened in Bangkok being allowed to happen anywhere else. Just like the takeover of the airports in 2008.

Not only that, but the broadcasts from the stage are relayed by sound and video for at least a kilometre in each direction at the original protest site at Phan Fa Bridge, with people watching on huge screens as broadcasts switch between that location and the other site set up at the Rajaprasong intersection in the heart of the shopping district. They have their own radio station, and they have their own TV station. It was the attempt to close down the TV broadcasts that sparked the trouble at the weekend, with the government deciding that only one voice should be heard, its own. The violence that was unleashed when the protesters marched to the satellite station to get the signal restored was the first real clash of the protests, and that led to the attempted clamp down the following day which resulted in so many deaths and injuries. 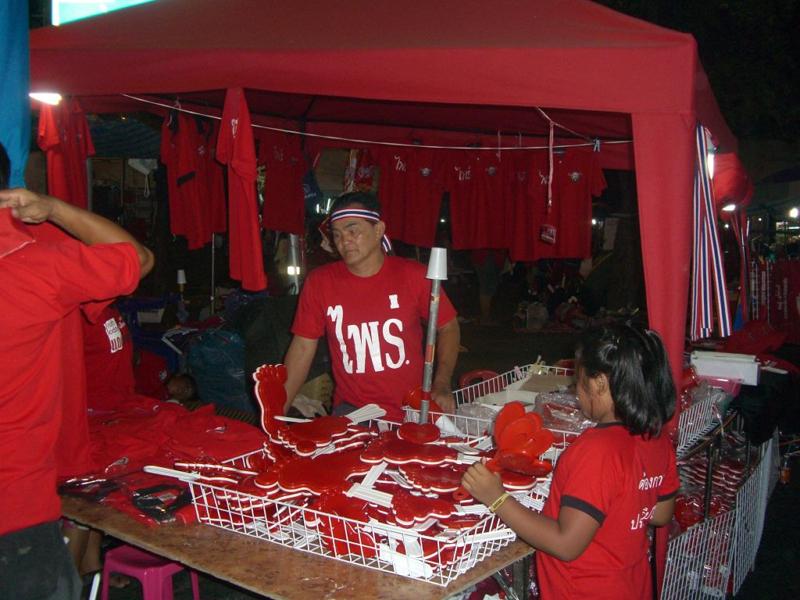 There is more. At Phan Fa Bridge, there are people camped out in the road for, I’d estimate, almost a kilometre both left and right, with shelters erected and food stalls set up (some offering free food) and makeshift showers and toilets provided. There is a first aid station, shrines, countless places selling Red Shirt items such as shirts, flags, hats, scarves and ‘clappers’, a place to sign up as a member (with a long queue), somewhere to buy a CD of photos taken on Black Saturday, a photo exhibition, and right on Democracy Monument itself the coffins of those killed draped in Thai flags where a continuous line of sympathisers wai and pay their respects. There is an anger in the land and it has been marshalled well, and it is not going away. 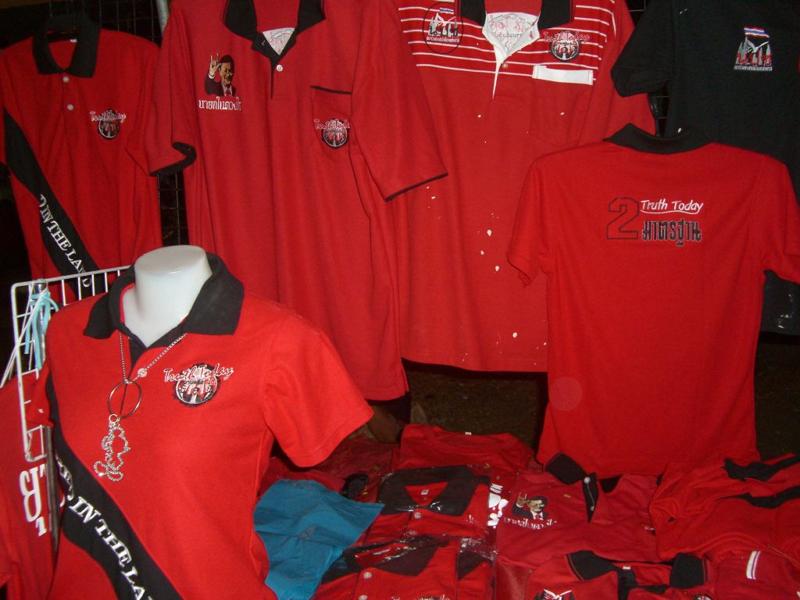 A Night To Remember

Western Women and the Men They Rode In On