Your memories of Patpong made me a bit nostalgic for the old place so thought I’d tell you mine.

My introduction to Patpong was in 1980/81, and was a bit unusual. Aids had not generally been heard of, although there were rumours from San Francisco of some evil disease that only affected gays. The dread disease of the time that everyone was talking about was Herpes. There used to be a joke going round, “What’s the difference between love and Herpes?”-answer–“Herpes is forever.” The words, Perestroika and Glasnost had not yet been coined and Leonid Brezhnev was still Chairman of The Supreme Soviet. I used to work for a company in the UK that had contracts to provide photographic services to cruise ships in all parts of the world. President Ronald Reagan had just dubbed The Soviet Union as The Evil Empire so it is with some trepidation that I found myself sent out to Singapore to join the Russian cruise ship M.V. Turkmenia as ship’s photographer. In the cruise ship business, photographers were known as smudgers, probably because of the work quality we produced after many hours spent dunking films in chemicals, whilst swigging vodka in the pitch blackness of the darkroom of a rolling and pitching ship. Turkmenia was a very small (150 passengers) Soviet Union era, Russian cruise ship, registered in Vladivostok, but cruising out of Singapore to other ports in South East Asia, as far west as The Maldives and as far east as Yokohama. The ship’s passengers were on fly-cruises from Australia, New Zealand and the UK, but the crew were all Russian, mostly beautiful blonde girls with well formed, unenhanced tits and gold fillings in their teeth, working as waitresses and cabin stewardesses. There were also 3 British crew members; (1 male photographer, & 2 female croupiers). At the time I used to consider myself and my colleagues working on other Russian ships unbelievably lucky because the only other guy from our side of the iron curtain in the world at the time that had the chance to screw Russian women was James Bond (the TV. Series “The Love Boat” had nothing on this). 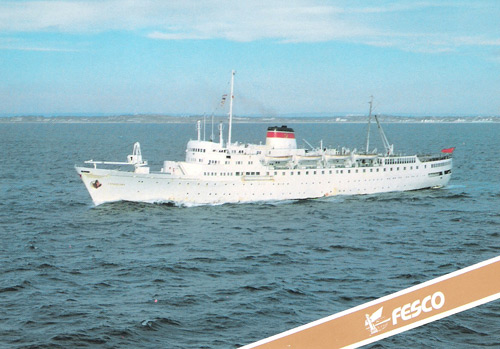 Turkmenia en route to The City of Angels

One of the best ports of call was Bangkok in which we used to spend 4 days every 2 weeks. The advantage of the ship being so small was that, whereas the bigger ships all had to go to Sattahip, disembark their passengers and bus them to Bangkok, Turkmenia could sail right up the Chao Phraya and dock by Klong Toey market. At Klong Toey port gates, was The Mariners Club (I’ve no idea if it’s still there), it had a bar, decent restaurant and a large well maintained swimming pool. A couple of dozen daughters of Siam also used to be hanging around there, and since the other 20 or 30 guys on the ship were Russian, and weren’t allowed ashore without a KGB minder, I had to assume the daughters of Siam were all waiting for me.

After getting off the ship it was in a tuktuk, turn left into Rama 4 road and straight down to Patpong, although the tuktuk sometimes used to go the long way round past Seafood Market & Restaurant (If it swims, we have it), which used to be where Exchange Tower (True Fitness) now stands. Seafood market subsequently moved to soi 24.
In the early 80s, Patpong itself was quite different even compared to the 90s. Patpong 1 didn’t have any market stalls or bag shops; it was all bars, mostly downstairs, but quite a few upstairs ones too. The only bar name I can remember from then was The Pit Stop. It’s not there now but used to be somewhere near where Safari is now. I became quite good friends with the manageress of Pit Stop, her name was Sumalee, and a decade or so later after a long absence from Bangkok, I attempted to find out what had happened to her. Winai of Sawasdee bar wasn’t sure, but told me that Sumalee had met an Aussie guy and had moved with him to the lucky country.

Patpong 2 was also very different in the early 80s. On the upstairs mezzanine floor, above the current Le Bouchon French restaurant and The French Kiss bar, used to be 3 or 4 good gogo bars, my favourite being the Roxy. I bet even now a lot of people have never noticed the existence of that floor, which still has some bars, what kind they are, I don’t know, but they are possibly gay and no place for me. Silom Road used to have a few other pubs that have long since closed down. In those days, the bars used to have to close at midnight and the only place to go after that (to my knowledge at the time) was the Grace Hotel coffee shop, which used to be a terrific place before the Arab invasion of that part of Sukhumvit. I didn’t know of Thermae (wish I had), Nana Plaza didn’t exist yet, and Soi Cowboy would have been subject to the same curfew as “The Pong”.

My stint of cruises to Bangkok ended in late summer 1983, when Turmenia was sent back to Vladivostock to be scrapped, and after bidding farewell to my Russian shipmates in Singapore, I decided to head up to Bangkok for an extended stay before returning to Devil’s Island (Britain). 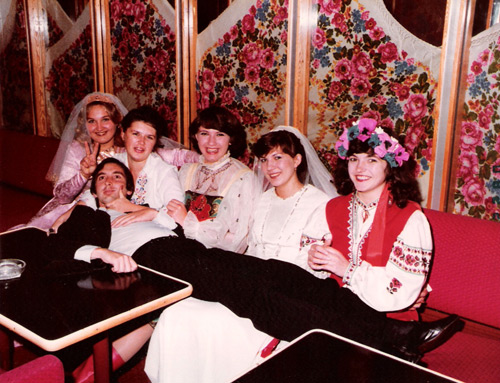 In the clutches of The Evil Empire

I arrived in Bangkok loaded with baggage, and the takings (about 20,000 USD) from the last few months of cruising, stuffed in a brown paper bag. I checked into a flee pit hotel called The King’s Lodge that used to be situated on Sathorn Road near the Aussie embassy. After throwing the bag of cash under the bed for safe keeping, the first thing I did was to go out and purchase an open dated ticket to London on Aeroflot. With that chore out of the way, I was now free to concentrate on my mission of drinking in every Patpong bar; there were a lot more of them in those days than there are now.

My mission was thwarted before completion about 6 weeks later when Soviet jet fighters shot down Korean Airlines 007 over the Kamchatka Peninsula, for straying into its airspace. In the resulting political furor, Aeroflot was to be banned from landing at airports all over the world, so I had to hurriedly get my ticket to London validated and used before the ban came into effect. After getting all my baggage together and just about remembering the bag of money under the bed, which remarkably was all there, and which I hadn’t thought about since throwing it there on the day I arrived, I set off for Aeroflot check in at Don Meaung. As a returning seaman I was supposed to have been given a generous excess baggage allowance but the gate staff said they knew nothing of this rule and insisted on me leaving 2 pieces of baggage behind which they said they would forward to London after I had sorted it out with the airline (I never did get them back). In one of the bags were 3 treasured possessions, a bottle of Mekong whiskey, all my photos from 3 years in Patpong bars, and a Russian tea cozy (Russian tea cozies were objects of beauty). 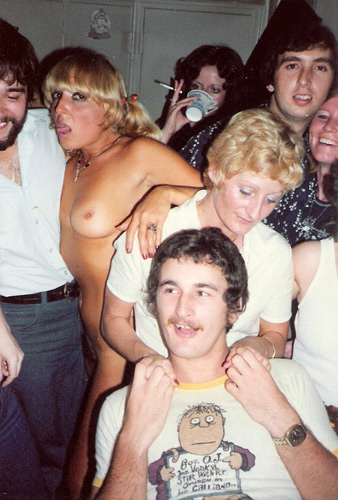 Partying with the crew

My second stint of Patpong memories began in the early 90’s. I had long since given up the cruise ships and eventually ended up teaching English in Tokyo, from where I used to come on frequent holidays to Bangkok. Things had changed a lot; market stalls and bag shops had appeared in Patpong 1, although there were still a lot of bars, just not so many as before. There were fewer raunchy shows going on. Two of my favourite bars were Limelight and King’s Love Boat, which closed down to make way for Café di Roma. Patpong 2 mezzanine agogos were gone but a lot of bar beers had opened up, one in particular that became an expat hangout is still there, it’s called Topless. There were a lot more expats than 10 years earlier all strolling around during the lengthy, early evening happy hours, wearing neckties in the 35 degree heat. Topless bar was a good place to make contacts to get a job in Bangkok. One friend, also an English teacher on holiday from Tokyo got a job as a sub editor on the biz section of The Bangkok Post from a Topless bar bar stool, which in turn became a stepping stone to a much more lucrative job as a securities analyst. During one of my holidays in Bangkok, I eventually got a job as an English lecturer at a well known university south of the Chao Phraya. I made the contact by chance in a Patpong bar although not Topless bar. I can’t remember if the bar was called Supergirl or Superstar, but anyway it’s the one with the life size manikins of Elvis and Marilyn Monroe. I was in the bar early evening one Friday and got talking to a guy who turned out to be a teacher at the university, and it so happened that they were hiring. The following week he brought the university’s teacher H&R guy to the bar to interview me, and a few beers later, I was hired. I moved over from Tokyo in 95 to teach at Siam University, where I taught until 2001, before stopping to do other things.

Patpong is different to the other bar areas in many ways and has an assortment of just about every kind of bar, but it’s in decline and has become quite sad. I don’t go there much these days and even less so since immigration moved, as I used to time my visa renewals and 90 day reporting for late in the afternoon so that I could fit in a few sundowners at the Pong. The demise of Patpong started around the same time as Taksin’s social order campaign, and Bernard Trink’s columns were axed from the Bangkok Post, which I haven’t bought since. I wonder if these events are connected.
Before finishing this post, I want to put a good word in for Russian women. Although I’ve never seen any in Patpong, they are increasingly part of the night scene in other areas. They’re nice women, and although the pole dancers in Pattaya can be a bit nasty when they want to be, it’s understandable when you’ve got Thai cops and various mafias with their hands out.

What will become of Patpong? Nobody knows.

If there's one type of submission I never tire of, it's this. Trips down memory lane are always a lot of fun!