The Road Of Broken Dreams

I don’t know how your biological clock is set, but the little alarm inside my head wakes me up at 5:00 A.M…seven days a week, even on my days off. So, while you are probably still snoozing away in Dreamland, old Sawadee is up getting ready (however reluctantly) for the day. The Quaker Oats man is waiting for me in the kitchen, with yet another steaming bowl of nutritious soluble fiber. Actually, with milk and a judicious amount of brown sugar, it is more palatable than it sounds. While chomping away, I generally go online, check my e-mail, and see what’s been going on in the world. From the headlines, usually nothing good I’m afraid. Most mornings I go to The Pirate Bay, download the latest Daily Show to watch that evening, and then it’s out the door.

At this time of the year the sky is just starting to lighten when I get on my bicycle. With red and white lights flashing away, I’m off down the road. Before 6:30, the streets are relatively quiet, which is one reason I head out early. At the end of my street I have to cross a major highway. I try to time this short sprint before rush hour begins. I really do prefer not to be a target for some bleary eyed Thai, if I can avoid it.

Last year, in order to avoid heavy traffic I started taking a previously untraveled road, which turned out in the end to be the quickest route to my school. It also turned out to have a surprise or two along the way. It’s amazing how many things you can discover in Thailand while pedaling slowly along that you wouldn’t have noticed if you were driving in a car.

Who knew for example that archery was alive and well here? It’s true. I go by an archery range where young would be Robin Hoods practice every afternoon. There are as many girls as boys letting arrows fly towards their targets. I occasionally stop to watch, much to everyone’s amusement. The bows these folks are using are not even vaguely like the simple wooden ones I once used when I was a Boy Scout. These appear to be expensive, high-tech wonders made out of sophisticated composite materials.

From here I hang a left turn down a long hill. I just coast along, knowing that I will pay in full in terms of energy when I go up the same hill later that day. Yes, there is no such thing as a free lunch when traveling through a non-echerarian universe!

At the bottom of the hill I go past the home of The Birdman of Lampang…at least that’s how I think of the veterinarian who lives here. This fellow has an extraordinary number of tropical birds in residence, including, macaws, parrots, cockatoos, peacocks, and others whose names I don’t have the faintest idea of. Hearing the chorus as I ride by, it would be easy to imagine I was in the middle of a rain forest.

As I turn right, I start down what I call The Road of Broken Dreams. I know that may sound contrived, but believe me, the name seems to fit. All along this short stretch of road are dozens of discarded saan-phra-phoom or spirit houses. Some have been carefully laid to rest. Others, often broken, have simply been tossed into the bushes. 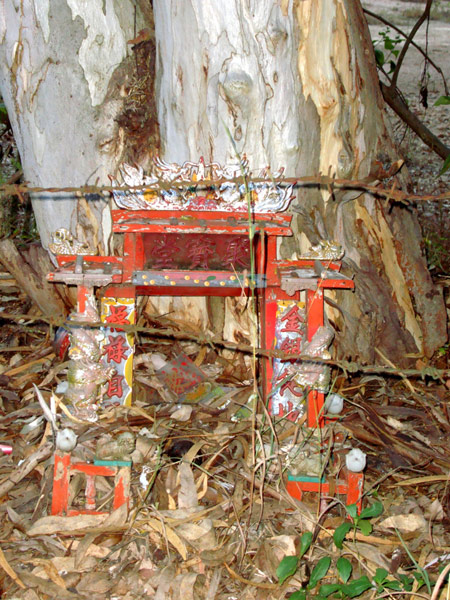 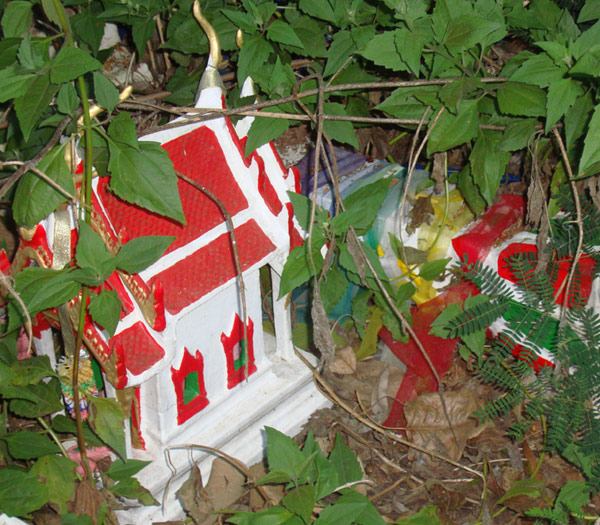 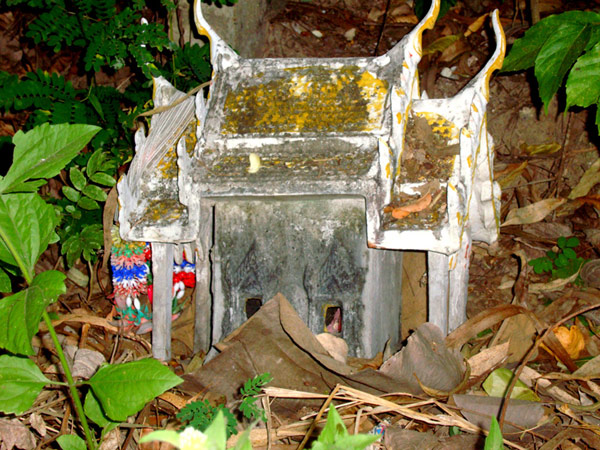 It is a spooky feeling to ride by them. I cannot help but wonder what extraordinary circumstances possessed people to tempt ghostly retribution.

For those of you who have not spent that much time here in Thailand, you need to understand how suppositious the Thai people are. Although Thailand has been dominated by Buddhism for many centuries, animism is still alive and well. There is a thriving amulet business that offers charms for good luck, or to ward off the ‘evil eye”…or even bullets! Even well educated Thais believe in ghosts…and are afraid of them. That’s why almost every Thai home has a spirit house. Everyone wants to placate whatever ghosts are hanging around. My dear wife, although university educated still believes in spooks. Once, when our son was in a cranky mood, she had a shaman come and perform some kind of a ceremony that involved offering a pig’s head. I kid you not! Another time she had me bring out to our spirit house a slice of pizza and a beer. (I confess I later went back and drank the beer!) We set up our spirit house just before the monks came by to bless our new home. It turned out to be quite an involved event. One of our friends hired a shaman who specializes in these ceremonies. It took the fellow, an hour to set out all the flower garlands, fruit, candles, incense etc. 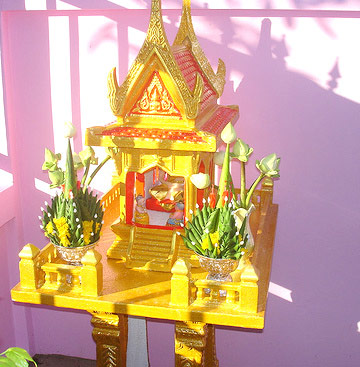 I don’t believe in any ghosts, including The Holy Ghost, but it costs so little to indulge my wife in this stuff. I take it all in the name of ‘real life” anthropology.

Getting back to the discarded spirit houses, I’ve asked a number of Thais what they mean, and haven’t received a single explanation. Everyone claims never to have heard of such a thing…and quickly changes the subject, looking a bit blanched I might add. I think that maybe that don’t to possibly attract the attention any of these particular ghosts.

If I were producing a Thai video music about this stretch of road, I would have many story lines to choose from. A likely choice might show the desperation felt by a young farmer whose true love has just run away with another man. We see him toiling away in the fields during the day, and building a home for him and his beloved in the evenings. During the golden days when life seemed full of nothing but possibilities, we see him setting up the spirit house, standing hand and hand with a pretty young girl. Later, when his world has been shattered, he is left alone with nothing but memories. He turns to drinking heavily in an attempt to forget. But the picture of setting up the spirit house drives him into a furious rage. He picks up the spirit house and throws it into a muddy ditch. We see it being dashed to pieces in slow motion. The last shot of the video shows the remains lying among a thicket of overgrown brambles. Fade away into blackness. Lest anyone think I’m a sexist, this story could equally have been about a cheating husband. There are plenty of those here!

Life often imitates art. Only a few seconds after passing this scene, I come to a pretty Wat on a hill, whose mirrored facets catch the first rays of the morning sun. 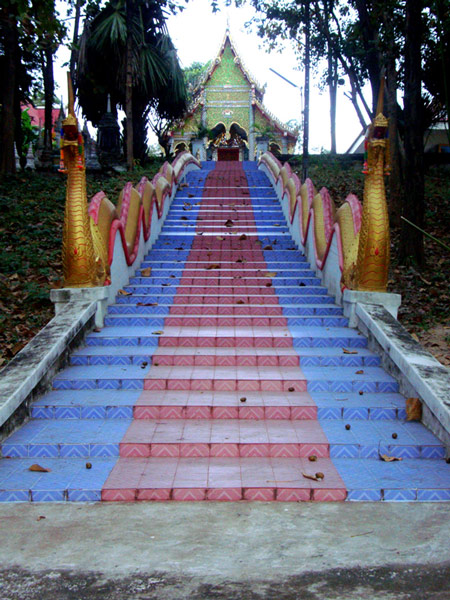 For those of you familiar with Fantasia, think Ave Maria after A Night on Bald Mountain. Of course this being ‘reality” as opposed to a fanciful cinematic utopia, A few meters past the shining temple I ride past the first of not one, but two Love Motels! 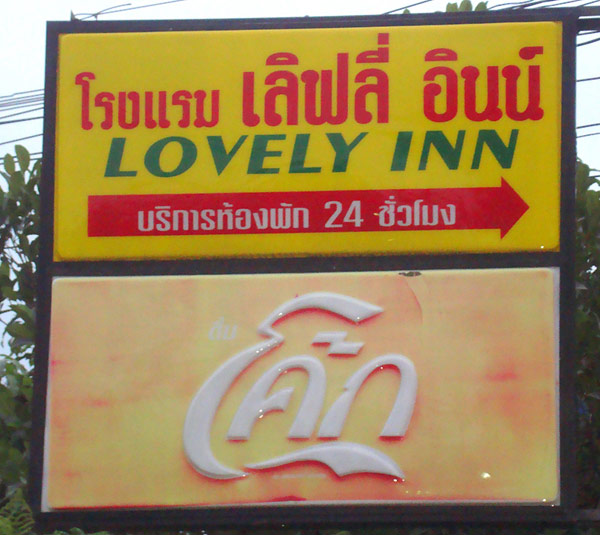 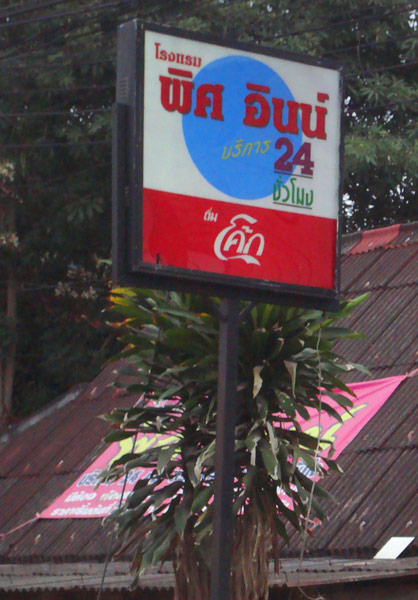 Hmm…I wouldn’t be much surprised to find out that some sweet dreams were dreamed between the sheets in those two places last night…or that some dreams were shattered.

Yeah, you see these discarded spirit houses everywhere in Thailand.

It really is amusing reading your tales of life in Lampang, having visited you there. Nice town it is too!

A Policeman’s Perspective On Thailand