It can happen to anyone although I thought you should know about this and post it to your site as a cautionary tale.

I'm a very experienced traveller, frequent visitor to Nana, speak conversational Thai and am not a newbie to the bar girl scene by any stretch of the imagination. I've been going to Bangkok sometimes multiple times per year since 1989 and am aged 51. On this particular occasion, on January 8th, 2010, I was stabbed by a ladyboy I barfined from Cascade on the third floor of Nana at about 1:30 am in a short-time room right in the plaza..

Here's what happened: I know the reputation of ladyboys and have heard the tales of trouble; hence I've had very few ladyboy experiences but have had some in the past. I always felt particularly safer about taking care of business at the short-time rooms in Nana versus bringing someone back to the hotel (although I've done that too with many of the bar girls) in years gone by. On this Friday night I didn't see anything of interest on the first floor of Nana and thought I would take a walk on the wild side at floor three. I went into Cascade and was speaking with a few ladyboys although none really were to my liking. I was just about to leave when they called over this ladyboy who seemed pleasant enough if not a little business-like but convinced me to barfine her / him as I was about to go. I was breaking my own rules in as much as I failed to have any real conversation and or get to know the person a little before leaving. It wasn't a conscious thought, but 600 baht later I'm out the door of Cascade.

The first thing she asks "Where you stay?" I said I didn't want to go to my hotel but rather a short time room on the third floor opposite Cascade. There also happens to be one right next door to Cascade but he/she said that she didn't like that one (struck me as curious). The ladyboy starts to smoke at this point which really put me off, and most of the girls know not to do this if they're leaving with a customer. My take in retrospect was that she was nervous and knew full well she was about to rip me off.

We checked in to a short time room and went upstairs. I was having my doubts all along because of the smoking but I decided to put it behind me and out of my mind. The ladyboy got undressed and was fiddling with her purse (her back to me). I had my shirt off and shoes off when she turns around and says "YOU PAY ME FIRST!" This stunned me and I instantly knew we were heading down the wrong road. I made the decision then to cut my losses and proclaimed game over and attempted to leave. As I put my shirt on she stood there naked holding a small knife blocking the door and repeated her demands, "YOU PAY ME FIRST!!" Of course you can imagine the dialogue.

First I said, "Put away the knife dear, I'm not paying anything, I'm leaving – thank you very much."

It fell on deaf ears.

I walked over and put on my shoes pondering the surreal nature of what was going on here. I really couldn't believe the situation that was developing. She wasn't budging and insisted "YOU PAY", threatening and shaking the knife.

At this point I'm examining the options trying to figure what to do in real disbelief this was actually happening. I've been with hundreds of barfines in my time and never anything like this. So I offered her a 1000 baht as a tip for her trouble and hoped he/she'd move away. It didn't happen.

"I WANT 2000 BAHT! YOU PAY NOW!!" The tone really changed with her and I thought about punching her out but she seemed pretty intent on using that knife.

I've seen as many karate movies as the next guy and all the tough guys would say "I'd have cleaned her clock" but there was something off-putting about punching what looks like a lady before you and two knowing that if you decided to strike you'd have to make sure he / she would never get up because then she's coming at you with that knife justified in her mind of defending him / herself. It was really a can't win situation. I guess I just didn't want to fight a death match right there and then. It was all just so unreal.

Discretion being the better part of valour, I decided to pay what was demanded but I was bloody pissed in being squeezed to do so. So I threw the 2000 baht to the floor and as she went to pick it up (and on the way out) I pushed her head away cursing at her and went for the door. Unfortunately the left turn I made out the door had me miss the staircase (had I stayed to the right) and put me in a dead end with this screaming he / she coming at me with a knife. It was line a horror movie. I was trapped with my back up the against the wall (literally) so I snap kicked her to the chest to get away not even thinking at this point. Blam, the ladyboy drove the knife deeply into my thigh and the blood began to pour. I was certain I was going to be killed. The rest is just a blur of seeing my hand soaked in blood – then she somehow retreated or I otherwise was able to get past her and down the stairs. In case anyone is wondering what it feels like to be stabbed; the answer is absolutely nothing. The adrenaline was flowing and I don't really recall being hit but the blood flow quickly put a punctuation on what had happened.

The following day (stupidly – I shouldn't have waited) I went to the hospital and after about $500 USD in stitches and treatment later I'm more or less good as new. I subsequently went back to the mamasan at Cascade and told him what happened and they knew who I was dealing with right away. They said he / she was always fighting with the customers, demanding payment in advance etc but this was the first they had actually heard or seen of her handiwork. I was told that she'd be fired but who really knows? I didn't get back my barfine nor my 2000 baht.

As for me; I've sworn off ladyboys and won't ever be in another short time room without some kind of protection, be that pepper spray or a C2 taser (my new weapon of choice). It's amazing that it's gotten to this but as you know the police are worse than the criminals and simply of no use at all. You are on your own and left to your own devices in Bangkok, as sad as that may seem.

As your readers presumably find themselves in a room alone with a barfine they might seriously consider what they would do (and the ramifications of doing it) should they be as unlucky as I and put into the same circumstance. For all the macho guys who say they'd have killed her / him in self defence – is that really how you'd like to spend your vacation, at a police station explaining this? For those who decide I'd really hit her hard; well essential (at the end anyway after being trapped) that's what I did and I caught some knife action for doing so. This is a no-win dangerous game; fortunately your readers will have had the benefit of experience in at least having thought out or prepared for a course of action in advance. This ladyboy had a knife and by God she was going to use it. For all the damage, I guess I'm lucky to be alive. 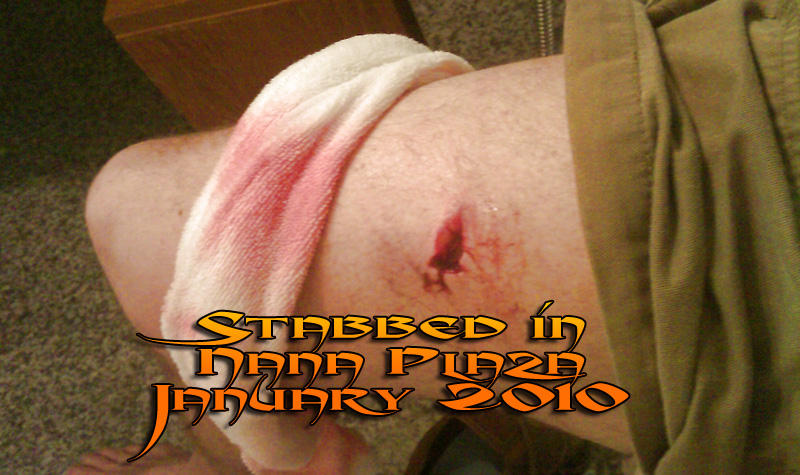 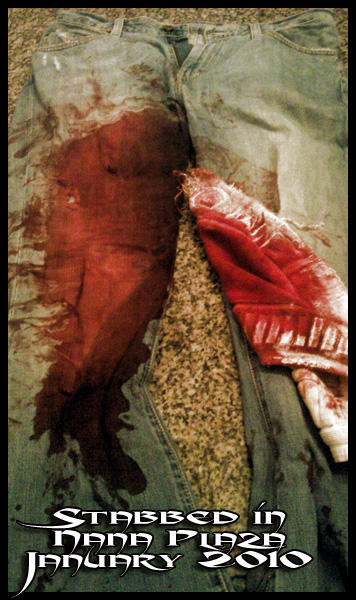 That's a really nasty situation. Ladyboys are a funny lot and they can be awfully temperamental. With that said, this sort of thing could happen with a girl too. Ladyboys don't have exclusive rights to setting on customers, that's for sure!