I was disappointed my last submission wasn't up to scratch to be included into the discussion. I, in my opinion, thought it was the 2nd best submission on this subject. <It was a completely disorganised and jumbled mind dump – Stick> The best submission was not yours but someone closest to you in conditions of living in Thailand, the esteemed Sawadee 2000. I would like to comment on some of your points about how this industry destroys lives as I have seen sad circumstances like this young lady sleeping below. 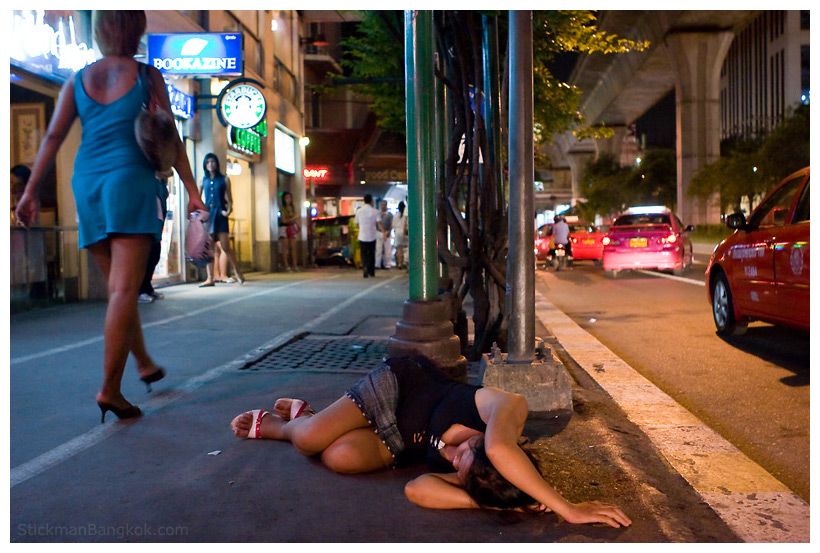 Judging by her appearance she has chosen the wrong type of work as well. She is no less a human being and assuredly deserves to live in a better way than this, but much of that is still her own choice. I will concede that she listened to job counseling from the wrong adviser(s) and this is the result.

I will concede that if the P4P was not seen as an avenue of gainful commerce in Thailand by the locals (including friends and family that encourage poor young ladies like the above) into this "industry" she would not be sleeping there for this reason. She could be sleeping here because the people she cleans homes for will not give her a shed to sleep in like those kind expats that had the Karen girl working for them who you featured in a couple of posts last year. This is not sarcasm, those expats gave what they could and the shed was safer than say an alley and more restful than a lit sidewalk. 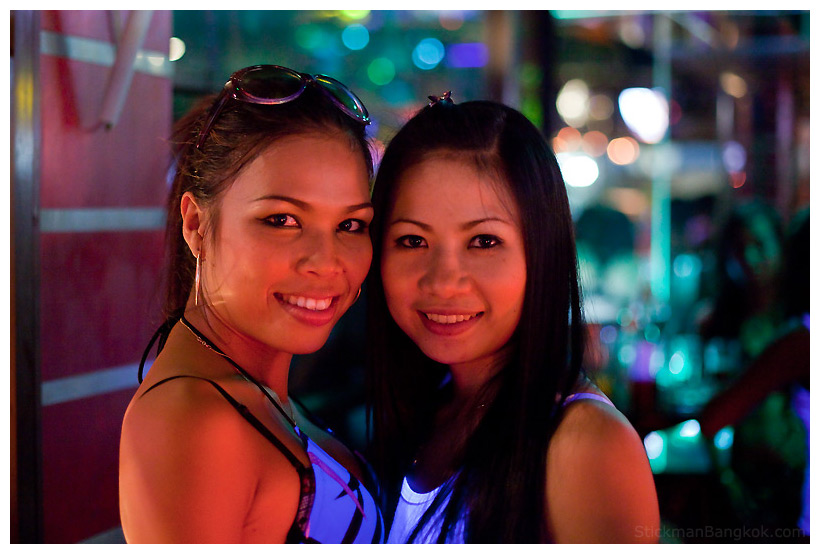 There is in the USA Pinays that can pass a test after getting degreed in the PI may get a work visa to the USA without having to pair up with an American man. It begs for me to add that there are 1) people that aren't temperamentally suited to a structured life of regular work days and hours, day after day, week after week, etc. Farmers daughters' are notorious for finding themselves in the P4P field. I have a sister with a BA that could get certified to teach in quick time but she avoids it like the plague. Instead she received a loan that so she can continue on to get her MA and hopefully find another reason to avoid gainful employment after she achieves the acquisition of her MA. Is there a PHD in English Literature and Theatre? If there is that's the next thing she'll be shilling her family for help with. 2) While there is currently a shortage of nurses in the USA at times we've had gluts of lawyers, electrical engineers, IT workers and now mortgage brokers, financial types and carpenters and general construction people. Each of these gluts have been and will be temporary but having said that prior to this last financial meltdown we had a 4% unemployment rate. It's safe to say that 2-3% of these people habitually and by choice either remain unemployed or work under the radar to avoid taxes or are engaged in illegal commerce.

The ladies whose pictures you've posted in this submission and past submissions including the one I enquired about several weeks ago as well as the one you suggested may be marrying material if she is got to early (she was employed at Secrets in Pattaya, is she still there?) <No, she works in a similar-themed bar in Soi Diana now – Stick> are cute to attractive but I don't see them as high earners in other venues in other countries. I haven't been to Singapore but I've been to Hong Kong, Macau and the pleasure oasis' of the Middle East. The girls there are on par with the hostesses and coyote girls of gentlemen's clubs like Pegasus and Thonglor Plaza. They're mostly Chinese and while they don't have the demureness or gentleness of speech and movement that Thai women have they range from pretty to drop dead gorgeous. They are also willing and joyfully accommodating to multiple sessions in the same day if they're with you LT.

Your typical bargirl would find herself outmatched abroad and so it follows they have a choice of, P4P work in Thailand with its attendant lifestyle, a measure of sanuk / sabai for her and family in exchange for having to spend time with the descendants of parsimonious sheepherders, sausage makers and cobblers or planting crops, watching them grow until harvest, harvesting crops and wondering which young girl the man that impregnated them is going to impregnate next.


The choices, lack of choices and alternatives for bargirls you've submitted in this posting are very unrealistic for someone that has lived as long as you have in Thailand. I think it is a measure of your humanity as well as a regard and respect for all of the hardworking Thai's such as your mother-in-law who has not been consumed by the tides of materialism / consumerism that has grafted itself into the matrix of Thai culture that has the la dolce vita / joie d'vivre ( sanuk / sabai) ethos so common to southern climes in every hemisphere or continent.

What has this submission have to do with morality? I proof read it and it seems as if little or nothing of it does. Reality? Maybe but I could just be rationalizing as a form of giving myself grace. A previous submission a few days ago on this subject was not posted as I affirmed the reality of God Almighty as described in the Holy Bible as well as affirming, as only someone from the southern part of the USA can do, embarrassingly, it seems to cousins from the more enlightened realms of the English-speaking race, that I have sinned and will sin again. Maybe not by mongering, but I will sin somehow in the future. This is part of the human condition and every problem made by humans can not be solved by humans. I may also add that morality and ethics are part and parcel and when separated cannot stand on their own.


These girls give a part of themselves up they don't get back when they rent their time and bodies. If you say "well they're whores", what are you? You may be descendants of parsimonious sheepherders, sausage makers and cobblers but while your spending time with them they apparently make feel as though you're more than that so you should pay them as though you are more than that.

I am sorry but I found this rather difficult to read, disorganised, jumbled and am not even sure what the main point is. As such I cannot make any worthwhile comments.

The Oldest Profession and the Endless Debate