“'Twas the night before Christmas, when all through the house
not a creature was stirring, not even a mouse.
The stockings were hung by the chimney with care,
in hopes that St. Nicholas soon would be there.”

There may have been palm trees along the road to Bethlehem when the Magi were following that star to the manger where baby Jesus was swaddled, but I’m willing to bet they weren’t coconut palms!

Here in The Land of Smiles, Christmas is fast approaching. Artificial Christmas trees are covered in tinsel, garlands and strings of colored lights. Pictures of old Saint Nick are everywhere, and all the employees at Big C are sporting red Santa hats. For a country where Christians make up a tiny percentage of the population, Thais sure have made December 25th a big deal. I suppose it shouldn't be that surprising. Many cultures around the world have a holiday to celebrate the winter solstice…and, 21st century Thais are as avarice as folks in Farangland…so let the orgy of unmitigated commercialism begin!

Actually, things are not quite as over-the top as they are in the U.S., at least here in Lampang. I don’t expect many people to be running up a mountain of credit card debt. Yes, there will be a lot of gift giving between now and New Year's Day, but you probably won’t find mountains of “stuff” heaped under that artificial spruce tree. More likely you’ll find a gift basket or two. For big ticket spending, you’ll have to head down to Siam Paragon or the Emporium in Bangkok. Undoubtedly the hi-so Thais are stocking up on the latest designer gee-gaws or drop dead expensive electronics.

Gift baskets are a big deal here. They come in all sizes and price ranges, from a few hundred baht, to thousands. In the former you may find a tin of cookies and some chocolate. In the later you may find expensive bottles of Johnny Walker or Chivas. Some that are uniquely Thai have things like Brands Essence of Chicken, Essence of Bird’s Nest, Ginseng or other equally yummy sounding things. At least the person who receives one of these knows that the giver wishes them good health. 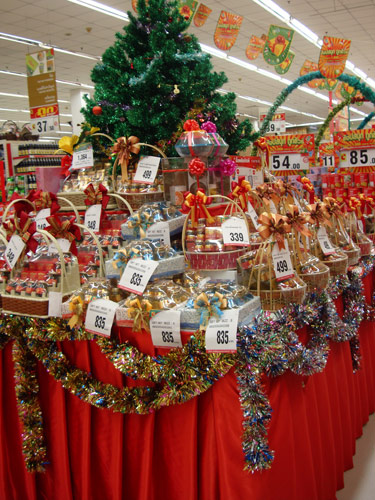 The Thais are extremely status conscious when it comes to exchanging gifts. Heaven forbid they should lose face by giving anything but the right brand, especially to a superior! An equally horrible scenario is to receive a gift from someone you haven’t bought one for.

This year I’ve worked hard on my shopping list. Who did I absolutely have to buy something for? For me, the old adage, “It’s better to give than receive”, rings true. I actually do enjoy giving gifts. In the past I’ve gone to some extraordinary lengths to find “just the right” gift… not that my efforts have always gone appreciated. Back when I was married to my ex-wife, I combed the planet to find an out of print book that we had both read as children, called Danny and the Phoenix. This was way before the days of the internet I might add. My near Herculean efforts paid off though and I tracked down a used copy in pretty good condition. Did Sawadee receive oohs and ahs? Did he receive in fact just an appreciative smile? Did he receive a Bill Cosby-like sweater? Alas, just a lump of coal on my stocking from Santa. Another year I tracked down a copy of her favorite move, My Brilliant Career. Ho-hum! Yes, it is a good thing that it’s better to give than to receive. My children were (and still are I might add) gung-ho on the spirit of receiving. Old Dad is still a sucker you might say, but I still enjoying giving gifts.

My Thai wife, having grown up as a dirt-poor farmer’s daughter has never had much experience with gifts. She never had enough spare baht to buy a Coke until she was in university! When we were first married, I often bought her some lovely things. Her response was always, “You shouldn’t spend so much money!” She is the only woman I know who doesn’t want any gifts. She’d just rather have money in the bank for a rainy day…or more farmland to put into cultivation. She did like the Icelandic wool sweater I bought her, and the down booties. She still has them though almost ten years later. I never told her how much the sweater cost. She would have had a fit if she knew that I spent over $100 on it.

Nothing though has dampened my enthusiasm despite a disappointing response or three. I’m still out there wrapping away for yet another holiday season. My wife, despite her frugality, doesn’t object to bringing some monster-sized tins of cookies to the local school for the blind. That’s become an annual tradition for us.

Last week I went shopping at Big C for things to hand out at school. The display shelves were overflowing with colorful tins of goodies. It’s hard to go wrong with sweets. Thais need their sugar rush! Let’s see: Kit Kats? Sounds good. Assorted fruit tartlets? Why not? Danish Butter Cookies. Thais love them, so into the cart! Onward I went through the aisles with a sense of good cheer that would have dismayed my tee-rak, if she saw how things were piling up. No sweets for the school’s security guards. A case of Chang seemed a much better choice. Oh yes, at least someone would be toasting my health this year.

There was no way on earth that I could buy something for every teacher I work with. Hell, there are almost fifty of them! But I did make some New Year Cards for everyone. I hope they like them, since I fussed for quite some time over what picture to use and what to say. 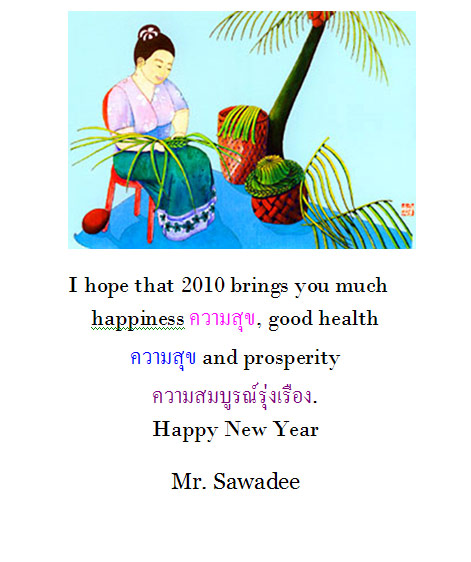 What to give to the Brother Director? I had a brainstorm to create a large poster which highlighted some of the school’s activities. I must say, that for a near total Smurf when it comes to technical expertise, I’ll be damned if the thing didn’t come out quite well! 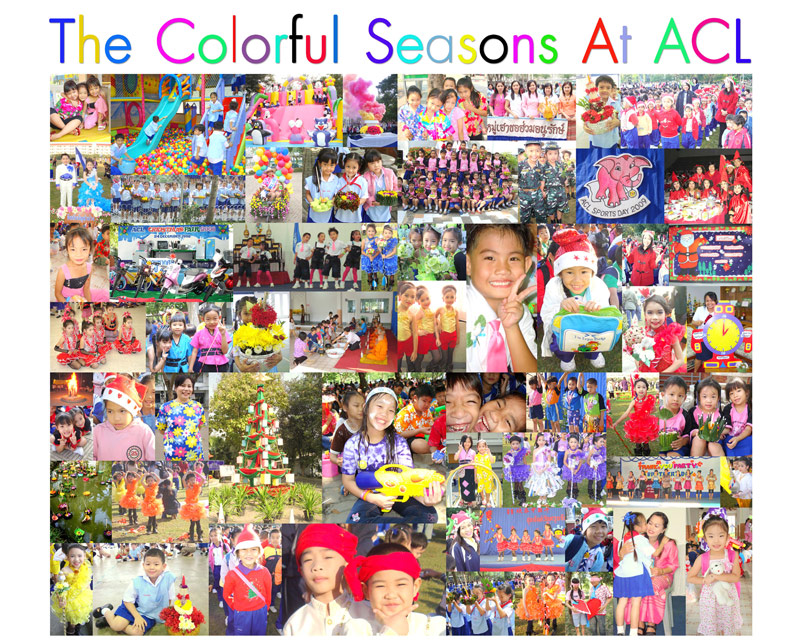 One aspect of Christmas tradition at my school that I could gladly do without is the annual raffle. Last week I saw what I had been dreading; a book of ten raffle tickets on my desk. Participation in this little event is not optional. Five hundred baht was going to be deducted from my salary…whether I liked it or not. 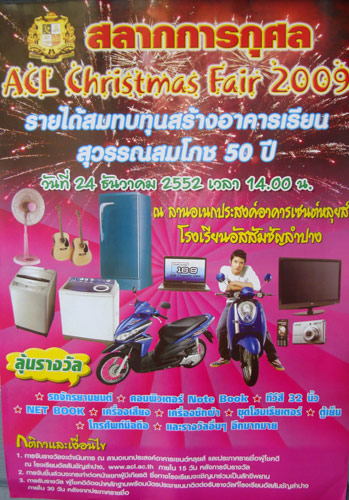 Oh, there are all kinds of snazzy things to be given away, including two motorcycles, an Acer laptop and a net book. There was a refrigerator and flat screen TV. There was a washer and a dryer. There was a camera and a mobile phone…and on and on. It is always a foregone conclusion that Sawadee will not be going home with any of the above mentioned loot.

Well, actually last year I did received a 2009 calendar…which even now is hanging in my kitchen. (Note: if anybody out there would care to send me a calendar without the one and only picture you’ll ever see on a Thai calendar, I would be ecstatic!)

On Christmas Day my school will be putting on quite a festive dinner for us, complete with alcoholic libations. I guarantee that more than a few folks will be going home a wee bit tipsy. I, being somewhat more moderate, will be content with a buzz.

Along with my other gifts, I’ll be bringing along a selection of my home-baked cookies and Sawadee’s World Famous Christmas Stollen. I’ll stack my stolen up against anyone’s! A liberal soaking of my dried fruit in some fine rum overnight doesn’t hurt! While all of you are unwrapping presents, I’ll happily be elbow deep in dough. 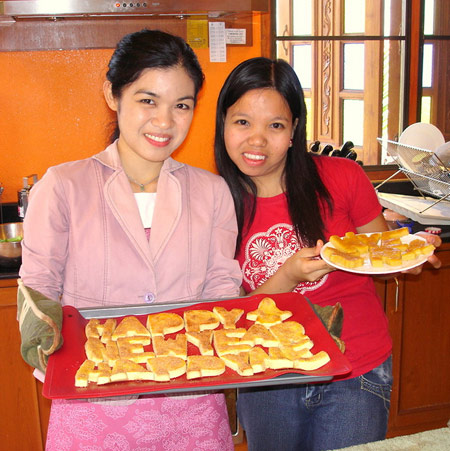 This is the one time of the year that I go crazy baking. Lord knows that I don’t need to eat any of this high calorie, sugar and fat laden stuff…but of course I do have to make absolutely certain that everything is not only palatable, up to my own high culinary standards. All I need to do is give up a few meals here and there and I’ll not gain an ounce!

What do the Thais really think of Christmas? Well I would think that the whole Christian religious business must be somewhat bewildering. My school is run by a Catholic order of Brothers. But the only Christians you’ll find are a dozen or so Filipino teachers. Everyone else is Buddhist. There are a number of large statues of the Virgin Mary around campus. The Thais happily go around waiing them and placing floral garlands on them as if they were images of the Buddha. I guess one small bit of Farang superstitious nonsense doesn’t offend anyone’s sensibilities. Of course Baby Jesus surrounded by some barnyard animals doesn’t seem threatening. It’s only when you start nailing a bloody Jesus to a cross and start ranting about eternal damnation for non-believers that things start getting scary. But let’s forget about that ugly business for now. Let’s instead think about finding a way to really have Peace on Earth and Goodwill to Man in 2010. Thailand, as well as Farangland could certainly use a little of both. I sincerely wish all of you a very Happy New Year.

Thai Food Is A Gateway Drug