Following reference to Mor Chit bus station in Stick’s most recent weekly column (8th November 2009) I commented to Stick on a couple of matters relating– he then asked me to prepare a submission on the subject in the hope that potential tourists and visitors can understand the transport system better.

Without one’s own vehicle, travelling throughout the country to my mind is easiest using buses. Trains are far too infrequent with too few routes, usually very late wherever they go because of single, narrow gauge railway lines. Invariably, too, buses – point to point – work out cheaper than going by train. And then there are the budget air lines which have sprung up over the last few years, such as Thai Air Asia and Nok Air (a division of national carrier, Thai Airways International). Flights and routes served are still rudimentary and more expensive than traveling by inter-city bus.

I have travelled extensively throughout the country using these buses over the last fifteen (15) years. The standard of comfort, frequency, punctuality and reliability is excellent and generally, inexpensive.

In Bangkok, there are three (3) main inter-city or ‘up-country’ bus stations: the Northern Bus Terminal, Mor Chit II, the largest, and providing buses that travel to central, north and north east Thailand. Then there is the Southern Bus Terminal located on a new site in 2008 at Taling Chan, which covers routes to all destinations south of Bangkok and to Kanchanaburi for the Bridge over the River Kwai. Finally, there is the ageing, overloaded Eastern Bus Terminal adjacent to the BTS station at Ekkamai (Sukhumvit Road, Soi 63) where one can take buses to all eastern destinations, Pattaya in particular. Some years ago there were plans to move this awkwardly located bus station to the Srinakarin Road area, somewhere near Seacon Square but in common with many ideas in Thailand, nothing has happened.

Incidentally, and your readers may not be fully aware of this – buses leave for Pattaya from all three
of Bangkok's bus stations, and there is also a direct coach service from Pattaya to Suvarnabhumi airport and vice-versa. Incoming air passengers would need to go to the bottom floor of the airport terminal, take the shuttle bus to the airport's bas station located on the fringe of the site.

Most of the buses that leave the three terminals are government run – whose ticket sales windows travellers are steered to first, but very confusing since most of the destinations are shown in the Thai vernacular. This matter has been addressed to some extent at the newly opened Southern Bus Terminal where many popular destinations are shown in English as well, especially for the more expensive buses – after all, foreigners have more money than Thais, don’t they?

Many of the 'government run' routes are sub-contracted to outside operators, like, for example, the Roong Reung Coach Co. Ltd., who specialise in buses between Bangkok and Pattaya.

When it comes to finding private operators leaving from the three bus stations, one has to do more digging. There is the Nakornchai Tour company and another is Sombat Tours, who specialise in trips to Chiang Rai, Mae Sai and that far northern region, and leaving from the Northern Bus Terminal. Then there is the Phuket Central Tour Co. and Piya Tours both operating from the Southern Bus Terminal. Another prominent company is Thai Transport Co., who have their own web-site but, annoyingly, mainly in Thai; they operate buses all over the country.

At the new Southern Bus Terminal, most private tour companies have their offices on the main road just before you get to the place. The easiest way to get to there is to take the BTS to Victory Monument and then take the new, yellow bus, route 539 which takes one straight there and for only Bt.15.

Since buses to most towns and cities leave at certain fixed times and that seats are limited, it is better to pre-book your seat(s) by going to the particular bus station beforehand to make a booking.

It is customary for you to choose your seat on VIP class buses from a seat map on a computer screen or from a printed page on a clip-board. The system has always worked well whenever I have traveled. For some extraordinary reason it is not, as far as I am aware, possible to book bus tickets from travel agents but this may change when Thailand gets into the 20th century. Let alone the 21st!! One day it might be possible to even book seats on-line, like when booking aircraft seats, but I guess this will take another decade or more to materialize.

To confuse travelers even more, there are four (4) different grades of bus: (a) VIP single-decker buses, often coloured purple and grey, with 24 seats only and space like going business class by air. (b) would be the ordinary, generally blue/white a/c buses which go from point to point (like Bangkok – Pattaya) non-stop. No standing passengers are allowed on either of these categories. Then there are (c) stopping a/c buses, mainly white but with blue and red stripes, which follow definite routes but will stop as and when hailed – very often they don't have on-board toilets. Lastly, there are the orange, non a/c, stopping buses which, again, ply definite routes but take for ever and a day to get anywhere and are often used as unofficial freight carriers. Their seats are generally quite small with little leg-room and having plastic seats for maximum discomfort, especially in hot weather.

For your further edification, each route has its own no., for example Bangkok – Nakhon Ratchasima, vv is 21, Bangkok – Pattaya is 48, etc. Long distance trips usually include a 'free' meal in the ticket price when the bus stops to refuel and giving the driver a comfort break. There are many inter-provincial buses as well, each with their own route no. A route in the south, for example, runs from Hat Yai to Phuket, vv. Most towns/cities have their own bus stations, often focal points in more established locations although the trend is now to locate bus stations on the outskirts of towns. 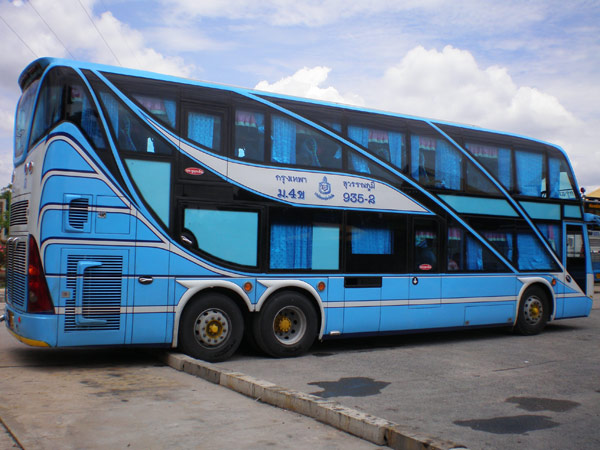 It is true that some privately owned buses on certain routes are cleaner, newer than perhaps Government
buses and my experience is there is no price difference on the same routes, whether private or state owned. The differences take place when you go to other grades of bus which become progressively cheaper as the comfort level reduces.

I attach a photo of the bus I traveled on to Isaan (Roi Et) in June 2009. Bt.389 for a seven hour journey of about 550 km. The bus was almost new, double-decker and most comfortable.

If anybody has any comments, challenges or requests, I would be pleased to have your input.