Flying into Phnom Penh in the rainy season afforded a good view over the flooded river reaches as the plane descended towards the city and its airport. Getting a visa on arrival was straightforward, with one passport sized photo and $20 being passed down a line of some 10 staff and coming out the other end only 5 minutes later.

I chose to share a tuktuk into the city with a fellow traveller. Cambodian tuktuks are articulated cabs attached to a motorbike. I’d selected a guesthouse which was within walking distance of the river. The tuktuk driver said he hadn’t heard of my guesthouse and may not be able to find it, but when he realised that getting paid his $6 fare was contingent on being delivered to the correct address, he soon recovered that particular memory lapse!

A couple of days in the capital is probably enough. I took the longish drive out to The Killing Fields, but personally found the Tuol Sleng Museum more interesting for those with limited time. Tuol Sleng is the school that was converted into a prison / torture centre by the communists. Many of the rooms contain the iron beds used to restrain the victims, and there are many graphic photos portraying the atrocities.

From a traveller’s point of view just wandering along the riverfront and around the side-streets and markets is worthwhile, without having to visit every site mentioned in the guidebooks.

I took the bus to Sihanoukville which nearly demolished every motorbike rider it thundered past. The chap who sat next to me was a Khmer who spoke perfect English. Turns out he had gone to school in England and returned to Cambodia after Pol Pot’s collapse. The conversation made the journey much more interesting, with insights into society and the strained relationship with neighbouring Thailand. The Khmers claim much of Thailand is Cambodia, and the Thais claim much of Cambodia is Thailand.

Arriving at Sihanoukville bus depot I was surrounded by tuk tuk, taxi, and motorbike touts all wanting to deliver me to accommodation. Amazingly they were perfectly polite, explained the price of each option and said it was my choice. I chose the cheapest – a motorbike for $1.

Occheuteal is a good area to stay in. Most of the guesthouses are either next to the beach or within say 10 minutes walking distance. Occheuteal and Serendipity beaches are lined with simple restaurants and bars, making it a great place to swim, eat and sit and watch the world go bye. All seemed to serve $1.50 cocktails – a good price. Restaurant and bar staff were mostly guys who struck up a bit of a friendship with their clients, to the point where it was difficult to patronise another establishment because you were recognised and eagerly waved into their own premises again. At night the fireworks vendors enjoyed a good trade and the sky was usually lit up at most times.

Renting a 100cc motorbike for $6 proved a good way to get around and to visit some of the more outlying beaches. Some of these were particularly local and had no tourists in sight. You just keep on driving out of town past the Port.

In hindsight the choice to take a bus all the way up to Siem Reap (10 hours which turned into 13 hours) was a bit arduous. It may have been better to have split the journey in Phnom Penh. But I did meet a tuk tuk driver returning to Siem Reap on the bus after visiting his family, and I hired him for the next 2 days at $15 a day.

For me, a day wandering around the temples was enough, but I can see that enthusiasts may require several days. It’s $20 for a one day ticket and $40 for a three day ticket. The worst bit was being near a rather obese and loud American woman loudly describing what she was seeing to her travelling companion – the sort of person who talks all through a movie making banal and obvious statements. I resisted the temptation to tell her to shut up.

Quite a spectacular accident occurred just in front of my moving tuk tuk. A car swerved to avoid a motorbike, completely over-reacted and demolished a couple of road-side stalls by careering through them James Bond style. Fortunately no-one was manning the stalls at the time.

Kampong Phluk was a good village on stilts to visit. The boat was $20 divided amongst whoever was on board. This was only me – a bit of a lack of tourists at the time. But it was a fascinating trip for several hours and a real glimpse into lake and river life.

The next day I also visited Chong Kneas floating village. This was a tourist trap – the boat being $20 per person and an unwanted guide jumping on at the last minute, giving an unwanted commentary and seeking an unwarranted tip. Avoid Chong Kneas tourist village. In fact, if you are taking the passenger boat from Siem Reap to Battambang, you don’t need to visit any floating or stilted village. In that seven hour boat trip you will see all the river life you want and more.

Battambang has a few old French style buildings and it’s a good place to get out into the Cambodian countryside. But the real highlight is getting there on the boat from Siem Reap.

The other unique activity is the bamboo train or Norry. These are small jigger like platforms built on bogey wheels with bamboo slats, that sit on the railway lines. With a small Briggs and Stratton type engine they get along at about 30 km/h which feels fast when so low to the ground. I’m sure that at $10 for a short ride, the Norry I rode on was purely for tourists, but these things do allow access to villages without roads. Should you meet another Norry heading the opposite way, it is simply carried off the tracks, allowing one to pass. There’s no chance of meeting a real train – these stopped running a year or so back, and with a complete lack of track maintenance are unlikely to resume anytime soon. 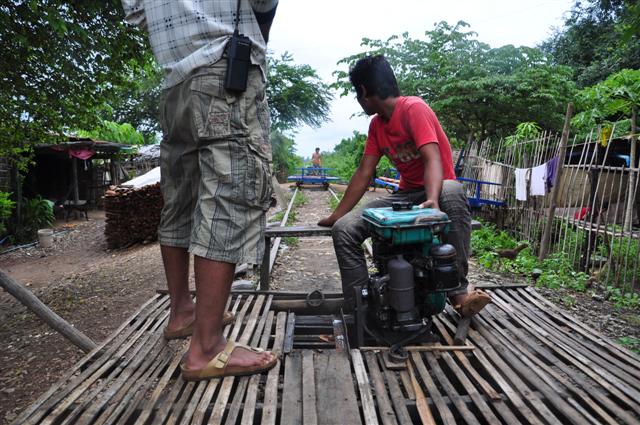 A shared taxi ($5) from Battambang to the border at Poipet completed my Cambodian experience. With four passengers in the front seats and four in the back, it was a two hour journey with me being frozen in the one position unable to move.

Cambodia was a great place for a slow-paced holiday. Crossing back into Thailand though, I could see benefits in relatively (?) predictable traffic movements and buses that averaged say 80 km/h.

Sounds like you had a nice time and I have to say that Cambodia is a place I always enjoy visiting. Nice photos too!

Japanese Girls And Their English