My wife is from the south of Thailand, not to far from Surat Thani near a town on the eastern coast called Kanom. After being trapped for months because of construction on our house in Hua Hin we hit the road shortly after the (promised 20 day) construction
of our carport that took over 2 months to complete. Got in our new rice bucket (Honda Jazz) (our first long trip — Thanks Stick for the encouragement to get some
wheels in your weekly) and pointed it south for 5 and a half hours until we arrived at my wife’s
family home in what I refer to as the jungle. The last part of the journey takes you from 4 lane highway to two lane main road to much narrower road then on to the dirt and gravel through Palm Oil tree plantations, coconut groves, the thick dark
area under the Rubber Tree Plantations and lots of other “bits and bobs” as my UK neighbor calls them. The road has been “repaired” from the last time I was there when there were deep ruts that would have made it difficult
for my rice wagon to navigate over 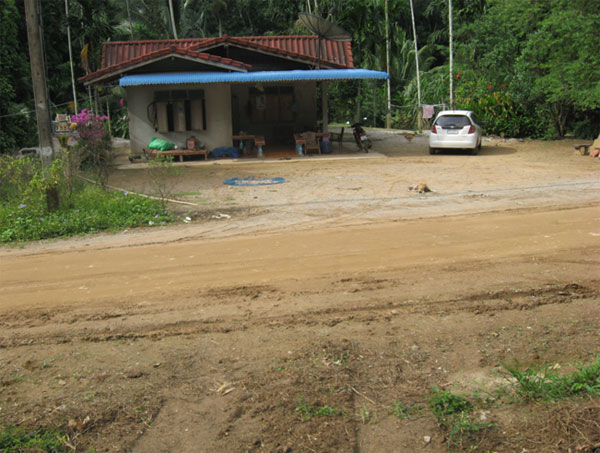 My wife didn’t want me to show this picture but I think the house is quite nice for the area. Mommy’s house has been upgraded by most of her 9 kids to now have running water to the bathroom (for the big cistern), a stainless steel outside
double sink with running water, a refrigerator, induction hot plate, couch, beautiful tile floors and porch.

On the first morning before eating breakfast we went to a very small village “fresh market” to bring food home for everyone. Wife almost forgot where it was as it was off the main street and down a side street. I have seen a lot of fresh
markets and this by far was the most interesting and rural market I had seen. If I had only thought to use my cell phone and take a picture.

Later in the day we went into the town of Kanom which consists of two developed areas along a main north south street that are a few kilometers from each other. Won’t find but one or two farangs there as I certainly got my share of stares. Just
east of Kanom starts one very long beach that starts on the north end with a public beach where the Thai’s go with the covered tables on the beach side and food places on the other side of the street. This one or 2-3 kilometer long beach
is for the most part sparsely populated but dirty showing all the respect Thais have for their beautiful natural features.

Traveling further south and going over a hill you enter NiPali (spelling?) beach area which has many of tourist cabins and one large hotel. Getting a reasonably priced place to stay is not difficult. Next door to the “One More Beer” restaurant/bar/hotel
is a small place that had two rows of individual cabanas that were fairly new. We were quoted 800 baht per night but wife told them that a friend said it would be only 700 baht. We easily got the 700 baht rate and learned there were only 2 of
the cabanas occupied that evening. Oh is it slow there now.

Off to explore the very nice and clean beach was truly a pleasure. The tourist nature of the area and the hotels, kept the beach relatively clean.

The next day we were off to take the rice bucket to Koh Samui on the ferry. The little Jazz was dwarfed by the pick-ups and large trucks on the ferry. Arriving at Koh Samui, which my wife had not been to in eons we found the atmosphere quite different
from quiet and relatively undeveloped area we came from. Koh Samui was very developed with lots of new buildings, resorts and restaurants all around the island. A loop around Lamai and we quickly discovered that this must be where the bar scene
must be the hottest. Parts were like driving through Pattaya with farangs everywhere. This island was definitely farang territory seeing them everywhere. I am sure many visitors to this site are familiar.

We continued our search for a place to stay with me trying to drive and avoid all the hazards of driving in Thailand (especially when you're still getting used to driving on the left side of the road—Yes, from the U.S.) and my wife searching
the sides of the road ahead. After several false alarms we finally decided to go down a street that headed towards the beach that had a sign that said Koh Samui Resort. Went down that narrow street several 100 meters and came to the beach with
no resort in sight. Turned around and low and behold there was a small sign at an intersection that said KOHSAMUIRESORT. Drove in and saw some larger units on one side of the property and smaller units in a row on the other. Had to search to find
someone to ask the price and was told 500 baht per night. We saw later that their listed price was 700 baht but we were the only visitors that day. They later told us that business had been very slow. The room was almost exactly the same as the
one in NiPali beach. 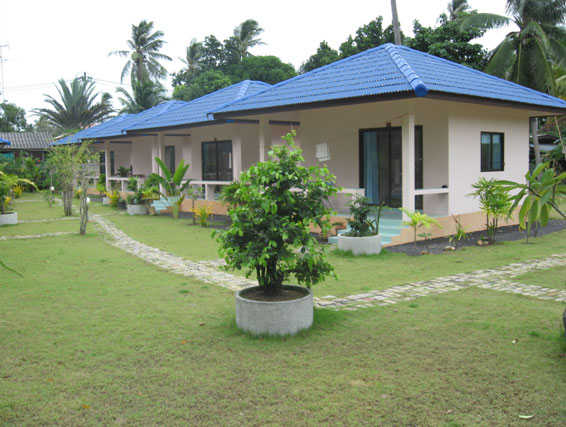 This place was only 100 meters from the beach. Unfortunately, most of the beaches we saw in Koh Samui had nice sand by the land but many rocks when you got out by the water. Not the pristine and beautiful beaches I had visions of when I thought of Koh
Samui.

The most fun we had on the island was after checking into the “Resort” we continued our drive/tour around the island. We did not fix any checkpoints to remember the small soi to return to our “resort”. The last 30 minutes as
darkness had set in we were both straining to look at the right side of the street in an attempt to spot the sign we first saw that led us to the “resort”. After some anxious minutes we easily recognized the sign and returned to
our room for the night.

The next day we circled the island again and drove towards the ferry port missing the last right turn to the very large parking area the first time we past it. Oh the ferry ride was again one of the slowest boat rides I have ever been on but one hour
and 30 minutes later we were again on the mainland.

Went to visit one of my wife’s high schoolmate friends. Her friend's husband came home and piled us all in his 4wd truck and we were told we were going to see some sights (as he stopped by all his friends houses to say HI along the way). When
we got to the old Koh Samui ferry pier we turned right and headed off up the mountain and around the other side on a very interesting cement and dirt partly 4wd road until we came to the most beautiful bay I have ever seen in Thailand. A picture
postcard bay a few kilometers long, clean and a medium size resort huddled on the near end of the beach. We were invited out to tour the resort which was a series of Thai traditional wood huts with beds and fans in the room and a complete bathroom
in a separate room just outside the front door. An rustic looking and beautiful resort. No TV, No AC but everything else you needed to just lay back, relax and unwind. We were told the smaller rooms we looked at went for 1,000 baht/day which we
though was a bargain considering the surroundings and isolation. Oh, the beach was spotless and sandy all the way to the water. Appeared like a few small fishing boats at the other end but nothing else anywhere to be seen but coconut trees and
sandy beach. I only hope that next time we go back to visit wife’s mother we can spend a day or two there. Yes and where was my brain when I wished I had my camera all along having my cell phone camera on my belt.

From there we went back over the mountain to a small remote fishing village where I was definitely out of place. Wife’s friend’s husband was looking for someone to take a group out on a boat the next day for a trip somewhere. Oh the people
that came out of the woodwork during the conversations. There was now some activity for several minutes that broke up the monotony of the day for many of the loungers.

Next morning hit the fresh market to get food to bring to mom then off to one of wife’s brothers house and garden a few km down the “jungle” road. By this time I had finally figured out I had my cell phone camera to use. These people
in this area all have these gardens around their houses where they just go out and pick the fruits they want to cook and/or eat. 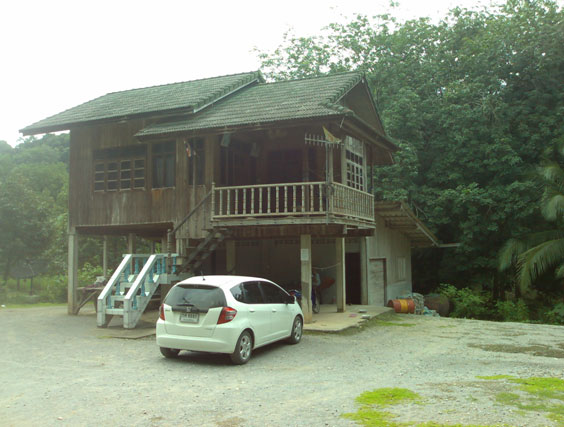 Brother's house down the road. 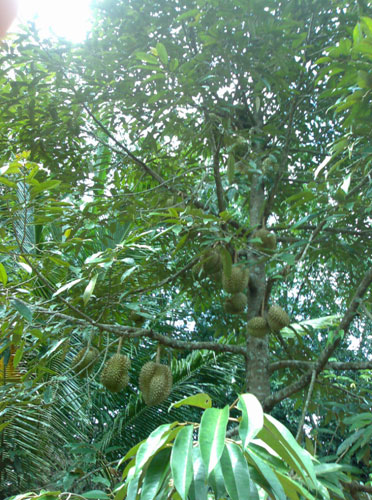 Durian—the (smelly) King of Fruits. Favorite of the Thais 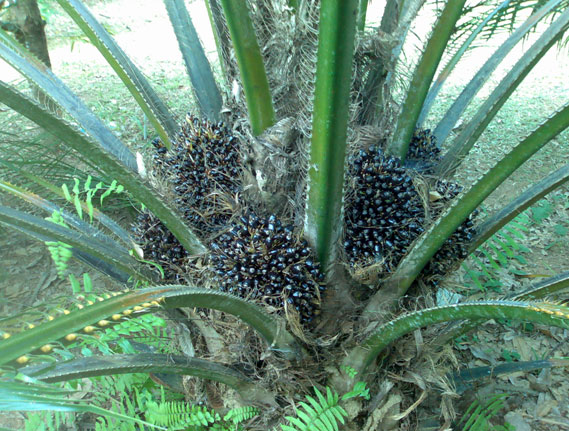 On our way back I learned the way the Thais like to show off to their friends. We had to load up on durian and all kinds of other fruits from the roadside stands on the 5 + hour trek back home. I would later learn the purpose of this is to distribute
the “valued” fruit to her friends back in our neighborhood. Its this share mentality that keeps the Thai communities together.

No trip would be complete without being stopped by the men in brown. I had taught both Driver Education (classroom) and Training (behind the wheel) when I was teaching but Mr. Brown got a new one on me. There was little traffic on the road at the time
and I was driving in the right lane. He informed me that you're not to drive in the right lane when there is no traffic but move over to the left lane. A new one on me but wife talked him down from 500 to 200 baht so greased his palm and
off we went. This may be my first time but I know it won’t be my only one.

There are many great beaches to be found in the south of Thailand outside of the major tourist areas. You just have to get someone in the area to lead you to them. It should be more interesting on our next trip south. If I can only remember to use my
cell phone camera to take pictures, could have an article about the secluded beachside resort we were shown.