The Story Of Deng Part 1

I last spoke to my Thai wife in 1992. Her name was 'Deng', Latanar MXXXXXXX I think was her name on her ID. We had been married for 5 years. I had just sent her 75,000 THB from Taiwan. According to her that was not enough, she had got in deep with some bad people who were going to take her land, and they had her passport.

Her last words to me from a phone in Kutchum, near Yasothorn, up in the North East were "If you don't send me the money right now, I am going to kill Ohdan!"

This was the moment I had come to. The moment that would define me and decide whether or not I would continue down into the abyss that people like 'Brokenman' seem to find themselves.

Ohdan was my 3 year old daughter. The money Deng needed right now was 250,000 THB <That is $US10,000 back then and that was a HUGE amount of money back then. Why on earth did she want that much? – Stick>. I was doing very well teaching in Taiwan. But not that well, and only the top 1% do. I didn't speak Chinese and had arrived the year before with 200 US$ in my pocket. I had done well, but not that well, and it had all gone back to Thailand. Like the money I had earned in New Zealand, the thousands of dollars earned in Australia, and money borrowed from friends and family.

I could say I loved my daughter but since her birth had spent so little time with her and I was closer to the children I was teaching in Taiwan. I didn't know anything about her.

Here it was, that 'one long ten second pause' in my last conversation with my Thai wife.

I held my breath, and exhaled, "Kill her then!"

I did not hear the next thing Deng said. I was watching my hand replace the receiver. The adventure was over. The nightmare drawing to a close. I sat on my bed and cried harder than most grown men ever do. No going back. It was done. I was in a country I did not particularly like at the time, doing a job that was neither something I liked nor wanted to do. I had overstayed my visa. I had no money. I was in a foreign land with no real friends.

The nightmare continues some nights. I wake up after the strangest dreams, where I have been talking to Latanar, visiting some place that looks like Kutchum, a bamboo hut on Nai Harn beach, or Khao San Road. Somewhere in the back of my mind there is a nagging unfinished business. In the dreams Ohdan is still a child, and sometimes Latanar is still pretty.

I know lots of people reading this will jump to the conclusion that I am heartless, perhaps even evil, and will want to tirade about how a wife deserves more. I should have tried harder and all manner of solutions. This is why I begin my story here.

If this is posted on the Stick, it is a good place to let you all in. Some of you already know where I am now, because you were once there too. I still think about Thailand a lot. I will never go back. I see it for what it is, see the people for what they are. I lived there on and off from 1985 to 1991. Like all places, I had good and bad to say about everything I experienced.

In 1989, I had a teacher in Melbourne who came from the North East, in fact just 70 km from Kutchum, who was a Thai monk. I probably owe my salvation to him and him only. I met him by chance and in that 7 month working stint in Melbourne, he taught me how to speak parsar Lao.

I was working seven days a week and living in lodgings, sending everything back to Thailand. At night I waited outside the wat, and the monk came and gave me a lesson in speaking Isaan. At the end of the seven months I could understand pretty much everything I heard, and could say pretty much anything I wanted to say. I never told my wife I had taken the lessons. It was going to be my surprise. I had tried learning Thai, but every time I went back to Kutchum found it was pointless. Everyone there used parsar Lao to converse. 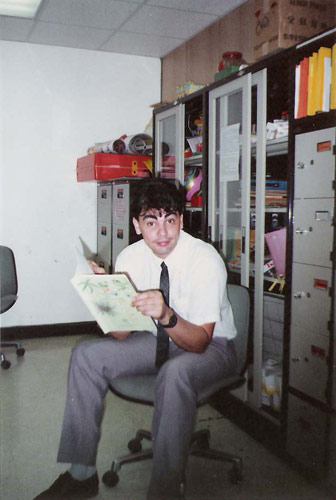 I arrived that night in Kutchum, to a panicked household. I had flown to Singapore, caught the train to Penang, taxi to Hat Yai, train to Bangkok, bus to Yasothorn, and pick up truck to Kutchum, to save 200 AU$ for my wife. I thought she would be pleased. I thought the impromptu visit would make her happy.

“What is he doing here?” questioned a tall handsome Thai guy I always thought was Latanar's sister's boyfriend.

“How do I know?” An agitated answer from my wife. Then the eye contact. The connection that said 'careful, maybe he understands'.

I was physically exhausted. I had only grabbed a few winks on the train from Hat Yai. I kept my happy face, showered and went upstairs to sleep. Under the mosquito net, I listened to the panic below until

I drifted off to sleep. My Isaan family talked on sitting on the raised wooden sitting area, under their wooden one room, no glass in the windows, wooden house.

I woke late, the house hotter than hell, I heard voices below and the sound of a meal in progress. I descended the stairs, put on my jandals, looked at the family and said, “Kin kow cup in yung?” (Forgive me if this is not correct – it's been a while.)

Latanar dropped her spoon. It bounced of the edge of her plate and onto the dirt floor below the seating area. As the bony dogs growled and licked it, my eyes returned to look straight into her eyes. It was over right then but we both didn't know it. It would go on through a type of emotional hell I have a hard time putting in words, until that phone call in 1992.

But perhaps I should start at the beginning?

August 1986. I arrived in Khao San Road for the first time. It was 10 PM and everything was shuttered up. A few stray dogs, and darkness. I peered out of the window and watched in horror as the taxi driver took my backpack from the trunk of the taxi and disappeared down a narrow alley. I chased him scared to death of losing everything my on first day but this taxi driver delivered me to a guesthouse. I think it's gone now, but in those days it was quite popular. Two Austrians were drinking beer at a table just inside the metal gate. Thirty minutes later I was squashed between these two guys, totally off my face in a tuktuk, heading for my first visit to Patpong.

Too bloody right you should continue. And from your lingo, you're a Kiwi, right? That alone is enough for a green star! Ok, not quite!