Faces of Laos – Meet my Pit Stop Crew, and Khamsone the Mediator

Intending to leisurely cycle around Don Khon, a touristy but incredibly scenic little island that belongs to the group of “4000 Islands” in the far south of Laos, just a stone’s throw away from Cambodia, I tell my boatman to pick me up in the late afternoon for the transfer back to my hotel. The bicycles that are available for rent for about one dollar per day have all seen much better days. I test-ride a few before choosing the one with the most reliable appearance and get on my way. On Don Khon there are no roads or anything like it. I ride on sandy trails most of the time. The further I get away from the island’s main village, the worse the trails become. There’s far less sand and a whole lot more rocks now, putting a significant strain on my rickety iron-donkey’s frame and particularly its old worn tyres. Eventually the inevitable happens. Going downhill I hit a large rock and hear a clanking metallic sound. Slowly coming to a halt I get off the bicycle and inspect the damage. Surprisingly my boneshaker’s old tyres have withstood the impact, but its chain seems to have jumped off the sprocket. Trying to put the oily chain back into its place I immediately notice that is hasn’t just jumped off. It actually broke.

“Oh great!” I’m thinking. Here I am standing now in the mid-day heat with my paralyzed iron-donkey on some more or less deserted trail in the middle of a secondary forest, miles away from the village, not having met a single soul for the last twenty minutes. Realizing quickly that complaining will not do anything to get me out of this uncomfortable situation I decide to continue following the trail rather than to turn around and push the bicycle all the way back where I came from.

Fortunately I don’t have to walk far. After less than ten minutes I reach the riverbank on the opposite side of the island and come across a small settlement. A sign written in Lao letters tells the name of the place. It reads Ban Hang Khon. As I push my bicycle closer a bunch of kids spot me and come running towards me screaming their lungs out with excitement. Glad that I have found a place to relax a bit that hopefully also has some cool drinks for sale I approach further. By now the kids’ parents have taken notice of me as well.

“It’s broken!” I tell them, pointing at my bicycle.

Two men come closer to take a look. The older one of them appears to be the head of the family, the younger one his son. They quickly assess the problem and without further ado lift the bicycle up, turn it upside down, and start working on fixing it. Everybody is all smiles and I’m invited to sit down with the family in the shade and have a drink to cool down a bit.

“Our family has seven kids!” the man’s wife explains. “Our oldest daughter is 17. We are already looking for a good husband for her!”

She winks and smiles at me. I turn and look at the rather pretty girl sitting at the other end of the table. She smiles at me shyly before lowering her head.

“Do you have a girlfriend?” the mother asks inquisitively.

“No, I’m too ugly! But your daughter is very beautiful!” I compliment her. “I’m sure you will easily find a good husband for her!”

She laughs out loud and then looks at me hopefully again. I ignore this completely.

In the meantime father and son have already finished taking the oily and dirty chain of the sprocket and are now trying to hammer the broken link back into its place using a simple rock and an unshaped piece of metal. All in all it takes them almost an hour until everything is back in its place. With dirty hands and sweating profusely, but at the same time with an expression of proud accomplishment on their faces, they put my bicycle back onto its tyres. But the job hasn’t been done yet. Dad still has to test-ride. Wearing his sarong he gets on the bike and starts pedalling down the path.

The chain has broken yet again. Father and son look at each other clearly taken aback, and then turn to me with an apologetic expression on their faces.

“Don’t worry! Have another drink!” the lady of the house encourages me.

It’s back to square one. Father and son get to work and start all over again. After yet another hour dad is ready for the second test ride. This time the chain doesn’t break. Visibly proud dad rides along the path and circles around the house. Mission accomplished!

Uncertain how to reciprocate their kindness I ask what I owe them for their help.

“It’s nothing!” dad says. “But we would be happy if you shared a beer with us!”

His wife gives a somewhat disapproving look. Still, I happily oblige and pay for two large bottles of Beer Lao for us that the family has in stock. Sitting together on benches under a corrugated iron roof father, son, and I are chatting while ceremoniously sipping from our plastic cups.

The beer seems to give dad a good buzz rather quickly. “He doesn’t have a girlfriend, he’s too ugly, what a piiiiity!” he rhymes melodically pointing at me with his cup and laughing.

His son tells me he spent years working construction in Bangkok and still does occasionally whenever money gets tight. Hence his good Thai. His dad struggles a bit more with the language, especially now as he’s getting drunk.

After some time I have to excuse myself as I know that my boatman will arrive to the island’s village again to pick me up soon. It’s 3pm now and the sun is burning down mercilessly. Getting back on my feet I notice that I am feeling quite tipsy myself from the drinks we shared. Given the fact that I usually hardly drink at all, and if I do only very little, that’s actually no surprise. I wave everyone goodbye, get on my bike, and slowly ride away taking a different path than the one I used to get here. It would be a shortcut back to the village, the family explained. What they didn’t mention was that I would have to cross a couple of decrepit wooden bridges, relicts of French colonialists who built a narrow-gauge railway across the island to facilitate the transport of lumber, in my slightly inebriated state. 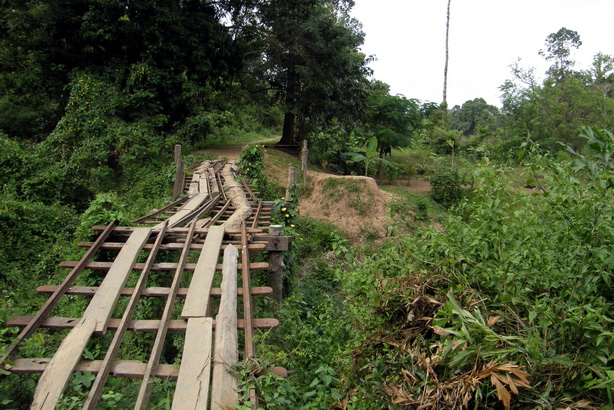 Back at the village I return my bicycle at the rental shop.

“Good?” the girl at the shop asks me with a smile.

“Very good!” I smile back at her brightly.

I arrive to Lak Sao, a small and rather grubby provincial town deep in central Laos, short after nightfall. From here it’s only another twenty kilometers to the Lao-Vietnamese border, but I am not heading that way. The city is dark and uninviting, an ugly blotch in an otherwise spectacular landscape. It’s one of those places where people rise with the first light and public life almost comes to a complete standstill right after nightfall. 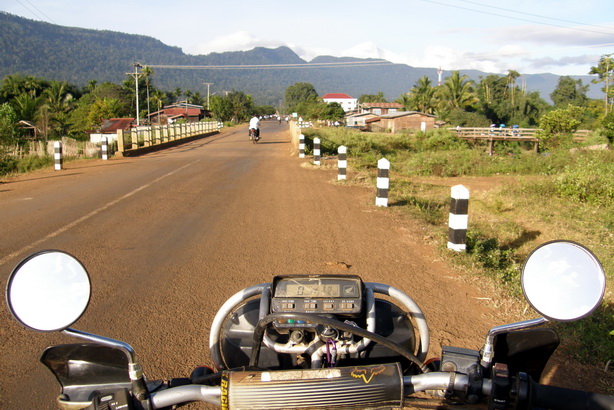 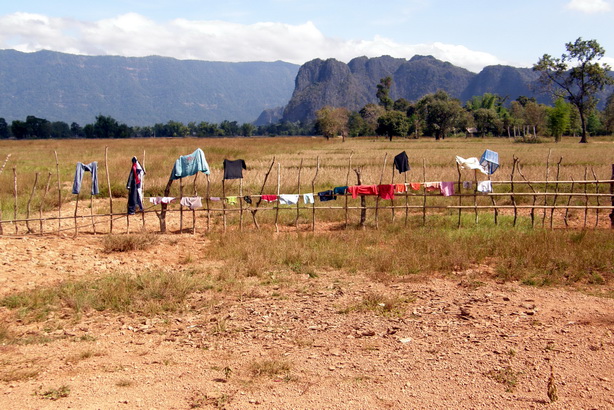 I’m freezing. The temperature has dropped significantly during the last hour and the effect of the wind chill while riding my Honda has made the cold only worse. I also feel quite sore after having gone more than 250 kilometers on the bike today. I pick the first guesthouse I spot near the town’s main junction and check in. It’s simple but clean, and most importantly has hot showers.

Stepping out to the main road in search of a bite to eat fortunately I don’t have to walk too far. There’s a small open air restaurant right next door. A very limited range of traditional Lao dishes are simmering on the open stove, flies abound. Besides me there is only one other customer, a skinny Lao man aged around forty. Watching me indecisively examine the mystery food in the pots he invites me to sit with him and offers to help with my order. I happily accept.

“My name is Khamsone” he introduces himself in perfect English and then places an order for preserved eggs over fried rice in my name.

Khamsone explains he has lived and studied in Russia. Besides English he is fluent in Lao, Russian, as well as Vietnamese. He comes across as an extremely bright and cultured character, but at the same time for some reason strikes me indefinably eerie in his demeanor.

“I spent some time in the U.S. too!” he says. “However, I prefer Russia. It’s less aggressive as a nation!”

I ask him what business he has in Lak Sao, assuming that a man of his disposition is probably not a resident of the town.

“I work for the government. My colleagues and I are responsible for managing the impact the construction of the large waterpower plants in this area has on people and environment. Basically we travel to all the far-flung villages and explain what the consequences of those projects are for the people living there. Most of them are clueless. All they understand is that suddenly there are no fish left to catch anymore in waters where they used to be abundant. Many of them are angry, even though they often don’t know where to direct their anger.”

He laughs. I am not sure how to take it. All I know is that the titanic construction sites to the south of town are badly marring the otherwise astonishingly beautiful countryside. 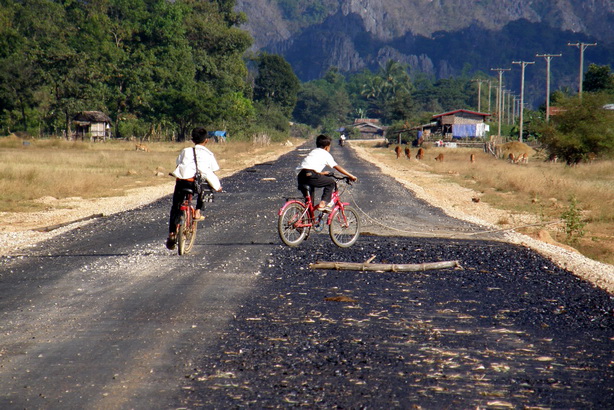 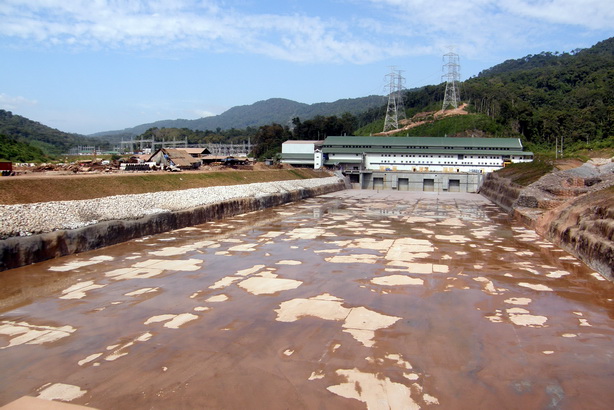 “You know, exporting hydroelectric power is one of my country’s best hopes for economical development” Khamsone explains.

After finishing our meal we walk back to the hotel together and sit in the lobby. A lone Vietnamese woman in her thirties squats on a couch nearby watching TV. Once in a while she picks up her mobile and types a text.

“This is Ms. Trinh. She’s is from Danang. She gives great massages. I usually hire her ever other day!” Khamsone informs me.

“Does she live in Lak Sao permanently?”

“Yes she does. She can make better money here than in Vietnam. A lot of truck drivers like to stop in Lak Sao in transit, especially now as we have so much construction going on in the area! I can well recommend her to you. Ms. Trinh sure knows how to treat a man!”

He smiles at me encouragingly.

You have a fabulous knack of capturing the nuances of exotic travel beautifully.

Immigration Department, Here We Are Again

Urbanization of a Karen Part II