Faces of Laos – Meet my Boatman, and the Soccer Crowd

From Ban Muang pier, approximately 25 kilometers downstream from Pakse, I charter a raft to take me to Don Daeng (Red Island) in the middle of the mighty Mekong. As there are no bridges spanning the river anywhere south of Pakse people depend on these makeshift, motorcycle engine propelled, catamarans to make it to the other side. Most of the time the boatmen transfer their passengers along with their vehicles all the way to the other shore. At times however they also meet up with another raft somewhere in the middle of the river and ask everyone to transfer to complete the trip. By now I have already become quite used to driving my motorcycle on and off those rafts that usually dock directly at the muddy riverbank. 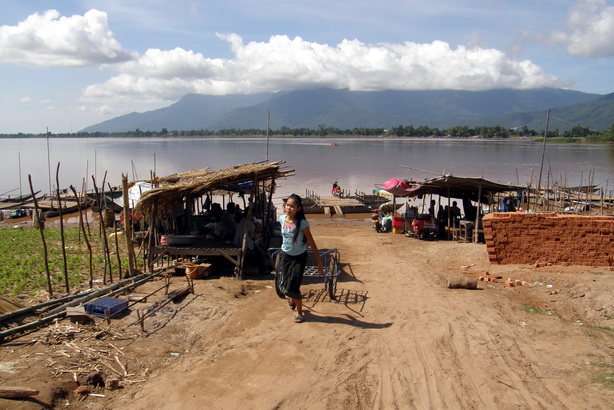 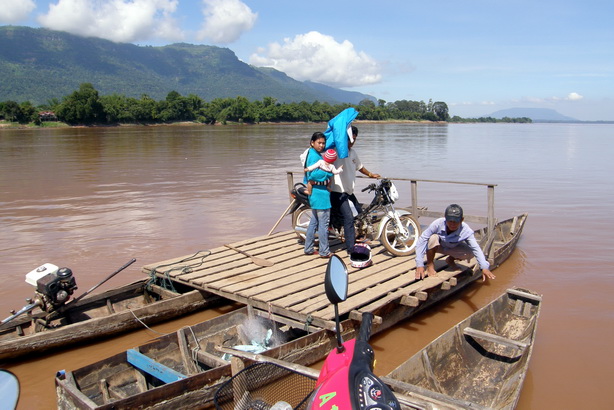 “Where is the pier?” I ask my boatman in Thai as he steers the raft slowly closer and closer to Don Daeng’s sandy beach.

“There is no pier!” he responds with a smile and reaches for an approximately five feet long and one inch thick narrow wooden board. The raft’s bottom hits sand and scrapes along a bit further before coming to a full stop about ten feet from the beach. My boatman takes the board and lowers the far end of it into the moving river while holding the other end in place on the edge of the raft using his left foot.

“Now you drive! I’ll be back in three hours to pick you up at this spot!” he explains.

The task of driving the motorbike down the plank into the Mekong and onto to beach is daunting. This is definitely a first. My old boatman smiles at me with the few betelnut stained teeth he has left in his mouth and a bemused look on his face. Clearly, now it’s all or nothing. I make sure the zippers on my camera bag are closed, wrap the whole thing with my rain jacket, and then put everything into my daypack that I carry on my back. Then I get on the bike, start the engine, and put it into first gear. Moving a bit closer to the plank on the unsteady raft I carefully open the throttle and accelerate down into the water. The rear wheel of the bike jerks violently from left to right and back as soon as it hits the sandy bottom of the river but I make it to the beach without falling off.

“Yahoo!” I shout with relief as I plough through the sand up to the tree line where a narrow path appears to be leading inland. 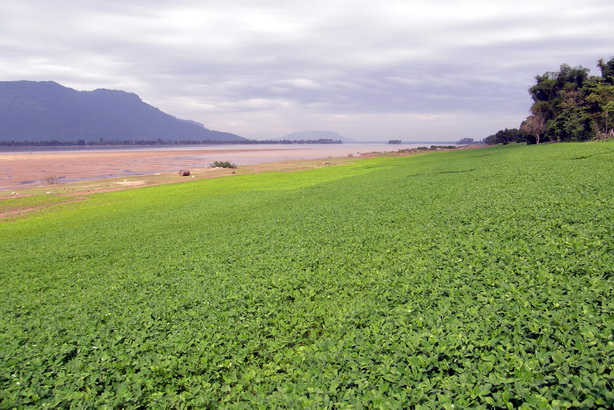 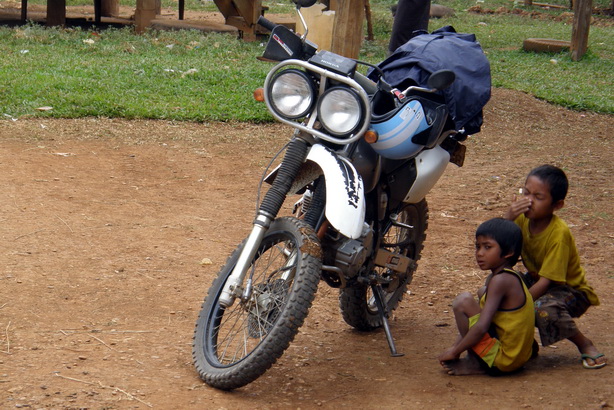 After spending the next couple of hours touring friendly villages and countryside on the approximately 6 mile long and 1 mile wide island I stop at its only accommodation facility, a newly constructed boutique resort right at the riverbank. It’s a rather upscale place featuring about a dozen nicely decorated and air-conditioned bungalows, an inviting restaurant with good views of the river and the mountains in the distance, and even a small infinity pool. In more than just one way it appears totally out of place on comfortably lazy and charmingly backward Don Daeng, yet still somehow manages to blend in nicely.

Walking into the restaurant with my dusty shirt and mud caked legs I earn deep bows from the immaculately tidy local staff and some funny looks from the group of elderly French package tourists that is just having lunch there.

I choose a table with a good view of the riverfront, lean back in the comfortable rattan chair, and start scribbling down some notes. The waiter approaches with the menu. The average entrée is 15 US$, a small fortune by Lao standards. Not feeling hungry yet I just order a mango smoothie for the handsome amount of 5 US$. 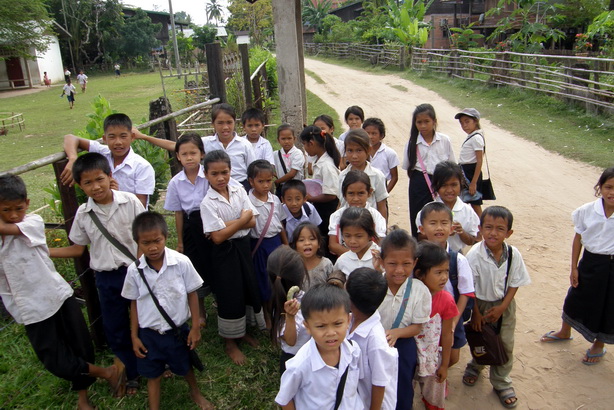 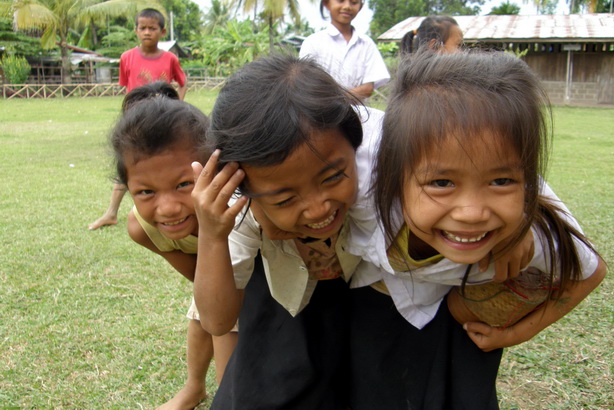 I meet the group of French tourists again an hour later back at the beach where my reliable boatman is already waiting as I approach ploughing through the deep sand. He’s in the company of a much younger guy I haven’t seen before. Both of them are waving at me from the distance.

The French are just in the process of dismounting a trailer that has been pulled down to the beach by one of those “engine on wheels” or “iron buffalos” that are so commonly used for all kinds of purposes in rural Laos. One after the other they then put on bright orange life jackets and walk down to the shore to individually sit down on chairs that are then lifted by porters and carried through the water to a waiting large raft. Their rickety raft is as basic as mine but ingeniously equipped with some benches for its passengers to sit on and a canvas top to shield them from the sun.

In the meantime my boatman has jumped into the river, already having put the wooden plank from his raft back into the water, and is signalling me that I can approach. Driving down that slippery board into the river was a daunting proposition three hours ago. Driving from the beach straight into the moving stream and up the narrow plank onto that shaky platform seems even worse. Without giving this too much thought and screwing up my courage I align my bike with the plank, open the throttle and quickly release the clutch. The engine roars and a fountain of sand disperses from the back wheel as my Honda Baja speeds into the Mekong. Water sprays in all directions and soaks my pants before the front wheel hits the plank and shoots up onto the raft. The rear wheel however jerks to the right just a moment before I reach the top and slides off sideways. Instinctively I pull the clutch and the front wheel break hard. With my legs already on the platform I try to support the not insignificant weight of the bike to keep it from falling off the raft and me with it, but it’s too heavy. Just as I feel how I’m losing balance and mentally prepare myself for keeling over into the river my old boatman stems himself against the back of the bike with all his strength. At the same time his young companion grabs the handlebar from the front and pulls. Together we manage to lift it up to the platform. What a thrill!

As I turn around I see the group of French tourists stare and point at us as their raft slowly floats away. Some of them have their video and photo cameras out and seem to have filmed my stunt.

“Thanks a lot!” I tell my boatman. “My luck you brought your friend with you to pick me up.”

“This is my son” the boatman says pointing at the young guy after climbing back onto the raft. “He saw me take you to the island. After I came back he said he wanted to come with me to help pick you up.”

“How nice of him! Thanks for that!”

“Actually he bet me one beer that you’d fall off!”

Leisurely riding my Honda Baja around Don Kong, the largest of the large group of river islands that go by the name Si Pha Don (“4000 Islands”) in the far South of Laos where the Mekong is at its widest, I pass what appears to be the local sports arena. A soccer game is taking place, and the ranks on the far end of the field are filled with people. I estimate their number at around 100. As I turn my bike around and drive closer I notice that it’s mostly students between the ages of fourteen to eighteen that are watching. The players on the field appear only marginally older.

I park my bike and walk closer, almost instinctively putting my right hand into my pants’ pocket to get out the magic props I always carry on me when I’m touring rural Asia and Latin America. Absolutely nothing beats showing off basic magic tricks to local folks to break the ice and make new friends, especially if a language barrier exists or people tend to be naturally shy.

A boy of around twelve years of age has already noticed the tall long-nose walking onto their playground and eyes me curiously. That’s my signal. Now that I already have his attention I quickly show off my first trick. The boy stares at me all saucer-eyed and gasps. He then suddenly starts shouting excitedly to all and sundry. I only catch a few words of what he is saying, such as “Foreigner” and “Magic”. The word spreads quickly. Within seconds the entire audience gets up and rushes down from the ranks like a human tidal wave, surrounding me. I don’t remember ever having gotten a reaction like that anywhere. Everyone smiles and giggles and points their fingers before eventually shouting “Do it again, do it again!”

It’s great fun. However, as much as I am confident with my magic skills I am also aware that they work best when the entire audience is facing me, and not surrounding me from all sides like the people are doing now. Also, the more eyes are watching, the greater the chance someone will find out about how my tricks work. Yet there is no way I can pull back now. Too high are everybody’s expectations. In the meantime even the soccer players and the referee have stopped their game and have come to join the show. 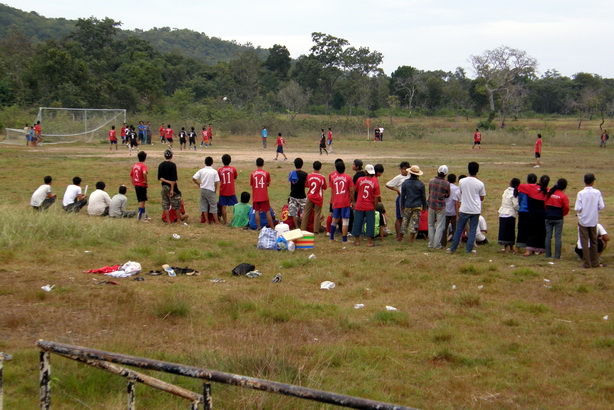 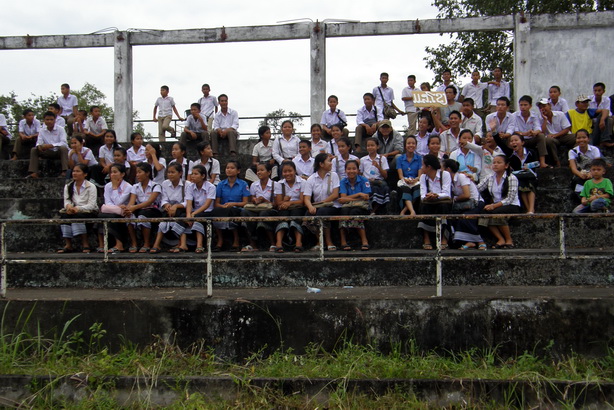 So I start showing off my entire repertoire of tricks, and to my surprise and relief nobody seems to discover how any of them work. They just can’t seem to get enough of them. The guys are clapping fervently, the girls are screaming, and everybody is laughing and cheering.

This moment becomes one of the best memories of my entire journey.

“I can’t! Pigs don’t fly!” I respond in Thai, much to the amusement of the entire crowd.

Eventually I stop and just smile at my awed audience until they all realize that the show has for now come to an end. The soccer players walk back to the field to slowly resume their game, and most of the spectators return to the stands. I am asked nicely to join by a group of giggling teenage girls. Sitting with them on the ranks watching the game a young boy with a box full of water and soft drinks comes by. I signal him as I’m quite thirsty and could use a drink. He calls something out in my direction that I don’t catch and walks on.

“Why doesn’t the boy stop to sell me a drink?” I ask the girl next to me.

“He saw you do the magic! Now he is worried you make his money disappear like you did with the other stuff before!” 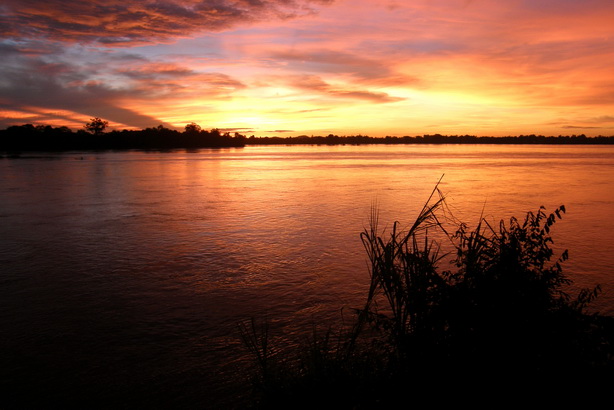 Faces of Laos – Meet my Pit Stop Crew, and Khamsone the Mediator

In Defense of Online Chat