I have been sampling and grazing around Stickman’s website for only a short while. I made the mistake when I first started of mainly reading many of the reader submissions. Those personal accounts really got me feeling depressed if not alarmed. So many train wrecks. Amazing. So much anger, frustration, bitterness. But luckily I found Stickman’s weekly columns and started reading them. I definitely recommend them as they were much more optimistic plus they are chuck full of valuable information. I love it when he spots a new girl at some bar and goes along the theme of “What is a good girl like you working in a place like this?” Indeed true. True of all of them not only the freshest. Want to open a gogo bar? His weekly articles are a gold mine of information. Want a successful relationship with a younger Thai beauty? I am sure your odds sky rocket if you carefully take note of what he says. Because I enjoyed the site so much I decided to toss in my two baht’s worth.

I found myself beached in middle age with a crash landing divorce under my belt and from the moment I stepped off the plane here in Thailand I was struck by how often beautiful women would look at me and smile. What a difference that was from where I came from! Where I come from I was invisible to pretty women. What is this place? Did I die and I’m walking around in another universe? I’m serious! It was such a shift from the laws of physics as I had known them. So, like everyone else I had little interactions and moments with these friendly women. Like a talk with the maid making the bed (how sweet it was watching her move and bend and stretch. “Darling, never mind making it up just climb in with me” I was thinking to myself as I watched her). Or a waitress that I gave a little tip to that broke into a big radiant smile, just for me. Try that in New York. Try that in Chicago. The laws of physics definitely have shifted.

Getting back for a moment to some of the bar girl bashing and rants against Thai-Western relationships I read on Stickman’s site (from contributors, not him). That sort of thing confounds me. Are these gentlemen serious! Did these middle-aged (plus, plus) men forget what a paradise this is? Already! They forgot how pretty women treated them back home? Well I haven’t forgotten and I hope I never forget. Stickman is as good a guide as you’ll ever get as to why these relationships capsize but from my perspective serious troubles in relationships seem begin when an older foreign man tries to convert his rented gogo playmate into a permanent exclusive sex slave. Call it anything else you like. A young fertile woman with a man that could be her father if not grandfather. To paraphrase Charles Bukowski: “The most obvious thing is the thing not being said.” One of the great gifts, great miracles of life is having your own children. A denture wearing, older beer loving guy may say: “Been there, done that, have them don’t need more, babe.” But Mother Nature is not so easily cheated. Should a beautiful woman end a few million year old unbroken chain for a balding, rounded older man that dropped in with a fistful of money? A man who figures it’s no big deal if her branch breaks off the family tree? And pile this with the problem language (“Talk? Who needs talk when we have ESPN on TV!”) and cultural barriers and sir in a wide generation gap. It can be done, a long-term relationship (Stickman can be a big help) but it is no surprise that success is rare and difficult. Keeping it sweet with short-time sessions and no heavy obligations is easily achievable. So when guys fail with young Thai women they intended to spend the rest of their lives with (“Yes, I can spend the rest of your life. I kill you now.”) They are understandably deeply wounded, outraged and embittered. Especially when he discovers there was a good amount of lying involved and despite all the money he has spent she escapes anyway!

Well, hello, that is what bar girls are and that’s what they do. They are actresses and they work hard at making any guy that sits with them feel special and in the bedroom feel young, strong, virile and handsome. That’s what older foreign men pay a fortune for. To be young, smart, handsome and 28 again. It is entertainment like theatre is entertainment or like going to a movie is entertainment. If you think you are Richard Gere and your Thai girlfriend is Julia Roberts go get your meds checked. I feel sorry for these guys because they wanted it to work out and probably are so alone and so badly hurting from bad past wounds, betrayals and disappointments. They came over here and let go of the rope and forgot to separate fact from fiction. They fell into their own wishful thinking. It is hard to blame them when you see how beautiful some of these women are.

Ok, back to my own experience. Sorry for about stepping into the role of playing the pontiff. I know bars in the red light areas of Bangkok are not the healthiest way to meet women but it is a fast lane for those with limited time. Especially for the touch-famished like me. When my departure flight was ten days away I didn’t have time to build a Statue of Liberty. Five minute chats with hotel maids wasn’t enough. Nevertheless it took several return trips and three years before I got the nerve to spend some quality short time with a pole dancer (you call that dancing?). Anyway, I found I could still ride a bike despite being long out of practice. It was wonderful. It was a revelation. How could it be so easy to achieve such intense pleasure? It got me started and I rode many pretty bikes. I was in heaven. I must be dead. Just, by way of comparison, from first meeting my wife until we were alone and naked together was a three year trail of gifts, dinners, airline tickets, thousands of dollars, bumps in the road and (wanting to do the right thing): marriage first. All to just have it crash and burn 19 months later. Plus the tar and feathering I got in Family Court. And now these beautiful women would let me have a heavenly ride so easily? If I liked a bar girl I could see her again and if the chemistry was wrong I could go on with no fuss, mess or late night arguments on the phone? (“But you fucked me. I let you have it. You owe me big time buster! What will I tell my mother!!”). Here in Thailand it seemed so clean quick and simple.

I think gogo bar owners vastly underestimate how intimidating these places are to newcomers. The sound systems alone with the pounding head banging kept me away for a long time. They should make easy ways to for first timers to dip their toes into the pools of ecstasy. <That's what beer bars are for – Stick>

I was sitting in one of the many King's Group bars over in Patpong one night and I saw something that moved me. One of the most beautiful women in that bar was a dancer named Gig. On this night a man rolled into the bar in a wheel chair. The guy wasn’t old but was in bad shape. Imagine someone that would remind you of Steven Hawkins. I think there was some talk between the girls which one would be willing to go with him. Gig took the job and got into her cute street clothes and just before going off with the man in a wheel chair she gave a big smile and a shrug to the other girls watching her. It was her job. And believe me Gig is seriously pretty. She did it. That lucky man. My respect for the work these women do went up to a whole new level. Goodness the men that get thrown at these young women. I am sure most guys are nice and some guys are extraordinarily generous. But then along comes a drunk, along comes a guy with a bad temper that is also prone to violence, another one that wants to work her raw or go in her live and doesn’t want to take “no” for an answer. Cock roulette. They put it in and pull the trigger.

Yes I had some of the usual troubles. I sent money to a woman named Noi that later proved to have several guys thinking they were the one and she was sweetly milking. I had a ride on a gogo girl that afterwards was proud to tell me she was a ladyboy. Boy I never went back to that bar. It’s not that I haven’t seen the scene. 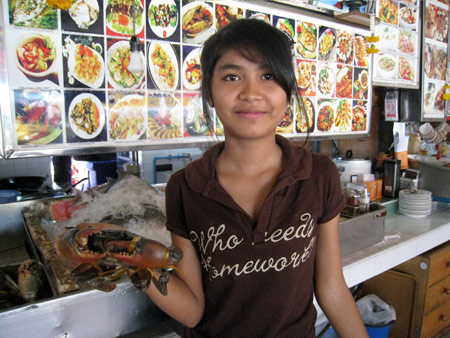 We all know but we must keep remembering that some of these women, many of these women, come from economic conditions so severe it’s enough to burn your eyebrows off when you see what little they got paid for all the hours of work they do prior to going to a gogo bar. I was recently speaking to a sweetheart of girl named Yok that is almost 16 (two weeks to go) that works 11 and 1/2 hours a day, six days a week in at the Caribbean food stand at the food court at Sukhumvit and soi 7 (near Nana BTS Station) for 6,000 baht a month (plus shared room and shared tips). She is a hard and good worker. So a girl like Yok that is so young, working such long long hours is heart breaking. It says a lot about why girls end up in gogo bars servicing old goats (like me). Yok comes from the poor city of Buriram. Many older girls from Buriram go directly into the bars. She came to the big city of Bangkok to try to get a footing. She landed in quicksand with her 69 hour a week job. How long will she be able to bear it? I say if women from poor cities like Buriram are pressured by forces well-fed foreign tourists can never fully understand to work in the sex service business it seems (my two baht’s worth) that these young women must be treated with the most respect and kindness. Most men do but some have gotten so grumpy and blistering in their judgments. I cannot ever judge harshly or ever condemn those that land in a tourist gogo bar. Being a bar girl is a boring job but a very difficult job when the task is at hand. The stomach is full the eyes are blind, Mr. Foreigner. I think if you can’t treat bar girls and think of them with heart felt gratefulness then by all means do yourself a huge favor and go back to your Western country and stay a long while until you remember how the pretty women treated you there. Then come on back. -Scott

It's Not Always About The Money: Part One

Was This The GFE Or Something Deeper?