Faces of the Philippines – Meet Samantha, the Inmates, and the Fools

I’m scheduled to meet Samantha in Manila on a late Sunday afternoon. I’ve never met her in person yet. After having been introduced to each other by a mutual friend we have spent the best part of the previous year exchanging emails on a regular basis. Judging from her messages Samantha made a very good impression on me right from the outset. She struck me as smart and worldly, not to mention well educated. Now being 28 years of age she had spent many years studying abroad, speaks five languages fluently, and heads the human resources department in her rich family’s manufacturing business. Knowing that I’d return to the Philippines this year it didn’t take us long to agree to travel together for a few days to find out if we would get along just as well in real life as we had online.

The plan is to spend the night at her best friend Destiny’s place and then catch a flight to our destination at 5am next morning. Destiny will join Samantha and me on our trip to Batanes, an extremely remote and often not easy to reach island group located close to Taiwan, far to the north of Luzon.

A few hours before I am supposed to meet Samantha she texts: “Flight for 2morow cancelled. We best all stay with my boyfriend outside Manila tonite!”

Samantha’s boyfriend’s name is Nestor. He’s around 40 years old, rich, and quite a character. He’s also supremely hospitable and generous. The four of us spend the next two nights at his fenced-off and heavily guarded resort-style luxury home in the highlands south of Manila. It’s a quiet place to live that doesn’t only offer fantastic views over the scorched plains below, but also has its own golf course, several swimming pools, country club, bowling alley, horse range, and lots more to keep even the most blasé person occupied. 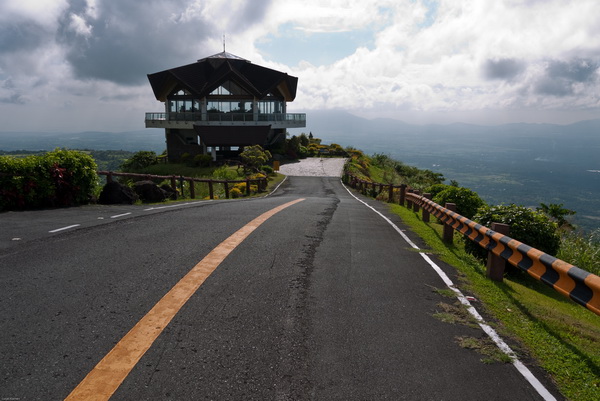 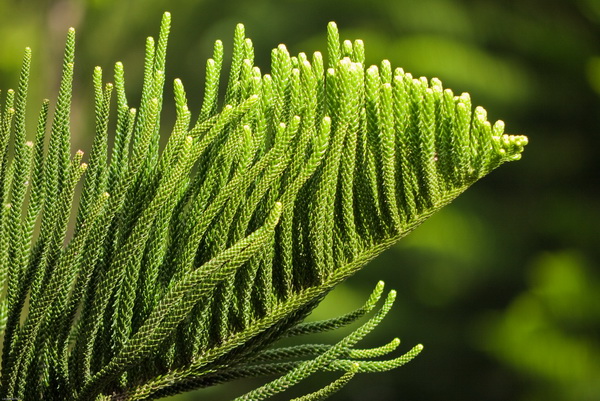 It’s obvious that Nestor is the kind of person who savors life. His house is clean, tastefully furnished, and very comfortable. Large yet unobtrusive modern paintings adorn the walls. A modest number of antiques are placed in all rooms, and most of the time soothing classical music wafts through the spacious living room.

Having arrived to Nestor’s home rather late in the evening and thus having felt too tired to have dinner the noise of my grumbling stomach wakes me the following morning. Nestor suggests we head out to have good breakfast. “What an excellent idea!” I’m thinking.

Ten minutes later we pull into the parking lot of the local branch of McDonald’s. Welcome to the Philippines.

Two days later we finally make it to Batanes. Unpacking our bags in our room I don’t fail to notice how both Samantha and Destiny pile half a dozen small packets of nutritional supplements on their bedside tables.

The following day we wake at 5am to reach the pier for the morning ferry over to Sabtang, a rugged island across a narrow strait from main Batan Island, in time. As we leave the lodge too early to have a chance to have breakfast the only option I am left with is to pick up some snacks at the tiny shop by the ferry pier. The choice is between instant coffee, sugary soft drinks, sugar-coated peanuts, and a large assortment of chips. The girls can tell I’m not happy. 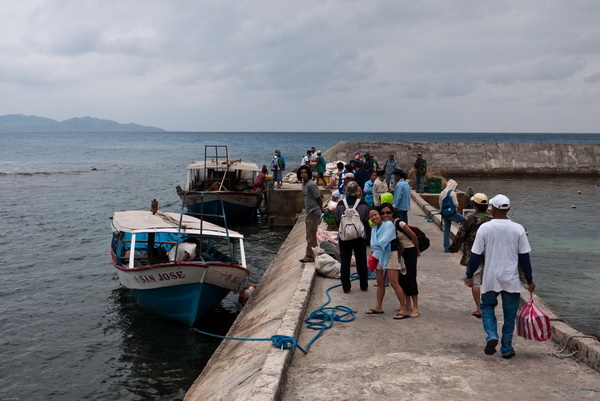 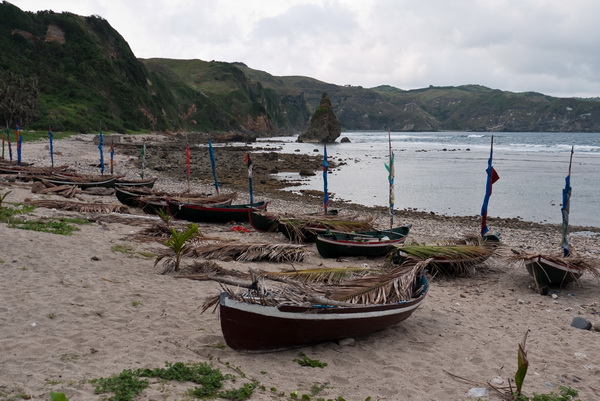 “Fear not!” they say. “We’ve thought of everything and brought some good healthy food with us we can share once we get to Sabtang.”

I take their word for it and only buy the peanuts.

A few hours later we cannot ignore our angrily growling stomachs anymore. The girls open their bags and each take out a bag of spongy-dry white bread.

“Yummy!” they say and smile.

Walking around central Basco, Batan Island’s small capital on a rainy afternoon I notice a group of men standing together in a small courtyard behind a chain-link fence. They seem to be in good spirit, smiling and waving at me. I pull a couple of props out of my pocket and perform my standard repertoire of magic tricks for them as I always do when I spot what looks like a promising audience. That sure does the trick. The men all howl, clap, and cheer with excitement like I usually only see from little kids. One of them even pulls a yellow hankie from his pants’ pocket and tries to emulate my magic in front of everyone. It’s only now that I notice the sign on the building behind them. 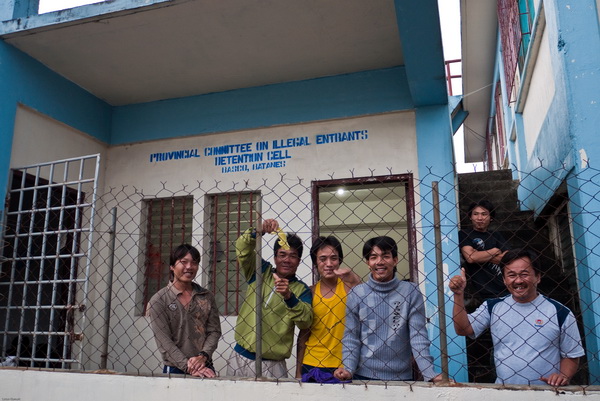 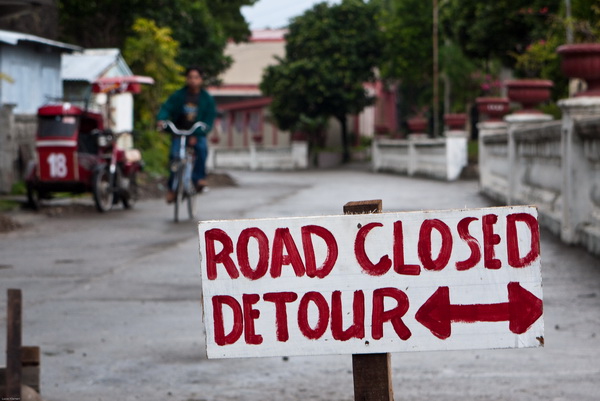 “Who are those men?” I ask a casual bystander.

“They are Vietnamese poachers” he answers. “They have been caught by our coastguard fishing illegally in our territorial waters a couple of weeks ago.”

“What will happen to them?”

“They have to stay put for a while and will then be put on trial for their crime.”

“Why hasn’t this been done already?”

The man laughs. “It hasn’t been done because there is no judge on Batanes. The fishermen have to wait until Manila decides to fly one in.”

“How long does that usually take?” I inquire further.

I arrive to Cagayan de Oro in the late afternoon after a thrilling speed-demon taxi ride from the airport at the outskirts of the city. The area of town where I’m staying is in brown-out at the time I settle in my hotel. As dawn descends onto the city its streets remain eerily dark.

Meandering through the darkness in direction to Divisoria, the city’s centrally located main drag, I witness how a man of about 25 years of age gets hit by a passing minivan not far behind me as I cross the street.

There he’s lying in the gutter now, moaning, while the minivan has already sped off around the next corner as if nothing significant had happened.

I watch as a friend of his or two and other bystanders immediately begin doing any sort of complete nonsense that I presume they have seen on countless TV shows involving giving first aid.

One yells at him while shining a flashlight in his eyes and moving it to various positions that the injured man is obviously supposed to somehow follow. Of course the flashlight is just blinding him all the while.

Another grabs his head and begins to wobble it violently in all sorts of contorted directions, apparently to ascertain if his neck is broken.

Others poke and push at him, and everyone is telling the poor guy to do this or that, in commanding tones at high volume.

Blood is running from his mouth and face.

One guy grabs the man's arm and wrenches him to his feet. He then begins to force him to walk around in circles as if he might be about to succumb from a drug overdose so that keeping him awake is absolutely essential.

“Has anybody called an ambulance yet?” I hear myself asking loudly.

“If we call an ambulance we might be held responsible for the costs!” they say.

Someone tells the injured guy that he should be angry at whoever ran him down, and incites him to start shadow boxing and swinging wildly at his phantom assailant.

That's when I walk off to look for a cold soda, remembering once more that after all I'm just a stranger in a strange land.

Very nice indeed. It sounds like the Philippines and Thailand have much in common!

Being Stupid in Thailand – Why Not?

Don’t You Just Hate It…