Walking into one of Mambajao town’s few internet shops on beautiful Camiguin Island, off Mindanao’s northern coast, I meet Ramona and Tahira. They run this shop in its Australian owner’s name, open daily from 8am to 8pm.

Tahira immediately catches my eye. She’s strikingly pretty with a rather petite but very shapely frame, long curly hair, and disproportionately large brown doe eyes. She smiles at me warmly.

Ramona on the other hand is rather unsightly. She’s the antithesis to Tahira, short, unshapely and chubby, with messy hair and a scruffy look. To me Tahira and Ramona are like day and night, sugar and salt, sex and celibacy.

Yet it’s Ramona who immediately takes a shine to me. As I sit down to check my emails and browse the internet for a lazy hour or two during the worst heat of the day she swarms around me like a bee around honey.

“Why don’t you do as Tahira and chat to five fat dudes from Scandinavia simultaneously while at the same time playing solitaire on the second screen and clipping your toe nails with your free hand?”, I ask her tongue-in-cheek while glancing over at Tahira who now suddenly looks extra cute with her face blushing slightly in reaction to my comment.

“Noooooo! That’s boring! I like to talk to yooooou!” Ramona croaks defiantly and unexpectedly hugs me from behind the chair. “You come to disco with us tonight, okay?”

“Eehm. Probably not! I have a massage appointment at my hotel at 09:30pm!” I tell her truthfully. “If I am still up for the disco I might show up later.” 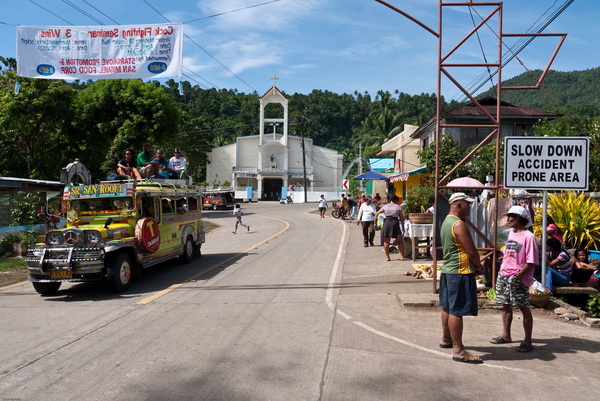 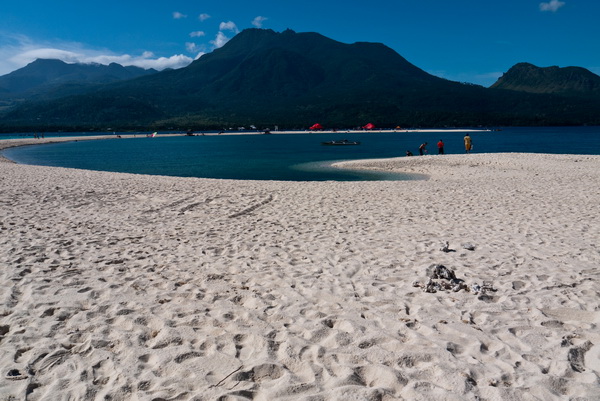 Finishing my massage at 10:30pm I text Tahira whose phone number I had willingly saved in my mobile earlier.

“Sorry girls. I’m too tired for disco. Maybe see you tomorrow at the shop. Good night!”

“Hi! Tis Ramona! It ok 4 u just 2 see u bcoz 2mrw we cant go out anymore just 2day even a minuts only? Can I com ur room? Sory am only flatered ur face.”

I write back: “Sorry but that’s out of question. Almost sleeping already! Have fun!”

Short before turning off my phone I receive yet another message.

“Hmmm. Pity. I wonder how it is I get pregnant tis month!”

Driving around Camiguin Island on my rented Honda I stop at the so called Soda Springs, one of many natural springs on this volcanic island that have been turned into recreational areas to be enjoyed by locals and visitors alike. After only a few minutes in the huge main pool a Filipino in his early twenties approaches…

“Excuse me, are you alone here?”

“How sad for you! Would you care to join me and my family so you at least have some company?”

The friendly guy introduces himself as Pedro and explains that he and his family are residents of this island. On the occasion of having relatives from Surigao City visiting the whole extended family has decided to spend some relaxed quality time by the pools.

Walking over to the party of around twenty people, young and old, I’m already eyed curiously.

“I’m Juan! You are welcome to join us for lunch!” Pedro’s father welcomes me enthusiastically, pointing at an array of food containers sitting on the table in the center.

A part of me was hoping he wouldn’t say that, but there’s no way I can refuse his generous offer and hospitality now. I pick up a bowl and fill it with some plain rice, greasy fried noodles, and a few pieces of chicken. The uninviting mystery meat in thick gravy that’s piled in the other containers I do not touch. 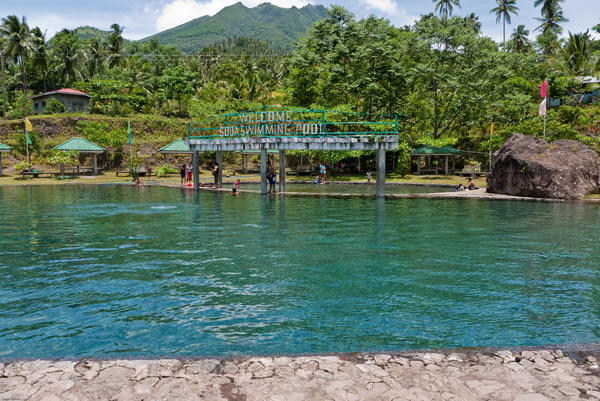 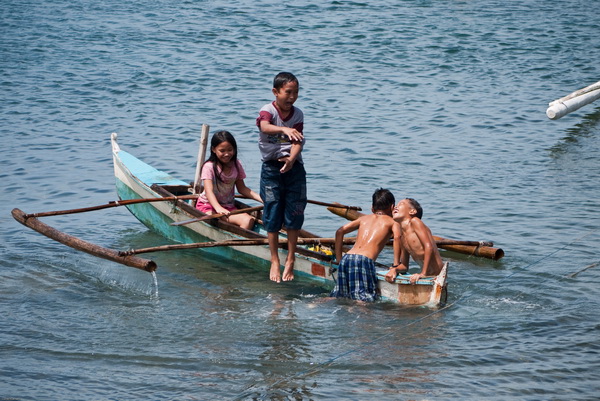 While slowly munching the contents of my bowl I answer the usual torrent of questions one always gets asked when meeting people in this country. All too soon it becomes evident that the family is probing if I’d make a good husband for Britney, the family’s 21 year old skinny wallflower daughter, who sits quietly on the other side of the table. She is clearly embarrassed by her family’s bluntness in finding her, and thus her whole extended family, a well-off provider from far-flung lands.

“Who cooked this delicious meal?” I ask politely in a feeble attempt to distract them at least for a moment from their mission.

“Why, Britney did of course!”

All fingers point at the poor girl who now blushes from head to toe. If this family only knew that even if I had only the remotest interest in their daughter their obvious white lie would have done nothing whatsoever to endear her to me.

After twenty more minutes of friendly small talk, many mutual smiles, and of course I taking photos with everyone in the family, I finally excuse myself.

That day alone I receive thirty text messages from both Pedro and Juan, asking me to join them for dinner, more hot springs, time at the beach, and more. The last message I receive short before leaving Camiguin is from Britney herself.

“Sorry friend! Have a safe trip!”

In transit from Balingoan town to Surigao City I have to change buses at Butuan, a grubby provincial capital on Mindanao’s northern coast. This being the beginning of the famously busy Holy Week in the Philippines with half of the country on the move the air-con Ceres Liner is packed like a can of sardines. Coincidentally I get to sit next to the only other foreigner on the bus, a pale, bald, tall, and heavy boned New Zealander of around 70 years of age.

“I’m Peter!” he says while offering his humongous hand for me to shake.

I learn Peter hails from the Bay of Plenty on New Zealand’s North Island and has for the greatest part been living in this relatively remote part of Mindanao together with his wife for the past 15 years. Only from early January until the end of March, when the constant rain can easily become intolerable for anyone who knows he has the opportunity to leave, he usually heads back to his native home.

“I preach! That’s my mission!”, Peter dryly informs me about his doings in the Philippines.

I am not surprised.

“Are you Catholic? Do people worship the Virgin Mary a lot where you hail from?” he adds with a strangely sneering expression on his face.

I ignore his question.

“You know, it’s absolutely lovely living here most of the time!” Peter goes on to say. “Especially the food! I think it’s the best in the world!”

“Yeah, right! The best of the best!”, I add tongue-in-cheek, thinking that despite his strangely gloomy aura Peter at least knows irony when it slaps him in the face.

But Peter is not joking, now thoroughly emphasizing the merits of Filipino cuisine to me.

Ten minutes later Peter gets off the bus, leaving me behind flabbergasted. I can’t help thinking that good Peter seems to be suffering from more than just one delusion.

A tricycle drops me off at Surigao City’s waterfront at 5am on a balmy Tuesday morning. My boat to Siargao Island is scheduled to leave in an hour. I buy a ticket and sign my name on the passenger list before walking over to a tiny Mr. Donut outlet nearby. A greasy donut and a cup of bad instant coffee is breakfast as good as it gets today. A string of Holy Mary’s blasts from the shop’s two large loudspeakers. The young male sales clerk quietly mumbles along.

Walking back to the pier I hand my big bag over to a porter who goes about to balance over the narrow plank onto the boat in order to stow it in its luggage compartment. As he returns I hand him twenty Pesos.

In this moment the sun rises from below the horizon, flooding the sky with bright orange light, forcing my tired eyes to temporarily squint. From the distance I spot a group of about 50 men, jogging in paramilitary style formation, approaching quickly. They are wearing a uniform outfit of short track pants and white t-shirts. They are also all singing call-and-response style. The man at the front initiates a line, and the remaining men complete it. This I only know from movies like “Full Metal Jacket”. 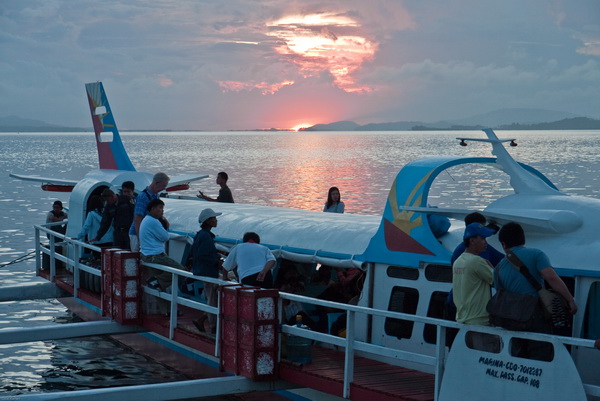 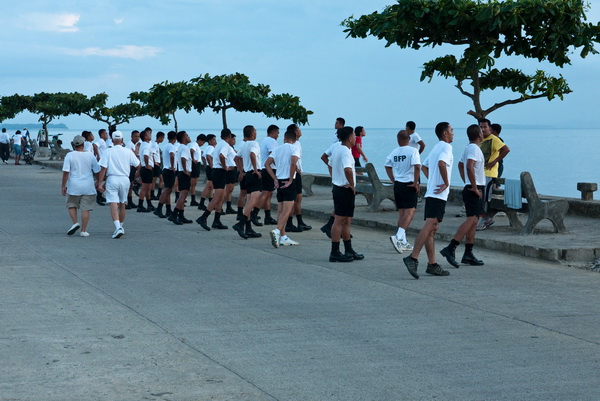 “Are those army?” I ask my porter.

“No sir! Fire Brigade! Sir, where do you come from?”

I tell him, expecting the full range of other usual questions that usually follow in its wake.

“Sir, I have a question, if you don’t mind me asking! It’s sort of personal! Do you mind?”

“Sir…Is it true that men in your homeland are not circumcised?”

30 texts in one day? That and the food are putting me off the Philippines!

Faces of the Philippines – Meet Samantha, the Inmates, and the Fools

Faces of the Philippines – Meet Andy the Gourmet, Victor the German, Darlene the Receptionist, and Cebu Pacific’s Check-In Staff