Last year I came to Thailand just in time to enjoy Songkran and before leaving home was told that to truly experience Songkran I should travel away from Bangkok so I made arrangements to travel to Surin and then on to the township of Lumduan which is about 25 km east of Surin to see what this festival was all about.

It took us 13 hours to drive to there and it seemed like half of Thailand was travelling that day. <Actually, about 3/4 of the country was on the roads – Stick> 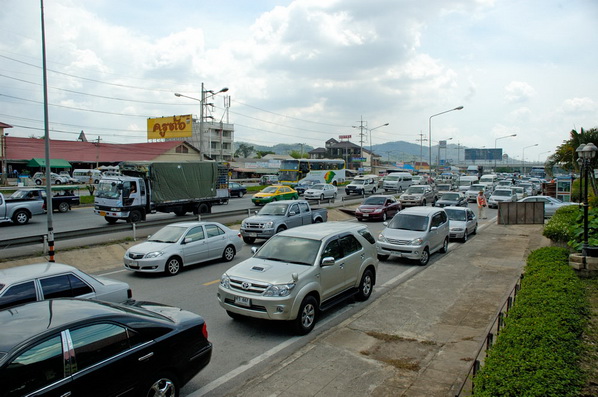 The Thai will cram themselves into any car, ute or whatever to get to where they’re going! 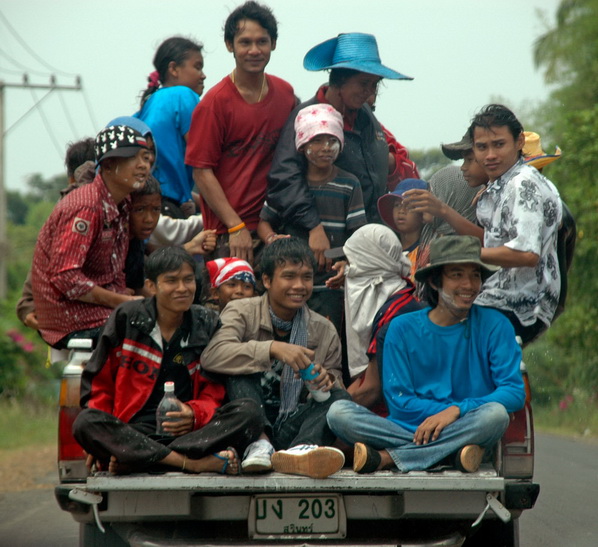 Songkran is celebrated every year in Thailand from April 13 to April 15. At this time many Thai businesses close up and the staff head back home to be with their families. Songkran coincides with the New Year of many other calendars in Southeast Asia. Songkran also occurs at the hottest time of the year in Thailand, at the end of the dry season and in the Isaan area it gets up to around 40°C.

Of all the feasts and festivals in Thailand, which are many, the Songkran Festival is the most striking, for it is widely celebrated not only in this country but also in Burma, Cambodia and Laos.

The most obvious celebration of Songkran is the throwing of water. People roam the streets with containers of water or water guns, or post themselves at the side of roads with a garden hose and drench each other and passersby. The throwing of water originated as a way to pay respect to people, by gently pouring a small amount of lustral water on other people’s hands or over a shoulder as a sign of respect. Among young people the holiday evolved to include dousing strangers with water to relieve the heat, since April is the hottest month in Thailand (temperatures can rise to over 100°F or 40°C on some days). This has further evolved into water fights and splashing water over people riding in vehicles, which sadly sometimes leads to serious road accidents.

Songkran was traditionally a time to visit and pay respects to elders, including family members, friends and neighbours. 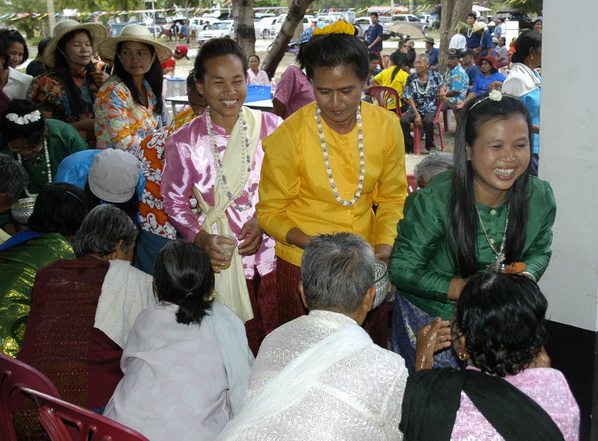 The elders also take time to bless the younger people. 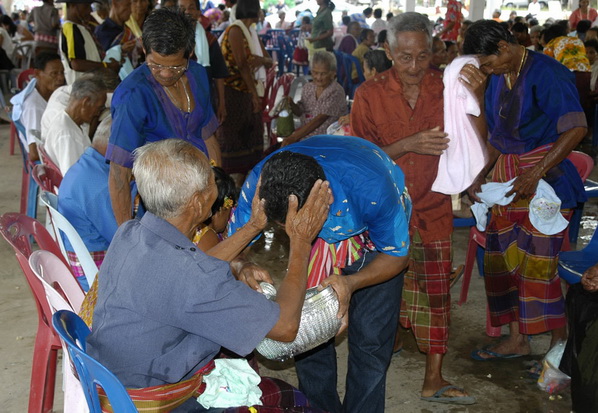 People celebrating Songkran may also go to a temple to pray and give food to monks. They may also cleanse Buddha images from household shrines as well as Buddha images at monasteries by gently pouring water mixed with a Thai fragrance over them. It is believed that doing this will bring good luck and prosperity for the New Year. 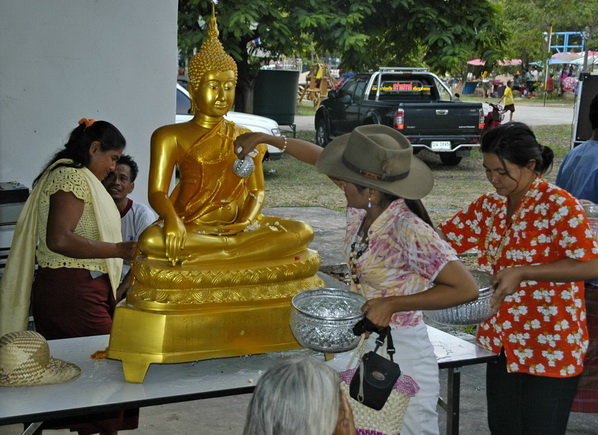 In northern Thailand, people may carry handfuls of sand to their neighbourhood monastery in order to recompense the dirt that they have carried away on their feet during the rest of the year. The sand is then sculpted into stupa-shaped piles and decorated with colourful flags. 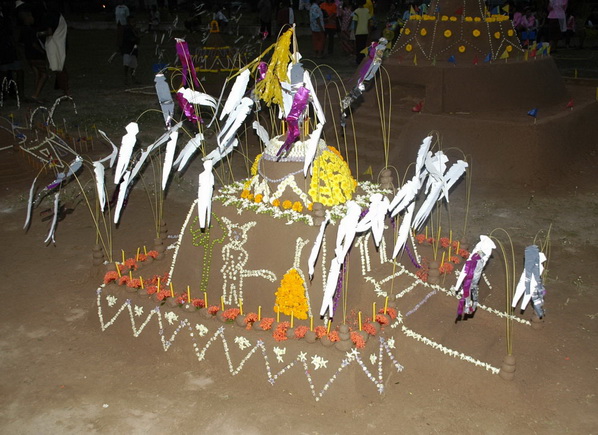 Nowadays though the emphasis is more on having fun and water-throwing rather than on the festival's spiritual and religious aspects.

This was something that the Mayor of Surin wanted to change in 2008 and he organized a huge display in the township of Lumduan to highlight the traditional ways that Thais use to do things. 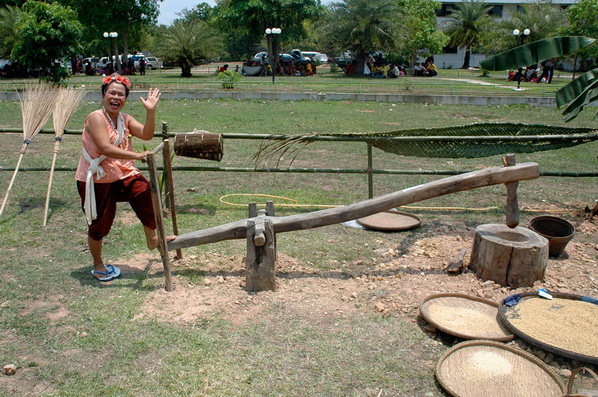 We arrive around 8 at night at my friend’s parents' house and after settling into one of the upstairs’ bedrooms and freshening up we went out for dinner.

The next morning when I woke up and went down for breakfast I noticed that my friend wasn’t there and her parents were the only ones here. Well they don’t speak English & I don’t speak Thai so after about five minutes of just looking at each other her dad pointed to a cup then to a coffee jar and pointed in my direction! Ok, yes! I want some coffee (we did this a lot over the next four days). When she came back she was surprised that I was already having breakfast and asked me how I did it, well it was easy. Your dad pointed at the coffee and I just nodded my head, after breakfast we had to get ready as we had to see the local people parade through town as part of the Songkran Festival. 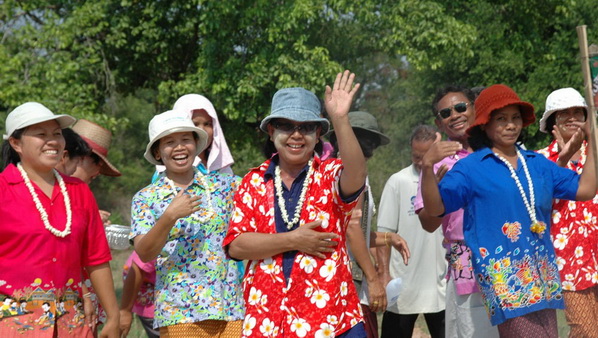 This was great to see and take part in, as everybody was smiling and laughing and having a good time. The parade ended at the town’s sports field, they’d set up large displays of how they use to do things in the past. 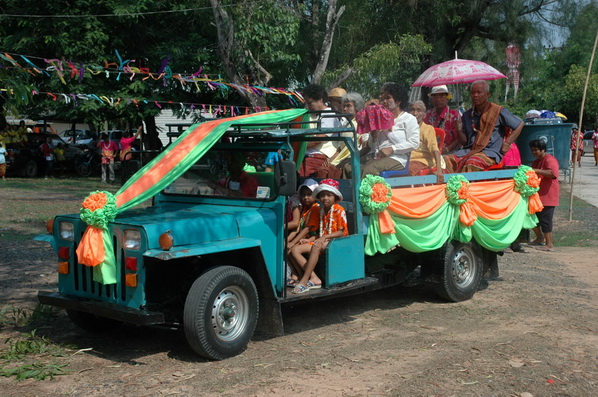 I had a great time that day and meet lots of people, but why do they play the music so loud! Felt like there was a jet taking off beside my ear all day.

There were some Thai men playing traditional music instruments and they were having a lot of fun! 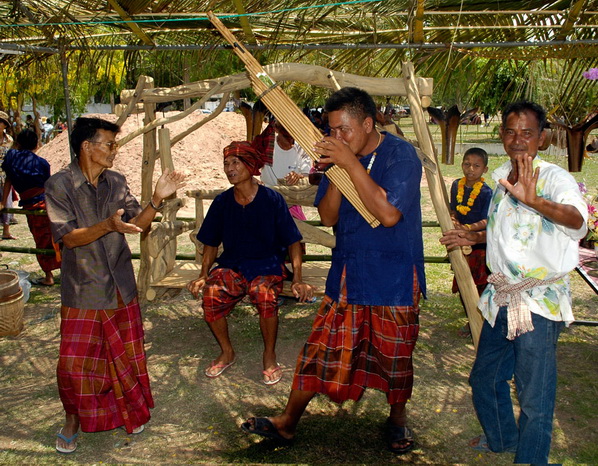 If you are invited to something like this then do participate in the festivities, the Thai will welcome your involvement. I like children and had a great time with them. This little girls name was Yu (you) and she had great fun placing talc powder on my face. 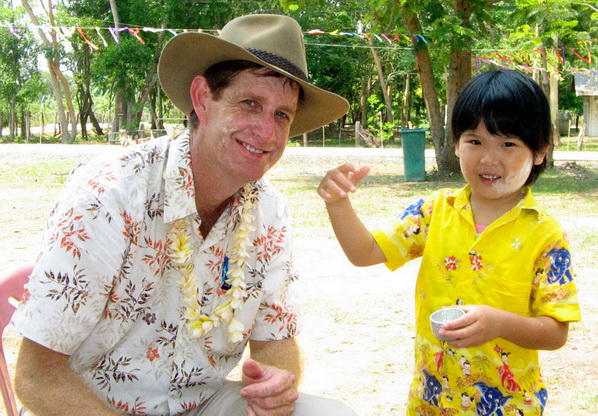 Yu and Garfield enjoyed taking me around the place and showing me everything there was to see. 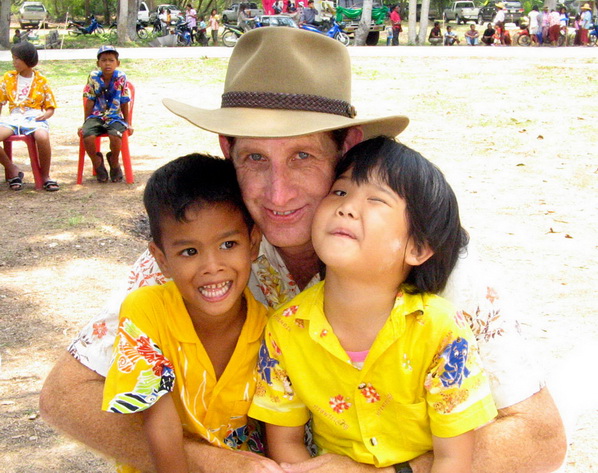 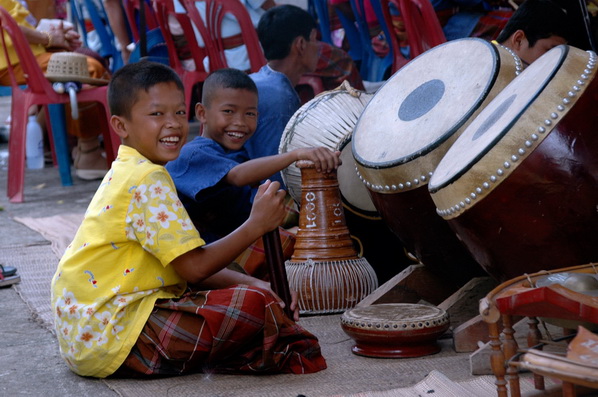 Songkran is sometimes the only time of the year that the whole family is together. This is four generations of one family. 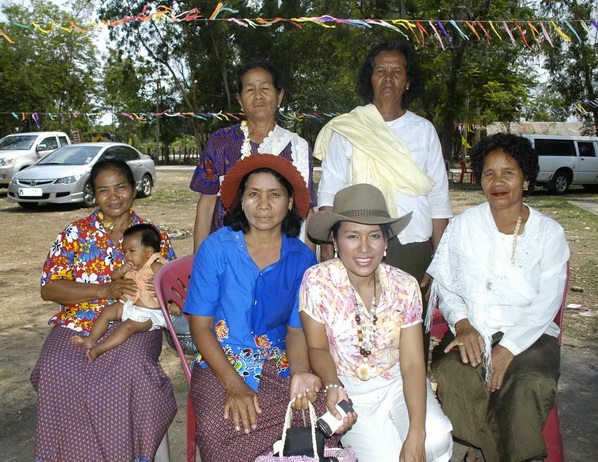 By late afternoon things were winding down and we went back to my friends home to freshen up. We were back there by 7pm to enjoy the night-time festivities. There were many performances for us to enjoy and the highlight of the night was when Miss Songkran 2008 lead the dancing! 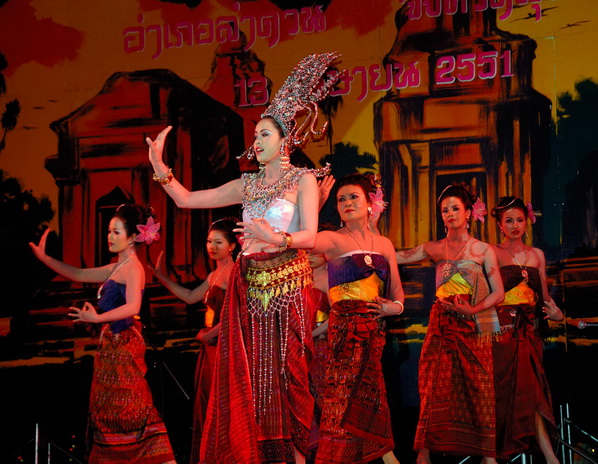 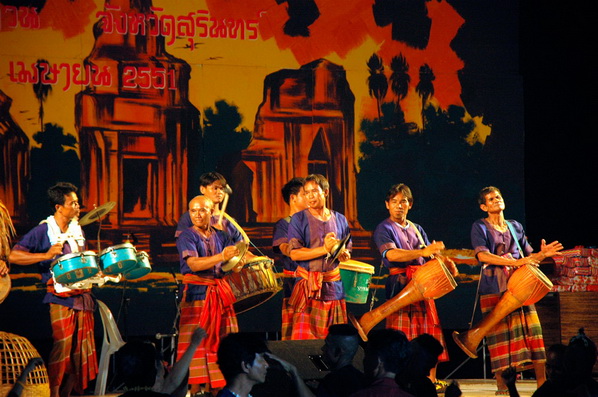 By 10pm everything was winding down and we went in search of my friends’ mum who was looking after her sisters’ young baby, who still looks nice at 55. 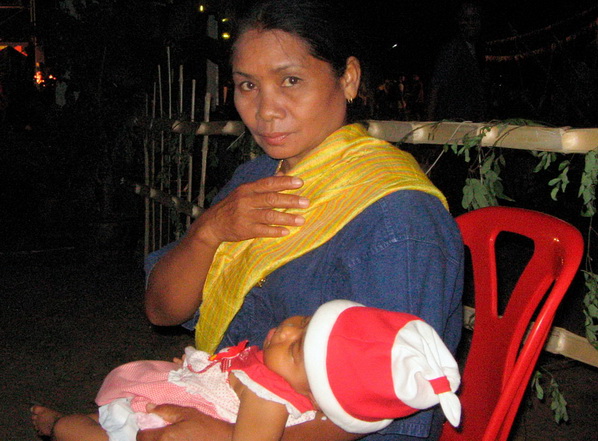 When we finally got home at about eleven I was stuffed so had a shower and crashed for the night.

The next day we went to see some of the sights around this part of Thailand and while travelling to the border of Cambodia meet some Thai’s having fun throwing water! 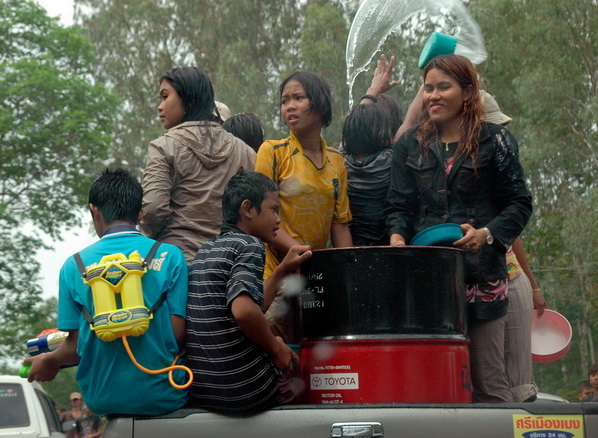 This is why I love Thailand. You cannot buy a smile like this young lady has! 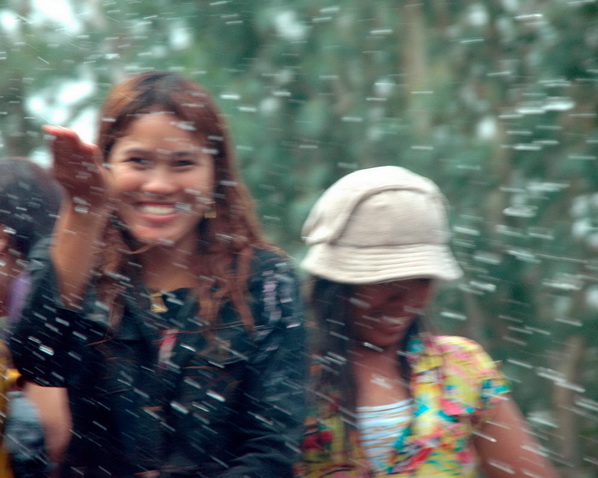 How many Thais can you fit in a ute?

There were 21 people in the back and 4 in the front!

To everybody out there Songkran is coming, enjoy yourselves and fun!

But as farangs, let try and behave a little bit and keep things in moderation!

I know I will!

Songkran in Isaan is much more fun than in the capital, that's for sure but to be honest, I find it tiresome and a dreadful intrusion on one's everyday life. Personally, I much prefer Loy Kratong. That's one Thai festival I really do enjoy.

Thoughts From A (Real) Friend Of Thai Girls