Visiting Thailand can bring many surprises. And the way you get these can be a surprising as well. In mid 2008 I got on to a 'meet Thai ladies' internet site, and there I . . . met Thai ladies. I'm not a bloke looking for a wife, what I was looking for was local talent while in Thailand who could show me around the area where ever I was at the time. I made this clear in my profile. I'm an old bloke so the youngest respondent I considered was 45 (!). One surprise is that there are plenty of women on sites over 45 years, some way over. After many emails, chats, and culling I arranged to meet several of these women in their own localities. I've been to Thailand several times previously (although not into country areas) so was familiar with the system and how to handle myself (i.e. carefully). My intention was to learn as much as I could about life in the 'real' Thai world out there, as distinct from BKK metro.

The first of these people turned out to be the most full on. S was a person about my age (I've seen 60) and I organised to meet her at Udon Thani airport. I didn't expect a posse of 4 to be waiting for me: S, a daughter, a friend, and a 'nephew' to help with the language problem. There was also a driver for the small bus (hired) that was to take us to the town where they all lived about 70 km out of 'Dontan. It felt a bit like a kidnapping but I was there to experience it all and it didn't seem to be life threatening!

We arrived home and I was installed in the room under S's house, a somewhat shambolic and poorly maintained place with minimum security. First impressions did not impress too much but it was evident the woman had money and kudos. Later my expanded knowledge showed her to be a matriarch with quite a presence in the town. Behind that house a niece and family lived (in a much more presentable place). Family members were often blowing in and out.

I stayed there a full week and during that period I was shown her land (several plots), and her 'salt factory'. I was taken to two events in the town, and was taken also to Laos for a visa run. There were no requests for money and when I did try to pay it seemed to be viewed with some humour.

Usually the transport was in one of two vehicles (poorly maintained 4WD ute things Thais love so much, actually the rest of the world loves them too) and the driving was done by various people (including me), one of whom was an unlicensed youth who had to swap with a licensed driver at the many police check points we encountered (this was done in full view of the police just up the road – no attempt was made to conceal the swap!). Usually there were at least 4 people in the car.

The salt factory was presumably a major contributor to her wealth (but I really can't judge as I have no idea what rent she received from the land, and on one block was a fenced off telecom tower from which I presume she got an income). Underground around this town there is available an aqueous solution loaded with salt (and who knows what else). At the 'facility' I visited, the liquor was forced out of the ground by pumping air down there, piped to large vats where the water was evapourated by lighting a fire underneath, the salt scraped up and bagged ready for sale. Some other enterprises in the area relied on the sun to evaporate the liquid, meaning large 'salt pans' were a feature of the outskirts of the town. Not an attractive look in fact.

The pic below shows the hi-tech pump house – the thing did actually work! If you don't see the safety equipment (belt guards etc) that's because there is none. 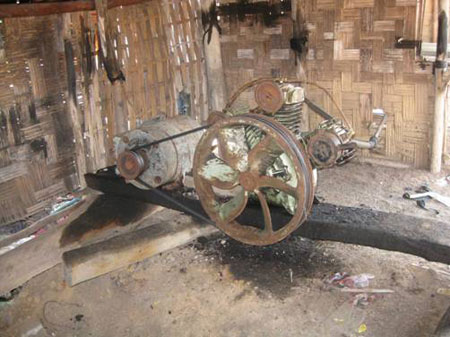 Below we see the pipe work which brings the solution up. Nice tidy setup. 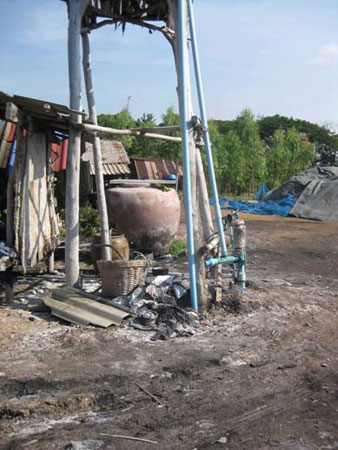 A vat with a wood fire . . . several vats were bubbling away, rice husks were used as fuel as well. 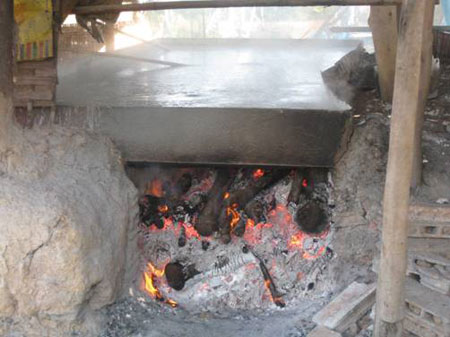 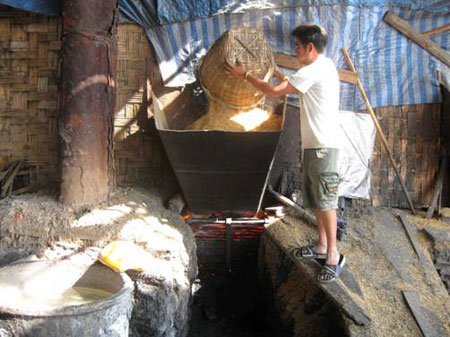 Why did the place not burn down? Beats me.

During heating you can start scraping up the salt . . . 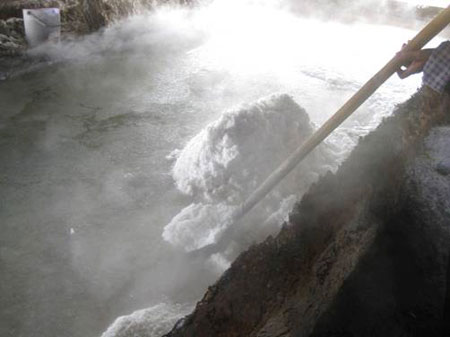 And bag it. 10Kg per bag, give or take a little, no scales here. 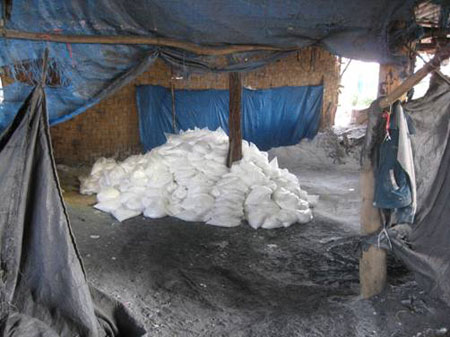 Transport to your customers (I have no idea who they might be) needs a truck. Oh good, here is a genuine Thai model. 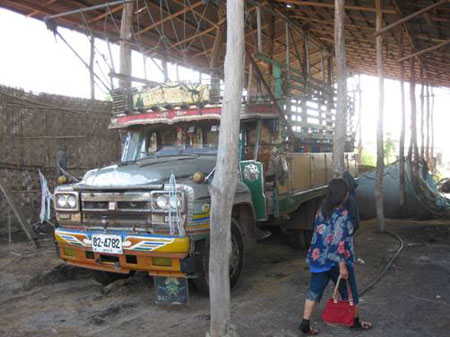 S employed about 8 workers in this place – visitors from Laos – they had to live somewhere and it happened there was some very comfortable accommodation on site – handy that. TV included no extra cost. 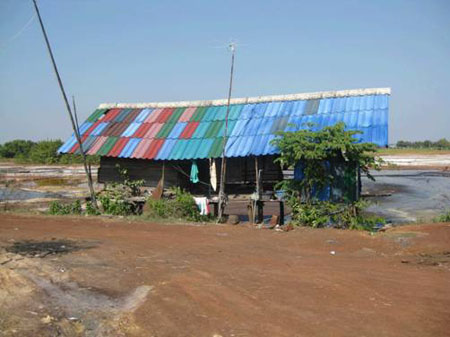 A general view shows the main work area. Rice husk stockpile on the right and a Lao man hard at it on the left. The black piles are ash from the fires and this was also bagged and sold to market gardeners. 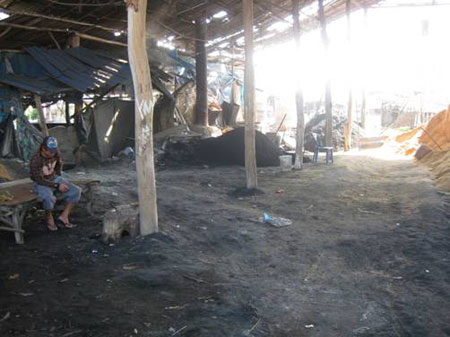 By roadsides in and out of the town you could see stalls selling bags of salt, but I never saw a bag actually being sold.

The first event I was taken to was the Wednesday November 12 evening party, the second part of the Loy Krathong festival – where honouring the river (in this case a large dam) happens. It was a huge event with eats, beauty pageants, music of course at top volume, and launching lanterns and the banana leaf floats. S had reserved a spot inside the rope, (all the unwashed were outside the rope) and the family arrived with mats, food and drinks, and lanterns and boats. The husband of the niece living next door was MC and the show was the usual Thai event – great.

Below, the banana leaf floats primed and ready to launch. When you are about to launch them you light the incense and bless the river, apologising for the mistreatment you have metered out to it in the past year, and promise to try better in the coming year. These boats are easily made, the body being a 50mm thick slice from a banana tree stalk, about 150mm diameter, then using pieces of banana leaf cut to size and folded, you pin it all together with toothpicks or matches, adding flowers etc for decoration. 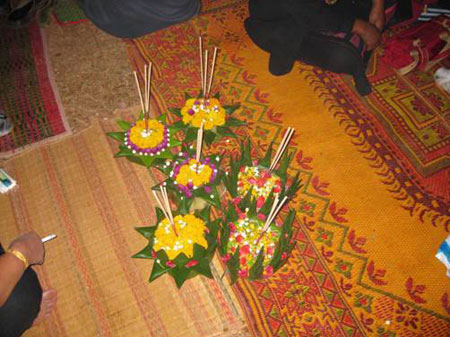 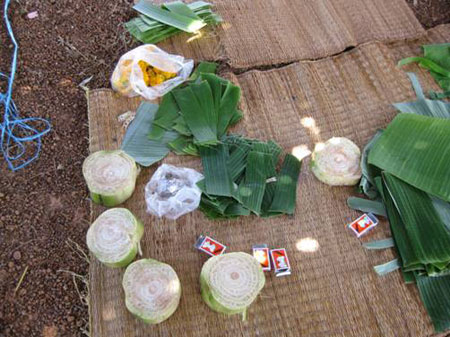 And how about the deluxe model! 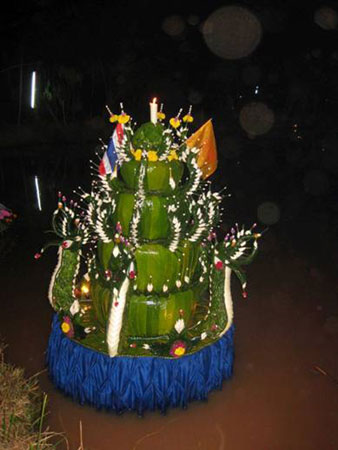 Lanterns being launched. They don't worry about wildfires here! 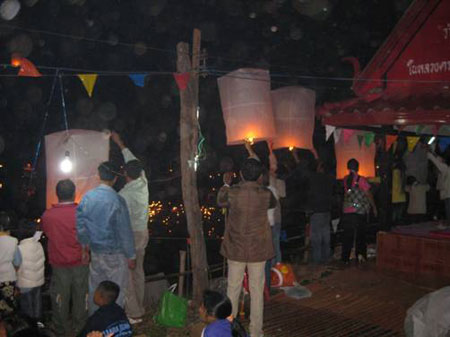 Later on the beauty contests started – long events these with around 60 ladies in the main event, and they are each allowed plenty of time to parade, speak and receive flowers. 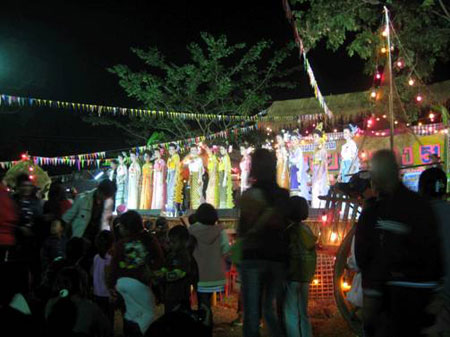 The second event I was invited to occurred on Saturday, November 15, 2008 – an auspicious day for all of Thailand. That day the King's sister was buried, and many ceremonies were enacted throughout the Kingdom. I saw no other farangs at this event, hard to estimate how many Thais – plenty (as in practically the whole town). Yes, I did get a few funny looks. A friend of the family (D, a restaurant owner) was one of the several people providing free food, and I witnessed much preparation of the food on the Friday prior and long into that night. As you can imagine, the food was very popular, after all this was a top quality meal costing nothing, and you could have seconds too. The masses of school kids went for the food in a big way. That day the commercial food stalls were out back behind ropes and did very little business.

D's stall. Several big tubs of noodles, others of soup, pork, pork balls, sprouts and other fine food was provided. It all disappeared rapidly. 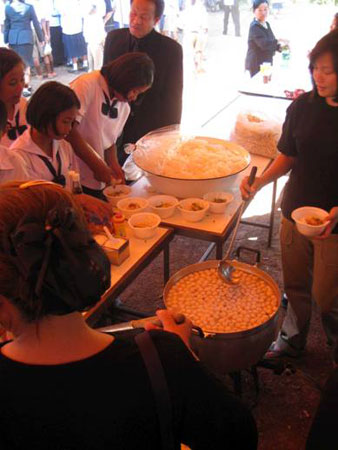 The Visa Run was not much more than a pain in the arse, but at least that time I got 30 days on my return from Laos. Later in December the same thing got me only 15 days – boy, was I pissed off. The pic shows the friendship bridge – paid for and built mainly by Australia – I asked a couple of Thai people if they knew that – the unanimous response was blank looks. Hey, look it up on Wiki. However it was great to see the mighty Mekong for the first time- I wish we had a river like that in Oz, and interesting to see how poor Laos looked in comparison to Thailand. 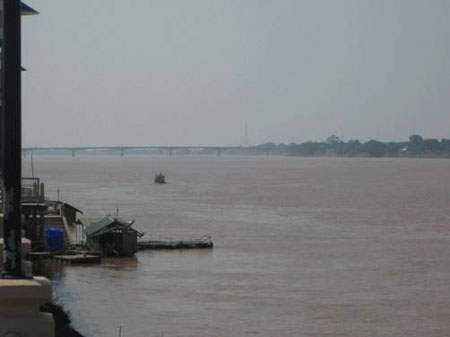 I drove back from the visa run to Nong Kai because on the way up the clutch decided not to disengage and the (licensed male) driver had no knowledge about how to coax the vehicle back home. The cause of the problem was that the master cylinder had lost its cap a while back and a plastic bag had been used to cover it – sealed with a rubber band (a master cylinder must breathe the system to work properly).

That was the first time I had driven a car any distance in Thailand and most of the trip was at night – bloody scary. The vehicle had pathetic lights, which meant that motor cycles without lights suddenly appeared from nowhere, pushbikes without lights suddenly appeared from nowhere, buffalos the same, and tractor trailers same again! And half of those travelling the wrong way on my side of the road as well. B’jesus, scary stuff! I drove very slowly.

One day I was at D's restaurant and heard an approaching ruckus, soon enough the source was evident – the drive-by monk mobile. Bit like the (very annoying) ice cream vans at home, but in this case you rush out and pay your respects, gain a few credits, and hand over some cash! Make sure to step out of your shoes. 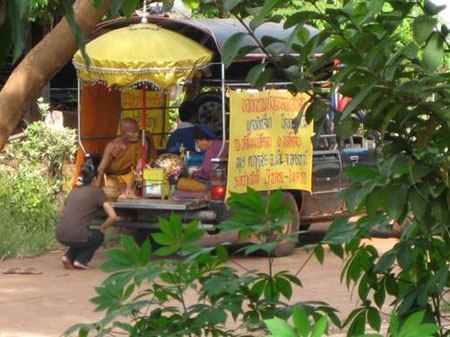 So, in summary, I found all sorts of interest I had no idea I was going to find when planning this trip, and I'm therefore greatly indebted to that family. All of the above was the result of being prepared to choose an unlikely respondent, then just showing up and seeing what transpired. Give it a go if you want more than just . . . mongering!

I found plenty of interest in other places later on as well. I'll cop ya’ later about that!

I am sorry but I am away from Bangkok and seriously pressed for time so no comments.

My First Trip to LOS, (Part 5) Prologue to Relocation